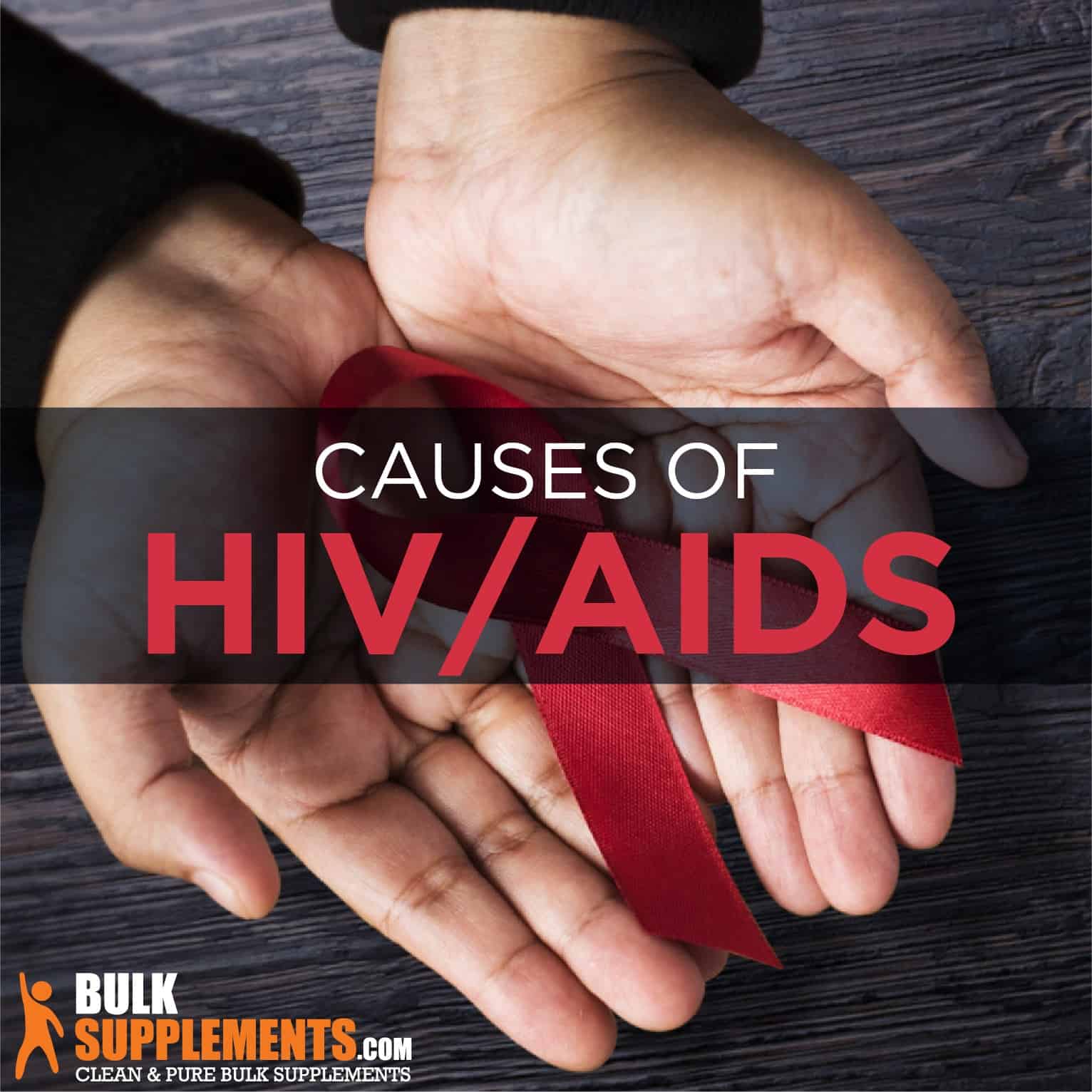 HIV/AIDS is a sexually transmitted infection that attacks a person’s immune system. While in the past, people used to refer to HIV/AIDS as two separate diseases — HIV and AIDS — that’s no longer the case. Thanks to research and increased HIV awareness, it’s now well understood that this is a single infection.

HIV stands for human immunodeficiency virus. As the virus damages a person’s immune system, the infection can get worse until the patient has AIDS (acquired immunodeficiency syndrome). Just over 1.1 million Americans are currently experiencing some form of HIV infection. Of those, an estimated one in seven are not aware that they’re infected (x).

The structure of the human immunodeficiency virus is a bundle of genetic material enclosed in a spherical protein shell. The genetic material of HIV consists of tightly bundled amino acid strands called RNA. When this RNA is injected into a host cell, it uses that host cell to produce more copies of the HIV virus until the host cell is destroyed. Unfortunately, HIV’s favorite host cells are white blood cells, the same cells your body uses to fight disease. This is one reason HIV has been so difficult to treat.

Notably, this list does not include saliva. As a result, it’s impossible to spread HIV through ordinary, everyday physical contact.

Finally, an infected mother can give HIV to her child. This can happen either during pregnancy, because of blood exchange through the umbilical cord, or after pregnancy due to HIV-contaminated breast milk.

There are two strains of the HIV virus — HIV-1 and HIV-2. About 95 percent of current HIV patients worldwide are infected with HIV-1, while HIV-2 is found primarily in West Africa, although it’s starting to appear in other parts of the world. While both strains have virtually identical effects, there’s a key difference between HIV-1 vs. HIV-2 that explains why HIV-1 is more prevalent. For reasons that aren’t yet fully understood, HIV-2 transmission rates are 5 to 10 times lower for heterosexual sex, and 20 to 30 times lower for mother-child transmission. As a result, HIV-2 has not spread as quickly through the population (x).

As an HIV infection progresses, a patient will experience different symptoms depending on the phase of the disease. There are three primary phases — acute HIV infection, chronic HIV infection and AIDS.

Acute HIV infection occurs about 2 to 4 weeks from the time a person is first infected with the HIV virus. During those few weeks, the virus is just beginning to multiply, and there are no symptoms. At that point, symptoms will begin to appear. They include:

As you’ve probably noticed, a lot of these symptoms look like a bad case of the common cold. The main differences are the mouth ulcers and rashes. The characteristics of HIV rash are flat, red blotches that are generally covered in smaller red bumps. These rashes can be innocuous, or they can be very itchy. While they’re not generally dangerous, they’re a key indicator that a patient should be tested for HIV.

After the initial acute HIV infection, symptoms can disappear for up to 10 years. During this time, the virus continues to multiply in the blood, and the patient continues to be contagious. For some people, symptoms may reappear for short times at lower levels. For others, there are no symptoms at all.

Chronic HIV symptoms in women can include menstrual irregularities, including a period that’s lighter or heavier than usual, out of rhythm, or doesn’t arrive at all. HIV also puts women at a higher risk of pelvic inflammatory disease (PID), an infection of the uterus, ovaries and fallopian tubes. In women with HIV, PID can be more severe and take longer to treat than it does for HIV-negative women.

In most cases, chronic infections can be managed with anti-retroviral medications. However, when left untreated, the infection almost inevitably leads to AIDS within about 10 to 12 years.

AIDS is the final stage of HIV infection. Technically, a patient is diagnosed with AIDS when their CD4 T cell count drops below 200. This typically happens after 10 to 12 years of HIV infection. The CD4 T cell is the specific type of red blood cell that’s targeted by the virus. When a person’s count drops below 200, their immune system is severely compromised, and they’re vulnerable to a number of infections that are called “opportunistic infections”. These are infections that might be a mild illness for a healthy person, but can be deadly for someone with AIDS. AIDS also makes a person vulnerable to some cancers that are otherwise very rare (x).

When an infection has progressed to the point of AIDS, a person experiences additional symptoms. These include weight loss, intermittent fevers, chills, night sweats, extreme fatigue, persistent swelling of lymph glands, persistent diarrhea, sores on the mouth, anus and genitals, pneumonia, memory loss and depression.

The main danger from HIV isn’t the disease itself. Rather, it’s the complications of it that can cause the most harm. Here are a few of the dangerous conditions that can result from an infection that’s progressed to the point of AIDS. Because of these complications, AIDS life expectancy is only about 3 to 6 years, although some people have lived for decades with proper care and treatment.

The primary risk of AIDS is infection with another virus or bacteria. Without enough CD4 T cells, these infections can become life-threatening. They include tuberculosis, cryptosporidiosis, cytomegalovirus and toxoplasmosis. Less exotic infections include cryptococcal meningitis, other STIs such as syphilis or gonorrhea and even run-of-the-mill urinary tract infections.

One complication that deserves special mention is pneumonia. AIDS and pneumonia together present a significant risk to a patient’s health, since fluid builds up in the lungs and the patient is ultimately unable to breathe. This is particularly problematic because pneumonia is typically caused by a case of the common cold that develops into bronchitis. This puts AIDS patients at risk even from a simple seasonal cold.

AIDS patients are at increased risk of a cancer called Kaposi’s sarcoma. This is a cancer of the blood and lymph nodes, and it’s caused by a virus called HHV-8. Healthy immune systems are able to keep HHV-8 under control, but AIDS patients’ immune systems are unable to keep up. As a result, they can develop Kaposi’s sarcoma. Another major cancer risk for AIDS patients is lymphoma. This is an aggressive cancer that requires aggressive treatment.

Finally, there are other complications that are caused directly by the virus itself. Perhaps the most well-known of these is HIV wasting syndrome, or the involuntary loss of 10 percent or more of body weight. This can happen due to a wide variety of causes, including AIDS-related diarrhea, loss of appetite, or sickness from opportunistic infections (x).

There are also several neural complications, including confusion, depression, anxiety and impaired memory. Ultimately, about 20 percent of AIDS patients will develop AIDS dementia complex. This occurs when the virus crosses the blood-brain barrier and infects cells inside the brain itself. AIDS dementia complex is similar to Parkinson’s disease, and symptoms become worse as it progresses (x).

In advanced stages, it can lead to kidney disease. If this progresses far enough, a patient may require dialysis or even a transplant. Because this is a known risk, most doctors keep a close eye on kidney function in AIDS patients.

There are two primary methods of diagnosing HIV/AIDS. The first, as we’ve already discussed, is by measuring a patient’s CD4 T cell count. If it falls below 200, the infection has progressed to the AIDS stage.

Another method is to measure the viral load (x). This is done by measuring how many copies of the virus are present in a milliliter of a patient’s blood. A count of 10,000 or less is considered low, and means the virus is relatively well-controlled. The ultimate goal of any treatment is an undetectable count, which falls around 20 or lower. On the other hand, a count of 100,000 or more is high, and means the disease is at risk of progressing.

There is no cure for HIV/AIDS. However, advances in medical technology have advanced to the point where an HIV-positive person who is receiving treatment has the same life expectancy as an HIV-negative person. Without treatment, the infection will eventually advance to the point of AIDS, so it’s essential to get treatment immediately.

NNRTIs work by preventing the virus from reproducing. Normally, RNA from the virus enters a CD4 T cell, and uses material from the cell’s nucleus to convert into DNA. NNRTIs block this reaction, so the virus’ RNA load is wasted (x).

NRTIs do the same thing as NNRTIs, but via slightly different chemical mechanisms (x).

Depending on how a particular patient responds to particular medications, they may need one medication, or a combination of two or more. A good doctor will constantly monitor a patient’s CD4 T cell count and viral load, and adjust their medication accordingly.

Because HIV/AIDS and antiretroviral drugs can take a toll on your body, it’s important for patients to take a full round of supplements. These include:

HIV is a viral infection that attacks white blood cells. It’s typically spread via unprotected sex, although it can also be spread through blood transfusions, intravenous drug use, and from mother to daughter. When left untreated, it can lead to AIDS, a life-threatening condition that leaves a person vulnerable to cancer, infection, kidney damage, and even dementia.

Thankfully, HIV can be fully suppressed with the use of antiretroviral medication. With proper treatment and the right nutritional supplements, a person with HIV can enjoy the same life expectancy and quality of life as a person without HIV.