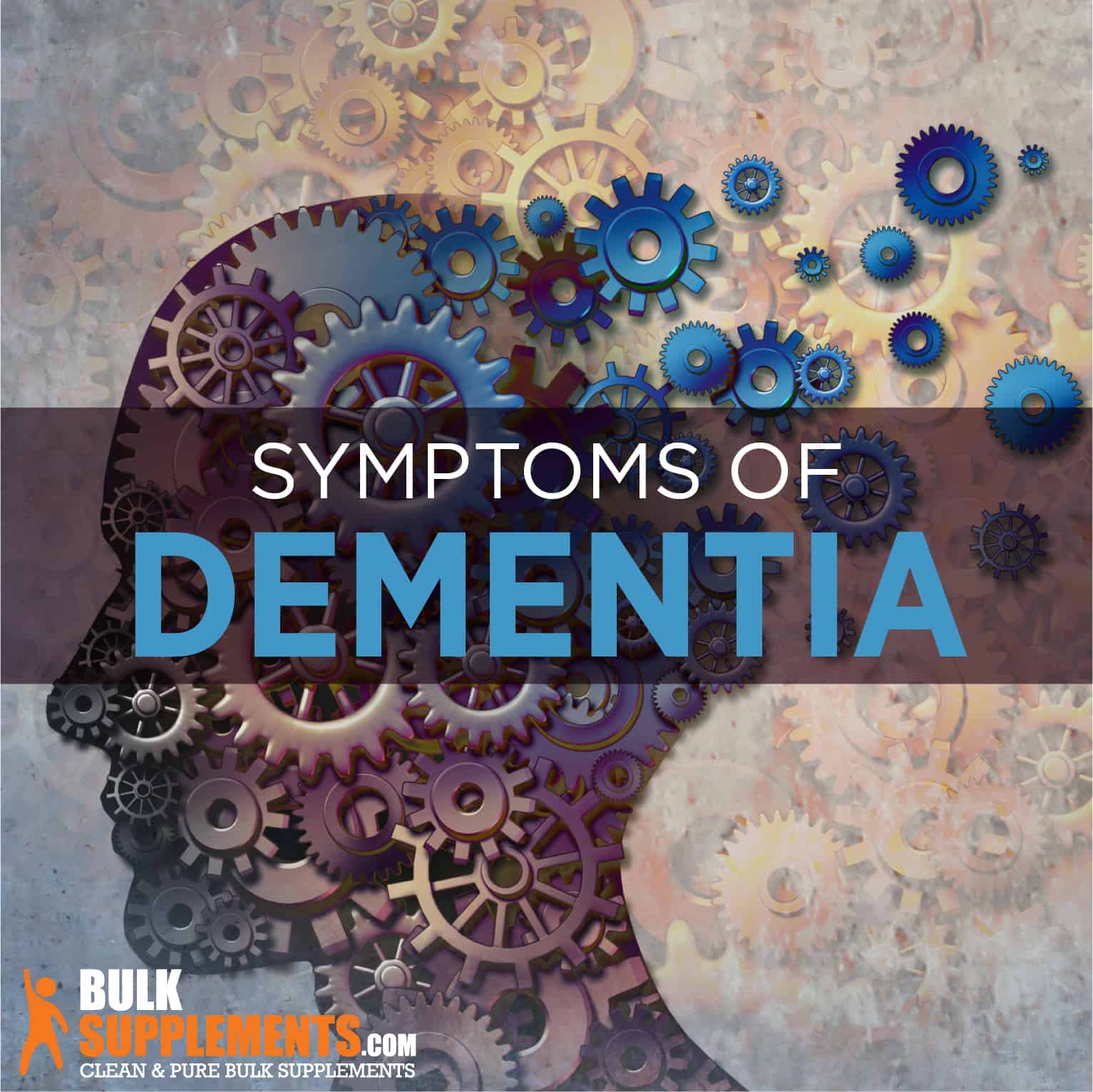 The most common form of dementia is Alzheimer’s disease (x). About 10 percent of people will be affected by some form of dementia during their lives. This percentage swiftly increases with age, impacting those who are aged 85 or older most often (x).

Dementia is, in fact, one of the most common causes of disability in the elderly. Because of that, and the fact it negatively affects caregivers, estimates show it may cause an economic loss of over 600 billion U.S. dollars a year. Many medical professionals consider the extensive physical or chemical restraining of people affected with dementia to be a violation of human rights (x).

Dementia is a spectrum of illnesses that has a wide variety of symptoms. Naturally, most of these symptoms are restricted to mental function. This is partially why it is often detected fairly late (x).

Some of the most common symptoms include:

This condition differs significantly from mere forgetfulness. If you can easily remind someone of what they forgot, it’s probably just them being scatterbrained. If someone is forgetting things like family member’s names, or even who they are, that can be an obvious sign of dementia.

Dementia can also cause physical changes. Due to the way it affects the nervous system, afflicted patients can have issues with swallowing (x).

Stage 4 is called early-stage dementia. Its symptoms include apathy, forgetting recent events and trouble organizing oneself. Personality changes may also occur, especially aggression due to the rampant confusion.

Stages 5 and 6 cover mid-stage dementia, and this is where moderately severe cognitive damage begins to occur. Stage 5 is colored with feelings of confusion and forgetfulness. Meanwhile, stage 6 can cause delusions and hallucinations in the patient. At this point, the sufferer might begin to forget their personal details or those of loved ones.

The final stage, stage 7, is late-stage dementia. At this point, the sufferer begins to have issues with eating and swallowing. The ability to speak ceases, and even walking is a problem. The patient’s weight fluctuates, and they become much more susceptible to infections. This is how dementia usually kills, by decreasing the effectiveness of the immune system. The patient will also find sleeping to be an almost impossible task, further increasing irritability (x).

Those with memory difficulties should immediately check themselves for B12 deficiency and hypothyroidism. Hypothyroidism is a hormonal disorder, easily remedied by hormonal injections, while B12 deficiency can be resolved with supplements. Due to the difficulties in determining risk factors, tests for neurosyphilis and Lyme disease are only to be run in cases where dementia is already suspected (x).

Unfortunately, it is far more common for the causes of dementia to be irreversible. In these cases, slowing the onset is usually all that can be done. However, that can still increase a patient’s quality of life significantly.

Alzheimer’s disease accounts for about 60 percent of all dementia cases (x). This form of dementia is responsible for short-term memory issues and trouble with visual-spatial intelligence. It is caused by shrinkage in the hippocampus, one of the brain’s most important regions. It is followed by damage in the temporal and parietal lobes (x). Often, a brain cell disease will be to blame for the atrophy.

The second most common form is vascular dementia (x). It accounts for about 20 percent of all cases worldwide. It is most often a result of traumatic injury which stunts the supply of blood to the brain. Typically, minor strokes follow these injuries. The decreased blood flow in certain regions of the brain then causes what we understand as vascular dementia (x). It tends to increase risks for other blood-vessel-related issues and is often made worse by major tobacco use.

Lewy body dementia is one of the more terrifying sorts. It contains some of the symptoms of Parkinson’s disease (x). These symptoms include the shaking and tremors that people with Parkinson’s experience. Dementia with Lewy bodies can also cause hallucinations. The hallucinations are both visual and acoustic; the patient will experience intense and vivid hallucinations, often before falling asleep and after waking up.

The fourth common kind of dementia to consider is frontotemporal dementia. This causes abrupt and intense personality shifts. It is often one of the hardest forms to deal with for caretakers, as patients can get rather violent. This is one of the few kinds that isn’t primarily characterized by memory issues (x). And while this form has different types characterized by different personality shifts, they all produce apathy. The person who has frontotemporal dementia slowly loses touch with the world and becomes apathetic.

Dementia occurs much less in countries such as India than it does in the Western world. Many believe that this difference is due to the vast amounts of turmeric that these countries consume. Turmeric has a variety of benefits for your mental health. It blocks the formation of beta-amyloid, which is the leading cause of Alzheimer’s and dementia. Because of this, it can either slow the onset or even help with treatment.

While lutein powder doesn’t directly tackle dementia, it can make some of the symptoms much more bearable and easy to manage. It is present in many medicinal herbs that can aid in dementia recovery. You can use lutein to help in the later stages as well, as it serves as an antioxidant.

L-serine may fight off the onset of dementia (x). It can be an especially large help in falling asleep. Many underestimate how much sleep can change one’s mental state. Not to mention that the inability to fall asleep is one of the most troublesome symptoms of dementia to treat. It also helps the synthesis of creatine, which is extremely important for the body. The proper dosage of this supplement is 2,000 mg per day, preferably together with a meal.

Strokes can be one of the most common causes of dementia in the elderly (x). Blood vessels tighten and lead to atrophy in the brain. This can cause vascular dementia. To help maintain the health of your heart at its peak, it is advisable to take supplements such as Rutin. Rutin is a natural antioxidant and benefits heart health. This can decrease the chances of getting a stroke. If you want to take this supplement, only take about 650 mg once per day.

Ginkgo biloba leaf extract is one of the best universal mental health supplements out there. It helps mental health in a myriad of ways and is an excellent supplement to cover all your bases. Naturally, it also helps offset the initial stages of dementia too. It benefits mood and focus, two things that suffer a great deal from the illness. Research shows that this supplement may affect age-related cognitive decay, which is the first three stages of dementia. Take this supplement in doses of 175 mg three times a day.

Dementia is one of the most common mental health illnesses today. Almost half of the people aged 85 and above suffer from some form of this illness. It impedes a person’s daily function and is characterized by a memory decay larger than that which one would expect of old age. Atrophy in the brain is its main cause.

There are multiple forms of this illness. Some are treatable by taking certain supplements. Supplements like turmeric and L-serine can be especially helpful when treating this illness. Some forms of dementia, however, cannot be stopped. It can bring many changes, ranging from memory issues to drastic personality changes.