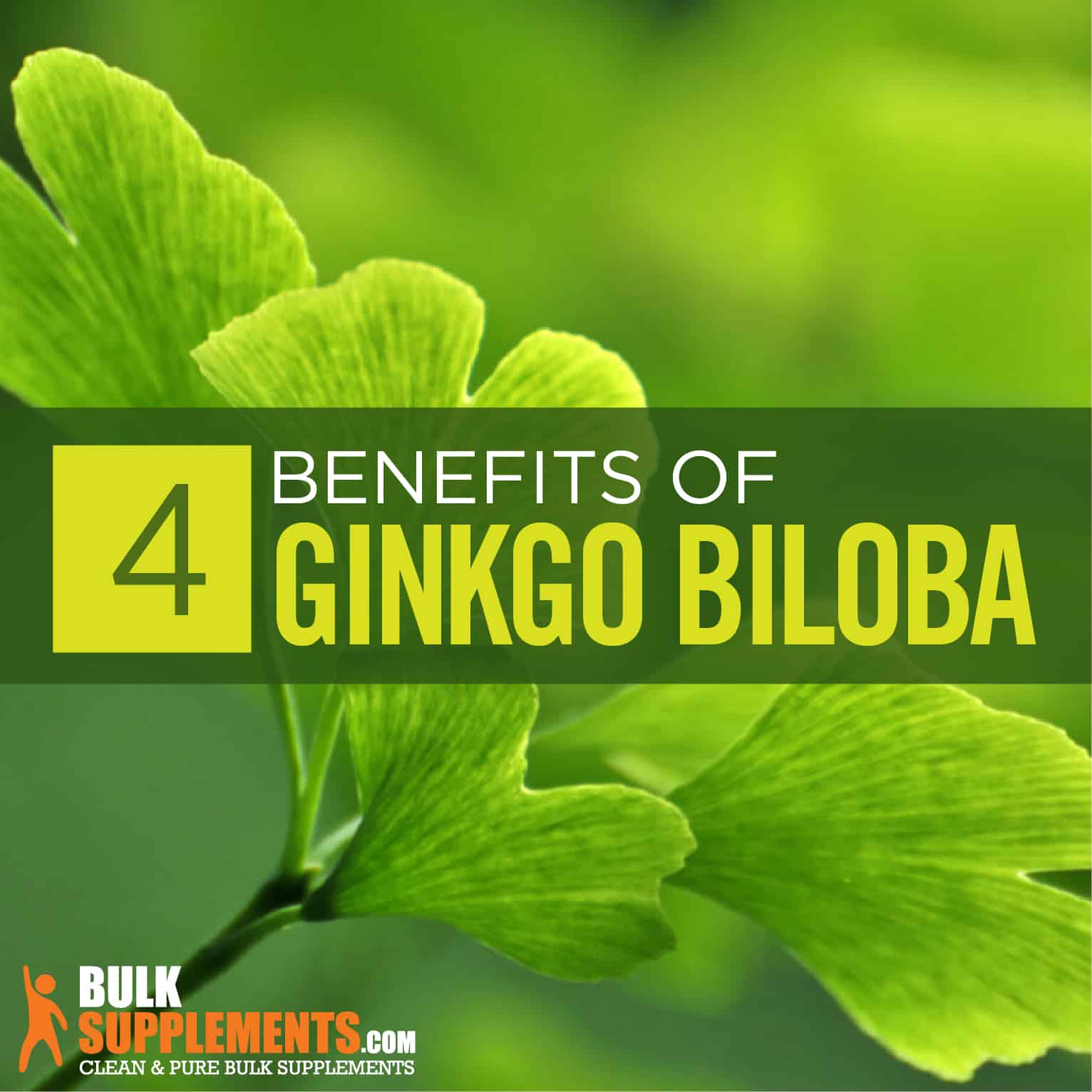 What Is Ginkgo Biloba?

Ginkgo biloba has been a key player in traditional Chinese medicine for thousands of years. Ginkgo biloba, sometimes referred to as the maidenhair tree or simply “ginkgo” is the last remaining species of Ginkgophyta. You might also hear the ginkgo tree referred to as a living fossil. After all, it’s been in existence since the last major ice age.

Chinese medicine has used various forms of the plant. These forms include teas, powders, tinctures and capsules. The version most common in the western world is an extract made from the leaves of the ginkgo biloba plant.

What has so many people interested in the ancient herbal remedy? Well, it may have a profound effect on mental clarity, focus and memory. However, this isn’t the extent of ginkgo’s amazing benefits.

One of the most well-known ginkgo biloba benefits is its work as an antioxidant powerhouse. Antioxidants are substances with the ability to neutralize free radicals. As a result, this mitigates free radicals’ potential to cause damage on a cellular level. Free radicals can be introduced into the body through environmental sources. Overexposure to UV rays is just one example. However, much of the oxidative stress the body undergoes is a natural process of aging. This is part of the reason the rate of disease tends to increase as we age.

Ginkgo biloba has a reputation for being one of the best natural memory supplements available today. Not only can it improve the flow of oxygen to the brain, but it can also support healthy memory function through a variety of mechanisms. Improvement in memory is one of the primary reasons many people take ginkgo biloba leaf extract. However, there are still some in the scientific community that claim there is insufficient research backing up these claims.

Over the past decade, though, there has been enough research on ginkgo for memory use that we can safely say that it does have positive benefits for increasing cognitive memory functions (x). This is especially true in studies focusing on the effects of ginkgo in patients with dementia or schizophrenia (x).

With such a heavy focus on the use of ginkgo in preventing and treating dementia, there has been less interest in the effects of ginkgo on a younger, healthier population. This is why one study on ginkgo, with the inclusion of panax ginseng, is especially interesting. Participants who took the supplements, all of whom were healthy middle-aged persons, had remarkable improvements in both short-term and long-term memory processes (x). These results indicate that ginkgo is effective for boosting mental clarity and cognition in healthy populations.

Ginkgo leaves and other parts of the plant have been honored in traditional Chinese medicine (TCM) for their therapeutic capabilities. Following the beliefs of TCM, ginkgo is an “opening” herb, meaning that it opens passages and clears energy. Its uses in TCM to aid in the treatment of lung and bronchial conditions, as well as for improving blood flow throughout the body, give it this reputation (x). Another impressive trait of ginkgo is its ability to reverse the thrombogenic coagulation profile while mitigating the risk of excessive bleeding (x).

Research proves that positive circulatory effects of ginkgo biloba are the result of several components. More research is necessary to uncover additional information about the mechanisms of ginkgo in the body, however. That said, ginkgo has produced positive outcomes in multiple statistical analyses on the plant’s ability to promote healthy circulation (x).

For instance, one study looked at the effects of ginkgo biloba supplementation in persons with known heart disease. This study proved that ginkgo use resulted in increased levels of nitric oxide — a compound necessary for blood vessels to dilate properly. The same study also showed an immediate increase of blood flow circulation throughout various parts of the body (x).

While more research is necessary, preliminary studies tell us that ginkgo can be an effective supplement (when used under a doctor’s care) for treating patients with known circulatory conditions and for the prevention of stroke in at risk individuals.

Estimates show that 40 million people in the United States experience symptoms of an anxiety disorder in any given year. Worldwide, one in 13 people suffer from some form of anxiety. This includes major depressive disorders, social avoidance and other specific types of phobias (x). Standard treatment for anxiety and depression disorders includes therapy, medication and lifestyle adaptations.

While not intended to fully replace modern pharmaceuticals, more people who suffer from anxiety and depression are turning to natural treatments, including ginkgo biloba.

It’s possible that ginkgo biloba can improve one’s eye health. In a study based on ginkgo biloba’s impact on patients with glaucoma, the supplement managed to increase ocular blood flow (x). Still, more research is necessary to determine ginkgo biloba’s true potential as a treatment for eye health.

Ginkgo biloba has one of the richest histories of any plant-based supplement we use today. For starters, it’s one of the oldest trees on earth, dating back to the Mesozoic period. While indigenous to Asia, there is evidence that the plant was prevalent before the ice age in the regions that we now know as North America and Europe. The ice age depleted the world of the overwhelming majority of the plant, yet some did survive and have remained the only species of the Ginkgoaceae family in existence today (x).

Today, ginkgo biloba leaf extract is used throughout the world for medicinal purposes. For instance, the plant is widely used for stroke treatment in Europe, as well as Raynaud’s disease. In Germany, herbalists recommend using it for circulatory issues such as varicose veins and leg ulcers. In the western world, ginkgo has become one of the most well respected supplements for not only circulatory health, but also in treating conditions of cognitive disease.

While ginkgo is an incredible and beautiful plant, you probably don’t want a female tree growing in your own backyard. When fall comes around and the female ginkgo biloba tree sheds its leaves and fruit, they emit a terrible stench — a smell akin to vomit or dirty gym socks. It’s best to skip growing your own ginkgo plant and turn to a trusted resource for the best ginkgo biloba supplements.

Ginkgo biloba leaf extract is likely safe for most people. Side effects are rare, but the most common ones include digestive upset, headache, increased heart rate, dizziness and allergic reaction. Currently, there is not enough information available on the safety of ginkgo biloba for women who are pregnant or breastfeeding. It is possible that ginkgo may be unsafe during pregnancy due to the fact that it may contribute to early labor or cause excessive bleeding during labor and birth. Therefore, women should talk to their doctor before taking any supplement containing ginkgo if pregnant or if there is concern regarding transfer to the baby via breast milk (x).

For people with certain health conditions or concerns, it is advised to seek medical guidance before taking ginkgo since the medicinal qualities of the plant are contraindicated with some conditions. These medical conditions include bleeding disorders, known upcoming surgery, history of seizures, diabetes and infertility. It is also best to refrain from taking ginkgo while also taking ibuprofen and medications that affect blood clotting (x). Taking ginkgo while using these medications may result in bruising or excessive bleeding.

The amount of ginkgo biloba used in human scientific studies varies depending on the research and the purpose of supplementation. Considering this, it is best that individuals take ginkgo biloba leaf extract in dosages ranging from 80 mg two times a day, up to 600 mg two times a day (x). Keep in mind that the higher end of this dose range coincides with what has been used in research on ginkgo and cognitive impairment.

It is also best that you take ginkgo at meal time to avoid upset stomach and other digestive side effects. Once you’ve been able to assess your body’s reaction to ginkgo and acclimate to the supplement, it is safe to increase the dosage (if necessary) for therapeutic needs.

It is always wise to discuss ginkgo biloba supplementation with your physician to determine the safest and lowest therapeutic dose.

Ginkgo biloba leaf extract is an herbal remedy that dates back thousands of years. Today, we know more than ever about how this amazing plant works to enhance people’s lives.

With evidence to back up its benefits for sharpening focus, maintaining mental clarity and improving circulation, ginkgo is one supplement that deserves more attention. In the meantime, enjoy the healthy boost that ginkgo supplies. And, of course, don’t hesitate to speak with your physician if you have questions about ginkgo use.