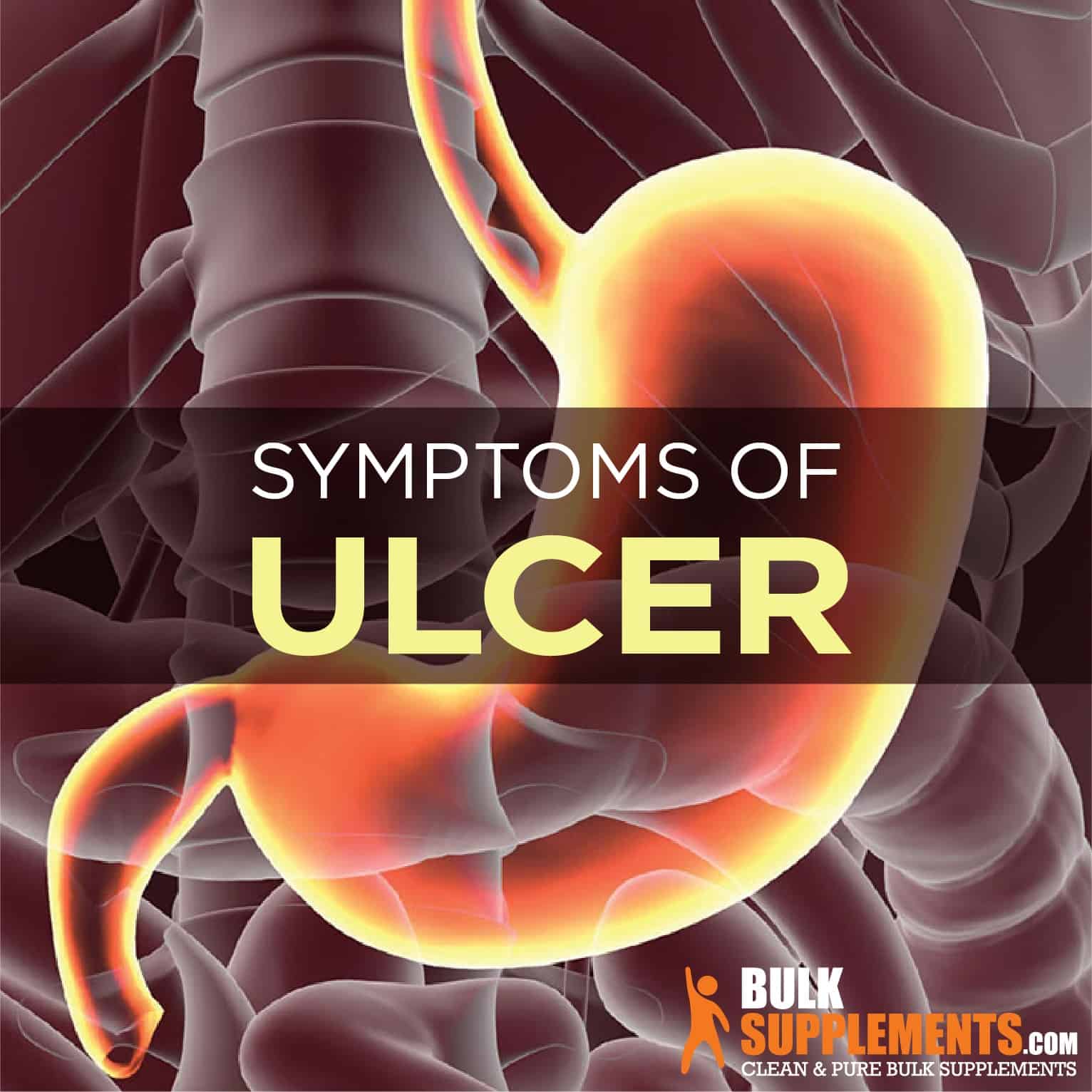 Most ulcers are caused by the Helicobacter pylori (HP) bacteria. Some ulcers and smaller “erosions” are a result of reactions to certain medicines — especially those taken for muscle pains and arthritis (aspirin compounds and non-steroidal anti-inflammatory drugs [NSAIDs]). A very large number of people who experience indigestion do not have underlying ailments like ulcers or erosions (and cancer is very rare) (x).

Ulcers bear different names mainly based on the location where they occur. When an ulcer occurs in the stomach or duodenal lining where pepsin and hydrochloric acid can be found, this is referred to as a peptic ulcer. When an ulcer is present in the stomach, it is classifies as a gastric ulcer (x). Pressure ulcers are also quite common. Usual pressure ulcer sites include the back of the head and ears, the shoulders, elbows, lower back and buttocks, the hips, the inner knees and the heels (x).

Symptoms of an Ulcer

Abdominal pain is one of the most common duodenal ulcers symptoms that many people report. While occasional pain in the stomach is normal, some people experience pain so disruptive that it can seriously impact their quality of life. For those unfortunate enough to go through this distress, finding out the cause and receiving treatment is a necessity. Gnawing stomach pain and a feeling of the stomach inflating are some of the sensations that are most common (x).

Indigestion (or dyspepsia) is an extremely common problem. Stress and poor eating habits often contribute to indigestion. Indigestion occurs in people of all ages and both sexes. It is exacerbated by being overweight. Abdominal pain can be caused by too much food and a high body mass index. However, indigestion as a symptom of an ulcer does not depend on the amount of food consumed or body mass index. Indigestion can be a sign of more serious health problems. If you begin to lose weight, feel your appetite subside, or experience severe abdominal pain, you need to consult a physician. This could also cause pain in the middle of the stomach above the belly button (x).

When you feel nauseous, you may feel weak and sweaty. You may also notice more saliva in your mouth than usual. Nausea often leads to vomiting. Most of the time, you do not need to worry about nausea and vomiting, but they can frequently be signs of other illnesses. Two common causes of nausea and vomiting are stomach flu and food poisoning. Nausea and vomiting from viral stomach flu will usually start to improve within 24 hours. Nausea and vomiting from food poisoning may last from 12 to 48 hours. However, nausea from ulcers does not have a duration; some people even vomit black tar. Nausea from ulcers usually does not depend on the foods that you consume and may be experienced at any time (x).

Heartburn is a painful burning feeling in your chest or throat. It happens when stomach acid accumulates into your esophagus — the tube that carries food from your mouth to your stomach. If you have heartburn more than twice a week, you may have GERD. But you can have GERD without having heartburn. Pregnancy, certain foods, alcohol and some medications can trigger heartburn. Treating heartburn is important because, over time, reflux can damage the esophagus. Heartburn resulting from ulcers is usually extremely severe and may also occur more frequently (x).

Bloating occurs in your abdomen (stomach). It happens when your gastrointestinal (GI) tract is filled with air or gas. When you are bloated, you feel as if you have eaten a big meal and there is no room in your stomach. Your stomach feels full and tight. It can be uncomfortable or painful. Your stomach may actually look bigger. Common symptoms of bloating include stomach pain, discomfort and gas. You may also burp or belch frequently or have abdominal rumbling or gurgling. Fluttering in stomach and/or stomach palpitations may also be clear symptoms of ulcers (x).

Some used to believe that lifestyle factors such as stress and diet caused ulcers. However, researchers determined that stomach acids — hydrochloric acid and pepsin — contribute to their formation. Today, research shows that most ulcers develop as a result of infection with a bacterium called Helicobacter pylori (H. pylori). It is believed that H. pylori is the primary cause in most cases.

Apart from H.pylori, there are some other factors to consider:

Smoking is not recommended under any circumstances as it can greatly slow down the healing process of ulcers and may lead to a future recurrence. Also, it has been proven that smoking raises your chances of getting an ulcer as well (x).

Stress denotes a major determining factor in the development of ulcers. Bodily stress such as the type experienced during surgeries or injuries may increase your chances of developing an ulcer, especially a stomach ulcer (x).

These drugs (such as aspirin, ibuprofen and naproxen sodium) are some of the most commonly consumed drugs and expose the stomach to the harmful effects of pepsin and acids (x).

In most cases, medicines can heal ulcers quickly and effectively, and eradication of H. pylori prevents most ulcers from recurring. However, people sometimes do not respond to medication and may require surgery (x).

If you have an ulcer, avoid the things that make your pain worse. Refrain from spicy foods, alcohol and smoking. If you have to take aspirin or ibuprofen for chronic pain, talk to your doctor. He or she may suggest an alternative. Keep your diet balanced. Try eating small, frequent meals when you are having pain. A ruptured ulcer usually requires immediate surgery (x).

Slippery elm can be used for a variety of purposes, but it may be especially effective in heartburn and GERD cases (x). Use slippery elm bark extract as directed.

The niacin form of vitamin B3 is used by doctors to lower cholesterol levels, but niacin also lowers TG levels. The amount of niacin needed to achieve worthwhile reductions in cholesterol and TG levels is several grams per day. Vitamin B3 may help prevent and treat skin ulcers caused by peripheral vascular disease (x).

Methionine is used to prevent liver damage in acetaminophen (Tylenol) poisoning. It may also be used for increasing the acidity of urine, treating liver disorders and improving wound healing (x). Use L-methionine powder as directed.

L-glutamine can also boost immune cell activity in the gut and help to prevent infections. It may also relieve inflammation, as well as soothe intestinal tissues (x). Use L-glutamine as directed.

Ulcers can be pretty painful, but early detection can boost your chances of managing them better. In order to live a quality life even after a diagnosis, following your doctor’s instructions is essential as well as living a healthy, proactive lifestyle.