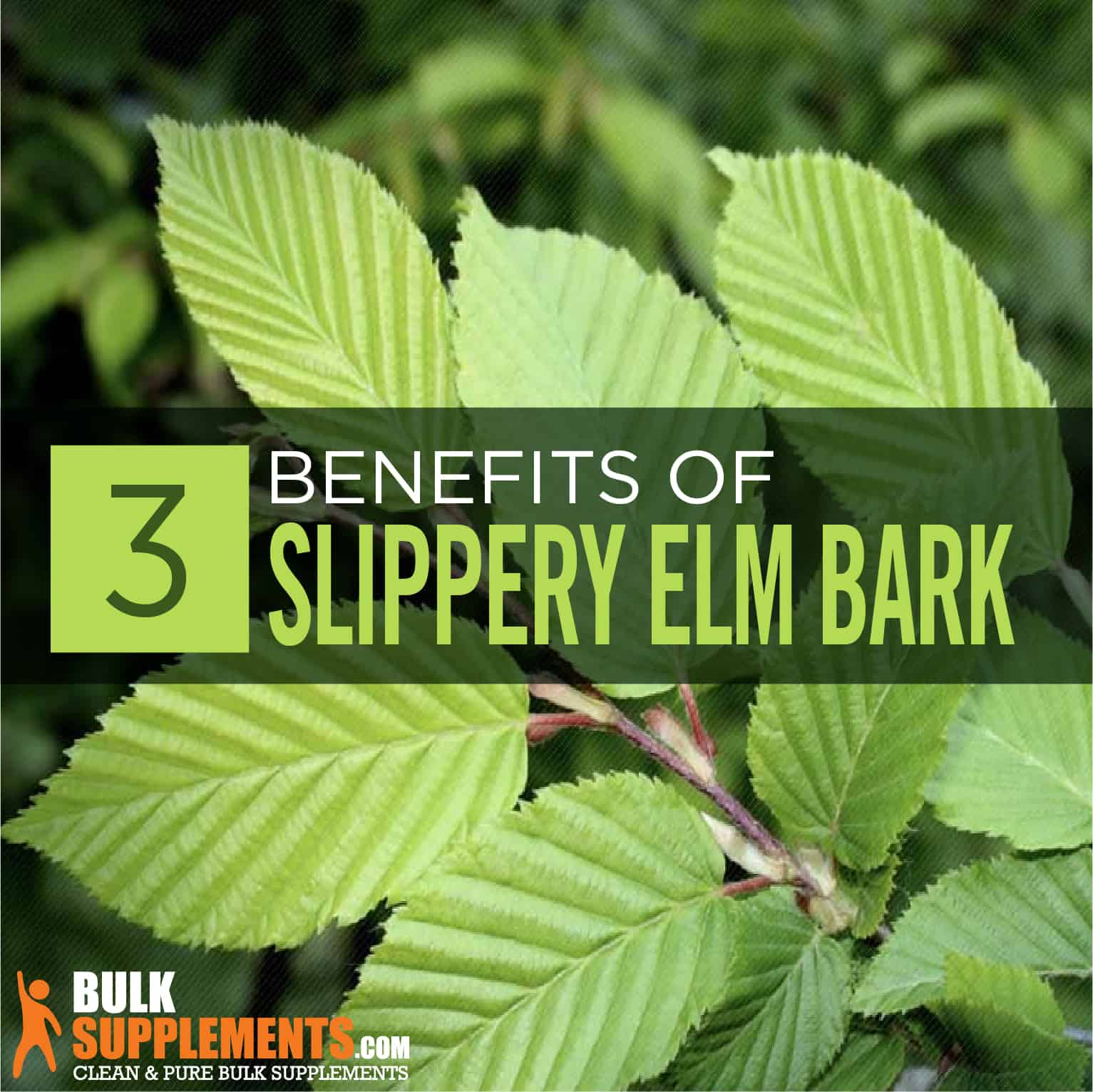 What is Slippery Elm Bark?

Slippery elm, also known as Ulmus rubra or Indian elm, is native to North America, thriving in moisture-rich upland climates. It is derived from a tree known for its dark brown and red-brown bark and its height; it can reach 60 to 80 feet when fully grown. For generations, many have used the inner bark of this tree for medicinal purposes.

The Native Americans were the first to use slippery elm to treat common ailments. In addition, they found that by wrapping meat with its outer bark, they could keep their meat from rotting. They also found that slippery elm mixed with water would form a sticky gel-like soluble fiber — mucilage, which had a therapeutic effect on mild irritations such as sore throats and skin lesions. During the revolutionary war, American soldiers used this mucilage on bullet wounds. Although cultural demographics around the world have adopted the use of slippery elm since, many still consider it a time-honored Native American remedy (x, x).

Slippery elm mucilage contains polysaccharides. In water, these polysaccharides break down into simple sugars — glucose, galactose and fructose. In their purest forms, these sugars can benefit the body. Although mainstream medicine considers slippery elm more folk than fact, studies have shown that it does have healing properties.

How to Use Slippery Elm

For it to work properly, you need to mix it with water to form mucilage. You can take it orally or use it as a topical treatment. Taken orally, it forms a mucilage that can coat various internal parts of the body, bringing relief to sore throats or gastrointestinal upsets. It can also help individuals struggling with acid reflux by coating the esophagus and stomach lining.

People have used slippery elm for generations to help sooth various ailments. Although its primary use today is to sooth sore throats, it has other health benefits.

Many use slippery elm to alleviate the symptoms of irritable bowel syndrome (IBS), a chronic health disorder that causes irritation in the stomach and intestines. Common symptoms include abdominal pains, diarrhea and constipation. Certain foods, stress, coffee and alcohol are common IBS triggers. There is no cure for IBS, but dietary changes, stress management, exercise and a few home remedies can help individuals living with it manage their symptoms.

One such home remedy is slippery elm. Studies have demonstrated its efficacy for treating IBS symptoms with promising results. A recent clinical study published in the Journal of Alternative and Complementary Medicine showed that a formula containing dried slippery elm powder improved symptoms in study participants with constipation-dominant IBS (x). The same study found that the formula helped participants reduce straining on the toilet, abdominal pain, bloating and flatulence.

May Alleviate Sore Throats and Coughs

Slippery elm taken orally forms a mucilage that coats the throat, preventing irritation from coughing and swallowing, making both less painful when you have a sore throat or cough. It is so popular for soothing sore throats that it’s actually an ingredient in many different brands of throat lozenges.

A small pilot study mentioned in the Journal of Investigational Biochemistry showed that study participants with upper airway inflammatory conditions experienced “trends of perceived ‘soothing’ being rated greater by those receiving slippery elm compared to a control substance” (x). If you have a bad cough, you may want to try taking this supplement. But make sure you talk to your doctor first.

A study published in the Journal of Basic and Applied Zoology showed that a “plant mixture” with slippery elm in it helped restore lost weight and total white blood cell, lymphocyte and neutrophil counts in rats with leukemia (x). The study concluded that its results supported “previous reports” of this plant mixture’s anticarcinogenic effects.

Other Notable Uses for Slippery Elm

Traditionally, people have used slippery elm to treat sore throats, coughs, digestive upsets and IBS. But it may prove useful to treat a few other ailments as well:

Slippery Elm Side Effects and Dosage

Slippery elm is safe to take with few reported side effects worth concern, and most tolerate it well. It may, however, cause minor digestive discomfort. Pregnant or breastfeeding women should talk to their doctors before taking it (x).

Mucilage may inhibit the absorption of certain drugs, thereby lessening their effectiveness. So you should take slippery elm at least an hour after taking medication. Nevertheless, if you’re taking medication, it’s important that you talk to your doctor first to find out whether it will react with the medication.

Slippery elm is available in a few different supplemental forms, each with its own dose guideline. If you’re taking a powder, take 700 mg once daily or as directed by a doctor.

Slippery elm is a natural remedy that many have used to treat mild ailments for hundreds of years. Native Americans were the first to discover its soothing properties, using it to treat mild wounds and skin irritations. It works by forming a healing salve with water that you can apply topically or ingest to relieve sore throats, coughs and digestive upsets.

Although it is safe to use overall, you should talk to your doctor before using it, and note that you shouldn’t use it as a standalone treatment for any condition. Rather, it makes an excellent addition to conventional medicine.