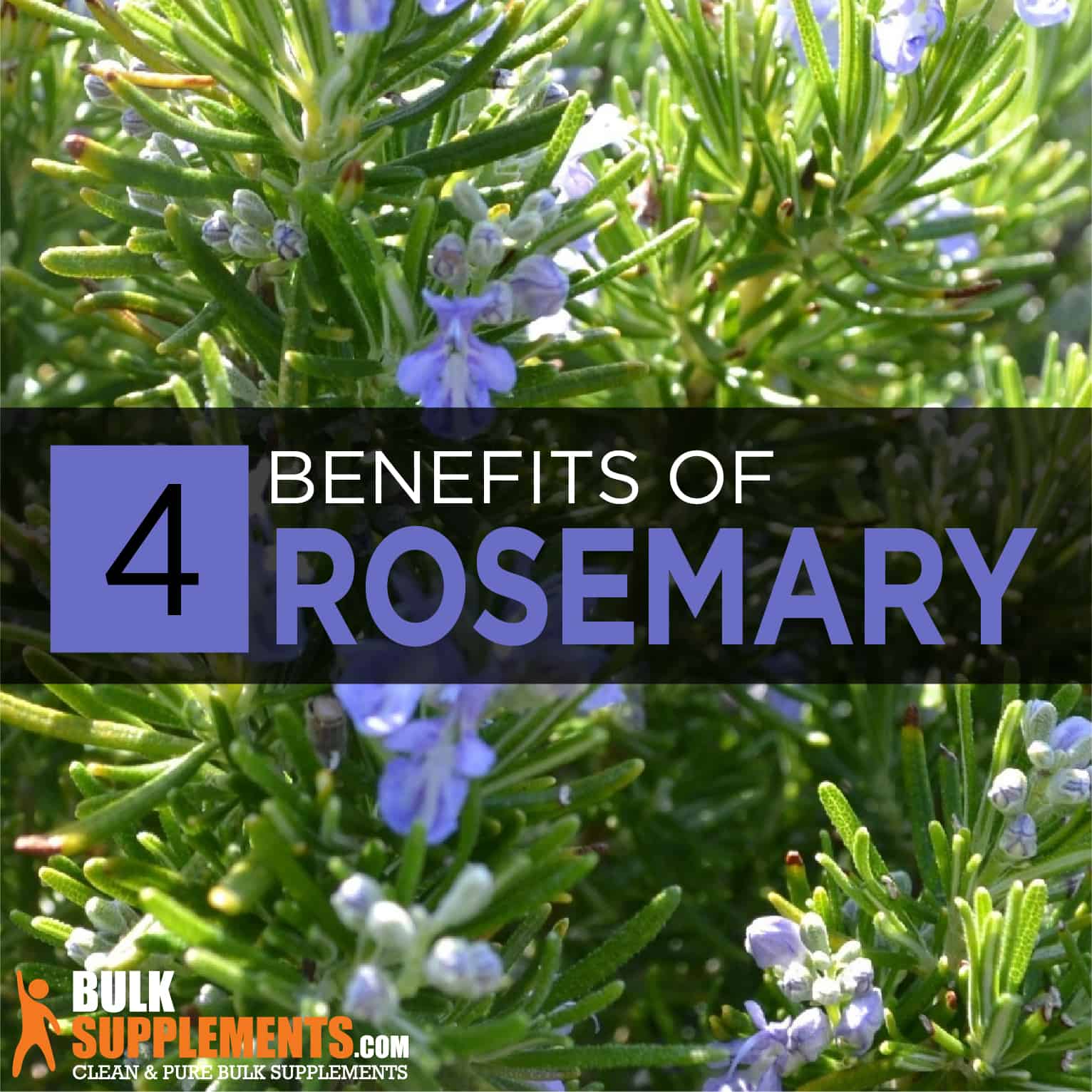 What is Rosemary Extract?

Shakespeare’s doomed Ophelia knew that rosemary was for remembrance, but it’s superb for much more than that. Rosemary (Rosmarinus officinalis), is an aromatic herb originating in the Mediterranean basin. It has a scent that’s unforgettable, refreshing and clean. Rosemary’s culinary and medicinal uses have been established for centuries, but renewed interest is revealing all the amazing things rosemary extract can do.

Rosemary is a common but exceptional plant. It not only delights the senses, but it also offers many benefits. It can boost memory, promote circulation and reduce inflammation. Rosemary extract and oil can also improve the appearance of skin and hair.

What is an Extract?

Extracts are made by concentrating some of an herb’s vital ingredients into a carrier solution, like alcohol or oil. They can come in powdered or liquid forms. In the case of rosemary, the aerial parts of the plant contain the highest concentrations of rosemary’s active chemicals.

Rosemary gets its therapeutic qualities from its impressive chemical profile. This herb is a good source of the following vitamins, minerals and compounds:

Known as a brain booster, rosemary helps improve memory (x). This effect may come from rosemary’s antioxidant content. Antioxidants neutralize free radical (harmful) molecules. In this case, rosemary contains the antioxidant carnosic acid, which seems to be very effective for protecting the cells of the brain.

Free radicals are natural by-products of cellular metabolism. However, they can harm cells if they build up. They interfere with the nerve cells responsible for recalling memories. Rosemary extract seems to speed up recall. Alertness, a primary component of cognition, can be positively affected simply by smelling the aroma of rosemary (x).

Carnosic acid is also unique because it doesn’t target free radicals in the brain until they start to damage cells. It might seem like getting rid of all free radicals would be ideal, but it’s not. Free radicals do have some beneficial uses, which makes carnosic acid’s selective targeting very useful.

Besides its antioxidant activities, carnosic acid may stimulate the body’s ability to produce neural growth factor, a chemical that is essential for a healthy brain (x).

Rosemary can be a useful tool to manage the inflammation and pain that comes with arthritis. It can help modulate the immune system’s response to threats, reducing inflammation without shutting down the immune response completely. In 2003, the Journal of Rheumatology published a study about this. It demonstrated rosmarinic acid’s effectiveness in reducing the hyperactivity found in immune tissues that results in rheumatoid arthritis. It also reduces fluid buildup in joints (x).

Another study from 2008 showed that not only does rosmarinic acid reduce inflammation and fluid buildup, it also acts as a painkiller (x).

Rosemary is a folk remedy for poor circulation. Current research is now investigating why it may have this effect. It appears as though a compound found in rosemary called 1,8-cineole elicits a vasodilatory effect. This means it helps your blood vessels relax so that blood can flow more efficiently (x).

Rosemary extract can improve the appearance of hair in a few ways. First, we know it boosts circulation, which, in turn, stimulates hair follicles. Increased blood flow improves the appearance of hair because the blood delivers nutrients that the hair needs. Second, and perhaps more importantly, rosemary is capable of slowing down androgen-related hair loss (aka male pattern baldness). In a study, the effect of rosemary was similar to that of Rogaine (x).

Skin also benefits from increased circulation. However, rosemary can keep skin healthy and beautiful in other ways. It’s a natural astringent and antibacterial, which makes it a great topical application for oily and acne-prone skin (x).

Rosemary’s anti-inflammatory properties may also help promote the health and appearance of skin. For example, a study by Dr. Jongsung Lee published in the December 2008 edition of The Journal of Dermatology showed that rosmarinic acid reduced the incidence and severity of eczema.

During the Bubonic Plague in the 14th century, people rubbed rosemary on themselves to keep the plague away. This is because rosemary’s leaves contain the chemical linalool which is an excellent flea repellent. Fleas carried and transmitted plague to people, so it makes sense that a good rub-down in rosemary was a sensible precaution (x).

Rosemary Extract Side Effects and Dosage

The suggested serving size for rosemary extract is 500 mg once or twice daily, or as directed by a physician.

As with all supplements meant to promote a general well-being, it is important to note that a supplement such as this is by no means a substitute for legitimate medical advice. It is always best to talk to a doctor if you are experiencing problems with your health before taking a supplement.

Rosemary applied topically can cause allergic dermatitis in some people.

Rosemary extract’s side effects are most pronounced in an oral overdose. Large amounts of concentrated rosemary extract can cause:

There’s no known harm in consuming very small amounts of rosemary in food or drink during pregnancy. Concentrated rosemary prepared for medicinal purposes, however, must be avoided while pregnant due to the potential for uterine bleeding (x).

Rosemary extract’s powerful anti-inflammatory effects alone are enough to make it a useful supplement. Factor in its usefulness as a free radical scavenger and cognition booster and it’s an obvious choice for adding to one’s daily supplement regimen.