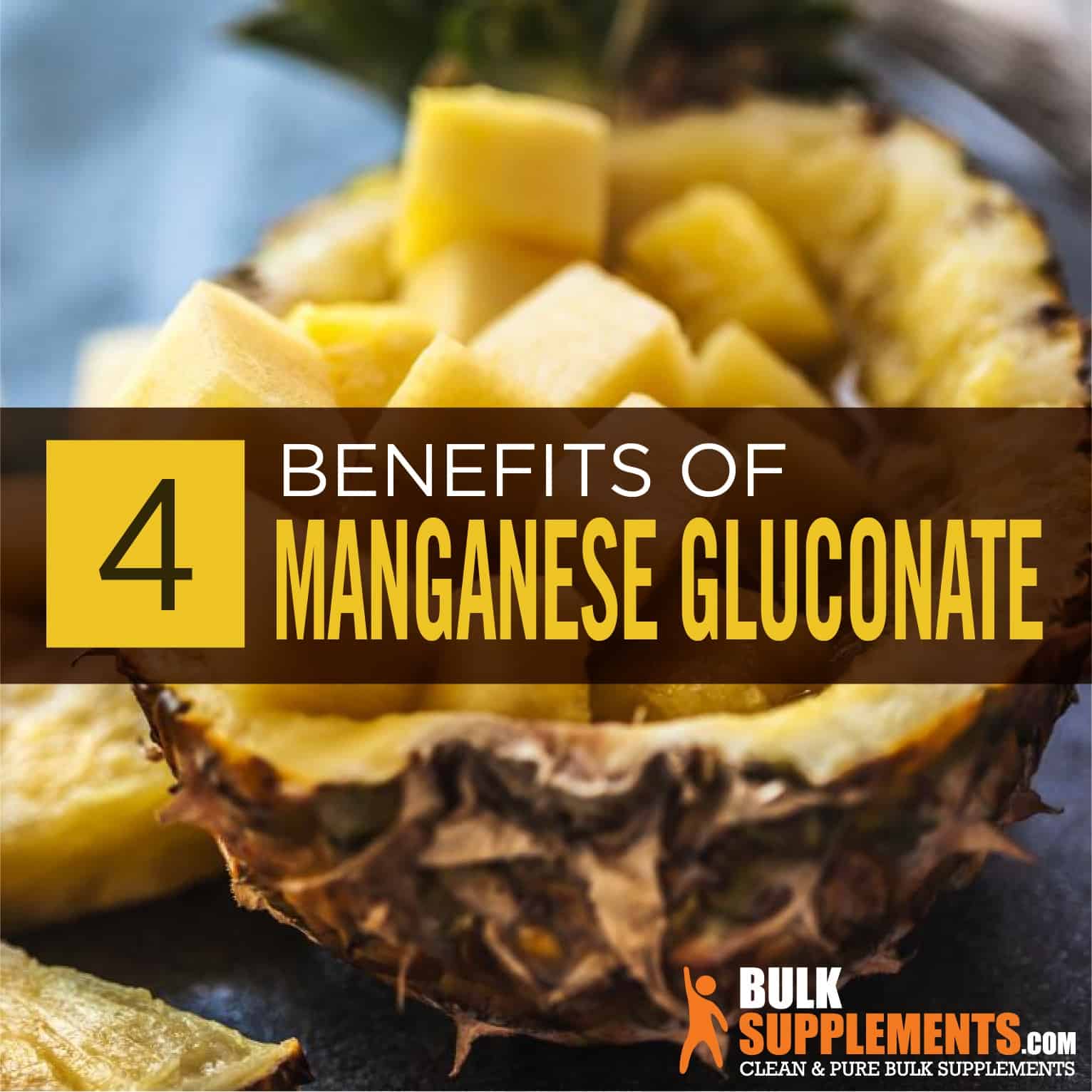 What is Manganese Gluconate?

Manganese is a trace mineral that the body needs to metabolize amino acids, carbohydrates, glucose and cholesterol. It also helps reduce inflammation and maintains nervous system function (x). However, the body only needs small amounts of it. It cannot produce manganese, but it stores it naturally in the kidneys, liver, pancreas and the bones. You can find this essential nutrient in small amounts in seeds and whole grains, as well as legumes, spinach, nuts and green and black tea (x).

One of the main uses of the supplement manganese is to prevent and treat manganese deficiency (x). It is not common and it may be difficult to spot the symptoms, but they may include slowed growth, abnormal glucose and cholesterol levels, as well as changes in hair color (x). Manganese gluconate is easiest to absorb. When manganese carbonate reacts with gluconic acid, it crystallizes and creates manganese gluconate (x).

Magnesium and manganese sound the same and it’s easy to confuse the two. Manganese and magnesium are both essential plant nutrients with similar qualities, but they also have important chemical differences. Magnesium is a highly reactive alkali metal and it is never a free element in nature. Manganese is a transition metal that is actually more chemically similar to iron than magnesium. Although manganese is important, the body uses a lot less of it than magnesium and for fewer reasons—mostly metabolic functions. Magnesium, on the other hand, converts food to energy for both humans and plants. It is one of the main elements in chlorophyll, which fuels photosynthesis (x).

Manganese may provide a number of health benefits. It may strengthen bones, reduce inflammation and relieve premenstrual syndrome (PMS) (x).

Approximately 50 percent of postmenopausal women and 25 percent of men older than 50 will experience osteoporosis (x). But manganese may help strengthen bones and prevent breaks with the help of other minerals—calcium, zinc, copper, magnesium and Vitamin D (x). In fact, a one-year study showed that these nutrients may improve bone mass in a sample size of women with weak bones (x).

For example, osteoarthritis is a degenerative joint disease triggered by inflammation of the membrane inside the joints (x). Manganese may help reduce inflammation and research suggests it may be an effective therapeutic agent for inflammatory disorders. In a study of 34 males with chronic pain, manganese supplements appeared to decrease inflammation, specifically in the knees (x).

Women often experience premenstrual symptoms (PMS) during their menstrual cycles. The symptoms can include cramps, pain, mood swings, anxiety and sometimes depression. Therefore, researchers conducted various studies to address these conditions, including the effect of manganese. Research shows that manganese in combination with calcium may help improve PMS symptoms. However, researchers are still unsure whether the positive effects were a result of each individual nutrient alone or a combination of the two (x).

Epilepsy is a condition characterized by unpredictable seizures. They are most frequently caused by strokes, (x) which result from decreased blood flow to the brain (x). Several studies suggest that since the brain holds manganese, people with epilepsy may have lower levels of it. However, some researchers hypothesize that the deficiency causes seizures and some think the opposite, that the seizures reduce manganese in the blood (x).

Side Effects of Manganese Gluconate

Welding fumes contain small amounts of manganese. Excessive occupational exposure to these fumes could potentially cause an effect called “manganism.” It has symptoms similar to Parkinson’s disease that may include tremors, slow movement, rigid muscles, poor balance and acute bronchitis. Exposure may also cause changes in mood, short-term memory, reaction time and hand-eye coordination (x, x).

What You Need to Know Before Buying Silk Amino Acids

Although it is rare, people may also have negative reactions to toxic manganese levels in their water or food. Infants, children and people with liver conditions are at a higher risk for negative side effects. Research also links the amount of iron to the amount of manganese in the blood. People with iron deficiency anemia may absorb more manganese but they also eliminate more of it (x, x).

As a supplement, the recommended dosage for manganese gluconate is 100 mg per day, unless a physician advises otherwise.

Manganese is a trace mineral that the body doesn’t produce on its own. But it has several different food sources. Our bodies do not need large amounts of manganese in order for the mineral to do its job.

Manganese gluconate is a common form with a variety of important benefits. First, the mineral works with other vitamins and minerals to improve bone mineral density and bone health. It also produces a strong antioxidant that can fight harmful cells in the body. Some research has shown that manganese may also reduce inflammation and help treat inflammatory diseases, such as osteoarthritis. Manganese and calcium may help reduce premenstrual symptoms. Most people do not have manganese deficiencies because it is present in food, but supplements can help treat them.