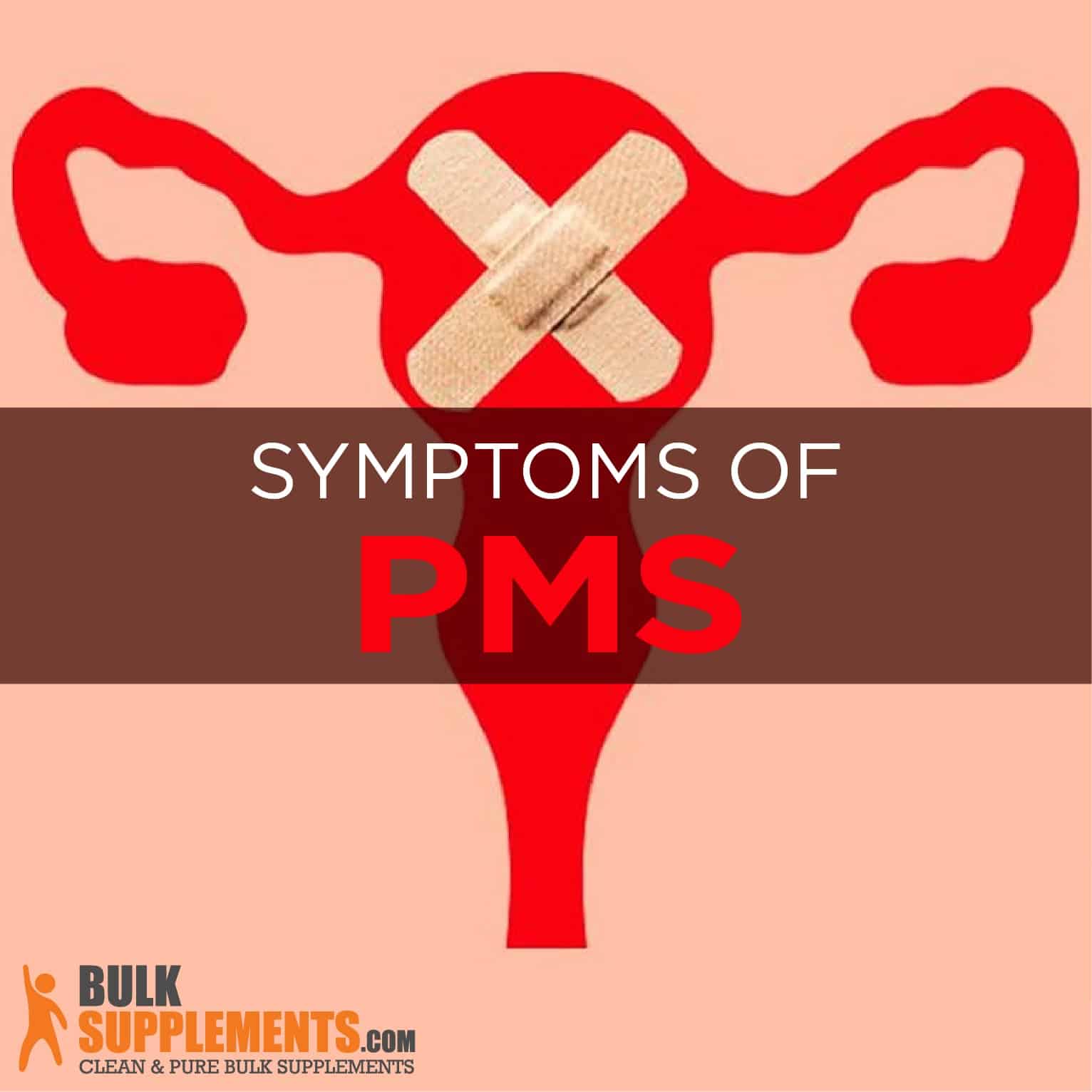 What is Premenstrual Syndrome?

Premenstrual syndrome, also popularly referred to as PMS, is a set of physical and emotions symptoms that affect a woman days or weeks before her menstrual period. It is experienced by an estimated 90 percent of menstruating women (x), and the effects may vary from mild and hardly noticeable signs to severe and more complicated symptoms. Only about 20 percent of such women actually experience symptoms that affect their daily life (x).

Many people don’t have a good understanding of this syndrome, and it is widely seen as synonymous to the mood swings experienced days before the periods. This may be because most women who go through PMS only show mood swings as the most visible signs. In reality, however, the syndrome involves much more than just mood swings.

While PMS is associated with hormonal fluctuations that happen to a woman’s body just before her periods, the exact cause remains unknown. It is experienced anywhere between five days to two weeks before menstruation starts. Luckily, it is usually easy to manage and does not necessarily require a visit to the doctor. Some women, however, experience severe changes in their physical and emotional aspects and may need assistance from a therapist or doctor.

PMS is generally a naturally occurring condition that is believed to be brought about by hormonal changes in the female body. Some factors, however, increase the chances of one experiencing it, and its severity. They include (x, x, x):

The symptoms of PMS and those of pregnancy are very similar. The primary difference would be that PMS eventually ends in menstruation, and pregnancy doesn’t.

During pregnancy, the breasts may feel sensitive or tender. They may stay this way for a while as the levels of hormone progesterone increase in the bloodstream. This usually happens in the second week of pregnancy.

In PMS, the breasts will also feel very tender, and one may even experience some breast pain. It gets worse right before menstruation, but stops when periods begin.

Nausea is a common symptom of pregnancy, mainly occurring a month after conception. However, nausea is not common during PMS. It may result from bloating and digestion problems that arise from the syndrome, but is generally uncommon among menstruating women.

Mood swings are a permanent symptom in pregnancy. The expectant mother will often be emotional, alternating between crying, happiness, sadness and anxiety.

In PMS, irritability is common, and you may find yourself in random crying spells or excitement. This, however, goes back to normal once the periods begin. If they persist even then, they could indicate depression.

Light bleeding and spotting is a typical sign of pregnancy, occurring between the first and second week of pregnancy. It is not usually heavy enough to fill a sanitary pad and does not persist beyond a day or two.

In PMS, bleeding does not occur. Neither does spotting. PMS is accompanied by the actual period, which is heavier than just casual spotting. Periods can last for as long as a week.

Fatigue is particularly pronounced in the first month of pregnancy due to the drastic fluctuation in progesterone levels. For some mothers, it goes on throughout the pregnancy, and for others, it slows down and even stops after a few months before picking up again in the third trimester.

It is also common for women with PMS, and can even be associated with slight insomnia. The fatigue should stop when the periods begin. If it persists, it could be a sign of another underlying problem.

Pregnancy comes with food cravings and increased appetites that go on to the last trimester. One may also lose taste in certain foods and get disgusted at certain smells and flavors.

This is also common during PMS, only that it stops when the periods begin. You may notice a drastic increase in appetite and a craving for sweet or salty foods.

Cramping does not often happen during pregnancy, but when it does, it is light and just a little uncomfortable rather than painful. Such cramps should subside after some rest. Otherwise, one must consult a doctor urgently, especially when they have a history of child loss.

In PMS, cramping is very common, especially one or two days before the periods. They could be very painful, but they generally ease towards the end of the flow.

Different women experience different symptoms of PMS. Some of the most common include (x, x):

When to See a Doctor

PMS is not usually very problematic (80 percent of menstruating women report only one or two of the mildest symptoms) (x) and can easily be managed with some rest and simple OTC medications. Sometimes, however, PMS can really affect some women both physically and mentally. It becomes necessary to see a doctor for help. Such cases include:

Basically, see a doctor if you are entirely unable to adjust during PMS, especially when it’s adversely affecting important aspects of your life.

When not managed well, PMS can take quite a toll on your life and affect the most critical aspects of it. It can be particularly unbearable for women who experience painful cramps and muscle pains, not to mention depression and anxiety. Here are some helpful ways you can cope with PMS and get through it without having to see a doctor (x):

Remember to be kind to your body and give it the rest it deserves for faster healing.

Chasteberry extract powder is beneficial with specific symptoms of PMS, particularly the physical ones (x). It is useful in easing:

Even though this herb is widely used to boost brain function and memory, a recent study had found that it is very effective in treating the symptoms of PMS.

Taking Ginkgo biloba leaf extract powder thrice every day helps to reduce the severity of physical symptoms such as cramps and breast tenderness, and emotional ones such as irritability and depression (x).

The valerian root has been used in traditional medicine all over the world since time immemorial. It has quite a number of health benefits but is particularly famous for its anti-anxiety capabilities. In this regard, it is an ideal remedy for PMS symptoms.

A study conducted in 2013 among 100 female students a week before their periods confirmed that the valerian root extract helped to ease both physical and emotional symptoms of PMS significantly. They were administered two pills of the extract daily for seven days. At the end of the study, the researchers concluded that the root was effective in reducing the severity of the symptoms of PMS (x).

There is insufficient research regarding the effect of the Griffonia seed extract, otherwise known as the 5HTP supplement, on the symptoms of PMS. The existing evidence, however, suggests that it could be useful in reducing the physical and emotional effects of the condition, especially the latter (x).

St. John’s wort is particularly desired for its anti-depressant properties. It contains two vital neurotransmitters that help to reduce mental stress and depression.

In 2010, the herb was studied to show the benefits in relieving the symptoms of PMS. It was conducted on 36 women who had all been diagnosed with mild forms of the syndrome. The results showed that it could effectively be used to reduce the severity of both physical and emotional symptoms, especially depression and anxiety (x).

Before using any of these supplements, it would be wise to consult with your doctor, especially if you are taking any medication that could interact with them. Chasteberry, for instance, could interact negatively with family-planning and contraceptive drugs. It could also affect the functioning of any hormonal medicines. It would be wise to disclose your full medical history to your doctor during the consultation to figure out whether or not to take the supplements.

Premenstrual syndrome, also referred to as PMS, is a set of physical and emotional symptoms that a woman experiences before her menstruation. The exact cause is not known, but scientists associate it with the interaction of sex hormones with brain chemicals. It is experienced by more than 90 percent of menstruating women worldwide.

The signs of PMS include physical ones such as breast tenderness, headaches, cramps and abdominal bloating. It is also characterized by emotional and mental symptoms such as anxiety, depression, irritability, social withdrawal and emotional outbursts.

PMS does not usually require medical attention, but in severe cases, it may be necessary. One can ease the effects of the symptoms by exercising, resting, eating healthy food, getting enough sleep, avoiding alcohol and generally practicing a healthy lifestyle.