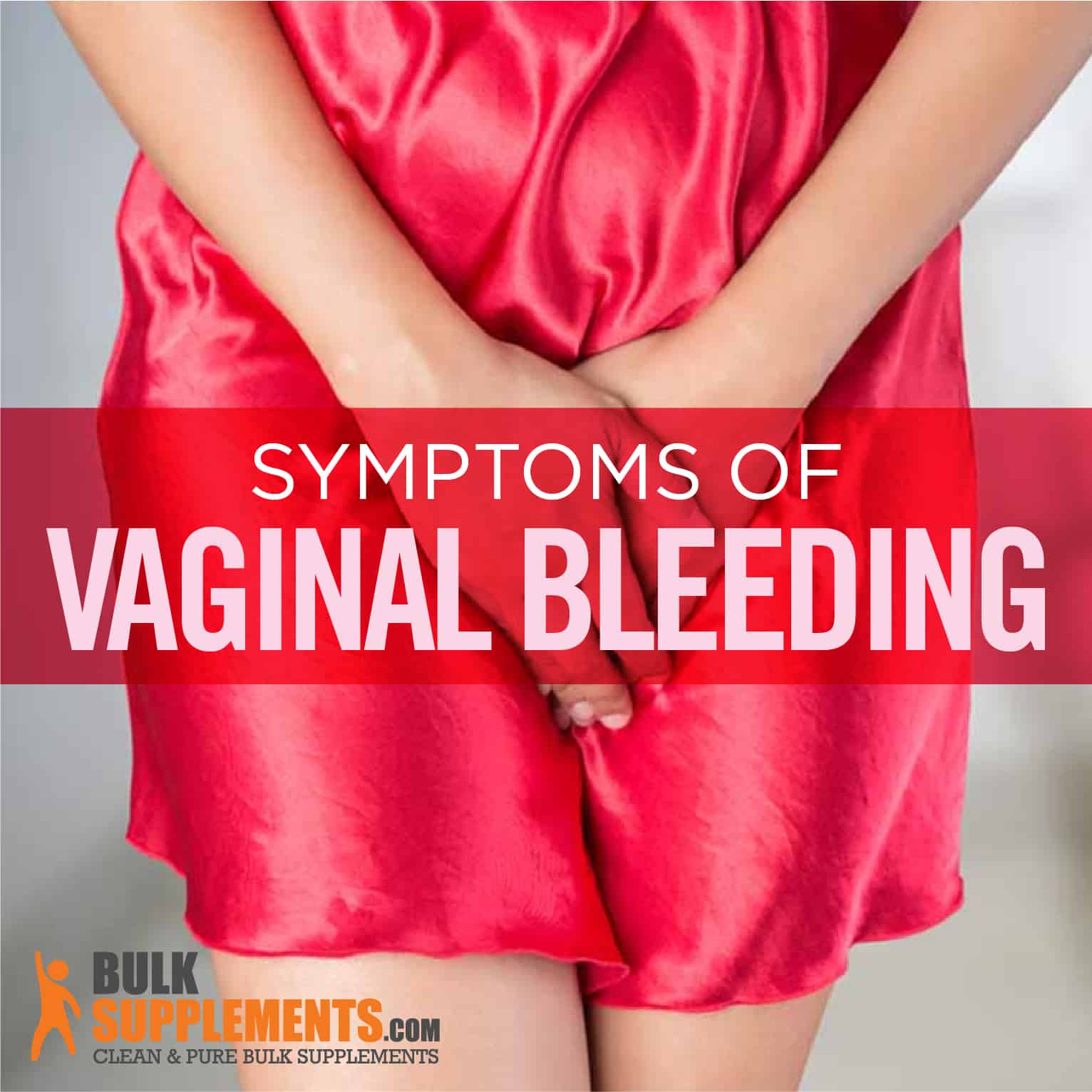 What Is Vaginal Bleeding?

Vaginal bleeding occurs outside of the normal menstruation period. Although it doesn’t always indicate a serious medical condition, it can sometimes be a sign of an underlying health issue that needs to be taken care of (x).

Bleeding that occurs outside of the normal menstrual cycle has a wide range of different causes that vary in terms of their severity, and it can appear in women of just about any age. This makes it a common medical problem, and something that most women will experience at some point in their life (x).

Bleeding That Occurs Outside Of The Normal Menstrual Cycle

In some cases, abnormal vaginal bleeding is heavy. The amount of bleeding will depend on the underlying medical issue. And if you notice that the volume of bleeding increases over time, you should consult your doctor, as this could indicate that there is a serious medical issue that needs to be addressed.

In some cases, vaginal bleeding is much lighter. This type of bleeding, called spotting, only involves a few drops of blood (x). However, it may still be a sign of a medical issue. If you still notice any spotting after using supplements, you should consider speaking to your doctor.

Vaginal bleeding is often a result of inflamed or infected tissue. If this is the case, sex may cause irritation that can lead to bleeding (x). Supplements may be able to help address inflammation and reduce discomfort. However, if you believe you have an infection, you should speak with your doctor, as the infection could worsen and spread.

There are many potential causes for vaginal bleeding, and it can affect women of all ages. Here are some of the main causes you should be aware of.

One of the main causes of vaginal bleeding is an imbalance in sex hormones (x). This can lead to an interruption of the timing of the menstrual cycle. In some women, it can cause heavy abnormal vaginal bleeding, while it only leads to spotting in others.

Hormones are important for regulating the menstrual cycle. Normal menstrual bleeding is a result of the shedding of the uterine lining. If you have hormone imbalances, the lining of your uterus may build up too much, which can lead to excessive or irregular bleeding (x).

Although this can happen with women of any age, it is common in women who are undergoing hormone replacement therapy after menopause. This sudden change in hormone levels can sometimes cause side effects, and vaginal bleeding is a common one.

Uterine fibroids are a type of abnormal muscle growth on the walls of the uterus. These fibroids are fairly common, with most women experiencing them at some point in their life. They usually occur in women during their reproductive years (x).

A side effect of uterine fibroids can be vaginal bleeding, as the lumps in the tissue get irritated or rupture.

Infection of the vaginal or uterine walls can lead to inflammation of the tissue. This can cause burning and vaginal bleeding if the infected tissue is irritated (x).

Although there are many different ways the tissue can be infected, sexually transmitted infections (STIs) are the most common. Infections are one of the more serious causes of vaginal bleeding. If you have any other symptoms, such as painful urination, you should contact your doctor immediately. The infection could spread and cause more serious health issues.

In some cases, vaginal bleeding can be a result of excessive stress or anxiety. This can cause abnormally long or short bleeding. It can also lead to alterations in hormone levels, which can also affect vaginal bleeding.

If you’ve felt any added stress and you notice disruptions to your normal menstrual cycle, you can consult with your doctor. In most cases, menstrual patterns will return to normal once the stress goes away.

If you notice any vaginal bleeding, consider if your weight has changed significantly before the symptoms appeared. Sudden changes in weight can sometimes lead to disruptions in the menstrual cycle, as well as vaginal bleeding.

These changes usually go away as your body adjusts to the new weight. However, you should consider supplements or speaking to your doctor if you notice that vaginal bleeding persists.

There’s a wide variety of different remedies for those looking to stop vaginal bleeding. Here are some of the most effective natural options, as well as medical treatments.

Chamomile is an herb that does a little bit of everything. It’s one of the oldest herbal remedies known to mankind, used in a wide variety of traditional herbal remedies. And one of its potential uses is to help treat vaginal bleeding.

There is research indicating that chamomile can be effective at treating the symptoms of vaginitis. This is a condition where the vagina is inflammed, and one of the symptoms is vaginal bleeding (x).

Chamomile may act to reduce inflammation in the vaginal tissue. This can help prevent internal vaginal bleeding. It is traditionally taken as a tea, but you can also use it in a more concentrated supplement form. This will give you a more potent effect, as well as a more standardized dose. And you’ll save money.

Chamomile has an excellent safety profile with few side effects. In high doses, it may cause some minor digestive issues.

Ginger, like chamomile, is used for a wide variety of health issues. It has a long history in traditional Chinese medicine, used to treat headaches, nausea and digestive issues. There is research showing that it can be an effective way of reducing heavy vaginal bleeding. This research involved heavy menstrual bleeding, not bleeding outside of the normal menstrual cycle. However, it is a promising herbal remedy for those looking to treat vaginal bleeding (x).

Like chamomile, ginger is often consumed in teas, or used as an ingredient in food. But you can also use it in a more concentrated supplement form. The benefits of using a ginger supplement are that it is more potent, so you may get more of an effect. And it’s easier to control the dose, so you can ensure that you are getting the same amount of ginger every time you take it.

Ginger has an excellent safety profile, even when consumed at higher doses. The main side effect is digestive issues.

Fennel is another excellent herbal therapy that has been used for thousands of years in traditional medications. It has been an ingredient in remedies for circulatory, respiratory and digestive issues. And there is evidence that it may also be a useful treatment for some cases of vaginal bleeding.

Fennel is effective in cases where women have hormone imbalances. It acts as an estrogen, so it may be able to help correct low levels of certain hormones. This may act to regularize the menstrual cycle and prevent bleeding that occurs at irregular times (x).

However, there are certain cases where fennel could actually worsen it. If your vaginal bleeding is a result of uterine fibroids, you should avoid fennel, as it may actually increase the risk of bleeding. The same is true of vaginal bleeding caused by infections.

Fennel is often used as an herb in food. But if you plan on using it to treat it, a supplement form is the best choice. It’s more affordable, and you can get a higher, more consistent dose. This will ensure you get the maximum therapeutic benefit.

Like chamomile and ginger, fennel is a very safe supplement, with few side effects aside from digestive issues.

In some cases, it may actually be caused by birth control pills. If you notice any changes in your menstrual cycle after beginning birth control, you should speak to your doctor (x).

Standard anti-inflammatory drugs, such as ibuprofen, can sometimes be an effective treatment for it. Take the medication before your period begins, and you may be able to lighten the bleeding (x).

Do note that these medications will not address any of the root causes of the bleeding, but merely treat the symptoms. And they will do little in cases of severe vaginal bleeding.

Vaginal bleeding is a common condition that can affect women of any age. And it can be caused by wide variety of medical issues. If you’ve experienced any abnormal bleeding, you may wonder what can be done to treat the symptoms.

Fortunately, there are multiple natural treatments available for women, such as chamomile, fennel and ginger. These have shown promise at reducing vaginal bleeding and regulating menstrual cycles. And if the vaginal bleeding continues after taking any natural supplements, don’t hesitate to contact your doctor. This could be a sign of a more serious health issue that requires medical attention.