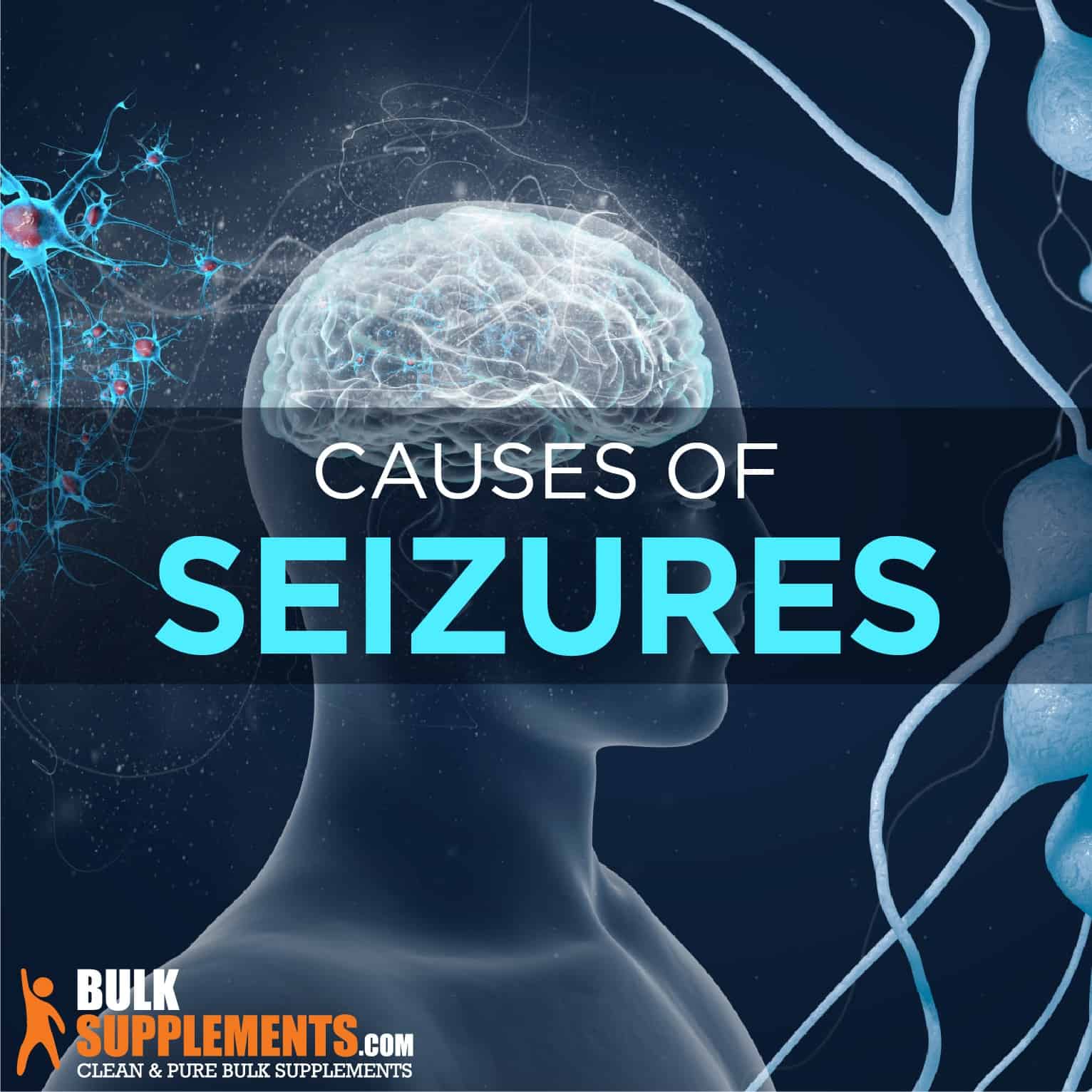 What is a Seizure?

Seizures are sudden, uncontrollable and abnormal changes in the brain’s electrical activity (x). These changes may go unnoticed and show no symptoms. But in other cases, it may cause dramatic and noticeable symptoms and behavior changes like convulsions, loss of consciousness and uncontrolled movement. When a seizure occurs, brain cell activity speeds up uncontrollably to about four times its normal rate, causing temporary changes in thinking, movement and behavior.

They typically last anywhere from 30 seconds to two minutes (x). Medical professionals categorize seizures that last for more than five minutes as a medical emergency (x). They can happen to an individual just once or they can recur. If they are recurrent, physicians refer to it as as epilepsy (x).

The brain relies on organized, coordinating electrical impulses that communicate with the rest of the body—the nerves, spinal cord and muscles—in order to function properly. When something disrupts this electrical activity, it can cause a seizure, a period of increased electrical activity in the brain. There are many different factors that can trigger a seizure, but most of the time they are idiopathic. However, the triggers and risk factors vary depending on the patient’s age (x, x).

Newborns may experience seizures because developmental complications, lack of oxygen during birth, low electrolyte levels and maternal drug use. Infants and older children may experience them from high fever, infections or even a brain tumor. Congenital conditions like Down’s syndrome or Angelmen’s syndrome may cause them in children or adults, as well as head trauma. Genetic factors may also play a role. Eldery patients may have them as a complication from a stroke, Alzheimer’s disease or trauma (x).

Sometimes a patient may have seizures in patterns or in certain situations. It’s important to keep track of the pattern in order to recognize the warning signs and be prepared for the episode as much as possible. Lack of sleep, electrolyte imbalance or very low blood sugar may trigger a seizure. Drug or alcohol use or withdrawal can also trigger symptoms in combination with other factors (x). Sometimes they may be associated with hormonal changes, such as menstruation, stress or certain medications (x).

Seizures are relatively common but researchers are not sure what causes them. They may be triggered by an illness, infection, head injury, high fever (in children), genetic conditions or stroke. Some seizures may signal an underlying condition and some can cause further injury. There are two categories, based on where the abnormal brain activity begins—generalized seizures and partial (focal) seizures (x).

In a clonic seizure, the patient’s muscles go through rhythmic spasmodic episodes, in which the muscles stiffen and relax very quickly over and over. They may last for a few seconds up to a minute. But sometimes these movements are a part of a tonic-clonic seizure and they can last for one to two minutes. Clonic seizures are more common in infants (x).

Muscle tone is the muscle’s tension in a resting state. This type causes an increase in muscle tone, so the muscles in the back, arms or legs contract, tense and stiffen. Usually a tonic seizure affects both sides of the body and most areas in the brain. It can cause a loss of balance if the patient is standing, but usually last less than 20 seconds and usually occur when the patient is asleep (x).

While tonic seizures increase muscle tone, atonic seizures reduce muscle tone. They are also called drop seizures because it may cause the patient to collapse, as the muscles suddenly become limp. It may affect the entire body or just parts of it, particularly the arms and legs. The head may drop and the eyelids may droop. Usually this type of seizure lasts for about fifteen seconds. However, some patients may experience several episodes in a row (x).

In a myoclonic seizure, the patient exhibits sudden muscle jerks or contractions, usually on both sides of the body. The muscles contract, jerk or twitch and then relax very quickly. It may affect one muscle or a group of muscles. Patients may experience a single episode or several in a short amount of time. However, even patients without epilepsy may experience this feeling. For example, someone may experience a sudden jerk or shock in the body that wakes them from sleep. This is normal and does not necessarily qualify as epilepsy (x).

An absence seizure is also called a petit-mal seizure. These are very short episodes that cause lapses in awareness. For example, the patient may have a blank stare or make subtle body movements like rapid blinking, lip smacking or eyes rolling back into the head. People who experience this disconnected from the environment around them. They are usually very brief, only a few seconds and sometimes others may think the patient is simply daydreaming. Absence seizures are more common in children (x).

A focal seizure results from abnormal electrical activities in one particular part of the brain, as opposed to a generalized seizure that affects both sides of the brain. However, a focal seizure can spread to other parts of the brain. Unlike a generalized seizure, the patient may show signs before it occurs, such as deja vu, fear, euphoria or changes in vision, hearing or smell. There are two categories depending on whether or not the patient loses consciousness (x).

This type of seizure occurs in one side of the brain. The patient does not lose consciousness or awareness of their surroundings. However, the patient may be unable to speak or move until the episode is over even though they are awake and aware. Other patients can speak normally throughout the episode and remember what happened. It may affect movement, sensations and emotions, as well as memory. Patients may feel sudden nausea, stomach pain, excess sweating or chills. Some patients even report distortions in time or out of body experiences (x).

Unlike a focal aware seizure, focal impaired awareness seizures affect consciousness. They affect larger areas in the brain than focal aware seizures. The patient cannot control their speech or movements and loses all awareness of their surroundings. Although the patient may be able to speak or move, they do not interact normally and their speech may not make sense. The patient can stand or move, but they appear to be in a trance (x).

The symptoms of a seizure range from mild to severe, depending on the type. Typically there are three parts to a seizure—a beginning, a middle and an end. The symptoms affect each patient differently and they may not notice each stage’s symptoms (x).

Sometimes the patient is aware that a seizure is coming, but some patients may not have any warning at all. They may have behavioral or sensational changes, but they are not actually part of the episode. However, an aura—the first symptom—is part of it (x).

The middle period begins from the first aura until the end of the episode. Similar to the beginning stage, the symptoms may affect the patient’s awareness, senses and emotions, as well as physical movement (x):

The end of a seizure triggers the postictal phase, the recovery period. Some patients recover quickly, but others may take longer depending on the type of seizure and area of the brain it affects. Just like the beginning and middle stages, the symptoms manifest as sensory, awareness and emotional changes, along with physical changes (x).

To diagnose a seizure, a physician asks about the patient’s symptoms and medical history, since there are several factors that may trigger them. Then the doctor may perform tests or scans to try to determine an accurate diagnosis, since the symptoms may be similar to other health conditions (x, x).

The doctor may take blood tests to check for chemical imbalances, genetic conditions, infections or low blood sugar. A spinal tap aims to measure pressure in the brain and check for infection in the cerebrospinal fluid. If the doctor suspects an issue with the brain or central nervous system, they may carry out a neurological exam to analyze brain activity. For example, they may use an electroencephalogram (EEG) to check for abnormalities in brain activity. Imaging scans can also create a clear image of brain activity. For example, MRI, CT, PET or SPECT are all common examples of imaging tests (x, x).

Treatment aims to prevent seizures or control how often the patient has them. Some patients need treatment for their entire lives and some may be able to refrain if their seizures stop over time. Treatment includes medication, surgery or even dietary changes (x).

This is the most common form of treatment. There are various medications available to help control seizures and individual patients may have different needs. It may take time to find the right medication and some of them may cause side effects. But most of the time, medication is an effective treatment and management tool. However, they do not fix the underlying problem (x, x).

For example, anti-epileptic drugs (AEDs) change the chemicals in the brain to stop seizures, but they do not cure epilepsy. Common types of AEDs include topiramate, oxcarbazepine, lamotrigine and sodium valproate. Sometimes patients may express concern with these medications because they can cause side effects—hair loss, hair growth, rashes, tremors and agitation (x).

In cases where neither anti-seizure medications or dietary changes are effective, a doctor may recommend surgery (x). The ability to use surgery as a treatment option will depend on the type of seizure and what part of the brain it affects. Specifically, surgery is more effective for patients whose seizures always start from one particular point in the brain. Before surgery, physicians perform tests to determine where the seizures start and then remove that focus point from the brain (x, x).

Patients may find that there are certain factors that can trigger their seizures. Identifying and avoiding triggers may go a long way in preventing seizures. Common triggers include stress, anxiety, fatigue or anxiety. Bright lights and hormonal imbalances may also increase the risk (x).

Studies state that resveratrol may be able to help prevent Alzheimer’s disease, which can trigger seizures (x). The protein may interfere with plaque formation that causes Alzheimer’s. It also has anti-inflammatory and antioxidant properties that can help protect the brain. With a doctor’s permission, take one resveratrol capsule per day as a dietary supplement.

5-HTP comes from another amino acid, L-tryptophan and it’s a precursor to serotonin, the neurotransmitter that relates to mood. Research states that supplementing with 5-HTP help balance chemicals in the brain and potentially reduce seizure severity (x). The recommended dosage for 5-HTP (griffonia seed extract) powder is 50 to 200 mg daily, with a doctor’s permission.

Acetyl L-carnitine HCL is well-known for its potential to benefit cognitive health. Studies have concluded that it can help improve age-related cognitive function, including memory and response to stress. As a dietary supplement, take 500 mg of acetyl L-carnitine (ALCAR) powder one to three times a day after consulting a physician.

A seizure is a neurological condition that occurs as a result of a disruption in the brain’s electrical communication signals. Seizures can be generalized or focal depending on what area of the brain that it affects. Symptoms of seizures include loss of awareness, confusion, detachment, memory loss and loss of control over bodily movement. There are a number of health conditions and factors that can trigger seizures, including lack of sleep, low blood sugar, electrolyte imbalance, birth defects and head trauma. Because they may be situational, identifying and avoiding triggers may help patients prevent them. Medication is the most common treatment, but dietary changes and surgery may also help. Supplements may also be a natural way to protect neurological function and promote brain health. They are not a cure, but research states that they may be effective. Consult a doctor before starting a supplement regimen.