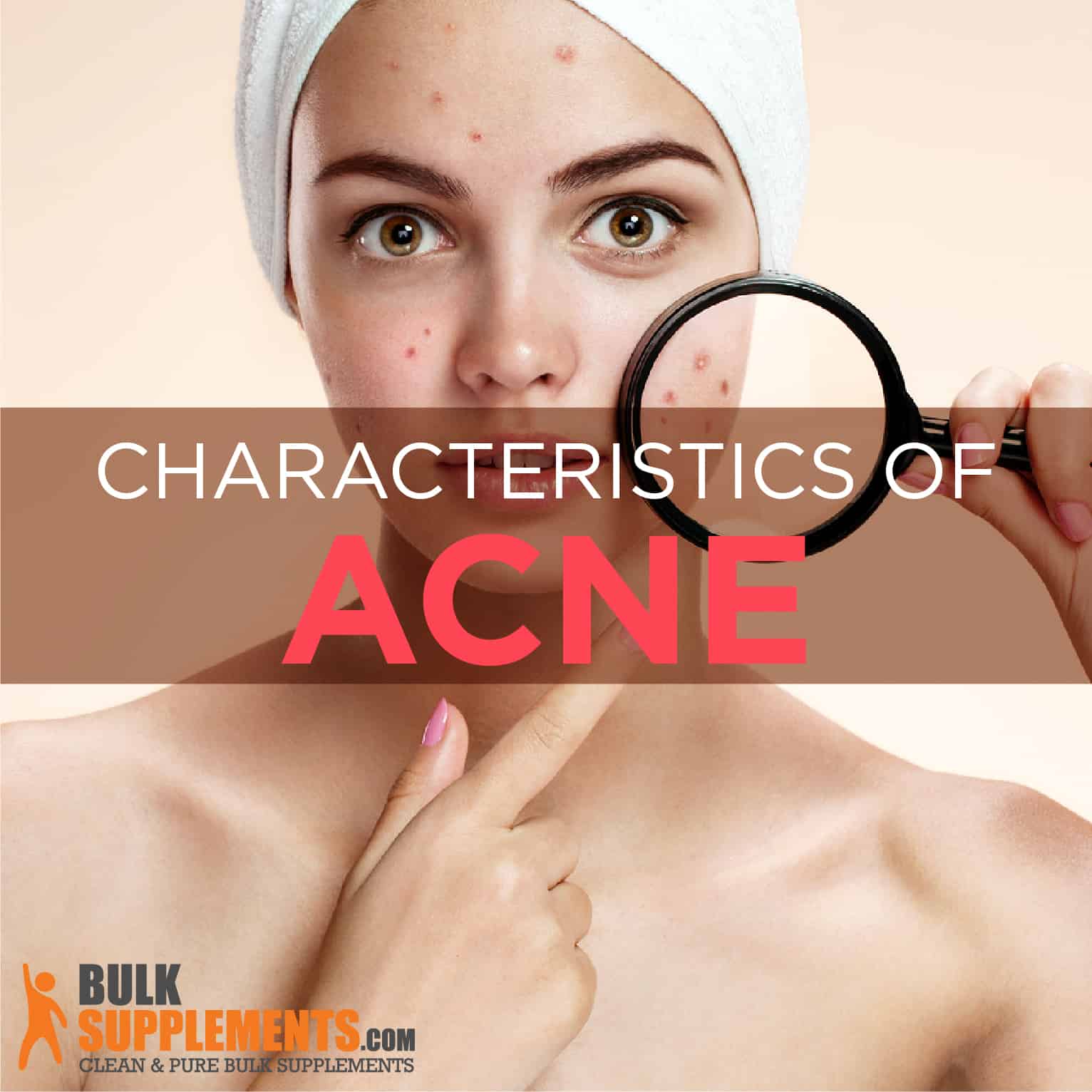 Everyone dreads acne. A single pimple can ruin a perfectly good day, especially if you’re a teenager with fluctuating self-esteem. Unfortunately, it happens to be the most common skin condition in the world. An estimated 80 percent of all people will develop acne at some point. While it’s most common in teenagers, anyone can develop it regardless of age (x).

But what is acne? It’s a disease that directly affects the skin’s oil glands. Essentially, when the pores in your skin produce too much oil, the hair follicles become clogged. Then bacteria enters the picture. The result is the formation of pimples and, in more extreme cases, pustules, papules and cysts.

While acne isn’t exactly life-threatening, it’s still a condition that requires treatment. It’s known to adversely impact a person’s quality of life, especially in the adolescent years. It can hamper a child’s emotional development. It can also leave permanent scars, which may cause a multitude of psychological problems (x).

Acne can be treated with over-the-counter medication and even some home remedies. If more severe forms of acne are present, then a visit to the doctor may be in order. Doctors usually prescribe antibiotics and retinoids to help you combat the condition. Sometimes, lifestyle changes may be necessary (x).

Inflammatory acne, on the other hand, is more serious. While it takes longer to develop, it stays longer and is harder to treat. It also often leaves behind scars. The inflammation is your body’s response to the threat presented by the bacteria in your acne. Inflammations can be aggravating and sometimes painful. Papules, or closed lesions, are formed from clogged hair follicles. Pustules are formed when a papule ruptures. Nodules, which form under your skin, can leave behind severe scars (x).

How do you know if you’re suffering from mild, moderate or severe acne? A quick self-examination in the mirror should do the trick.

If you have a small outbreak of whiteheads and blackheads (comedones) on your skin, you have mild acne. Blackheads are small, clogged dark spots on your skin, directly over your pores. The melanin (pigment) in your skin has reacted with the oxygen in the air and made your skin turn black. Whiteheads, unlike blackheads, are closed. The hair follicle gets clogged and closed by a white-or-yellow-colored head. In both cases, there’s a mild bacteria buildup.

In cases of mild acne, there’s little to no inflammation present. Also, the condition is usually limited to the face. To put it simply, if you have a few pimples here and there, you have mild acne.

Moderate acne is when the inflammation really begins to set in. The pimples start to become numerous. The acne may move from the face to other parts of the body — mainly the chest and back area.

The inflammation may become a point of concern. Your pimples may begin to swell up, turning into papules or small bumps. In some cases, the pimples may be filled with pus at the tip, which is known as pustules. If your acne has progressed to this stage, you should see a dermatologist.

Finally, there’s severe acne. This sort of acne is, well, severe, requiring medical treatment. In severe cases, patients have their faces covered in papules and pustules. Also, cysts and nodules will be present. Nodules are far larger and more dangerous than papules. They hurt and may leave behind permanent, visible scars.

When severe acne is present, it will spread to other parts of the body. The upper arms, back, shoulders and the chest are likely to be affected (x, x).

The most common variant of acne, and the one you’re likely familiar with is acne vulgaris. There are other, often more severe, variants as well. Acne conglobata, for example, is an inflammatory type that may persist for decades at a time. Other forms include acne fulminas, excoriated acne, chloracne and acne mechanica. Consult with your doctor if you think your acne is different or more persistent than normal (x).

Scars and acne go hand in hand. Acne causes wounds in the under-layers of the skin. When these wounds heal, scar tissue may be formed. The scars formed depend on the severity of the wound and the type of acne present. Some people have small, nearly-invisible scars, while others have large pockmarks (indented scars) on their face.

If you squeeze blackheads and pustules, you may end up causing scar tissue to form.

Atrophic scars are formed when a wound doesn’t heal properly and not enough connective tissue is made. A “dent” or “depression” is created in the skin and the scar forms around it. These types of scars are fairly common. If you squeeze your pimples, you may end up with these scars on your face.

Hypertrophic scars appear raised or bumped. They are formed by the production of too much connective tissue or collagen when acne wounds heal. These are fairly uncommon scars and are mainly found on the back and chest area.

Keloid scars are the rarest of them all. They are also formed when too much collagen is produced when a wound is healing. Unlike hypertrophic scars, though, keloid scars are not contained to the wound. They become bigger than the wound and will spread out to the surrounding area. They can be unattractive in appearance, though they aren’t harmful in nature (x, x).

An adult human body is said to have five million pores, with sebaceous oil glands at the base. These oil glands produce sebum oil, which moisturizes the skin and protects it. The sebum travels up to the surface of the pore from the gland via a minute channel called a follicle (the oil travels up the human hair). When a follicle gets clogged by too much oil, bacteria, sweat and dead cells, a blackhead, whitehead or a pimple may develop.

Hormonal imbalances are a primary cause of acne. Teenagers and pregnant women are especially susceptible to these imbalances. During puberty, adolescent bodies will produce large quantities of the sex hormone androgen. Androgen also ramps up the production of sebum in the body. The excessive oil causes the pores to get clogged up, with acne being the result. Because androgen is produced in more quantities in males, teenage boys are more likely to develop acne than girls.

Acne can worsen if you sweat a lot, wear clothing that doesn’t allow your skin to breathe, and pick and prod at developing lesions. Also, certain types of food can worsen this condition. For example, food with lots of sugar and carbohydrates like chips and bread exacerbate the problem. Sometimes conflicting medications, stress, hormonal fluctuations, genetic tendencies and even skin care products may cause a breakout (x, x).

The earlier you treat your acne, the less likely it is to scar. You may need to visit the doctor if your case is especially severe. People with mild acne usually turn to over-the-counter medications and home remedies to counter the condition. These remedies are both topical (applied to the affected area) and systemic (ingested). Of course, these kinds of treatments can take a long time to kick in and aren’t always effective.

Home remedies for acne vary wildly and aren’t always reliable. They include herbal alternatives, topical creams, ayurvedic tonics and even regular fruits and veggies. Herbal remedies, however, are proven to be effective by a clinical trial, though it’s slow acting (x). These include garlic, green tea extract and peppermint.

If your acne is severe, it’s best to go to the doctor. Your doctor will likely prescribe a combination treatment of retinoids and antimicrobials. Retinoids will prevent follicular blockage and decrease inflammatory lesions, while antimicrobials will kill off any bacteria. The treatment can last for several weeks and the results are slow to occur. In some cases, hormonal therapy and isotretinoin therapy may be required (x).

Doctors often recommend patients to wash their faces with soap containing benzoyl peroxide twice a day. They also recommend that you wear skin-friendly clothing, use water-based or noncomedogenic makeup and generally eat right and exercise. It is also best to avoid touching your face often or picking at your lesions (x).

In fact being too clean can actually create blemishes. Washing too often (more than twice daily or what is recommended by a doctor) can aggravate skin and make breakouts worse (x).

If You Have Acne, Avoid the Sun

Sun exposure can make acne worse. While spending a little time in the sun can provide temporary relief from pimples, prolonged exposure can induce excess sebum production in your body. Eventually, the condition will be worse than before. Don’t forget to put on sunscreen before venturing out (x).

Almost everyone struggles with acne at some point and you shouldn’t be overly concerned about it. It is normally easy to treat with over-the-counter medications and home remedies. Avoid picking at your lesions, wash your face twice daily with specialized face wash, and your acne should reduce significantly. If you believe the condition is moderate to sever, visit the doctor for combination medication therapy. Quick action will save you from permanent scarring.