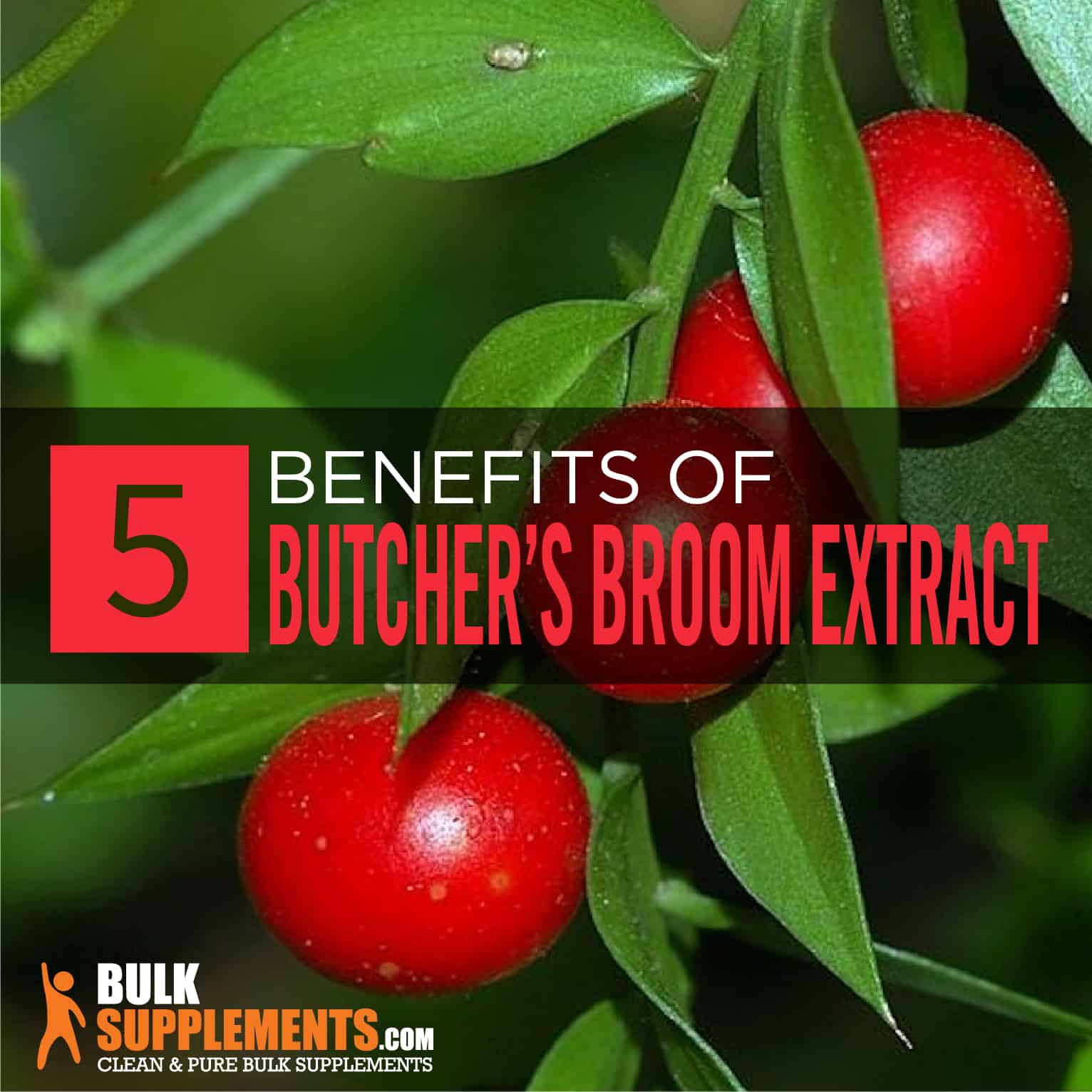 What is Butcher’s Broom Extract?

Have you heard of butcher’s broom extract? This plant is less commonly used than others, but it may still provide big benefits to your health. Similar to a holly bush in appearance, this evergreen is a cousin to the lily. In some cultures, people eat them like asparagus, though its flavor is more bitter. The roots and young stems of butcher’s broom can also be prepared and finely ground into a powder that’s easy to use and absorb.

Its name originates from its very first use. In Europe, these branches are bundled together to clean butcher’s blocks. Recent scientific studies show why — butcher’s broom contains compounds that are antibacterial. Apparently, these butchers understood the properties of this plant even without modern studies (x).

Today, butcher’s broom is primarily used to aid in circulation, and there are clinical studies that prove its effectiveness. However, traditional healers have used butcher’s broom for a number of ailments including hemorrhoids and other types of vein swelling. They have found that butcher’s broom works well against inflammatory conditions that affect arteries, veins and circulation problems.

How to Use Butcher’s Broom Extract

Butcher’s broom has a mild, almost sweet taste, and the fine powder can be mixed in water, juice or a smoothie. Since it’s a pure and finely ground powder, it can also be used to fill capsules for travel or to make a flavorful hot tea. Some evidence suggests that butcher’s broom is most effective when combined with vitamin C, so consuming this essential vitamin each day can help you see results (x).

Butcher’s broom can also be made into a tincture. To do this, soak the powder in alcohol (many experts suggest 90 or higher proof vodka for its purity and milder flavor) for a few weeks. Then you can use the resulting liquid as a supplement (x). It only takes a few drops of a tincture to make a dose, so use caution with your servings and adhere to all applicable laws.

Chronic venous insufficiency, also known as post-thrombotic syndrome, is a condition where veins do not circulate blood efficiently. This happens because the small valves inside the veins in the legs or the arms malfunction and allow blood to pool inside them instead of continuing to circulate. This causes the pressure in those veins to increase and sometimes burst. Varicose veins are an early sign that this condition may develop. It’s related to DVT, or deep vein thrombosis, which is a life-threatening blood clot.

Conventional medicine focuses on compression therapy, which can be somewhat effective, but is uncomfortable and can limit mobility. Butcher’s broom, on the other hand, is a pleasant and easy treatment that studies have shown to be effective. This supplement improves circulation and vascular tone, meaning that it doesn’t just control the condition, it improves the integrity of the veins themselves.

Current scientific studies suggest that it’s the saponins as well as the esculin compound in butcher’s broom that contribute to its efficacy (x).

Orthostatic hypotension occurs when you stand and suddenly feel like fainting. What happens is your blood pressure drops when you change body position. This circulatory condition can sometimes be caused by other medications, too little sodium in the diet, or too many carbohydrates because of certain blood sugar imbalances.

Most drugs that are used to treat this condition haven’t shown much promise, and patients are disappointed with the results. Butcher’s broom, on the other hand, has shown great benefit for those with this condition. One reason it may be better than the pharmaceuticals is that it works with the body to strengthen the veins and regulate blood pressure in any position. The prescription drugs often cause the opposite reaction of high blood pressure when lying down, and this is a significantly unfavorable side effect (x).

If you suffer from hemorrhoids, you know that this painful condition can be persistent and difficult to manage. Part of the reason hemorrhoids are such a challenge to heal is that the veins in the region are weaker and close to the skin. These conditions make them more prone to rupture.

Since butcher’s broom is so highly effective at improving the strength and tone of veins and overall circulation, it’s an ideal choice to help heal hemorrhoids. This herb can help to manage pain and inflammation. But most importantly, it speeds the healing of the tissues so you can regain comfort and proper function. Faster healing means less chance for infection as well. And don’t worry, you can take butcher’s broom orally, which is the most effective way of taking this treatment. There’s no need for topical administration (x).

In traditional folk medicine in Europe, butcher’s broom was used as a gentle laxative and several other abdominal conditions. While there are few current studies on butcher’s broom’s laxative effect, there is a great deal of anecdotal evidence to suggest that this is one of the least uncomfortable ways to relieve occasional constipation. Using butcher’s broom as a laxative dates back to Dioscorides in Greece during the first century. Since this herb is so gentle, you’re unlikely to experience pain or cramps that other laxatives may cause (x).

Varicose vein is a condition that has plagued many people. For some, they simply don’t like how they look. For others, they are painful knotted up veins that cause constant discomfort. Butcher’s broom is one of the best ways to address this condition since it’s so helpful to healing and circulation. It helps to strengthen the small valves inside of the veins as well as improving the condition of the veins themselves (x).

Butcher’s broom on its own has no known side effects, even for those who have taken high doses. Anecdotally, some people experience mild stomach discomfort or nausea, though these reports are rare. Some pharmaceutical mixtures contain butcher’s broom, and these have a higher incidence of side effects such as edema, nausea and abdominal pain (x).

Butcher’s broom contains saponins, which for some people may interfere with digestion. In small doses, most people experience no side effects from these compounds. On the other hand, those who are sensitive or who consume plenty of saponins from other sources may have slightly decreased absorption of nutrients from their meals (x).

To improve the function and health of your cardiovascular system, taking a butcher’s broom supplement is a very smart choice. From improving circulation, strengthening veins and managing blood pressure problems, this safe supplement can be used for an extended time. Studies have shown solid evidence that butcher’s broom can help with circulatory and venous conditions without causing harm even over long periods.