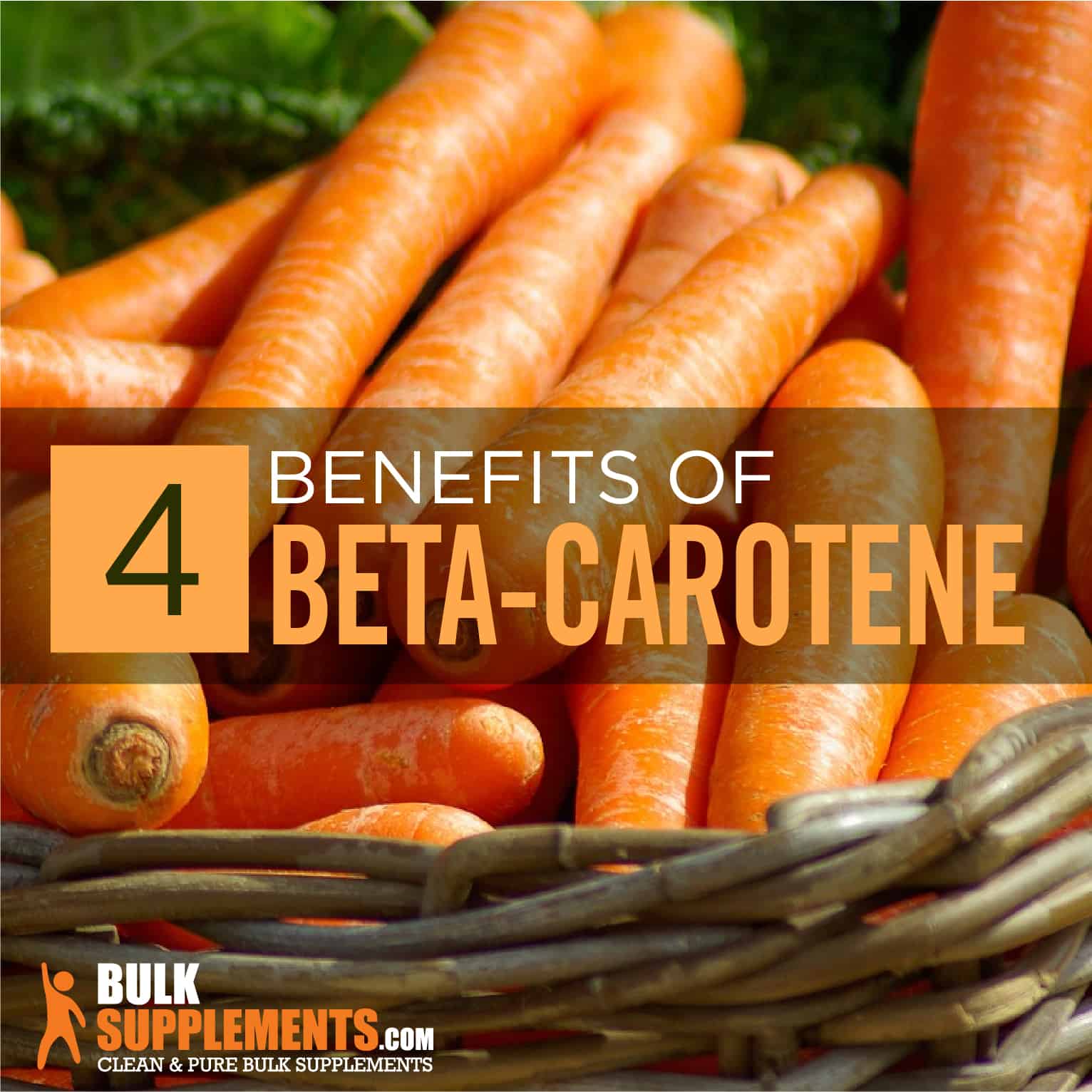 Beta-carotene is one of about 700 different plant pigments (carotenoids) present in fruit, vegetables, herbs and spices, giving them a bright orange color. Some examples are carrots, apricots, plums, peppers, chilies, pumpkin and sweet potatoes. Even green leafy vegetables like spinach have these pigments. The deeper the color, the higher the beta-carotene content (x, x, x).

A German pharmacist named Heinrich Wackenroder was the first to extract beta-carotene from carrots in 1831. The pigment was named “carotene” after the Latin word carota for “carrot.” Carrots are the richest known source of beta-carotene, though some of the nutrient are lost through food storage and cooking (x, x, x, x).

Beta-carotene is often written as β-carotene. Some also call it “provitamin A” because the body converts it into vitamin A. Vitamin A is critical for the body to function properly. Beta-carotene offers many health benefits of its own, too. It’s a powerful antioxidant that helps protect the lungs, eyes, skin, cardiovascular system and immune system.

Many foods contain beta-carotene and it is also an FDA approved nutritional supplement. People can purchase a beta-carotene supplement on its own or in combination with other ingredients. They come in capsules, liquid, topical and powdered form.

As a precursor to vitamin A, beta-carotene indirectly contributes to the many roles that vitamin A plays in the body. Vitamin A is important for the skin, brain, heart, inner ear, bones, lungs, kidneys and bladder. It also plays a key role in the reproductive and immune system (x, x, x, x, x).

It’s important that beta-carotene converts to vitamin A. But it also positively impacts our health directly, especially in people with poor nutrition. This is largely due to it’s incredible antioxidant capacity (x, x).

Eating fruits and vegetables high in beta-carotene on a regular basis supports lung health. It seems to help people maintain lung strength as they age by making up for some of the harm caused by cell-damaging free radicals (x).

Another important finding is the link between low levels of beta-carotene in the diet and an increased risk of lung cancer. Beta-carotene, with or without vitamin E, may reduce lung cancer risk, possibly by preventing DNA damage at the early stage of cancer development (x, x, x, x).

Beta-carotene is recognized as a nourishing eye health supplement. In fact, one influential study showed that daily supplementation with beta-carotene, vitamin C, vitamin E, copper and zinc can slow down age-related macular degeneration, the leading cause of blindness in adults (x).

Additionally, beta-carotene seems to help the eyes adjust to dim light and may protect them against cataracts (x, x).

Beta-carotene offers several benefits to skin when used over the long term. For example, it reduces symptoms of erythropoietic protoporphyria, a disorder which causes extreme pain and skin irritation on sun exposure. Using beta-carotene enables patients to spend all day outdoors without symptoms (x).

While beta-carotene can help minimize effects of erythropoietic protoporphyria and other other light-sensitivity disorders, it’s not an effective sunscreen. The antioxidants in it can, however, boost the skin’s defense against the sun’s UV rays and improve skin health and appearance (x, x).

It can also reduce the appearance of aging in skin. For instance, in a number of women over the age of 50, long-term, low-dose supplementation improved facial skin elasticity and wrinkles due to sun damage (x).

It also has potential to help people with a skin hardening condition called scleroderma (x).

Can Help Reduce Risk of Cancer

As we know, beta-carotene is an important antioxidant. One of the ways antioxidants help protect the body is by neutralizing compounds that can cause cellular damage. By preserving cellular integrity, beta-carotene might help prevent cancerous cells from proliferating (x, x, x).

Research findings suggest that a vitamin A or beta-carotene deficiency seem to be a higher risk factor for a variety of cancers. Fortunately, though, correcting the deficiency can help reduce that risk (x, x, x, x, x).

There is an important caveat, however. If you are a smoker or former smoker, some research suggests that supplements containing beta-carotene can actually increase your risk of certain cancers, such as lung cancer.

The relationship between beta-carotene and lung cancer is an interesting one. Despite the many positive findings, other studies found that amongst smokers and people working with asbestos, the risk of lung and other cancer increased with high-dose beta-carotene supplementation. The risk appears to be present even if someone already quit smoking (x, x, x).

Researchers are not sure how to explain these mixed study results. The way in which beta-carotene is absorbed in the body may differ in individuals, depending on dosage, other substances and nutrients present and other factors (x, x).

When converted to vitamin A in the body, it is important for bone growth, function of the ovaries and testes, as well as embryo development (x, x, x). It also ensures the health of the linings in body cavities and hollow organs, and the glands (x).

Long-term consumption of beta-carotene may lower the risk of heart disease and stroke (x, x, x, x). Low levels of beta-carotene and vitamin C are possibly linked to a greater risk of mild dementia and cognitive decline (x).

Beta-carotene may protect white blood cells in the lymphatic system against DNA damage leading to chronic diseases (x, x). In a study, people with a high intake of carotenoids including beta-carotene and lutein had a lower risk of Lou Gehrig’s disease (ALS) (x).

Consumption of beta-carotene may prevent Heliobacter pylori infection in the stomach and reduce or prevent premenstrual breast pain (x, x). It may even reduce the risk of diabetes and metabolic syndrome (a cluster of conditions including high blood pressure, high blood sugar, abnormal cholesterol levels and excess fat around the waist) (x).

Beta-carotene, taken with or without lycopene, may offer an immune system boost to people lacking these nutrients in their diet, especially the elderly (x, x). Moreover, in a group of HIV-positive people who usually have low beta-carotene levels, it seemed to boost the immune system. Here, white blood cells, CD4 count and other markers improved (x, x, x). In a study, patients with a sexually transmitted disease and lower beta-carotene levels were more likely to get infected with HIV upon exposure (x).

Beta-Carotene Side Effects and Dosage

Beta-carotene is FDA approved as a nutrient supplement. It is also an approved colorant for food products, cosmetics and medications (x). It is best to take 1,300 mg (scant ½ teaspoon) daily or as directed by a physician (x).

Beta-carotene is essentially safe and greatly lowers the chances of acute toxicity that might occur if using a direct vitamin A supplement. However, it is not without occasional side effects such as upset stomach, nausea and jaundice. These effects can be controlled by simply lowering the dosage, though.

Skin discoloration on palms of hands, soles of feet or face can also occur. This is not harmful, and will go away within a week or two after discontinuing use. It may also mean you have to lower your daily dosage (x). Rarely, someone can have an allergic reaction to beta-carotene. This will show as an itchy rash or bumps, peeling skin, swelling of the face, lips or tongue, pain or a tight feeling in the chest or difficulty breathing.

Frequent smokers or drinkers should consult with a health care professional before considering this supplement. Women who are pregnant or nursing and individuals expected to undergo heart surgery should also avoid beta-carotene.

Before taking beta-carotene supplements, consult with your doctor if you are:

Beta-carotene, a key nutrient and antioxidant in our diet, is important for human health. For one thing, it has proven benefits for the immune system and reduces free radical damage. But it is also an important source of vitamin A for the body, which is necessary for the proper working of many bodily systems. Used over the long term, beta-carotene may lower the risk of cancer, heart disease, cardiovascular disease and chronic illness.