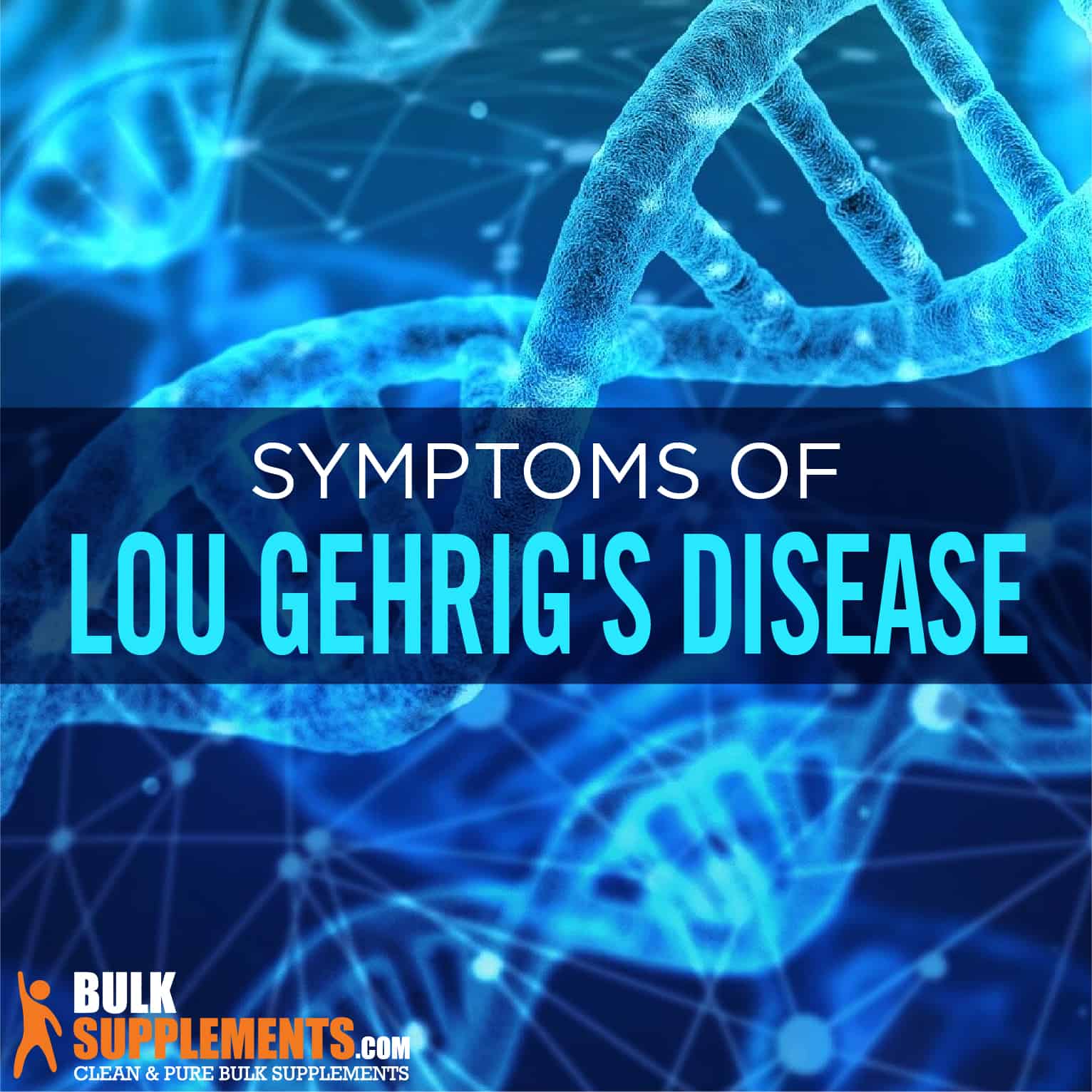 What is Lou Gehrig’s Disease (ALS)?

Lou Gehrig’s disease, also known as amyotrophic lateral sclerosis (ALS), is a rare neurological disease that affects the muscular system by killing nerve cells. These cells are responsible for sending messages in the nervous system. When they die, movement and cognition are impaired (x).

The disease often begins in the hands or legs with twitching and muscle weakness. A progressive disease, ALS slowly kills more nerve cells and results in other symptoms such as slurred speech and difficulty swallowing (x).

Eventually, patients lose voluntary muscle control and are unable to walk. They may also be unable to swallow. End stage ALS can lead to near complete paralysis.

ALS and dementia are often linked, and patients with ALS may show signs of cognitive decline (x).

No Known Cure for ALS

ALS is an incurable fatal disease, with the majority of patients dying from the disease within four years. While there is no known cure for the disease, there are a number of treatments that may possibly slow the progression of ALS.

Most treatments focus on reducing symptoms and improving quality of life. Patients with ALS often struggle to move and eat on their own. There are a number of drugs that can help improve movement and make swallowing easier.

Lou Gehrig’s disease is inherited in a small number of cases. However, in most cases, the cause of the disease is unknown. There is no clear theory on how to prevent ALS.

There is some preliminary research that eating certain foods, such as carrots, could help prevent ALS (x). However, more research is necessary to understand how ALS can be prevented.

ALS can develop quickly in some patients, although symptoms can take years to exhibit in others. Here are some of the most common symptoms of Lou Gehrig’s disease (x):

Fatigue is also common with ALS, with patients noticing a drop in energy levels. Many of the signs of ALS appear in the hands, as patients have difficulties coordinating their movements.

As the disease progresses, ALS can cause muscle atrophy. Eventually, patients are unable to walk or move without assistance; many patients may also be unable to speak or swallow (x).

Research is still determining if Lou Gehrig’s Disease is primarily environmental or genetic. Around 5 to 10 percent of ALS cases appear to transmit in families. The causes of other cases are still unknown, although researchers have suggested a number of potential causes.

Others argue that ALS may be caused by an immune response by the body. Your immune system normally targets only foreign or sick cells in the body. But if the immune system is not working properly, it may begin to attack healthy cells in the nervous system, thus leading to Lou Gehrig’s disease (x).

There may also be environmental causes for ALS, such as smoking (x). Smoking can lead to mutations, which can potentially cause Lou Gehrig’s disease.

There is no known method of preventing the development of ALS. Some early research has shown that foods containing a compound called beta-carotene may help prevent ALS.

There are a number of different medicines used to treat the symptoms of ALS. There are also supplements that some patients try to reverse ALS naturally. However, no medicines or supplements are proven to reverse the course of the disease.

There is still no known cure for Lou Gehrig’s disease, although there are some medicines that may slow progression of the disease. Riluzole is a drug that may be effective at slowing development of ALS (x).

Other drugs are used to treat the motor symptoms of ALS. Drugs such as baclofen and diazepam may help manage spasticity — a condition where the muscles continuously contract (x).

Patients with ALS often have problems swallowing. Drugs such as trihexyphenidyl and amitriptyline may be able to make eating and swallowing easier, although they can do little to slow the progression of ALS (x).

As the disease develops, most patients will require extra care, as they cannot move or eat on their own. Most patients will be confined to a wheelchair and may be unable to speak. At this stage of the disease, palliative care is the only treatment option remaining (x).

Although there is still no known cure for ALS, researchers have developed new drugs that show some promise in treating or slowing the progress of the disease.

One drug called telbivudine helps maintain proper protein function in nerve cells. This may prevent nerve cells from dying and can delay some of the motor symptoms that develop with ALS (x).

Although promising, this treatment still needs to be tested in humans, as the research was conducted in mice. It may also only slow the progression of the disease, so it may do little in patients with late stage ALS.

Patients with ALS must manage the disease and reduce symptoms in order to live a quality life. Patients often receive assistance from nurses, especially in the late stages of the disease, when patients are unable to walk or eat on their own.

One of the most common symptoms patients with ALS have is difficulty swallowing. At first, this may make eating slightly more difficult. However, as the disease progresses, patients with ALS may be completely unable to feed themselves or eat solid foods (x).

How Quickly Does ALS Progress?

ALS is a fairly fast acting disease, and many patients quickly develop motor symptoms that affect daily life. However, disease progress varies widely, with some patients dying within a few years while others live over a decade (x).

This disease is fatal for most patients. Nearly half of patients with ALS die within three or four years of developing the disease, and only 10 percent live longer than 10 years (x). However, there is evidence that better clinical management has led to an increased lifespan for patients with ALS (x).

Medication can only slow the progress of this disease. However, there are a number of supplements that may relieve symptoms of patients with Lou Gehrig’s disease and improve quality of life.

Here are a few of the most commonly used supplements to help manage Lou Gehrig’s disease symptoms.

Serine is an amino acid that is essential for building proteins in the human body. L-serine, a version of serine, may limit inflammation in the brain and protect people from dementia.

Studies have shown that L-serine powder may slightly slow disease progression in those with ALS. These results are still preliminary, and the exact mechanism of action is still unknown. However, they show that L-serine is a well-tolerated and possibly effective means of slowing development of the disease (x).

Creatine is a molecule widely used by bodybuilders and athletes to improve performance and boost energy levels. Because ALS leads to weakened muscles, researchers have suggested that creatine may be effective in boosting muscle strength in patients with ALS.

Studies have shown mixed results on the efficacy of creatine HCL powder in patients with ALS. Some patients reported that they felt less fatigued while taking creatine. However, further testing did not always confirm the patients’ accounts (x). More research is still needed to see if creatine has a reliable effect in ALS patients.

Still, creatine is safe and generally tolerated well by patients with few common side effects. It may also be able to boost mood and alleviate depression (x).

L-carnitine is an amino acid used by the body to build proteins. It’s crucial for a wide range of bodily functions, and it may be able to boost energy levels by increasing fatty acid synthesis.

Research also indicates that L-carnitine is a safe and possibly effective way of reducing symptom burden in patients with ALS. It improved ability to swallow, use utensils and walk (x). These symptoms are quite common in ALS, and they have a significant impact on a patient’s ability to engage in day to day activities.

More research is still needed to determine how L-carnitine affects patients with ALS, as well as the best dose. But the early research has praised that the supplement is a viable way of improving quality of life in patients with ALS.

Omega 6 supplements are taken for a wide range of reasons, from improving cardiovascular health to aiding brain health. These supplements may also be able to improve symptoms in some patients with Lou Gehrig’s disease.

More research is needed to justify if these results translate to human patients for ALS. However, omega 6 supplements are well tolerated and have few side effects. In sum, they offer a low risk supplement for patients with ALS.

Resveratrol is a compound found in red wine that has been shown to have a number of positive effects on cardiovascular health. In fact, it increased survival times in mice. It also preserved the function of spinal neurons. As a result, mice had fewer symptoms that affected their ability to move (x).

These findings are preliminary, and they may not apply to humans. However, they may infer that resveratrol is a promising supplement for addressing some of the motor symptoms of ALS.

Lou Gehrig’s disease is a progressive disease that affects movement, cognition and speech. Although disease progression varies case by case, the disease is incurable, with most patients dying within three to four years.

Although there is no cure for the disease, there are a number of medicines that can slow the disease and improve symptoms. There are also multiple supplements that can help improve quality of life, such as creatine, L-carnitine and L-serine.