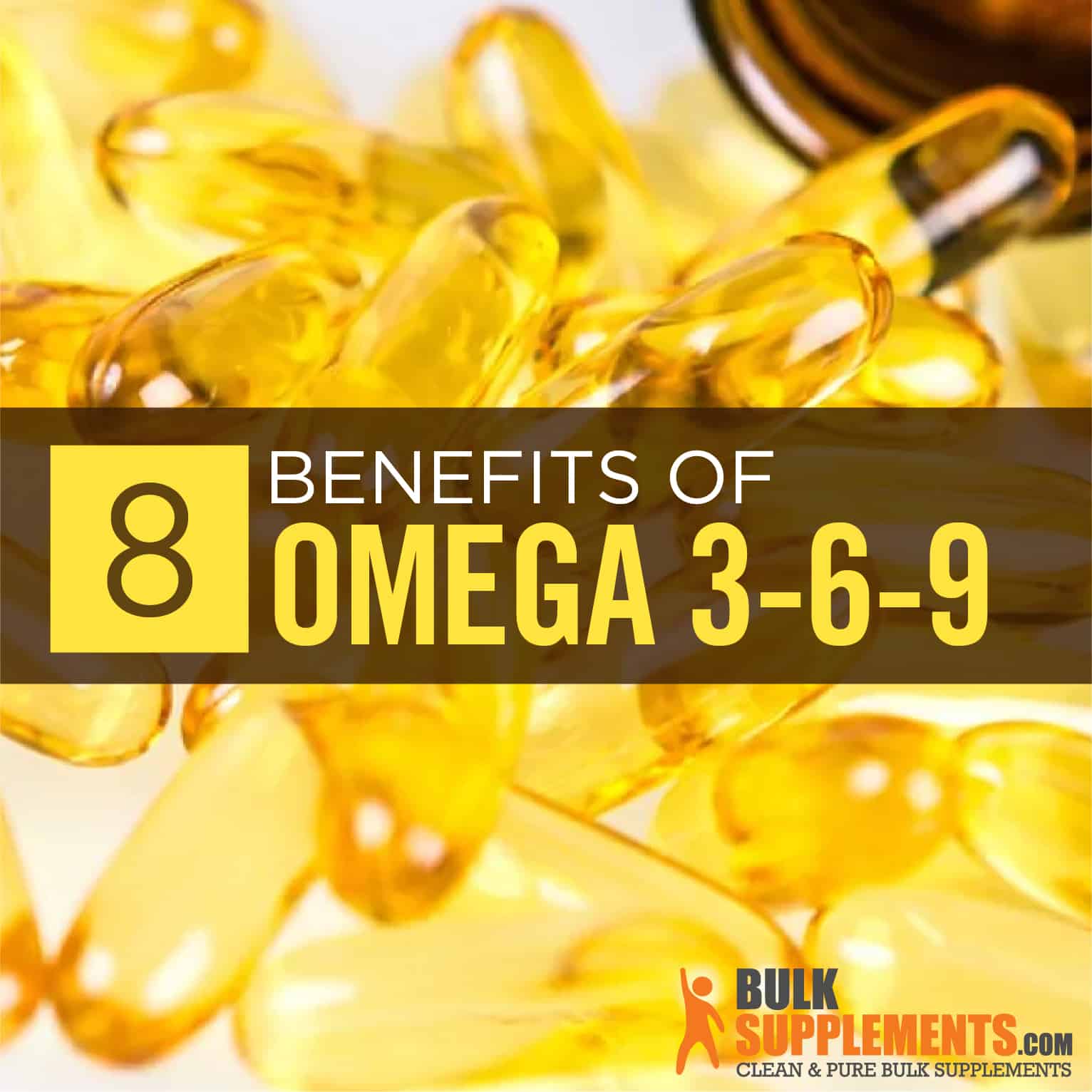 Fatty acids are the building blocks of the fat in our bodies and in our food. The food we eat, if it contains fat, is broken down in our bodies into fatty acids so they can be absorbed. There are many types of fatty acids. Omega-3, omega-6 and omega-9 are three of them.

Why are fatty acids made into supplements? While fatty acids are abundant in food, the types found in the modern western diet are no longer ideal. The goal of an omega 3-6-9 fatty acid supplement is to provide fats in a ratio that promotes health and well-being.

When talking about fatty acids, omega-3s get most of the attention. This is because they play important roles in the body and some people may not be getting enough of them.

Types of dietary omega-3 fatty acids and their dietary sources include:

ALA is an essential omega-3 fatty acid because it must be obtained through diet. Small amounts of ALA can be converted into EPA and DHA in the body. But since EPA and DHA have such important roles, some people choose to directly consume EPA/DHA-rich foods or supplements. Much of the research on omega-3s focuses on EPA and DHA.

High triglycerides are a risk factor for heart disease, and research shows that those who eat two servings of fatty fish per week or take a EPA/DHA supplement have lower triglyceride levels. It also reduces markers of inflammation that can lead to coronary events like heart attack or stroke. In addition, just as some people take aspirin for their heart to reduce blood coagulation, EPA and DHA work in the same way (x, x, x).

EPA/DHA supplements may help promote heart health in another way too. Extra inches around the belly is a risk factor for heart disease, and studies show that EPA/DHA can help reduce waist circumference when combined with other healthy lifestyle habits like exercise (x, x).

Despite these effects of EPA and DHA on the cardiovascular system, researchers are still trying to determine the extent to which this prevents death from heart attacks and strokes. It seems to reduce major occurrences in some people, but not others (x).

Omega-3s, particularly DHA, are critical for the proper development of the brain. During the third trimester of gestation, DHA quickly accumulates in fetal tissue, especially the brain and retina. Adequate DHA intake in fetal and infant brains is associated with better cognitive skills. One study even found that infants of mothers who took DHA supplements during pregnancy performed better at problem-solving tests at 9 months old (x, x, x).

The National Institutes of Health recommends that pregnant women eat 8 to 12 ounces of EPA/DHA-rich fish per week. It cautions, however, that some fish may contain harmful mercury. Lower-mercury varieties include salmon, trout, sardines and herring (x).

Later in life, omega 3 fatty acids could help protect against dementia. A study, for example, found that patients with Alzheimer’s had lower serum levels of DHA and EPA compared to people without the disease. Research is still inconclusive, but it appears that fatty fish consumption (and hence higher dietary intake of EPA/DHA) plays a role in brain function even through adulthood (x, x, x).

Studies show a potential benefit of EPA and/or DHA on several mental health issues including depression, ADHD, bipolar disorder, borderline personality disorder and schizophrenia. This may be due in part to the anti-inflammatory effect of omega-3s, as well as the effect these fats have on cell membranes. Even better, the benefits seem to apply to both children and adults (x, x, x).

Omega-3s are considered anti-inflammatory. Inflammation contributes to the onset and complications of many conditions like the ones already mentioned (heart disease, Alzheimer’s and some mental disorders), as well as other conditions like arthritis. EPA and/or DHA can help reduce inflammation and therefore the risk of some diseases (x, x, x, x).

EPA and DHA supplementation might help prevent onset of asthma attacks in people who are susceptible. Some studies are promising. A review of 11 studies that included nearly 100,000 people, however, found that evidence is still inconclusive and more research is necessary (x, x, x).

Omega-6 fatty acids are a little more controversial. They have a bad reputation due to the increasingly high ratio they represent in our diet. It’s believed that humans evolved to thrive on a diet that had anywhere from a 1:1 to a 4:1 ratio of omega 6 to omega 3 fatty acids. In other words, at most, early humans only ate 4 times as much omega-6. Nowadays, we eat closer to a 16:1 ratio (x, x).

Omega-6 fatty acids play an important role in the body, but they also happen to be pro-inflammatory. That’s not a problem when you’re eating roughly the same amount of anti-inflammatory omega-3 fats. When you’re eating 16 times more pro-inflammatory fat, however, problems arise. These problems include conditions associated with inflammation like heart disease, diabetes, autoimmune diseases and cancer (x). As a result, dietary recommendations focus on rebalancing the ratio of omega-6 to omega-3 fats.

Types of dietary omega-6 fatty acids and their dietary sources include:

The roles and benefits of omega 6s include:

These fats play an important role in producing other compounds called eicosanoids, which are biologically active lipids (fats). The job of eicosanoids is to promote and regulate the normal inflammation process of the immune system (x).

Despite the inflammatory nature of omega-6 fatty acids in general, dietary GLA may help reduce the inflammation of rheumatoid arthritis. Some studies show this effect while other research suggests GLA may need to be taken with EPA/DHA to work. In addition, this therapy may not work for everyone (x, x).

Studies on CLA supplementation find that it can help people lose small amounts of weight or gain a bit of muscle mass (x). It’s found in the meat and milk of grass-fed ruminant animals like cows, sheep and goats. This is partly why some people prefer to eat grass-fed meat and dairy products.

Omega-9 fatty acids are monounsaturated (meaning they only have one double bond, unlike omega-3 and -6) and are considered “non-essential” because your body can make them naturally. However, consuming additional omega-9s through diet can be also beneficial. One of the most common dietary omega-9 fats is oleic acid. Olive oil, macadamia nut oil and avocados are all good sources.

Of the common omega-9 fats, the benefits of olive oil have been the most documented. Many studies link consumption of olive oil to cardiovascular health. Research shows it can help reduce risk factors for heart disease. For example, it can help reduce “bad cholesterol,” raise “good cholesterol,” lower blood pressure and improve insulin sensitivity. It also is anti-inflammatory (x, x, x, x, x).

Omega 3-6-9 Side Effects and Dosage

No specific recommendations for dietary or supplemental omega-6 or omega-9 fatty acids have been established.

The National Institutes of Health established a guideline for one of the types of omega-3 fatty acids, ALA. It is recommended that women get 1.1-1.4 grams/day and men get 1.6 grams/day (x).

As a dietary supplement, take 3 softgels once or twice daily, or as directed by a physician.

Some side effects of omega 3-6-9 may include minor stomach upset such as bloating or burping. If nausea persists, reduce dosage or discontinue use as needed. While allergic reactions are rare, contact a doctor immediately if symptoms of itching, swelling or rash appear.

We live in an inflammatory world. Taking a supplement that combines omega 3-6-9 can help balance the intake of fats. Increasing the amount of omega-3 fatty acids relative to omega-6 can provide benefits to the heart, brain, joints and overall sense of well-being.