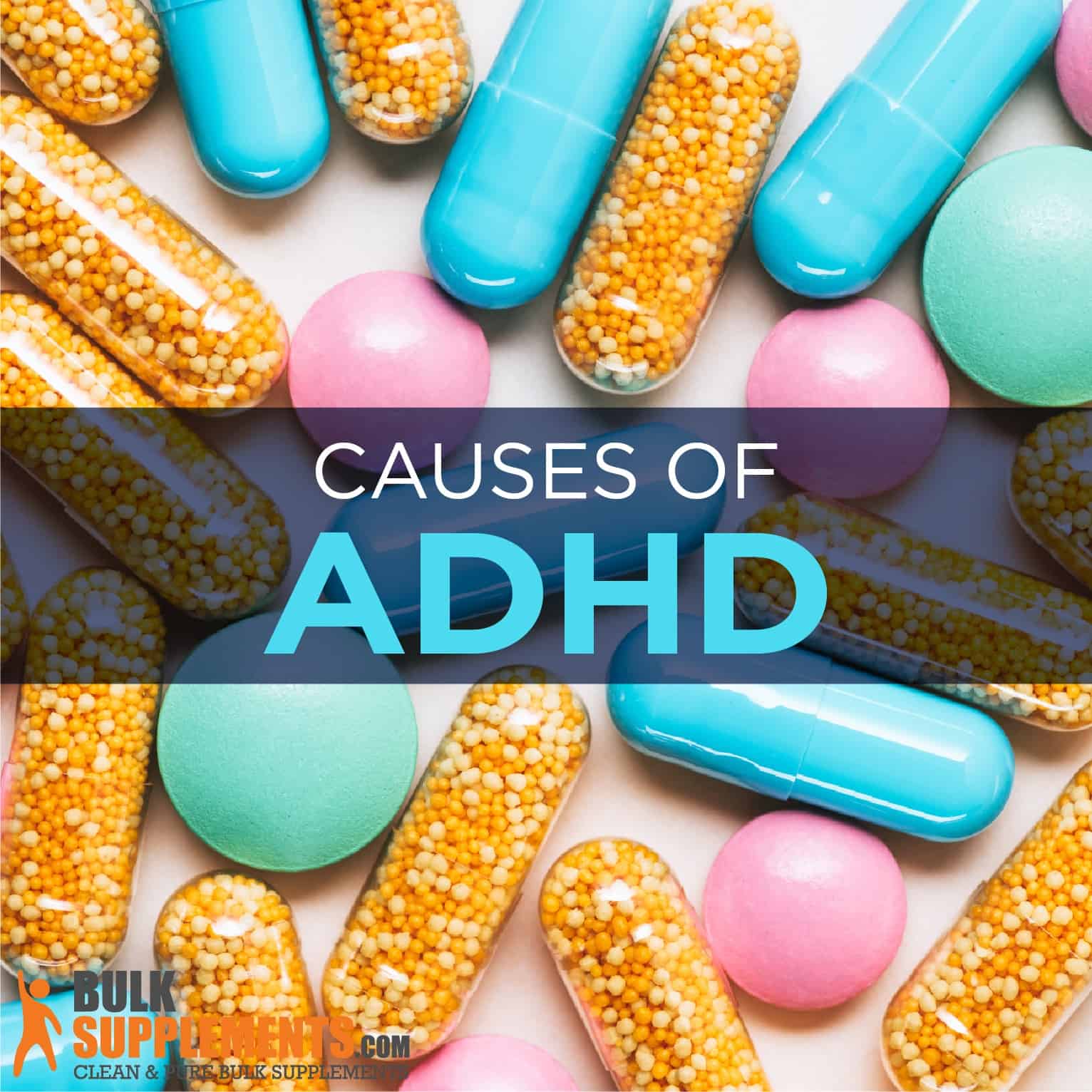 Attention deficit hyperactivity disorder (ADHD) is a neurological and behavior-related disorder that causes above-normal levels of energy and impulsiveness. People with ADHD find it difficult focusing on a particular task, paying attention and have challenges sitting still.

Although it is referred to as adult ADHD, it occurs in both children and adults. It usually begins in early childhood and is detected during a child’s early school years (x). It is one of the most commonly diagnosed mental disorders in children, as 6.4 million of American children between the ages of 4 and 17 have been diagnosed with it (x). Symptoms usually appear around the ages of 3 and 6 and can continue through their teen years and well into adulthood (x).

The National Institute of Mental Health noted that there is an increasing number in the diagnosis of ADHD in children and the reason is unclear. According to NIMH, 9 percent of children between ages 13 and 18 in America are affected by ADHD. In fact, research shows about 60 percent of kids who had ADHD still exhibit the symptoms as adults. Also, males are three times as likely to be diagnosed with ADHD compared to females (x). This could occur because boys are usually hyperactive in their early years.

When ADHD is left untreated in adults, it can negatively impact different aspects of their life. Adult ADHD can cause trouble managing time, poor school or work performance, unstable relationship, forgetfulness and low self-esteem, holding down jobs, setting goals and addictions.

You’ve probably heard of the terms ADHD and ADD, and wondered about their difference. The term ADD (attention deficit disorder) is outdated. It was a term that was used to refer to those who had problem concentrating, but aren’t hyperactive. Predominantly inattentive, a type of ADHD, has been used to replace ADD. The term ADHD was officially introduced in 2013 to serve as the overarching name of the condition.

To ensure the diagnosis of ADHD is more consistent, doctors have categorized the conditions into two types of behavioral problems. They are predominantly inattentive ADHD and hyperactivity and impulsivity ADHD.

Some people with ADHD could exhibit some symptoms that fall into both categories or otherwise.

As the name suggests, children that exhibit these symptoms have difficulty focusing. Other signs of inattentiveness include (x, x):

When most people hear of the term ADHD, the symptoms they think of is hyperactivity. This specifier means the child exhibits excessively high levels of activity and is restless. The main symptoms to look out for in the hyperactivity and impulsiveness category are (x, x):

These symptoms of hyperactivity and impulsiveness can lead to them having problems with discipline, social interaction and achievement in school.

Symptoms of ADHD sometimes persist from childhood, through teenage years to adulthood, and they interfere with daily functioning. Here is a list of symptoms associated with ADHD in adults (x):

The National Institute of Mental Health estimates that almost all children with symptoms of ADHD are usually diagnosed during elementary school. However, some people get well into their adulthood or adolescence before receiving one.

There isn’t a simple test that can diagnose ADHD in you or your child. It would involve a detailed diagnostic evaluation carried out using the official ADHD diagnostic guide used in the United States, called The Diagnostic and Statistical Manual of Mental Disorders (DSM-5). Diagnosis would also involve physical examinations, a series of interviews, information gathering from personal and family medical history and reports from significant people like family, teachers, caregivers and partners.

Diagnosis in Children and Teenagers

To qualify for a diagnosis of ADHD, your child will have to satisfy a set of strict criteria. They include (x):

It is more difficult to diagnose ADHD in adults because experts disagree on whether the symptoms used for diagnosis in children also apply to adults. In general, a diagnosis will rely on (x):

Despite how common ADHD is, the exact cause of it is not yet clear to researchers. However, it is believed that a combination of factors is responsible. They include:

ADHD is considered to be a hereditary disorder as it tends to run in the family. Research gives an estimation of over 70 percent genetic contribution to ADHD (x). It further shows that the close relative of a child with ADHD is likely to have the disorder themselves. Despite this strong genetic link, the way ADHD is inherited is complex and likely is a combination of several genes and environmental factors (x, x).

Researchers have identified some structural and functional differences in the brain of individuals that have ADHD from those without it. For example, findings involving brain scans have indicated that individuals with ADHD have smaller gray matter volume. Gray matter plays a vital role in muscle control, self-control, speech and decision making (x, x).

Researchers also show that imbalance in the level of dopamine, a chemical that helps trigger emotional responses and mood, is also a factor for ADHD (x).

Exposure to Substance in Utero

The health and habit of a mother during pregnancy increases the risk of a child developing ADHD. Here’s what research has to say:

The journal The European Child Adolescent Psychiatry published a study that shows a relationship between maternal smoking during pregnancy and the development of ADHD in the child (x). Besides, the study also noted that early exposure to lead and other chemicals like PCB also increases the likelihood of the child having ADHD (x).

A 2018 study has found that mothers that are involved in the regular use of alcohol dose during pregnancy are more likely to have children with ADHD (x). However, another study carried out in 2017 showed that maternal alcohol usage doesn’t necessarily qualify for an ADHD diagnosis in their offspring (x).

Traumatic brain injury and other impediments to normal brain development is another possible root cause of ADHD (x). It appears that this injury to the brain can cause learning and attention problems, as well as impulsive behavior.

The most common treatment options for ADHD includes (x):

Your doctor can prescribe medications that’d affect your brain chemicals to enable you to have better control of your actions and impulses. It is the most common treatment for ADHD, and they are grouped into stimulants and non-stimulants.

One might think it is counterintuitive prescribing a stimulant to a hyperactive patient. However, it can help increase attention span and cut down on hyperactivity and impulsiveness (x). They can boost the levels of neurotransmitters in the brain. They are usually fast-acting, and an estimated 70 percent of individuals on it showed reduced ADHD symptoms while on them.

The most common types of stimulants are:

If you notice any side effects with the use of stimulants, it is important you report these symptoms to your health practitioner so the prescriptions can be adjusted until the appropriate therapeutic dose is discovered (x).

While stimulants are usually the first line of medication doctors prescribe for treating ADHD, they don’t usually work on everyone, either as a result of an existing health problem or a severe side effect. Some non-stimulants can increase the levels of norepinephrine in the brain, but they work slower than stimulants do (x). Types of non-stimulants include:

This type of treatment is directed toward changing behavior (x). It also comes with the plus of treating additional problems that might appear with ADHD such as anxiety. Some of the therapies used include:

This involves working with a therapist who uses behavioral management to help the patient establish social skills, learn how to plan and structure activities and encourage them to learn new skills that would help them cope with their ADHD.

Therapists can provide specifically tailored training and educational programs that aim at teaching parents how to respond to often-difficult behaviors that can accompany ADHD (x).

This involves working with a counselor or therapists that’d enable them to better understand their ADHD and learn better ways of handling emotions and frustrations. They get an avenue to address issues resulting from living with ADHD, such as relationship issues, low self-esteem and shame.

People with ADHD are usually deficient in some essential nutrients when compared to their peers, and zinc is one of them. Zinc is an essential mineral that plays a vital role in brain function. Deficiency in zinc results in symptoms similar to those of ADHD, such as delayed cognitive development and inattentiveness. Research has shown that the dietary supplementation of zinc can help improve the symptoms of ADHD.

Supplementation with omega-3 can help improve cognitive function in adults and children, as it aids the protection of brain tissue and enhances brain cell communications. A 2017 review of 16 randomized controlled trials showed that participants who were placed on essential fatty acids (EFAs) supplements showed improvement in ADHD symptoms.

Ginkgo biloba has been used for years for improving memory, brain functions and increasing mental alertness. It contains chemicals called terpenetrilactines that increases the levels of the neurotransmitter dopamine in the brain. A 2013 study reported that after a daily dose of 240 mg of Gingko biloba for a period of three to five weeks, the subjects showed improvement in ADHD symptoms.

ADHD symptoms also include sleep problems and disorders. Also, sleep problems could arise as a side effect of the prescribed stimulant medications for treating ADHD. Supplementing with melatonin may help regulate the sleep-wake cycle of those with ADHD. A 2019 study spanning for over four weeks showed 60.8 percent of the 74 participants taking the stimulant methylphenidate had a better quality of sleep after doses of melatonin.

ADHD is a mental health disorder that affects self-control, attention and ability to sit still. The symptoms are categorized under its two broad types — inattentiveness and hyperactivity and impulsiveness. ADHD can be caused by genetics, exposure to harmful substances in the womb and brain injuries. Treatment options available includes medications, therapies and supplements like omega-3, zinc and melatonin.