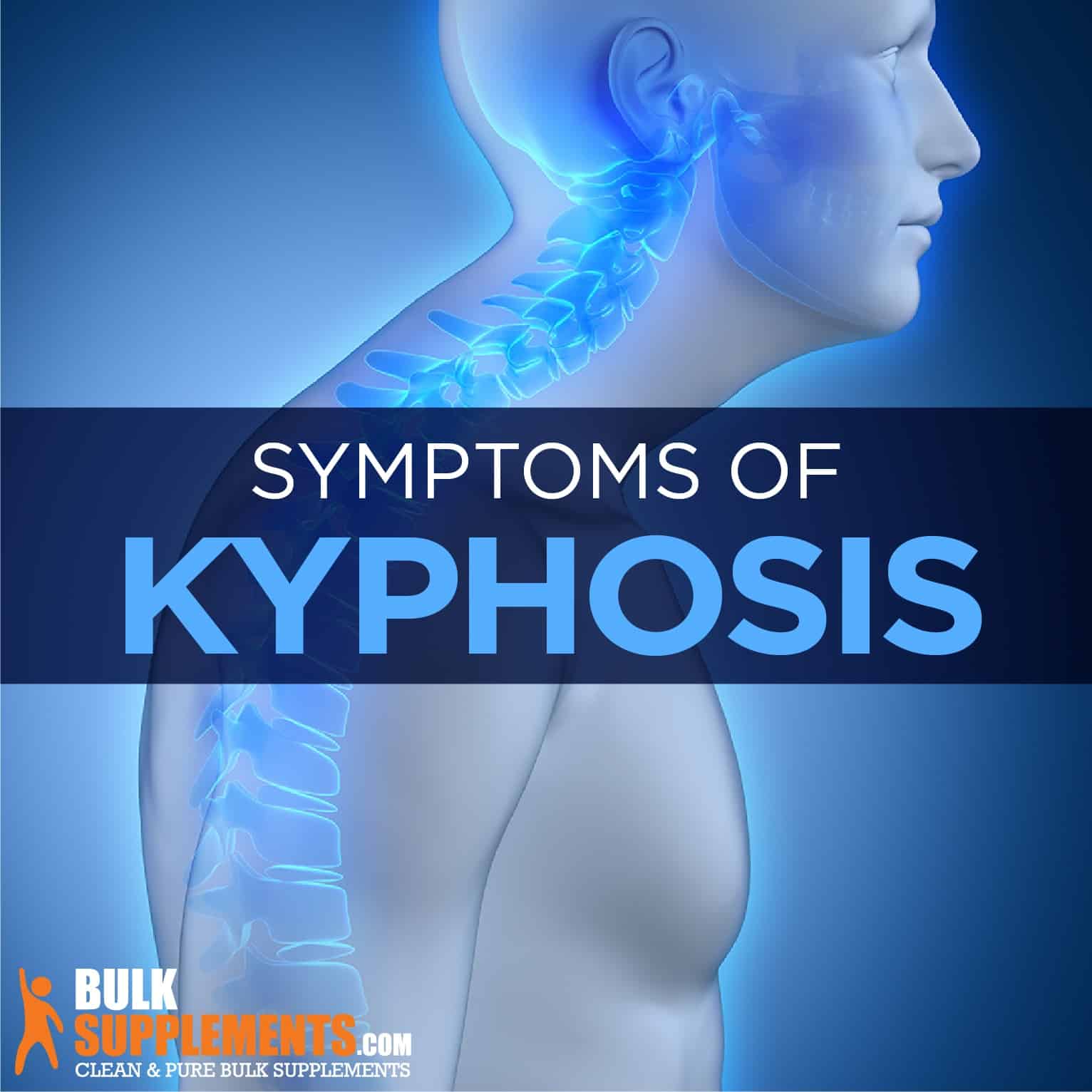 Kyphosis is Greek for ‘hump.’ Some also refer to it as dowager’s hump. Other spine abnormalities include lordosis — an exaggerated curve in the low back or neck (because they both curve in) — and scoliosis — a sideways curve which may be S-shaped or C-shaped. The difference between kyphosis and scoliosis is that scoliosis has a lateral bend; in contrast, kyphosis is a forward curve (greater than 50 degrees) to the spine. However, because spinal deformities often happen in multiple directions, it is possible to have kyphosis and scoliosis at the same time. This dual condition is known as kyphoscoliosis (x).

Bent spine syndrome, or camptocormia, also means that the torso is bent forward, but this is different from kyphosis. Camptocormia appears when standing and gets worse with walking, but it disappears when the person lies down. Kyphosis, on the other hand, stays the same in all positions (x).

A normal kyphotic curve is between 20 and 40 degrees. A thoracic curvature of more than 50 degrees is the definition of kyphosis and the most obvious sign is a hunching back. Shoulders that are different heights are another sign (x). The more the spine curves, the more problems you are likely to experience.

A hump on the back of the neck is another potential sign, but it does not always indicate kyphosis. This hump, sometimes called a buffalo hump, can be due to other conditions including osteoporosis, Cushing’s syndrome, a side effect of medication to treat obesity or long-term steroid use (x, x).

Feeling pain in the spinal area when breathing is sometimes caused by kyphosis, but not always. It can also be due to inflammation, an infection or other, more serious causes such as a heart attack or cancer (x).

Severe kyphosis can limit mobility and cause difficulty breathing. It can also manifest in digestive issues including acid reflux and difficulty swallowing (x). Kyphosis can also make a person feel insecure about self-image due to wearing a back brace, or feel uncomfortable about the shape of one’s body, potentially causing social isolation (x).

Osteoporosis, a possible cause of kyphosis, means the bones are weak and fragile due to mineral loss (x). Kyphosis has a strong genetic component and osteoporosis is often hereditary as well (x, x). An infection such as tuberculosis, polio, endocrine system disorders and tumors can also cause kyphosis (x).

Scheuermann’s disease (or Scheuermann’s kyphosis) is often an inherited disorder that makes parts of the vertebrae grow at different rates. This can cause rounding of the upper back, resulting in pain. The disorder usually happens between the ages of 10 and 15, but because people of that age are still supple, a back brace and exercises can usually be used to relieve the pain; thus, surgery is rarely necessary. Physical therapy is also often used in conjunction with a back brace for Scheuermann’s.

Various conditions and ailments can cause kyphosis. Many of the factors that may cause it include:

Depending on the underlying cause, it may be possible to fix kyphosis. Practicing good posture and exercising the muscles of the back and abdomen can help slow progression if the kyphosis is due to age, degenerating discs, inactivity or poor posture (x). You can also get a brace for the upper back to help improve posture, straighten the spine and get rid of rounded shoulders.

Magnesium is important for bone health and it also reduces inflammation. Many people do not get enough magnesium from their diet alone. Zinc is also needed to maintain bone density. It must be balanced with copper to activate certain enzymes.

Manganese is a trace element that helps increase bone density in post-menopausal women. While there is no recommended daily allowance for manganese, a typical dose runs from 2-9 mg. Note that excessive intake of manganese can cause anemia and interfere with the absorption of other minerals such as calcium, iron, zinc and magnesium.

Creatine helps to build muscle and can be useful to increase strength in those with muscular dystrophy. Dosage may vary. Talk to your doctor about the right dose for your condition.

Boswellia serrata, sometimes known as frankincense, is an herb used in Ayurvedic medicine that has been shown in studies to be effective against arthritis and reduce inflammation (x). A typical dose is around 450 mg once or twice per day.

Curcumin is the active ingredient in the turmeric plant. It has long been used in Ayurvedic and traditional Chinese medicine and has been shown in research to relieve pain, stiffness and inflammation due to arthritis (x). Note that high doses of turmeric can act as a blood thinner and upset the stomach. Do not take curcumin or turmeric if you are taking blood thinners (x).

Fish oil contains omega-3 fatty acids such as DHA and EPA that have been shown in studies to help alleviate joint stiffness and reduce inflammation (x). Because it can be difficult to get a therapeutic amount of DHA and EPA from food alone, a daily dose of fish oil is recommended.

Kyphosis is an abnormal curvature of the spine that may cause pain, a hump in the upper back and, in more severe cases, difficulty breathing and other problems. Exercise, physical therapy and a back brace may help, as can supplements such as zinc, magnesium and curcumin.