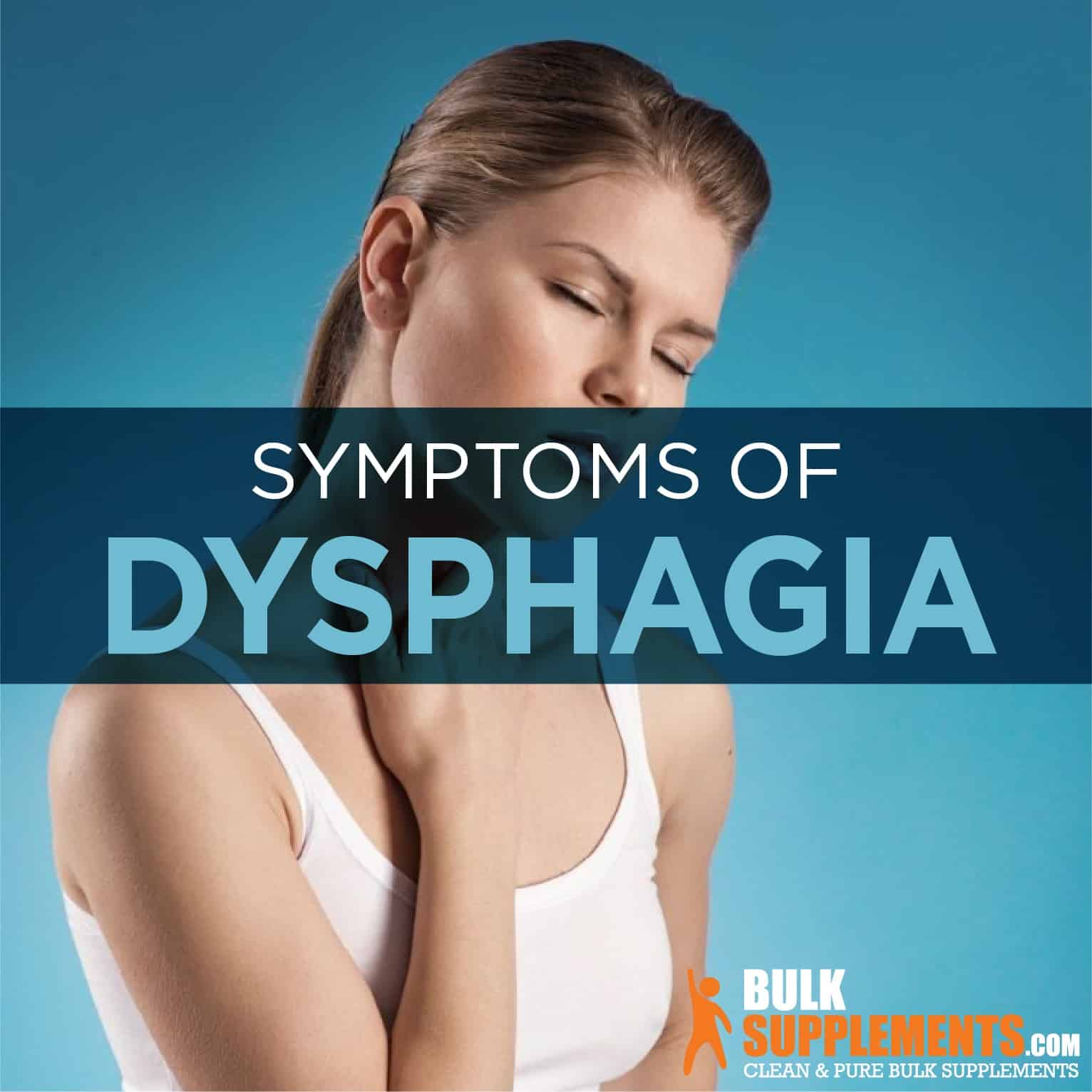 Dysphagia is a medical condition that causes difficulty swallowing. It often feels like a tightness in the throat or the back of the mouth (x). Various other medical conditions, such as gastroesophageal reflux disease (GERD), diffuse spasm, allergies or, in rare cases, tumors, can all cause dysphagia. Foreign objects that get lodged in the throat can also cause the condition.

Dysphagia is a broadly defined condition, and there are a number of different causes and symptoms. Here are some of the most common symptoms to examine:

Dysphagia presents as a tightening in the throat, which can be felt along the esophagus. To many people with the condition, it feels like they have food stuck in their throats. In mild cases, it might resemble a pill lodged in the throat (x).

Although dysphagia can cause throat tightness, it doesn’t usually inflict acute pain. If you notice any sharp pain from swallowing, that sign could indicate something more serious.

Those with dysphagia often have a narrowed esophagus, which makes it harder for them to swallow. This struggle can lead to a buildup of mucus after eating. This mucus can worsen the other symptoms of dysphagia, as it makes the throat feel even tighter.

Due to difficulty swallowing, dysphagia can lead to food getting stuck in the throat. If you have esophageal dysphagia, food boluses stuck in your throat can cause chest pain. This chest pain usually dissipates once the food passes (x).

If you notice severe chest pain that does not stop after food passes through your esophagus, this feeling could be a sign of another health problem. Speak to your doctor, as chest pain could potentially come from damage to the esophagus.

A food impaction is when food cannot pass through your esophagus due to an obstruction. Most food impactions will not block the airway, but they’ll make it impossible to eat until the obstruction passes (x).

Dysphagia can cause food impactions by narrowing the throat, making it more likely that food blocks the esophagus. If you have a food impaction, you can wait a few minutes to see if the obstruction clears on its own, as most do (x). If it does not, then you should seek immediate medical care.

Dysphagia can make it difficult to eat and swallow. This causes many patients to eat less and, in severe cases, not eat at all. Therefore, dysphagia can often lead to weight loss. This weight loss may not be noticeable in some cases, whereas in severe cases it can be quite significant and even promote malnourishment.

If you are having difficulty eating or notice any sharp pain when you swallow, you should speak to your doctor at once since these indicators could foreshadow a more serious underlying medical condition that needs immediate attention.

Diffuse spasm is when the esophagus spasms rapidly, which can cause narrowing of the throat and difficulty swallowing. It can also lead to food getting caught in the throat, as well as chest pain (x).

The cause of diffuse spasm is unknown in many cases. Some cases are caused by allergies and can be treated with acid reflux medications or dietary changes (x).

Gastroesophageal reflux disease (GERD) is one of the most common causes of dysphagia. It’s a condition where the contents of the stomach flow back up the throat. The acidic stomach content can cause pain and burning in the throat, and it often leads to inflammation and narrowing of the esophagus (x).

GERD is often treated with antacids, which can help reduce inflammation and prevent dysphagia. If left untreated, however, GERD can cause severe constriction of the esophagus and make eating difficult.

Foreign bodies are another common cause of dysphagia. These objects get stuck in the throat, blocking the passage of food and water and leading to a feeling of tightening. They can also aggravate the tissue in the esophagus, which can also cause swelling and esophageal stenosis (x).

If the foreign body doesn’t pass on its own, you should seek immediate medical attention. Dysphagia will usually go away after the object is removed, although you may have some swelling for a few days that can cause constriction of the throat.

In rare cases, dysphagia can be caused by tumors that grow at the back of the throat. These tumors press on the esophagus, thus leading to a feeling of constriction (x). This can make it difficult or impossible to swallow.

If left untreated, tumors can cause complete obstruction of the esophagus. If you notice any difficulty swallowing that worsens over time, speak to your doctor immediately.

There are some cases of dysphagia that are caused by neuromuscular diseases. These can affect the nerves that connect to the throat, which further cause difficulty in swallowing.

Neuromuscular diseases usually cause a type of dysphagia that is more common at the back of the mouth than in the esophagus (x). These illnesses lead to difficulty swallowing, as the food does not pass into the esophagus due to a narrowing of the pharynx.

Many cases of dysphagia can be improved by changing position. In patients who suffered from dysphagia after a physical injury, changes in posture were effective at alleviating symptoms. The change in posture also made it much easier for patients to swallow (x).

This treatment won’t correct any structural issues in your esophagus, but it can make it easier to eat and drink as you treat the primary cause of the dysphagia.

The symptoms of dysphagia can sometimes be managed by changes in diet. This modification could involve eating more soft foods, as well as chewing more before swallowing. Drinking more fluids as you eat may also smooth the passage of the food through your esophagus (x).

In some cases, dysphagia comes as a result of acid reflux (x). A change in diet can help reduce reflux and prevent inflammation in the throat.

Changing your diet won’t treat most cases of dysphagia, so it’s important that you speak to your doctor about other treatment options. However, the dietary adjustment can help you manage symptoms until the primary cause of the condition is addressed.

In mild cases of dysphagia, drinking a glass of warm water can help relax the esophagus and make swallowing easier. This action may also help in severe cases, although it won’t significantly reduce inflammation (x).

Melatonin is one of the main molecules to regulate sleep in the human body. However, it also has a role in gastric acid secretion. Patients with GERD and dysphagia were given melatonin to see if it treated acid reflux. Melatonin reduced the symptom severity of all patients, showing that it may have a role in treating dysphagia caused by GERD (x).

Aloe vera is another commonly used supplement that may also have a role in treating dysphagia caused by GERD. Studies have shown that aloe vera is safe and well tolerated for GERD and can reduce inflammation in the esophagus (x). Aloe vera is a fairly mild treatment and may not be enough to treat more severe cases of GERD. If you’re considering taking it and are having issues swallowing food, you should speak to your doctor about all of your treatment options.

In severe cases of dysphagia where the cause of the condition is unknown, your doctor may consider placing a metal stent in your esophagus. This stent keeps your throat open so that food and liquids can pass through without getting caught.

This procedure is usually only performed in cases where the dysphagia is caused by a tumor. But it’s an effective way of keeping the esophagus open if there’s severe constriction.

Dysphagia is a common medical condition that affects millions of people annually. Although mild in most cases, it can make eating and drinking difficult. It can also increase the chances of an airway obstruction or esophageal rupture.

There are a number of different causes of dysphagia, ranging from GERD and foreign bodies to diffuse spasm and neuromuscular diseases. This variation means that treatment options for the condition also largely depend on the cause. Many people with dysphagia benefit from taking supplements such as aloe and melatonin, which can help reduce inflammation caused by acid reflux.

If you’re having trouble eating or breathing, you should speak to your doctor right away. There are a number of treatments for more severe cases of dysphagia.