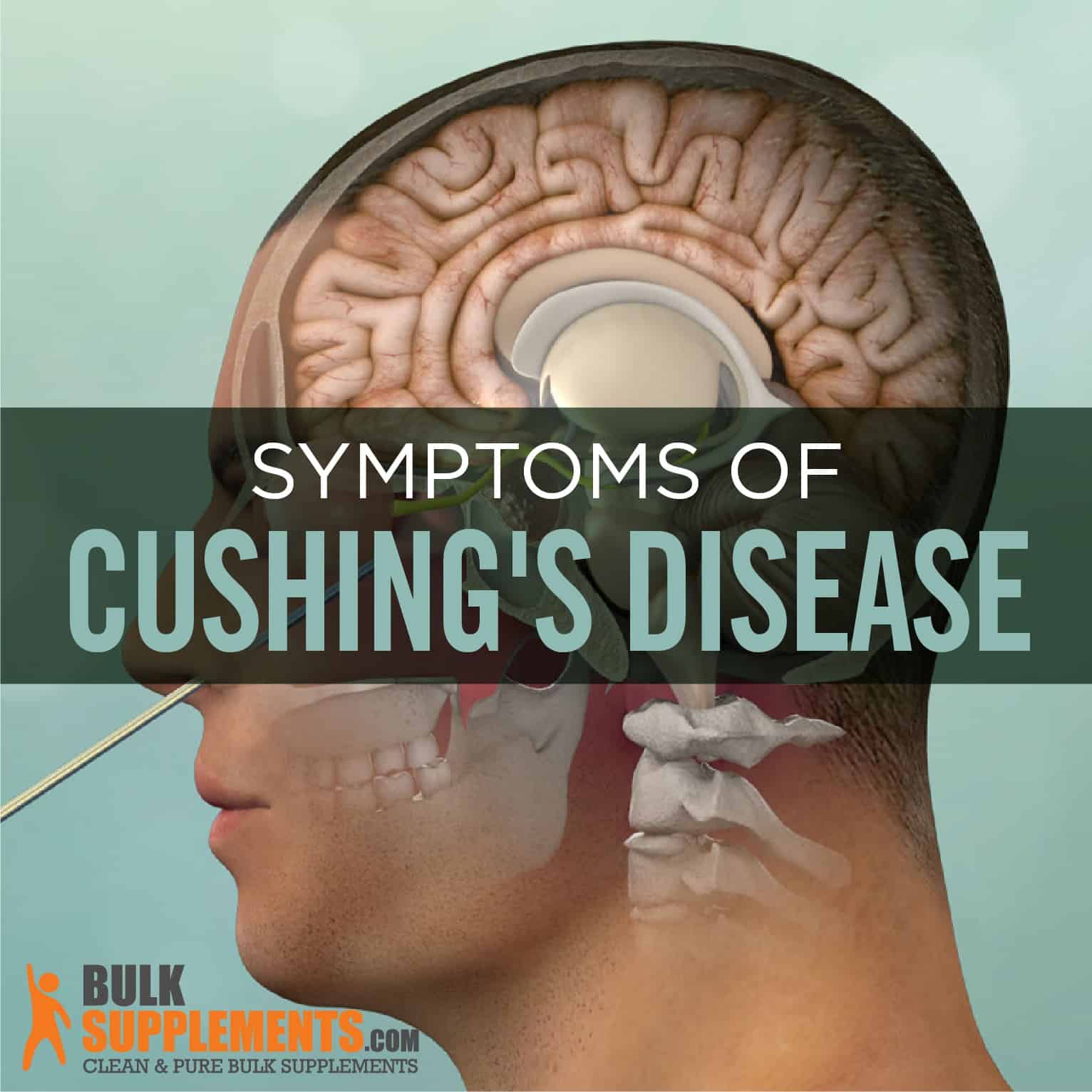 What is Cushing’s Disease?

The pituitary gland is only about the size of a pea, but its size is inverse to its power. Located at the base of the brain, the pituitary is sometimes called the ‘master gland’ because the hormones it secretes control many bodily functions including growth, blood pressure, energy, reproduction, metabolism, body temperature and pain management (x).

One of the hormones the pituitary gland secretes is adrenocorticotropic hormone, or ACTH for short. ACTH in turn tells the adrenal glands to produce the stress hormone cortisol. Under normal circumstances, the body only releases cortisol during certain times of the day or in stressful situations. Cortisol tells the body how to use macronutrients (fats, proteins and carbohydrates) to deal with the stress, and it also suppresses inflammation so the body can respond. We call this the “fight or flight” response. However, when too much cortisol is released, it throws the whole system out of whack. It results in Cushing’s disease or Cushing’s syndrome, named after Doctor Harvey Cushing who first described the disorder (x).

Cushing’s disease is relatively rare, and affects only about 10 to 15 people out of one million each year. Most are adults between the ages of 20 and 50. Women are more likely than men to develop Cushing’s disease and make up about 70 percent of the affected population (x).

Cortisol has a profound effect on the whole body. The symptoms of Cushing’s disease are many and shared with other diseases, sometimes making diagnosis difficult.

Signs of Cushing’s on the skin include purple or pink stretch marks, especially on the stomach, breasts, arms and thighs. Skin might be thin and fragile and bruise easily. Acne and slow healing of minor wounds can also occur.

It also affects metabolism. As a result, Cushing’s tends to cause weight gain. Those with the syndrome may also have a round face (“moon face”) and an accumulation of fat on the upper back between the shoulder blades (“buffalo hump”) (x).

Symptoms specific to women include extra facial and body hair and irregular or absent periods (x). Men may experience erectile dysfunction (ED), and a decrease in fertility and libido (x). Children can suffer from delayed growth (x).

Addison’s disease is another disorder of the adrenal glands and is often confused with Cushing’s disease. The difference is that in the case of Addison’s, the body produces too little cortisol. With Addison’s disease, a person is likely to lose weight and have low blood pressure. In contrast, someone with Cushing’s is more likely to gain weight and have high blood pressure. The one characteristic the two have in common is hair loss (x, x).

Cushing’s triad is not related to Cushing’s disease; it is simply named after the same doctor, Harvey Cushing. Cushing’s triad is the name given to the combination of symptoms that point to a dangerous condition called “Increased Intracranial Pressure” or ICP. The three signs of ICP are high blood pressure (hypertension), a slow heart rate (bradycardia; usually under 60 beats per minute) and irregular breathing (x). ICP is usually due to a brain tumor or head trauma; professional medical treatment is almost always required (x).

Dogs are probably the oldest domesticated animal, and we have a lot in common, from unique personalities to an affinity to lounging on the couch. Unfortunately, dogs can develop Cushing’s just like humans and it’s due to the same cause — too much cortisol in the body.

Sometimes the condition results from taking steroids, but it most commonly occurs due to dysfunction of the pituitary gland. If the problem is due to a tumor on the gland that continues to grow, neurological problems may develop. Behavioral changes such as head pressing, circling or seizures are possible (x).

Because cortisol also suppresses the immune system, the dog will be more prone to infection. Excess cortisol also puts the dog at risk for high blood pressure, increasing its risk of stroke (x).

The average life expectancy of a dog with Cushing’s is about 3 years, with younger dogs usually living longer than older ones. The way it presents in each animal will vary, but it’s common for dogs with Cushing’s disease to eventually succumb to seizures and anorexia (refusing to eat) (x).

Remedies and Supplements for Cushing’s Disease

The treatment for Cushing’s disease is usually surgery to remove the tumor from the pituitary gland. While recovering from surgery, cortisol replacement therapy may be necessary for a certain amount of time until the pituitary gland starts to function again. If it is not possible to remove the tumor, sometimes doctors use radiation therapy. If neither of these treatments are successful, they may remove the adrenal glands to stop the production of cortisol. This may sound extreme but left untreated, Cushing’s disease will lead to severe illness and even death (x). But your doctor will prescribe a hormone replacement and living without adrenal glands is absolutely doable.

In the case of Cushing’s syndrome, the usual treatment is to reduce or stop taking steroids, or change to a different treatment (x). Note: Never stop taking medication without talking to your doctor first.

Steroids suppress inflammation, but they come with a laundry list of side effects, such as insomnia, weight gain, headaches, acne and nausea. As a result, many people look for natural anti-inflammatories that can replace steroids. Making dietary changes such as reducing or eliminating sugar and processed foods can go a long way to reducing inflammation in the body. Adding natural anti-inflammatory supplements like turmeric, ginger, garlic, green tea and oregano can also help (x).

Other natural ways to support the management and the wide variety of symptoms of Cushing’s syndrome include astralagus, ginseng, licorice root, holy basil, shiitake mushrooms, rhodiola and milk thistle.

Too much cortisol suppresses the body’s immune system. Astralagus is an adaptogen that helps promote adrenal balance, strengthening the immune system. It may also help to regulate blood sugar levels and blood pressure (x). A common daily dose is 1,300 mg.

The adaptogenic herb ginseng allows the body to more appropriately respond to stress, counteracting the negative effects of elevated cortisol (x). A typical dose equals about 1,000 mg once or twice daily. Because ginseng may cause blood sugar levels to drop, those with diabetes should exercise caution. Ginseng may also interact with other medications. Talk to your doctor before incorporating this or any other supplement into your health regimen.

Licorice root is an ancient remedy for a variety of illnesses. Studies show it can help with adrenal disorders. It may also protect against DNA damage and offer anti-cancer protection (x). Dosing varies, with a maximum recommendation of 600 mg per day.

Holy basil (tulsi) has a long history of therapeutic benefits. It is an anti-stressor or adaptogen, and it also promotes wellness throughout the body (x). Holy basil could help to balance hormone levels and control blood sugar levels. It can also offer headache relief (x). A common dose is 500 mg taken once or twice daily.

Rhodiola Rosea root can help re-balance cortisol levels, decreasing the body’s stress response, as well as enhance immune function (x). The dosage may vary depending on the potency of the supplement (x). Speak to your doctor or pharmacist to help determine the best dose.

Milk thistle contains silibinin and has been shown in studies to help treat Cushing’s disease. It is being studied for its potential as a non-invasive alternative to surgery for pituitary tumors (x). Take 250 mg daily.

Alfalfa promotes pituitary gland function and has been used in traditional Chinese medicine for thousands of years. It can help alleviate some of the symptoms of Cushing’s such as fatigue and muscle and joint pain (x). A common daily dose is about 5 grams.

Cushing’s disease is a disorder of the adrenal glands, which has far-reaching symptoms from immune suppression to weight gain, to high blood pressure and diabetes. Left untreated, it causes severe illness and even death. Supplements such as astralagus, licorice root and milk thistle can help support better immune function and improve mood, among other symptoms.