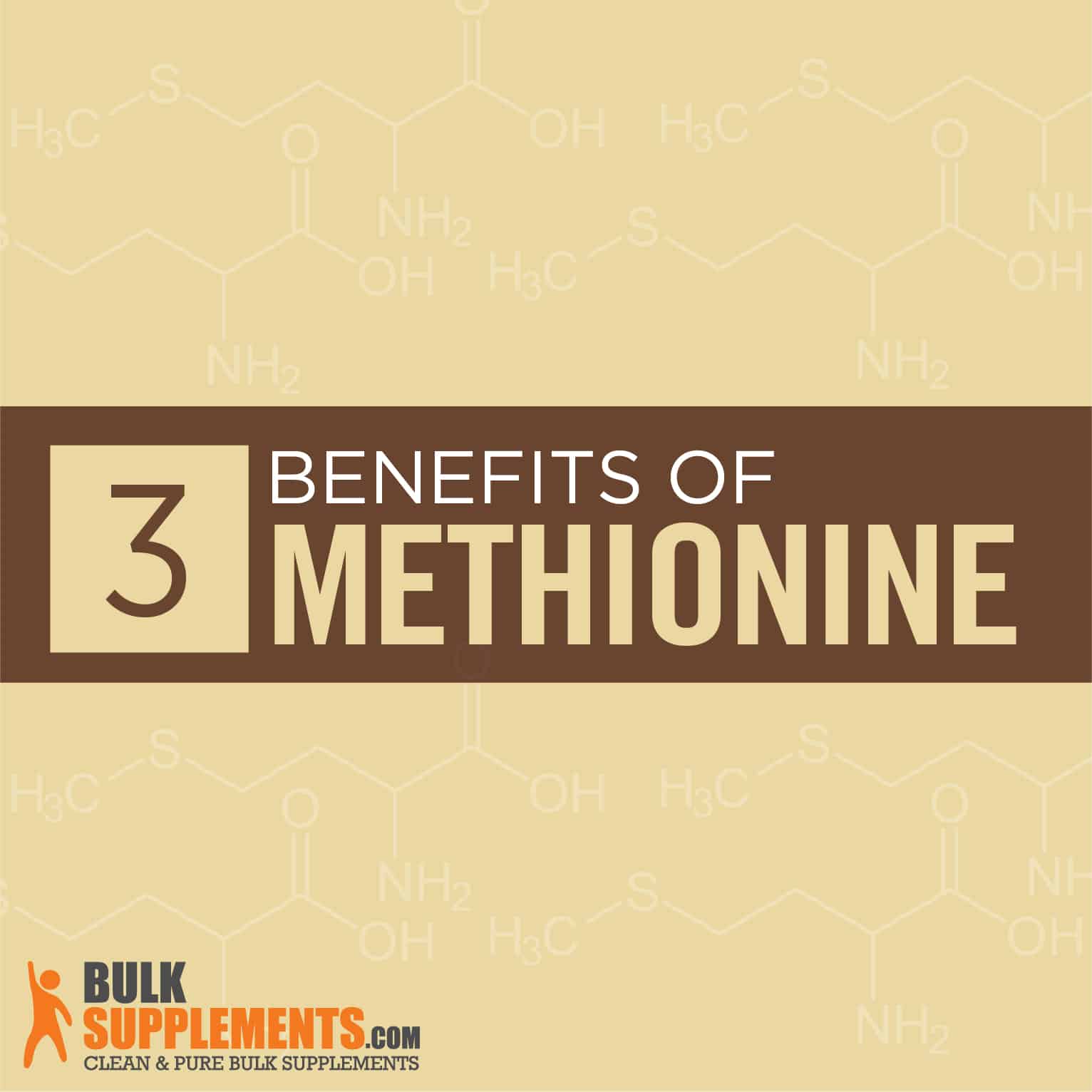 Amino acids play an important role in the way our body properly functions by helping build the proteins that make up our body’s tissues and organs. Methionine is a unique amino acid that produces other molecules that are critical for your body’s cells to function correctly (x). Along with being a building block for proteins, methionine also has the ability to convert into important sulfur-containing molecules. These molecules can protect your tissues, maintain proper cell function and even modify your DNA.

L-methionine is a form of methionine that can prevent disorders of the hair, skin and nails (x). It promotes hair growth, helps reduce liver fat and protects the kidneys as well. It has been linked to the following benefits; however, more research is necessary to back up these claims.

This form of methionine also goes by the name of racemethionine. Believe it or not, it can improve the nutritional value of animal feeds and pet foods (x). At times, there may be a need to add supplemental methionine to an animal’s diet that contains minimal meat proteins. Some animal feeds and pet foods contain heavy amounts of vegetable proteins like soy, and methionine is much higher in meat proteins than in plant proteins. DL-methionine can be used outside of food for pets as well. It can help treat and prevent bladder stones in cats and dogs. However, make sure to check with your veterinarian before using DL-methionine with your pets (x).

Helping the Normal Functions of Cells

Methionine is a critical amino acid. One of its major roles in the body is that it can produce other important molecules, including cysteine. After being produced by methionine, cysteine can create a variety of molecules including proteins, glutathione and taurine (x). This is very important and matters for your health because glutathione is critical to your body’s defense mechanisms and has been called the “master antioxidant.”

Considered to be the most important molecule yet that methionine can be converted into is S-adenosylmethionine or “SAM” (x). SAM is used in the production of creatine, a molecule very important for cellular energy. It also participates in a number of different chemical reactions by transferring part of itself into other molecules such as DNA and proteins. Essentially, SAM can change your DNA by adding a methyl group to it. This process can be altered by the amount of methionine in your diet.

One of the main concerns that researchers face is the fact that methionine can be converted into homocysteine, which is an amino acid associated with heart disease (x). When a person has a high intake of methionine, it may lead to an increase of homocysteine.

One test has been performed over 6,000 times to evaluate the body’s response to methionine. During this test, a single large dose is given that is often around 45 mg/lb. Throughout the number of times this test has been performed, there were primarily only minor side effects reported including dizziness, sleepiness and changes in blood pressure (x).

Methionine is not toxic in healthy humans unless taken at extremely high doses. It should not be used in patients with acidosis and should be used with extreme caution in patients with severe liver disease.

The recommended daily intake of methionine plus cysteine is 8.6 mg/lb per day for adults (x). According to the World Health Organization, the optimal daily dose of L-methionine is about 13 milligrams per kilogram of body weight (x). However, the recommended dosage is dependent on each individual and their health history. Always make sure to consult your doctor before adding any supplement to your daily nutrition routine.

Related to acetaminophen poisoning, the dose that has been studied is 2.5 mg every four hours for a total of four doses. For it to be an effective treatment, though, take it within the first 10 hours of poisoning onset.

While researchers have set a daily recommended dose for methionine, some studies have explored the side effects of taking higher doses. Ironically, though, some studies have shown that a low-methionine diet may actually starve cancer cells. Dosage and side effects will vary by person. This is why it’s always important to discuss with your physician before adding any supplement to your diet.

A number of amino acids can make proteins in the body. However, the only amino acids capable of doing so that also contain sulfur are methionine and cysteine. But interestingly enough, methionine must come from your diet while cysteine can be produced by your body. Add these foods to your diet to get your recommended intake:

Methionine is a unique amino acid that is important to the function of cells in our body because of its ability to produce other important molecules. The only way to get methionine is through your diet, whereas other amino acids can be produced by the body itself. It contains sulfur, but also can produce other sulfur-containing molecules and helps produce protein in your cells. It can be found in a number of foods containing protein, but is often higher in animal proteins than it is in plant proteins. Not only does it produce molecules critical for normal cell function, but it also plays a role in DNA methylation and may increase the lifespan of animals. However, it may have a harmful effect on your health if taken in higher doses than recommended.

Based on your own health and the lack of sufficient research available, you can probably get your healthy dose of methionine by continuing to add healthy proteins and vegetables to your daily intake.