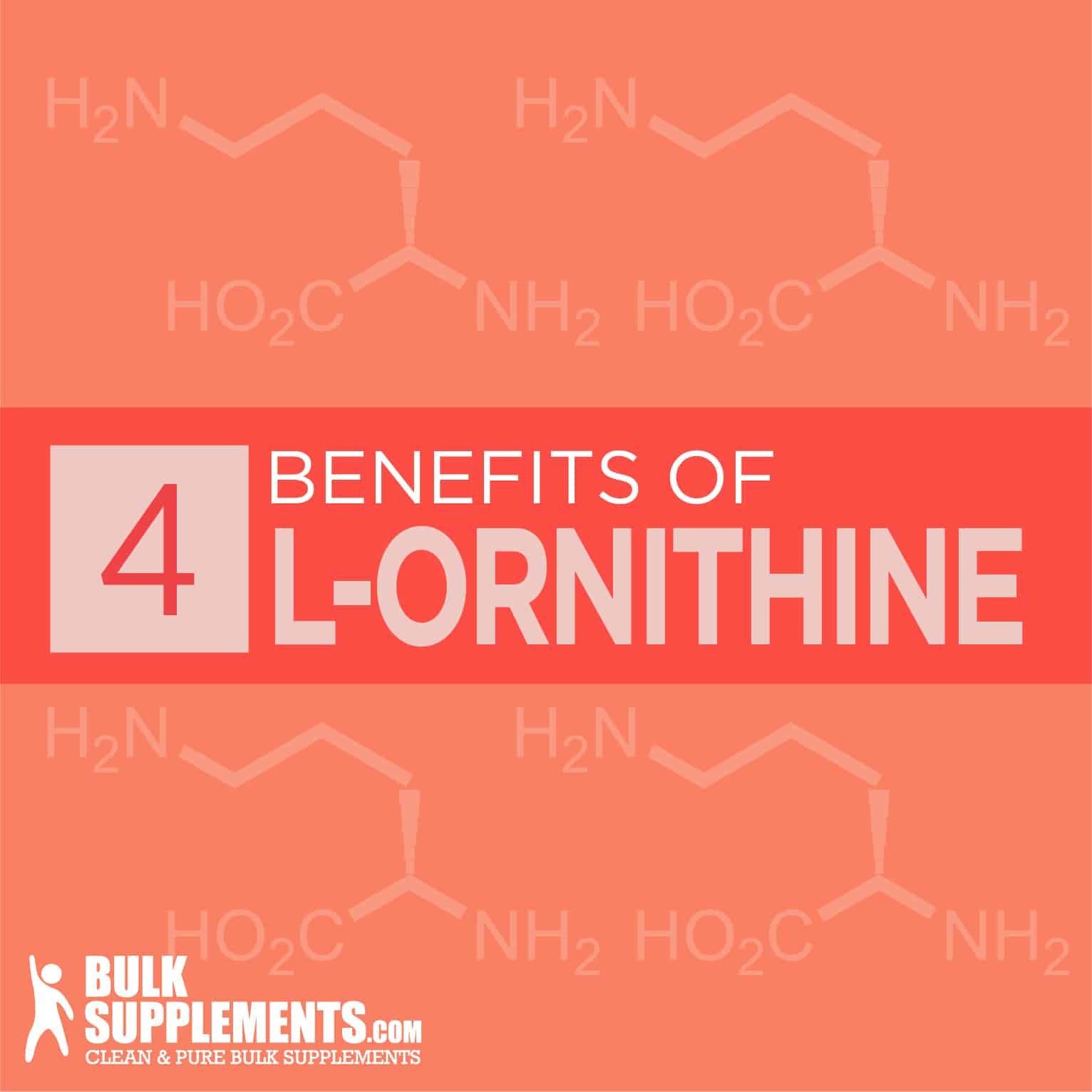 L-ornithine, commonly known as ornithine with an L-configuration, is an amino acid that helps remove bodily wastes and fatigue-causing metabolites in the muscles. Many consider L-ornithine one of the more potent rejuvenators of all the amino acids. If you play competitive sports, body build or work out extensively, you need to find out about L-ornithine. Before starting any new supplement, discuss with your physician if it can help your body and well-being.

To boost the body’s natural L-ornithine levels, you can purposefully consume more of it in your diet, or you can supplement your body.

Ornithine’s highest concentrations exist in connective tissues, such as the skin. But this amino acid’s journey starts elsewhere — in the liver. It generates with the help of an amino acid called arginine. Unlike its amino-acid counterparts, it’s a “nonprotein amino acid,” which means it doesn’t contribute to protein formation as other amino acids do.  Over 900 nonprotein amino acids come from a wide variety of plants. (x)

How Does L-Ornithine Work?

L-ornithine engages in the biochemical process called the urea cycle. (x) Your body uses the urea cycle to remove excess nitrogen-containing compounds such as ammonia. Amino acids are the most significant bodily nitrogen source, which the body needs to function correctly and efficiently. However, nitrogen-containing compounds create ammonia as they break down. Ammonia becomes toxic if it remains in the body, so it needs a process to remove it. Ornithine is a critical part of the urea cycle as a complete process of breaking down the toxins.

During this cyclical process, ornithine works with arginine to break down ammonia into urea, which the body then passes in the urine. (x) The body can’t get rid of these toxins unless this cycle occurs. Hence, the reason ornithine is imperative to your body’s health.

Because ornithine is a nonessential amino acid, the body creates enough of it on its own. Sometimes your body cannot produce enough, such as when injured, work outing or overexerting yourself. Luckily, certain foods are rich in the amino acids your body needs to generate sufficient amounts.

Ornithine doesn’t have as many benefits as its amino acid counterparts have. However, it still has positive effects on your body’s overall health. Some of these include:

One study, published in the journal Nutrition Research, showed that L-ornithine had an anti-fatigue effect on exercising with 17 healthy volunteers. (x) The study’s results suggested that ornithine enhanced energy consumption by promoting lipid metabolism, activating the urea cycle, and helping the volunteers get rid of bodily ammonia. Ultimately, this lowered their physical fatigue.

Another scientific study took 52 relatively healthy Japanese adults who felt slightly stressed and fatigued on the job. They took 400 mg of L-ornithine for eight weeks to relieve stress and fatigue symptoms related to sleep. The group reported less anger, and the quality of sleep-related to exhaustion had improved. (x)

A study published in the Journal of Surgical Research showed that supplemental ornithine sped up wound healing in scientific research conducted on mice. (x) Researchers fed the mice a diet of their regular food and ornithine-supplemented water. They put incisions in their skin and tested the mice’s healing wounds after 14 days to examine “wound-breaking strength” (the force needed to open a healing wound) and “collagen deposition” (a stage of wound healing). The wounds of mice given ornithine healed faster than those fed a regular diet during the study.

Ornithine can also come as L-ornithine A-ketoglutarate (OKG), which was part of a study of administering it to 54 burn patients, with a total burn area of 20 to 50 percent. The supplemental dose was extensive as an infusion. The result was positive, where wound healing was noticeably shorter. (x)

Another scientific study on 60 patients underwent severe burns at 20 to 60% of their body surface. Assessing the quality of healing showed OKG improved the nutritional factors during the treatment, allowing better recovery. (x)

Ornithine and arginine help the body make creatine. (x) Creatine works by pulling water into the muscle cells and increasing protein synthesis. In highly athletic individuals, the body converts creatine into a phosphocreatine, which synthesizes during those high-intensity exercises and gives the body a quick surge of energy for short-term, high-intensity movements. (x)

A scientific study conducted on middle-aged rats underwent for six weeks moderate intensity endurance training without the supplement showed no increase in capillary growth. Whereas, rats trained with L-ornithine and L-arginine at the same endurance showed an increase in capillary growth. Furthermore, researchers speculated that the supplementation may help intervene ischemic-related diseases. (x) Ischemic means a reduction of blood supply caused by plaque build up in the arteries such as coronary heart disease. (x)

Ammonia is a waste product made of nitrogen, and too much nitrogen can be incredibly toxic to one’s system. In the urea cycle, ornithine steps in to convert ammonia into urea, which the body passes in the urine. Ornithine helps keep the liver clean and free from toxic levels of nitrogen. (x)

Some studies have shown that individuals suffering from liver diseases such as hepatic encephalopathy, a nervous system disorder because of chronic or severe liver disease. Those with liver disease may benefit from taking ornithine-based compounds, such as L-ornithine L-aspartate, from combating excess ammonia. (x) A scientific study followed patients who had liver disease and took the supplements — L-ornithine L-aspartate. They showed an improvement compared to those who took the placebo. Notably, their mental state improved. This study also concluded that the supplements are safe and effective for those with chronic, stable hepatic encephalopathy and cirrhosis. Cirrhosis stems from chronic alcoholism or hepatitis. (x)

Ornithine deficiency is possible, though rare. Those who suffer from it don’t have the means in their body to remove toxic nitrogen from the body. This waste can build up and spread throughout the body, causing other systemic issues — mainly liver breakdown or failure. (x)

As mentioned before, ornithine in supplemental form is L-ornithine hydrochloride. In this form, you can add it to liquids or blends of other vitamins. Its recommended daily dose is 1.5 grams up to three times daily. It’s best to start with a small amount before slowly increasing it.

As mentioned earlier, ornithine can also come as L-ornithine A-ketoglutarate. It is a salt made from two different molecules of L-ornithine and dicarboxylic acid. This form’s recommended dose is 1 to 2 milligrams once daily.

Where to Buy L-Ornithine?

Because the body already produces ornithine naturally, there’s little need to worry about side effects. However, that does not mean that side effects cannot occur. More research is necessary to determine any potential side effects related to ornithine. Be sure to talk to your doctor before taking supplements or upping your supplemental dose.

L-ornithine is a unique non protein amino acid your body makes naturally, and it’s vital for removing toxins from the liver as part of the urea cycle.

L-ornithine doesn’t have nearly as many benefits as its amino acid equivalents have. However, it still has positive effects on your body’s overall health. Such benefits include helping wound healing, liver function, endurance and cardiovascular function.

The supplement has no reported side effects since your body naturally produces the amino acid with the help of other amino acids in the body. But if you want to make sure you get enough L-ornithine, protein foods such as meat, dairy, nuts, fish and soybeans.

L-ornithine is vital to overall health. But before supplementing it or upping your daily dose, talk to your doctor.