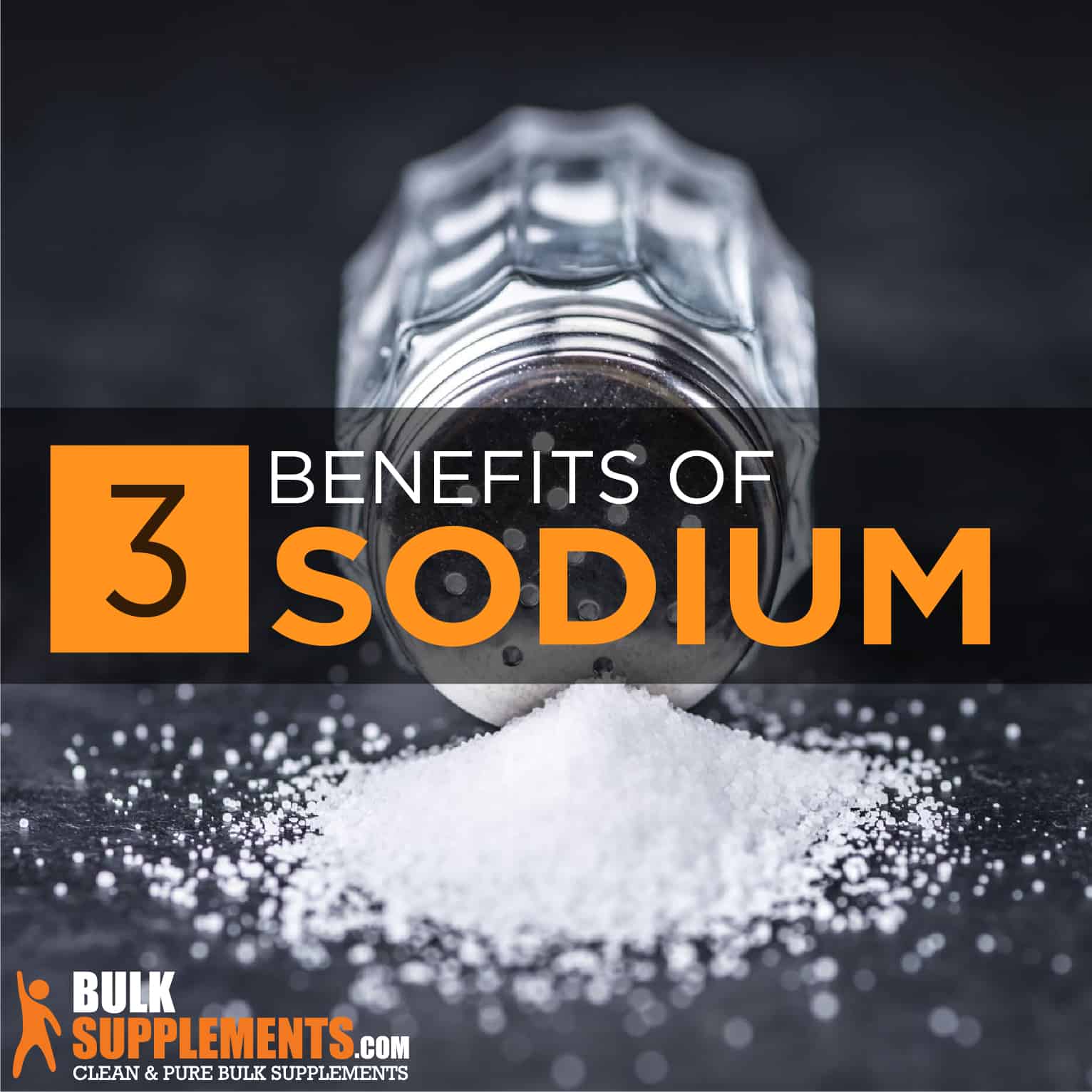 Sodium is a naturally occurring chemical element. You’ve probably seen it on many charts and references with the Latin abbreviation Na — it is atomic number 11 on the periodic table. Table salt (sodium chloride) is it’s most common household form, but there are many other naturally occurring forms of it that we use for many different things. It can work wonders for the body. In fact, it’s essential for keeping it healthy and functioning.

Sodium helps the muscles and nerves function. It also regulates bodily fluids and helps maintain healthy circulatory systems. To maintain a healthy balance in the body, you need to ingest between 1,500 and 2,000 milligrams of it every day. However, those numbers vary depending on the form of it you’re ingesting.

Sodium ascorbate is another common form of sodium. It’s an antioxidant, and, in addition, it promotes cardiovascular health and helps maintain healthy eyes. Sodium citrate is another. It can flavor food and balance pH levels in the body.

Let’s discuss the various forms of sodium, and what their health benefits are. Though they’re similar, each has its own uses. You can take these as daily supplements to promote your health (x).

Sodium ascorbate is another term for vitamin C (x). It occurs naturally in fruits and vegetables, and the body uses it to help build connective tissues and healthy bones. Taken as a powder, it introduces powerful health-promoting effects to the body. Many take it for its antioxidant effects — it helps the body remove free radicals, preventing cellular damage.

Some evidence exists to suggest that taking sodium ascorbate daily can also slow the signs of aging. It may prevent the development of wrinkles, keeping skin healthy, elastic and overall looking youthful (x).

What is sodium citrate? It is a naturally occurring salt found in citric acid. As the sodium salt of citric acid, it has many applications. It can preserve and flavor food (you can taste it in your favorite citrus-flavored drinks) and has uses as an emulsifier (x).

Aspartic acid, also known as sodium aspartate, is a derivative of sodium that also provides some notable health benefits. It helps the body produce plasma electrolytes, which assist in athletic endurance and energy levels (x). In supplemental form, it also reduces fatigue (x).

Sodium aspartate occurs naturally in animals and plants, and its most common natural source is cane sugar and sugar beets (x). It supports endurance for better athletic performance, so if you take it as a supplement daily, you can expect to feel that extra push during your workouts.

In addition, evidence from animal studies exists to support sodium aspartate’s efficacy for enhancing memory and cognition (x). Other studies have shown that it behaves as a neurotransmitter. This might explain how it heightens brain functioning. In higher doses, around 3,000 milligrams, it performs at its most effective level.

One of sodium’s major roles is to maintain the balance of bodily fluids. To keep a healthy level of constant hydration, sodium is crucial. Research has shown that dehydrated study participants rehydrate with it more efficiently than those who don’t (x).

It is also crucial for sending and receiving nerve impulses, for which sodium ions, in particular, are responsible. They are the vehicle for all movement and feeling in the body. Maintaining a healthy intake is vital to this function. In fact, local anesthetics block nerves on the molecular level by inhibiting its ions (x). This means ions constantly maintain nerve responses and bodily sensations. Deficiencies can slow nerve response time, inhibiting body movement.

Sodium is imperative for maintaining healthy blood pressure (x). It works with potassium to regulate arterial pressure, and deficiencies may be cause for alarm. Studies have shown that an increased level of plasma renin activity takes place when levels deplete. The plasma enzyme renin is responsible not only for monitoring blood pressure, but also for regulating thirst and the accumulation of urine, which removes waste from the body. By making sure we get enough in our diets, we can maintain healthy bodily fluid levels.

Sodium chloride (table salt) carries with it most of sodium’s negative side effects. Consuming too much of it can cause some rather alarming health issues.

Table salt is one of the leading causes of high blood pressure. A recent study determined that up to 17 percent of hypertension cases in the U.S. were due to high intakes of sodium chloride (x). Consuming too much table salt is worse for you than not exercising.

Consumed in excess, sodium chloride raises arterial pressure (x). Also, too much salt in the body forces itself to hold water to dilute it, thereby increasing water retention and the volume of blood moving through the bloodstream. In turn, the increase in blood volume raises blood pressure, causing hypertension. Over time, hypertension can harden blood vessels. And if left untreated, these hardened blood vessels can lead to heart attack and stroke. What’s more, because the heart is working overtime to pump an increased volume of blood, it can weaken, having severe long-term effects on itself.

Table salt can also wreak havoc on the stomach. In fact, studies have shown that too much salt may cause stomach cancer, the fourth most common cancer in the world (x). The risk of stomach cancer is especially high in developing countries, where the excess consumption of sodium chloride is common. Additionally, the overconsumption of table salt can cause a gamut of other gastric upsets.

Each dietary supplement has its own dose guideline, as follows:

A great source of vitamin C, promoting heart, bone and skin health. Take 2,100 milligrams (one level 1/2 teaspoon) of sodium ascorbate powder once daily, or as directed by a doctor.

Ideal for improving athletic performance and cognitive function. Take 3,000 milligrams of sodium D-aspartate powder daily (one scant teaspoon) or as directed by a doctor.

A great flavor enhancer, preservative and emulsifier that reduces food acidity. Take 3,000 milligrams of sodium citrate powder daily (one scant teaspoon), as directed by a doctor or to taste.

Sodium, in its many forms, carries a gamut of health benefits. From bodily fluid regulation to cognition enhancement, sodium as a supplement may benefit you, though you should try to limit your intake of table salt as much as possible. Take your time to read up on what each supplement has to offer you.

As you should before starting most supplemental regimens, speak to your doctor to see whether sodium supplements are right for you. And if you have a preexisting medical condition, make sure you bring it up with your doctor. Consider taking a supplement today to start reaping the benefits these natural marvels can provide you.