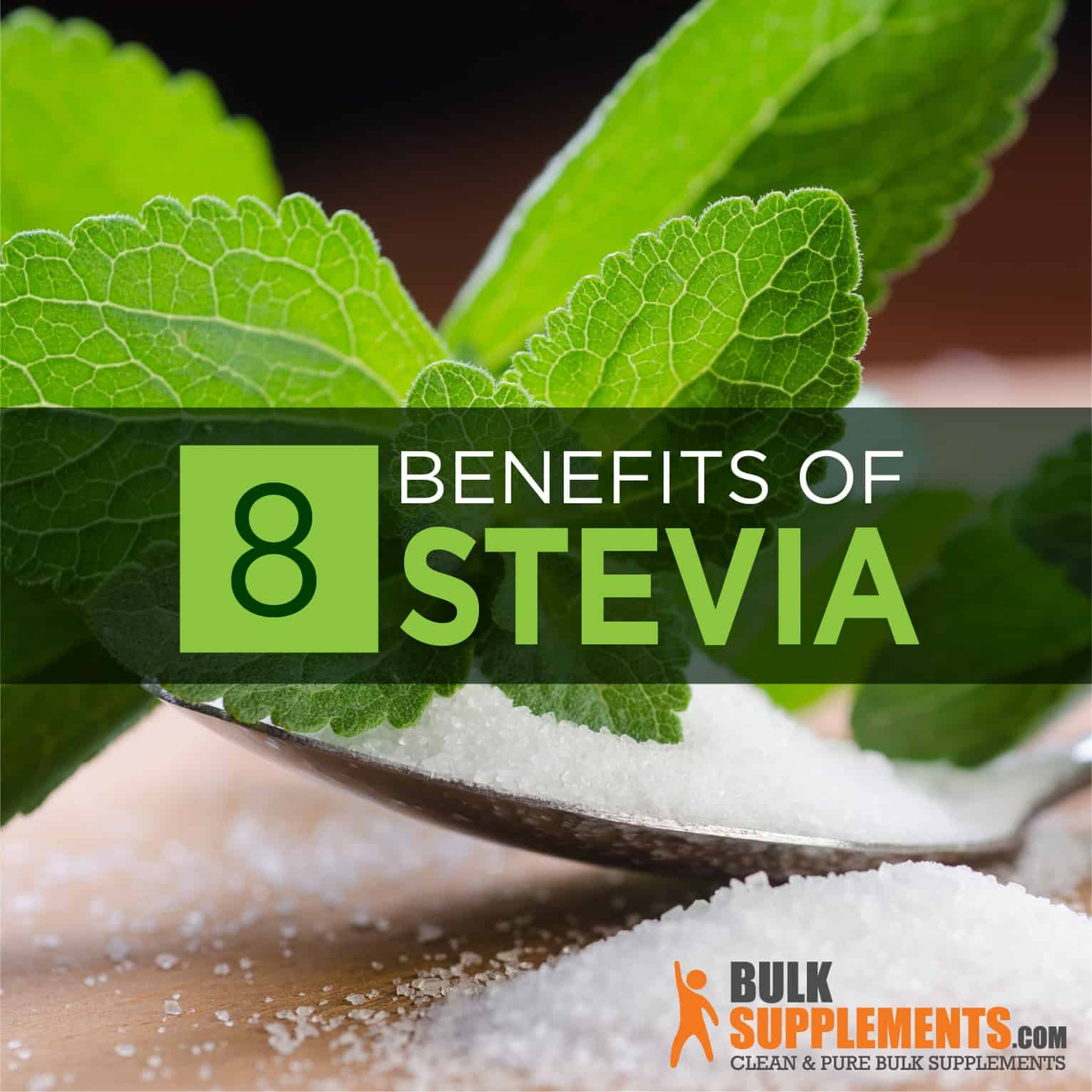 Are you looking for a natural alternative to sugar that may actually improve your health? Stevia can help you lose weight, lower your blood pressure, prevent certain cancers, control diabetes, protect your teeth and skin and even make your bones stronger.

The world has long been searching for a safe alternative to sugar. Stevia is turning out to be a healthful alternative for those who need to watch their sugar intake — that is to say, all of us.

Although stevia is a relative newcomer to the American diet, many have used its leaves for centuries as a sweetener. People from Japan, Brazil and Paraguay have used it as a food sweetener and medicine for some time. In fact, stevia makes up about 40 percent of sugar replacements in Japan. Stevia received the “generally recognized as safe” label from the U.S. Food and Drug Administration (FDA) in 2008 and got the stamp of approval from the European Union in 2011.

The reason for its recent rise to fame in the health sphere is that it’s hundreds of times sweeter than table sugar but does not elevate blood sugar levels. It also doesn’t produce many of the negative effects on the body that sugar does. This makes it particularly helpful to those with type 2 diabetes (x).

Stevia is part of the Asteraceae family — the same family sunflowers belong to. It has many names, including “sweet leaf” and “sugar leaf,” but its scientific name is Stevia rebaudiana. Stevia is native to the tropical areas of North and South America and grown as a crop in Central America, China, Thailand and Israel. The compounds responsible for its sweetness are stevioside and rebaudioside (x).

You only need a small amount of stevia to sweeten food and drinks, making it a zero-calorie food. The reason why stevia can sweeten without affecting blood sugar levels is that the human body does not metabolize stevia. Standard sugar consists primarily of sucrose. Stevia sweetens in a way similar to sucrose, but because it contains a noncarbohydrate compound, it passes through the digestive tract rather than into the bloodstream. This also makes stevia suitable for the keto (low-carb) diet.

Because stevia adds sweetness without sugar’s calories or side effects, health-care practitioners sometimes use it to treat hyperglycemia (high blood sugar) and hypertension (high blood pressure). It can promote weight loss and some use it as a diuretic. Stevia also has anti-inflammatory and antidiarrheal properties (x).

The statistics on diabetes aren’t encouraging. One in ten Americans has diabetes, with another 1.5 million new cases diagnosed each year. Another 85 million Americans have prediabetes. Diabetes is a factor in hundreds of thousands of deaths each year, and the disease’s cost, between lost productivity and direct medical expenses, runs in the hundreds of billions (x).

The average American consumes three pounds of sugar each week and a whopping 150 pounds per year. The American Heart Association recommends eating no more than 10 teaspoons (50 grams) of added sugar per day, but the average adult eats 22 teaspoons and the average child gulps down 32 teaspoons.

Excessive sugar consumption is directly related to diabetes and many other deadly diseases including cancer. What’s more, it causes conditions that lower the quality of life, such as headaches, fatigue, depression and mood swings. Since stevia makes an excellent sugar replacement because it stays out of the bloodstream, it’s a real boon for individuals with diabetes (x).

Stevia contains compounds that act as diuretics, increasing urination, facilitating the excretion of excess sodium and relaxing the blood vessels (x). This results in less stress on the cardiovascular system and lower blood pressure, which protects the heart and reduces the chances of arteries hardening, as well as serious illnesses such as stroke and heart attack.

Everyone knows that sugar is bad for the teeth and gums. But tooth decay is a lot more common than most people think. In fact, 90 percent of people over 40 have some form of tooth decay. It’s painful and expensive to treat, but it’s preventable (x).

Tooth decay is the result of an infection that acid-producing bacteria cause. These bacteria happen to love sugar. By reducing sugar in our diets, we can reduce the risk of tooth decay and other dental problems (x).

Gingivitis is a condition that inflames the gums. High levels of inflammation may cause cancer. Stevia does more than protect your teeth and gums from cavities and gingivitis, though. Studies have shown that it reduces plaque formation on teeth, which is why it’s a common ingredient in toothpaste and mouthwash (x).

About 600,000 Americans die each year from cancer — 1,500 per day. While some cancers are hereditary, lifestyle choices, including diet, cause most. And several controllable factors, such as obesity, increase the risk of cancer (x).

Sugar suppresses an important immune function known as phagocytosis, which the body uses to recycle damaged cells (x). Studies show that eating just a moderate amount of sugar can suppress immune function for up to five hours. Many of us snack on and sip sweets, suppressing our immune systems for most hours of the day.

While cancer cells do feed on glucose (sugar), the real risk from eating too much sugar is excess body fat (x). By keeping your weight under control, you reduce the risk of cancer. Since stevia is low in calories, it can help you reach your weight-loss goals.

Stevia’s antioxidant properties can help prevent cancer. Antioxidants help prevent damage to every part of the body, including the brain and heart, and premature aging. The antioxidants in stevia are essential for good health and may even offer more benefits than antioxidant-rich green tea (x).

Most people are happy dropping a few pounds. But sticking to a diet is hard work. Because stevia has so few calories and is sweeter than sugar, you can have your cake and eat it, too, meaning you can still enjoy dessert without piling on the calories from sugar. Many people find stevia makes it easier to stick to a diet (x).

Cholesterol has had a bad rap for years, but we can’t live without it. That said, not all cholesterol is bad. Studies have shown that stevia lowers levels of LDL (bad) cholesterol and triglycerides while increasing levels of HDL (good) cholesterol (x).

The number-one reason for doctor visits is for skin problems. Approximately 10 percent of the U.S. population — more than 30 million Americans — suffer from some form of eczema, and worldwide, about 20 percent of children and 3 percent of adults have some form of the condition. The red, bumpy skin associated with eczema is itchy and unsightly. Applied topically, stevia can reduce the spread of bacteria, soothing conditions such as eczema and dermatitis. It also acts as a steroid, offering relief for those whom standard medications have failed (x).

Osteoporosis is a condition causing weak, fragile bones, and women over 50 are at high risk for bone fractures. Stevia boosts calcium metabolism, which increases bone mineral density. This may make it a valuable treatment option for osteoporosis (x). Research is ongoing, but scientists are eagerly pursuing this exciting discovery among other stevia benefits to our health.

Stevia vs. Other Sugar Replacements

Finding a replacement for sugar is both easy and hard. There are lots of choices out there.

Both contain virtually no calories, and neither affects blood sugar, making them suitable for diabetics and those following the keto diet. Neither promotes tooth decay. They are also both heat stable, meaning they’re great for baking. Sucralose is derived from sugar and does not have a bitter aftertaste, but stevia offers other health benefits, such as lowering blood pressure and offering antioxidant protection.

Xylitol is a sugar alcohol with about half the calories of sugar (about two calories per gram). It’s a common additive to diabetic foodstuffs as it doesn’t affect blood sugar levels. Like stevia, it can be used for baking. But high doses of xylitol may produce a laxative effect and, over the long term, may cause the growth of tumors.

Erythritol is another sugar alcohol. It tastes similar to sugar but is less sweet, so you need more to get the same flavor. It has almost no calories and registers zero on the glycemic index. The body absorbs erythritol into the bloodstream before it reaches the colon, so it’s less likely to cause intestinal upset than other sugar alcohols. Some sugar substitutes combine erythritol and stevia.

Consumed in moderation, stevia is safe for most people. However, some people have reported mild side effects, including bloating, cramping, dizziness and headache.

Very high doses can cause blood pressure to drop significantly. Nonetheless, individuals with diabetes or low blood pressure should talk to their doctors before taking stevia extract to determine whether it can worsen either condition (x).

It’s possible to have an allergic reaction to stevia. Those with allergies to ragweed, daisies, marigolds or other related plants may react to it. Children and pregnant or nursing women should talk to their doctors before taking stevia supplements.

There’s no federally recommended guideline for how much stevia you should take. In 2008 the World Health Organization (WHO) conducted an extended study that determined a daily intake of 4 milligrams per kilogram of body weight (about 2 milligrams per pound) is safe (x).

That said, upper limits will vary by individual. Another study found that individuals with diabetes could safely consume 15 milligrams per kilogram per day. A study assessing the effects of sugar substitutes in patients with high blood pressure found that study subjects could take up to 1,500 milligrams daily without experiencing adverse effects. It is important to note that 1/4 teaspoon of ground stevia is equivalent to 1 teaspoon of sugar. You do not need much to get the sweet flavor (x).

We all love our sweets, but the negative side effects of sugar are something we can do without. Stevia is not only a safe, tasty way to treat yourself but also a sugar replacement offering many health benefits. It can help lower cholesterol and improve blood pressure, and it may even help prevent cancer.