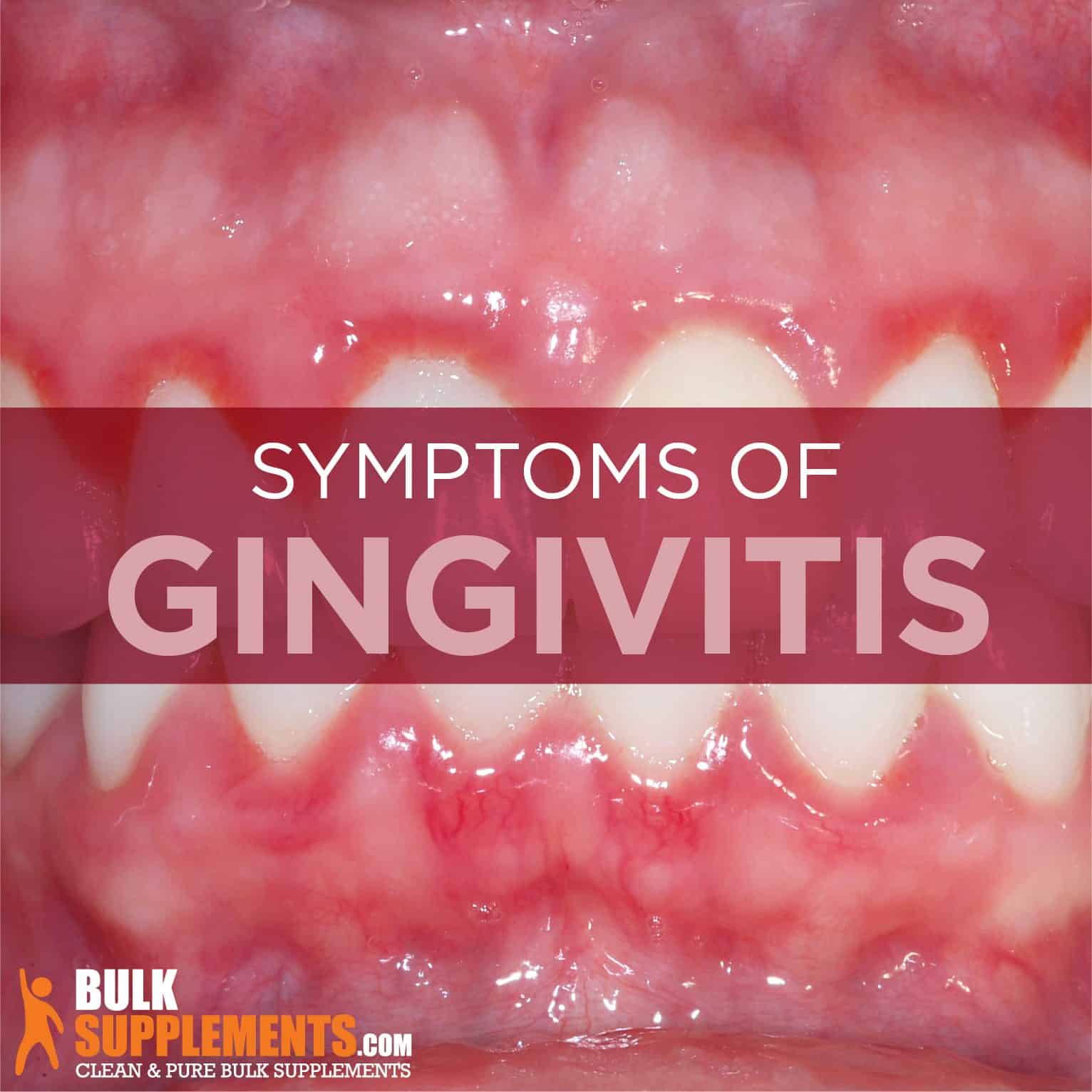 Gingivitis is a non-destructive periodontal disease caused by inflammation of the gingiva (tissues that surround and support the teeth). Inflammation could be caused by a buildup of plaque, a naturally occurring sticky film filled with bacteria. Plaque releases toxins that lead to irritation of the gums, which results in inflammation. It is a very common dental problem, and many people suffer from it at one time or another. Gingivitis is rare in children, but mainly begins during early childhood or puberty. It can occur and disappear throughout one’s lifespan.

An individual might be unaware that he or she has gingivitis since it can be a mild type of gum disease. It causes little or no pain. However, if left untreated, gingivitis can lead to periodontitis. This is more severe and may eventually cause loss of teeth.

One symptom of gingivitis is bad breath. Bad breath is caused by the same bad bacteria that cause gingivitis. Healthy gums are firm and tightly fitted around the teeth. They are pale pink in color. Once affected by gingivitis, gums become swollen and puffy and are dark red in color. Other symptoms of gingivitis include bleeding and tender gums. Do not ignore these signs as they could signify more serious problems.

Gum disease is linked to several health problems like heart disease and diabetes that affect the whole body (x, x). This gum disease can disappear in a few days so long as one practices good oral hygiene.

There are two main forms of gingival diseases (x):

When gums are inflamed, they turn red and become sensitive to the touch because the gums are attacked by toxins released by plaque. These toxins cause irritation on the gum tissue. They pile up on the gum line, which many consider the main cause of gingivitis (x).

Red gums is an obvious sign of gingivitis. They may also be dusky red. The color changes from the normal pale pink in healthy gums (x).

Gum recession is common in many people with gingivitis. Recessed gums tend to reveal a bigger part of the tooth as compared to healthy gums. Thus, teeth appear longer than when compared to their size before the gum disease developed (x).

Also known as halitosis. Chronic foul breath is the primary warning sign of gingivitis. According to the American Dental Association (ADA), bad breath indicates poor dental care. Foul breath may come in tandem with an unpleasant taste in the mouth. It could be triggered by the millions of bacteria in the plaque that produce smelly waste products (x, x).

A Pocket Between Tooth and Gum

A patch or area may develop between the tooth and gum. There may be several pockets in the mouth. Food particles may get into these pockets and cause the growth of bacteria. These bacteria may irritate the gum tissue and, if not treated, can lead to the development of an infection.

Pus Between the Tooth and Gum

When there is gum recession, a large part of the tooth becomes exposed, which makes the teeth become more sensitive to cold beverages and foods.

People with gingivitis may have bleeding gums, especially when they brush or floss because the gum tissue is weak due to bacterial infection.

This refers to the way the teeth fit when a person bites down. It could indicate the presence of periodontitis.

Individuals who suffer from gingivitis may have one or all of these symptoms of gingivitis. One should see a doctor if they suspect the presence of any gum disease.

Who Can Get Gingivitis?

Groups that are at increased risk of developing gingivitis are:

This typically comes as a result of poor oral hygiene. Plaque is a sticky film containing bacteria that accumulates between and around the teeth. The plaque forms when sugar and starch in food come into contact with bacteria found in the mouth. Once the plague forms, it triggers an immune response, which will eventually cause the destruction of gingival tissue (x).

The plaque should be removed on a daily basis because it rebuilds quickly. If it is not removed, the plaque hardens into tartar or calculus at the bottom of the teeth.

These include the menstrual period, pregnancy, menopause and puberty. These changes may trigger the sensitivity and inflammation of the gums. This makes it easier for gingivitis to occur. It is vital that one improves their dental care while undergoing these physical changes (x, x).

Failure to brush or floss regularly puts an individual at a greater risk of developing the condition — it makes it easier for gingivitis to develop. However, one can easily avoid this issue (x).

Medications can also affect oral health. Some interfere with the flow of saliva, which has a protective role on teeth and gums. Some drugs like Procardia, Adalat and the anticonvulsant medication Dilantin can cause abnormal development of gum tissue (x, x).

Tobacco use is a major risk factor related to gum disease and may decrease the possibility of successful treatment. Research shows that smokers are at a greater risk of developing gingivitis by up to 7 times that of non-smokers (x).

This deprives the body of beneficial health nutrients and makes it difficult for the body to protect itself from an infection like gingivitis (x). For example, vitamin C deficiency is linked to gum disease.

Family History of the Dental Disease

This can be a significant factor in the development of gingivitis. Children with a parent that had gingivitis are at a greater risk of developing the same. It can also manifest due to bacteria acquired during childhood (x).

Stress is associated with many health conditions like cancer and hypertension. It is also a risk factor for gum diseases. Stress makes it difficult for the body to combat and fight off infections, including gingivitis (x).

Use of Anti-Gingivitis Toothpaste

One should use toothpaste that is able to get rid of plaque from the teeth and around the gum line.

This should be done every three months once the bristles become worn out as they can only get rid of less plaque.

Brush your teeth regularly. Brush in the morning and before heading to bed. It is also advisable to brush after a meal or snack. Floss at least once daily. Flossing before brushing allows the loose bacteria and food particles to wash away more easily (x).

Healthy habits like healthy eating and controlling blood sugar for individuals with diabetes is essential in managing and maintaining gum health (x).

Visiting a dentist regularly for cleaning keeps gingivitis away. Visits should occur in intervals of six to 12 months. Professional cleaning is essential for people with risk factors like smoking, dry mouth and medications. Annual dental x-rays can identify diseases not noticeable by the naked eye and also monitor any changes in a patient’s dental health (x).

Treatments that can fight against gingivitis include:

This is essential in dental health as it helps in getting rid of disease-causing bacteria found in the mouth (x). It is actually a popular ingredient in various tooth gels. As a dietary supplement, take 1,000 mg of aloe vera extract powder once daily with 8 oz of water or beverage of choice, or as directed by a physician.

Many regard turmeric as a superfood. It is effective in preventing gingivitis and keeping plaque at bay (x). This is largely thanks to its anti-inflammatory benefits. It has an active component called curcumin, a powerful anti-inflammatory agent with a powerful antioxidant effect (x). Take 1,000 mg of curcumin natural turmeric extract powder once a day. Take it along with water or a meal.

Gingivitis is a common dental problem that can cause bad breath and poor oral health. It is typically a result of the formation of plaque around the base of the teeth and on the gums. Poor dental health can lead to gingivitis, and the condition can also be triggered by health issues like diabetes and cancer. Treatment options for gingivitis include taking oral antibiotics, bone and tissue grafts and flap surgery, among many others. Natural remedies for gingivitis include taking aloe vera powder extract and turmeric powder extract.