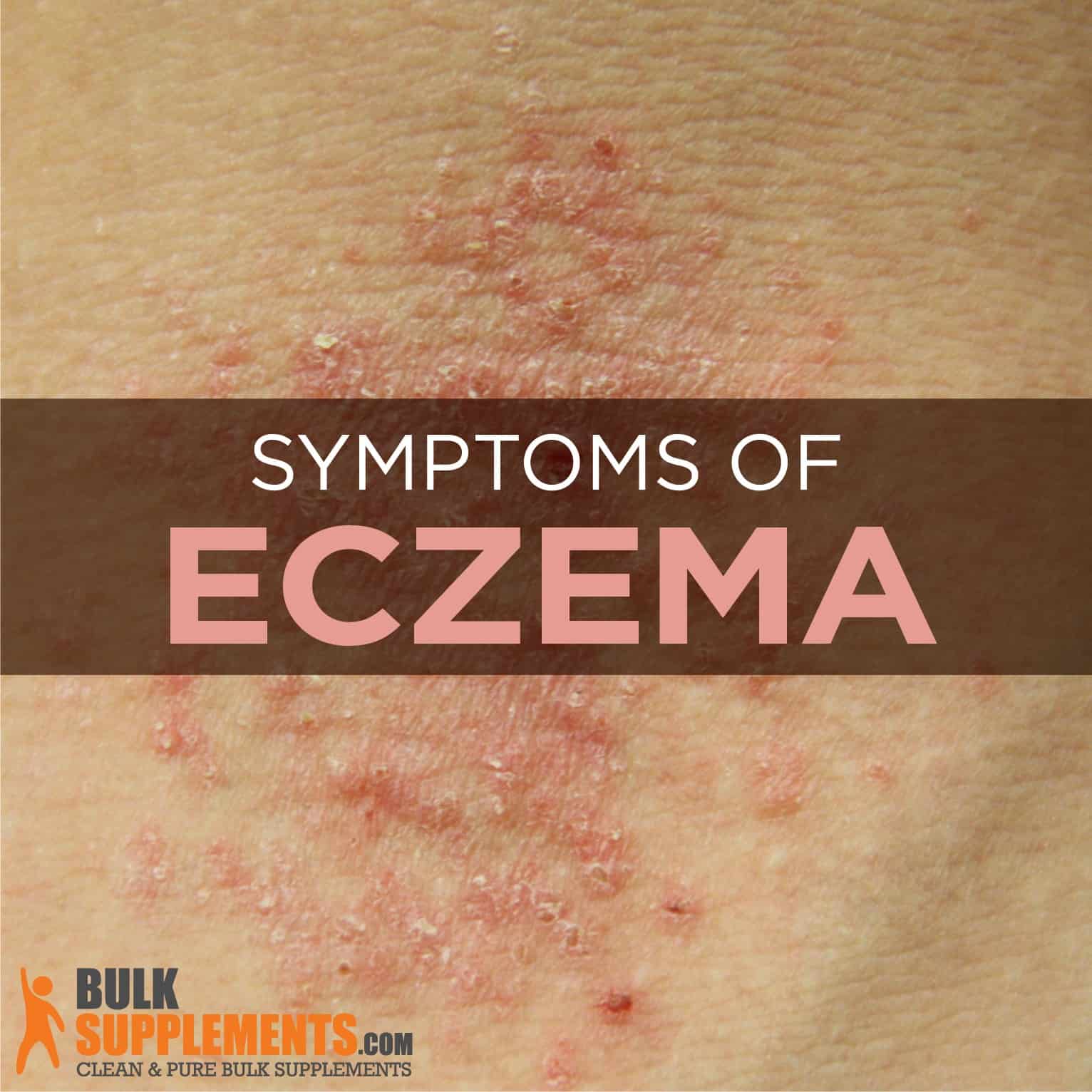 If you’ve been plagued by itchy, inflamed skin, scratches appearing out of nowhere and red rashes, you may have eczema. Eczema is a common skin problem that, thankfully, isn’t contagious. Contrary to some common beliefs, eczema isn’t an infection. Instead, it is a hypersensitivity to environmental triggers, which causes itchy skin, often covered with scaly dry patches. Triggers can be anything from laundry detergent to dyes, soaps, pollen or fabrics (x). Although the terms eczema and atopic dermatitis are sometimes used interchangeably, atopic dermatitis (AD) is a form of chronic, severe eczema (x).

Over 30 percent of Americans have eczema (x). It starts as early as infancy and may last until adulthood; in sum, it tends to come and go as far as fluctuations. For some people, it flares up but then fades for months or years. Some of those with eczema as children will also have it as adults, but others will “grow out” of it.

Although eczema and atopic dermatitis aren’t infections, they can lead to infections because the itching is so intense that people often break the skin with their fingernails, thus leading to infections of the epidermis (x).

Eczema is one of three disorders called the atopic triad — the tendency for hay fever, eczema and allergic asthma (x) — to occur together. A person with an atopy allergy usually is hypersensitive to dander, dust mites, pollen, certain foods or environmental pollutants, as well as some kinds of fabric, soaps, dyes and chemicals.

Causes of Eczema and Atopic Dermatitis

Eczema is thought to be caused by a genetic flaw that reduces or inhibits the body’s production of filaggrin (x), a protein that uses keratin to form a tough barrier-like structure in skin cells (x). People with atopic dermatitis may lack the correct amount or correct type of filaggrin, which can cause irritants and allergens to enter the skin much more deeply than they normally would (x).

Eczema’s symptoms vary from person to person. It often shows up as itchy skin with no sign of rashes at first. Other common signs of eczema include:

Often mistaken for eczema, red skin syndrome (RSS) is a reaction to steroidal treatment for eczema and other itchy skin conditions (x). Extended use of topical corticosteroid treatments can lead to burning, red stinging skin. The rash starts at the area where steroid creams have been used the most, but then often spreads across the body. RSS mimics eczema at first, but develops into a more serious, systemic condition (x).

How to Tell If Your Baby Has Eczema

Babies will get a red rash on their cheeks and scalps, while older children may have it in skinfolds in the knees and elbows. A baby with eczema may squirm vigorously when held or placed in their cribs. The rash will be present on the tops of the buttocks and will lack the puffiness associated with a diaper rash.

Locations of Eczema and Psoriasis

Eyelid dermatitis symptoms include swelling, itching, pain or burning sensation, thickened skin, red rash and irritated scaly skin. Xerotic eczema is found on the lower legs and in the armpits. Dyshidrotic eczema affects the hands and feet. It seems to be triggered by exposure to nickel in foods (x).

Psoriasis on the hands and feet (HFP) is inconvenient to live with, given that our hands and feet are constantly in contact with surfaces, which keeps the irritated skin raw. Products that contain coal tar, including creams and gels, can ease itching. Salicylic acid can reduce the thick, itchy scales of psoriasis as well. Combinations of these treatments often work better than one treatment alone.

The Differences Between Eczema and Psoriasis

Psoriasis and eczema aren’t the same condition. In fact, children and adults can have either psoriasis or eczema, or both at the same time. The hallmark sign of psoriasis is thick patches of skin covered in whitish or silvery scales (x). While both conditions can produce red, cracked scaly skin, only psoriasis causes white or silver scales. The thick clumps of skin in psoriasis are called plaques (x, x).

Psoriasis is an auto-immune disorder that leads to overactive production of skin cells (x). Psoriasis shows well-defined silvery scaly patches that are found in the “bend” areas of the body, including knees and elbows (x). The scalp, face and buttocks aren’t spared, either. Psoriasis causes mild to moderate itching, whereas eczema provokes intense itching that can lead a person to make deep scratches into the dermis.

Psoriasis and eczema are both skin disorders roughly characterized as inflammation of the skin, but they are not the same condition. Neither will develop into the other, although sometimes eczema and psoriasis will occur at the same time.

Both severe eczema and psoriasis can lead to infection due to scratching inflamed skin that’s prone to cracking and bleeding.

Eczema can be provoked by certain foods (x). Food sensitivity varies widely from person to person. Reactions are usually delayed by six to 24 hours. Some foods to avoid when you have eczema include:

Some people with eczema may be able to eat some of the above, but others may be unable to eat any of them without suffering a flareup.

Treatment and Management of Eczema

Eczema cannot be cured, but it can be treated. The first step in treating it is reducing its incidence. Identify any foods in your diet that are associated with outbreaks or worsening of the condition. Also try to identify anything like laundry detergents or laundry additives that may cause a negative reaction. After removing or reducing everything in your environment that’s aggravating eczema, you must control the itching (x).

Choose barrier creams instead of lotions. Barrier creams are thick and often say “skin healing” on the label. These creams can be expensive and petroleum jelly can work just as well. The goal of heavy barrier creams or petroleum jelly is two-fold; the cream retains moisture while preventing the irritant that’s causing the itch from reaching your tender skin (x).

Keeping dry, irritated skin moist and refreshed gives you immediate relief. Avoid hot showers; instead have a bath or shower in lukewarm to warm water. You can add vinegar, salt, colloidal oatmeal or baking soda to your bath water. Use non-soap cleansers only (x).

Dry skin causes eczema flares. Choose a moisturizing hand cream that’s specifically advertised for treating this condition. Lotions and creams that are made specifically for this condition tend to have no harsh ingredients and no powerful fragrances. Fragrance and lots of additives can make irritated skin even worse (x).

Keeping eczema under control means coordinating with a dermatologist who can keep you supplied with prescription topical treatments, like topical calcineurin inhibitors and PDE4 inhibitors. These prescription medications reduce rashes, dryness, redness and itching.

What Natural Oils are Good for Eczema?

Is coconut oil good for eczema? Coconut oil soothes and calms eczema’s itchy, cracked skin. Coconut oil has lots of lauric acid, a fatty acid that’s good for skin (x). However, some people are allergic to coconut oil, so care should be taken if eczema gets worse after applying coconut oil to irritated skin (x) (x). Coconut oil’s skin allergy symptoms include:

About 70 percent of people with eczema get better with phototherapy (x). Exposure to sunlight may also help to heal eczema (x).

Aloe vera extract powder is a common treatment for various skin conditions. As a dietary supplement, take 1,000 mg (rounded 1/2 tsp) once daily with 8 oz of water or beverage of choice, or as directed by a physician. Use topically as desired.

Vitamin C can’t be made by the human body, so a steady intake is important for a healthy immune system. It is also necessary for the production of collagen, a central part of healthy skin (x). As a dietary supplement, take 1,000 mg (1/4 tsp) up to three times daily or as directed by a physician.

Beta glucan is a water-soluble fiber that’s taken internally or applied topically for eczema and many other conditions. It’s known to help quiet an over-responsive immune system by reducing the effects of cortisol (x). Take 250 mg once daily with a meal, or as directed by your physician.

Biotin is also known as vitamin B7 and is essential for healthy hair, nails and skin. It is one of the most important supplements for skin and often used to help treat eczema and psoriasis (x). Take 100 mg (rounded 1/64 tsp) daily, or as directed by a physician.

Copper gluconate is often used in cosmetics as an anti-aging agent. It stimulates the production of new skin cells, as well as collagen fibers, which expedite the healing of superficial tissue damage caused by scratching (x). Please note that copper gluconate is potentially toxic in even small quantities, so extreme care must be taken to prevent an overdose. No more than 4 milligrams should be taken in a day. Always allow a physician to guide your use of copper gluconate.

Turmeric contains the powerful anti-inflammatory curcumin, which reduces inflammation in skin tissues and joints (x). Take 1,000 mg (just under 1/2 tsp) daily, or as directed by a physician.

Eczema is a painful, chronic skin condition that’s incurable but highly treatable. Many home remedies for eczema are inexpensive and readily available. Dietary supplements can boost the skin’s natural ability to heal and regenerate.