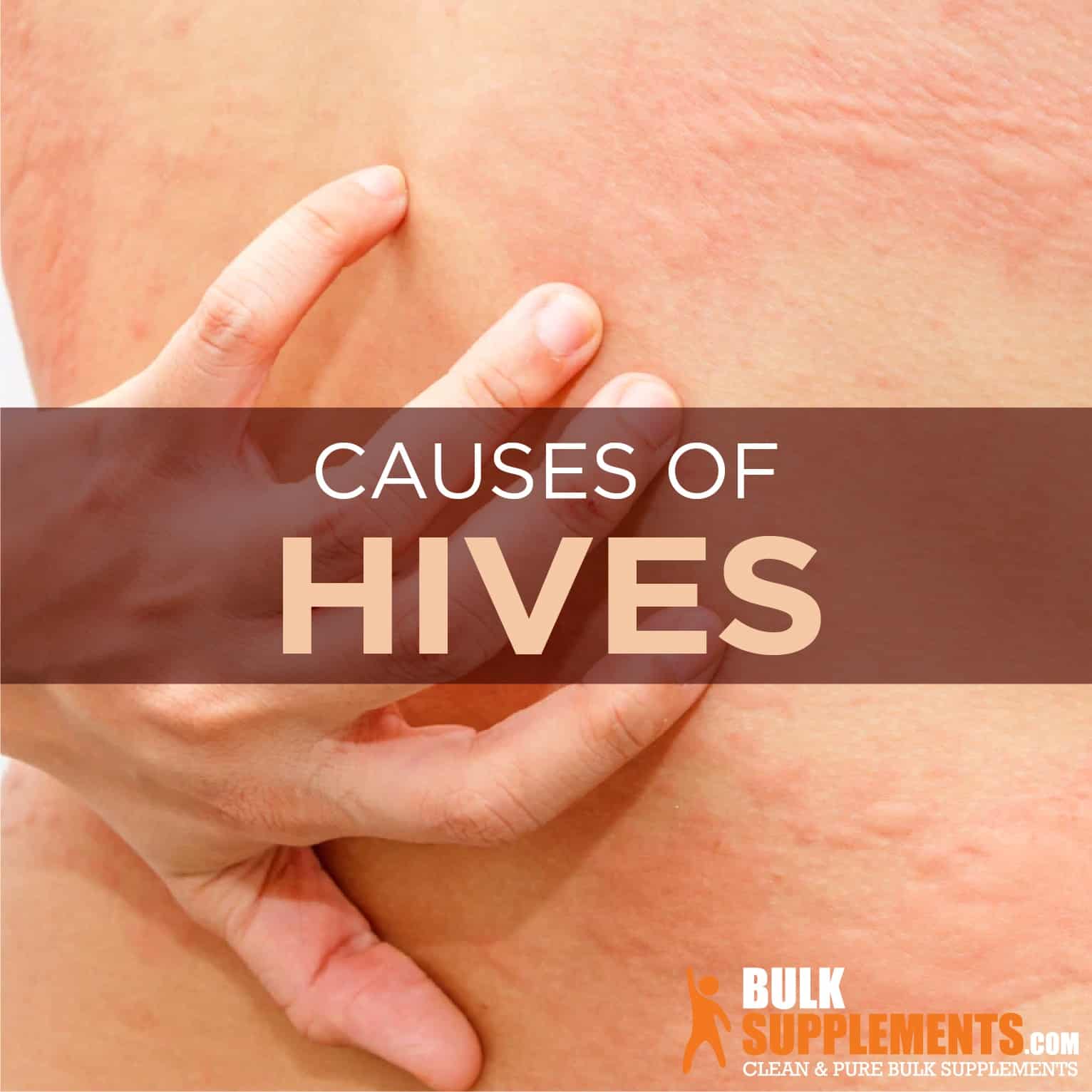 Many things can cause itchy skin, including rough fabrics and dry skin, but hives is a bit more complex than a simple external irritation.

Hives are itchy and often raised bumps, welts, wheals or patches on the skin that occur as the result of exposure either internally or externally to an irritant. Usually, hives are temporary and harmless. They generally leave no permanent scarring even if one does not receive treatment (x).

Hives present as red in color, sometimes with a white center, and their size can range from minute to several inches in diameter. They can appear suddenly and can also result from extreme temperatures, sunlight or viral infection in addition to exposure to foreign substances (x).

Hives are often red in color, but can also be flesh-colored. They may present with or without a white or flesh-colored center. They can appear anywhere on the body, and they may vary in size, even during the same episode.

The size and location are not necessarily definitive throughout the course of the outbreak, and they may grow, shrink or change location as time passes. The colored patches may be raised from the normal surface of the skin or they may appear underneath.

The single most prominent and consistent symptom of hives is the itching sensation, which is often severe. This can scale beyond normal distraction and inconvenience to an un-ignorable urge requiring immediate relief.

The itching, blotching and potential welts, regardless of their severity, rarely last longer than 24 hours, even without medication or treatment. In some cases, however, hives can reoccur for more than six weeks, occasionally even for months or years. This is called idiopathic urticaria (x).

Hives are often the product of an allergic reaction. Histamines are released by tissue mast cells in response to exposure to an allergen. These histamines increase blood flow to and permeability of blood vessels, causing the inflammation and itchiness we know as the familiar symptoms of hives (x).

Only 0.4-0.8 percent of children and 3 percent of adults have the potential to suffer life-threatening allergic reactions to common insect stings. Hives, on the other hand, are a much more frequently experienced result. The mildest of reactions to an insect sting may produce a small amount of redness and swelling at the location of the sting. Some more severe reactions can include the expansion of the inflamed patches to a larger area originating from but extending beyond the site of the sting. In some instances, though, allergic reaction to an insect sting may include an outbreak of hives all over the body or at various locations aside from the area of the sting itself (x).

Allergic reactions to food can be extremely severe, even if there is only a small amount of the allergen present. Commonly, one of the minor reactions of a food allergy is the outbreak of hives. Food allergies may affect somewhere between 6 and 8 percent of toddlers and infants, as well as up to 3 percent of adults (x). Many confuse food intolerances for food allergies, but intolerances are much less serious. Some common foods that cause people to experience allergic hives include citrus fruits, shellfish, peanuts, eggs, milk and tree nuts (x).

Just about anything can cause allergies. People can suffer from an alcohol allergy, for instance, which can result in hives. This, however, should not be confused with the very common (especially in those with Asian ancestry) flushing that occurs in many people after they imbibe even a small amount of alcohol (x). Some people also suffer from allergies to certain commonly used medications including antibiotics (such as penicillin and certain pain-relieving drugs). Chemicals and plants like nettles (nettle rash) can also cause hives when they come in contact with the skin (x).

Some people have an increased sensitivity to sunlight that can produce hives as a result of that exposure. For some, the allergy is hereditary and permanent, but the hives reaction can also occur due to a mixture of sunlight and certain plants and medications. With sun allergies, the hives are generally limited to only those areas that have actually suffered sun exposure. The hives usually appear within minutes to hours of the exposure to sunlight, and most clear up without treatment.

Some people experience hives in response to fluctuations in temperature. Heat hives (or “cholinergic urticaria”) is a relatively common condition caused by increased body temperature. Prolonged exposure to sunlight, even when a person does not suffer from a sun allergy, can still cause overheating that results in heat hives. Heat hives can also occur as the result of exposure to overly hot water (x).

Similarly, cold water and cold temperatures can cause cold hives (or cold “urticaria”). Though it may seem counter intuitive, cold hives tend to worsen as the body temperature warms after exposure to the cold. However, it may also present as swelling of the hands while holding cold objects or swelling of the lips while consuming cold food or drinks (x).

Exercise often causes the body’s core temperature to increase, which can result in hives. These hives may appear anywhere on the body, and can sometimes be slightly mitigated by clothing meant to keep athletes cool, along with controlled environmental conditions, such as air conditioning in a gym. Occasionally, this condition can be treated with medication. Because the symptoms are produced by the increased body temperatures that result from exercise, they usually subside once the body’s core temperature has sufficiently cooled. This can be hastened with cooling strategies such as water immersion.

Sometimes hives are not the product of a physical irritant at all, but rather the body’s response to psychological distress. During periods of high stress, your body may produce these red, itchy, sometimes burning welts (known as wheals) or blotches. The best remedy for this situation is, of course, a decline in the stress factor responsible. However, times of stress this significant can have extended duration, and sometimes the outbreaks themselves even add to a person’s distress. Antihistamines are recommended for a quicker medical solution, though these should not be taken long term unless directed by a physician.

In addition to their initial causes, heat, exercise and stress can sometimes cause hives to worsen — all factors which can contribute to inflammation (x).

Avoid anti-inflammatory medications when treating hives. Antihistamines are the main way hives are treated medically. However, these can have side effects in children and the elderly and should always be taken according to instructions.

There are several natural remedies and treatments for the symptoms.

Aloe vera is a common remedy for sunburn. Its cooling and soothing properties make it popular for decreasing inflammation and itchiness. Aloe vera contains beneficial enzymes, vitamins A and C and antioxidants. It is easy to use and available for purchase without a medical prescription (x).

A naturally occurring flavonoid, quercetin is present in foods such as broccoli, some fruits, teas, herbs and, most abundantly, in onions. It is a potent antioxidant and is especially beneficial against hives reactions due to its ability to inhibit histamine production in the body. Quercetin, when used for remedy, is most effective in the form of an extract (x).

An oil created from the tissues of oily fish, fish oil is famous for containing omega-3 fatty acids and is used in a number of different natural treatments. The fatty acids, docosahexaenoic (DHA) and eicosapentanoic (EPA), are not produced within the fish themselves, but instead accumulated from phytoplankton (x). The third of the omega-three fatty acids is ALA, which is an essential fatty acid and cannot be produced by the body. This means that it has to come from foods and beverages. Our bodies convert a small amount of ALA into EPA, which can then be converted to DHA, but the amount is too small and the remainder is better attained through fish oil supplements (x).

Colloidal oatmeal is a powder that creates a milky liquid when mixed into water, and soaking in it can sooth itching and skin irritation. The oatmeal draws moisture from the skin and helps to restore your skin’s normal pH balance. Meanwhile, the relative coolness of the water helps to reduce body and skin temperature, further fighting the hives breakout.

This practice involves inserting a number of very thin needles into the body in various locations through the skin. It is still quite common in Asia as a primary care technique for the treatment of urticaria (x). While eastern medicine subscribes to the notion of using acupuncture to manipulate the body’s qi, western medicine speculates that acupuncture may interrupt the body’s immunological reaction. Some studies indicate that acupuncture has shown positive results in decreasing hives reactions (x).

Hives may appear as raised welts above the surface of the skin or as imperfect blotches beneath it. They can vary significantly in size, from less than a quarter of an inch to over 9 inches in diameter. Their appearance is generally characterized by discoloration. Different causes may produce an outbreak of hives in different people. In many cases, the cause is the body’s allergic reaction to something ingested or to something with which the skin has come into direct contact.

Do not treat hives with artificial anti-inflammatory or pain-relieving medications, as these have the potential to worsen the condition. Natural, homeopathic and home remedies, however, are helpful. Some of these remedies include aloe vera, quercetin, fish oil, oatmeal baths and acupuncture. A doctor may administer medical antihistamines in appropriate and urgent situations