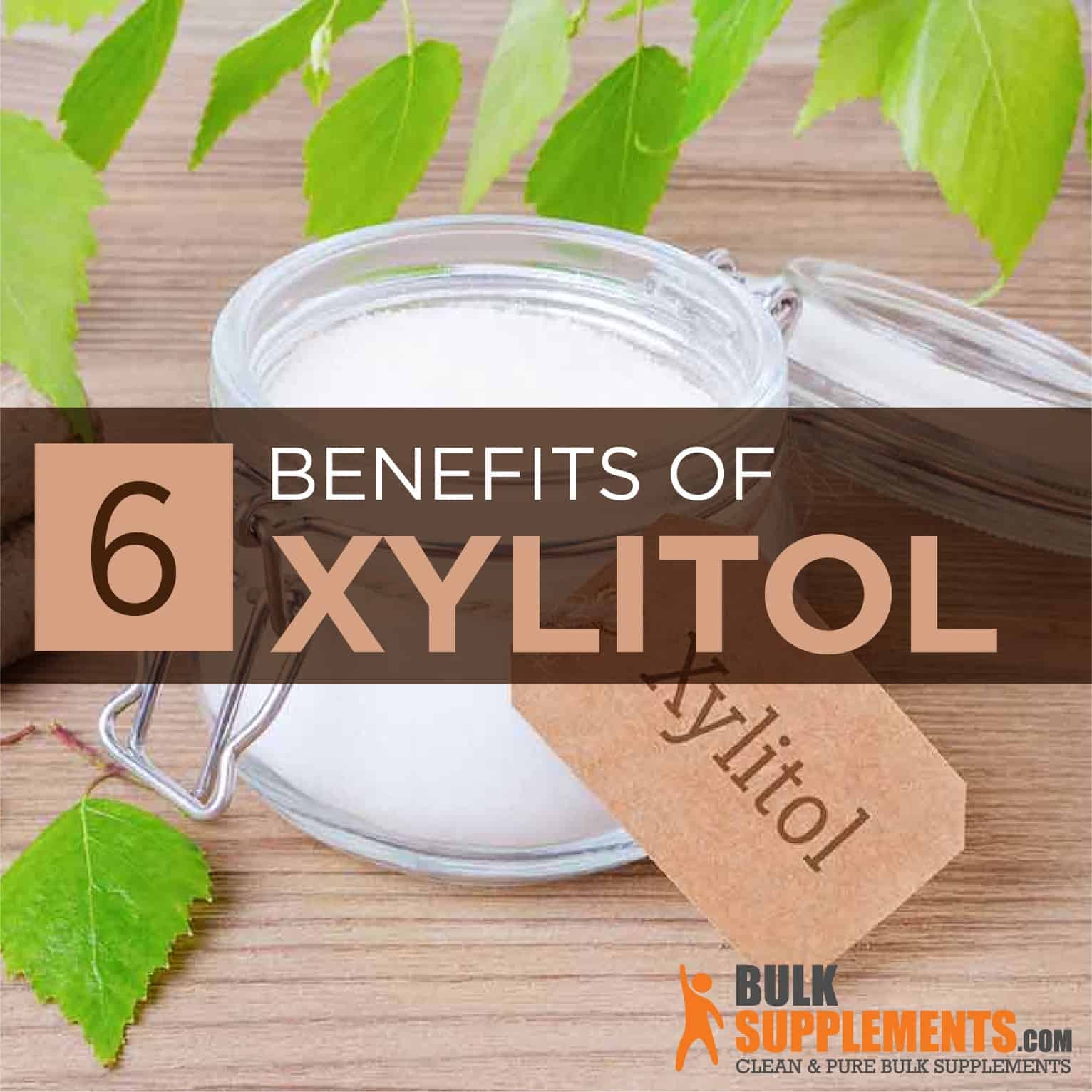 We know what you’re probably thinking—what is xylitol? Well, if you chew natural gum or use natural toothpaste, most likely you have come across it. It is a controversial ingredient because there are claims that it is a safe and healthy alternative to table sugar for weight loss purposes and controlling blood sugar. Studies claim it may also help support gut bacteria and fight infections in the body. But on the contrary, there are no studies that definitely prove these claims (x). Make sure to seek medical advice before you try xylitol or any other supplement.

In the late 19th century, one French scientist and two German scientists simultaneously discovered the 5-carbon sugar that was eventually called xylitol. For the better part of the 20th century, it prevailed as an experimental compound. However, the war in Europe led to sugar shortages and scientists in general were compelled to discover new sweeteners. In some countries, such as Finland, xylitol gained popularity as a sweetener. But researchers had not yet thoroughly studied the health benefits of sugar (x).

Almost seventy years later, in 1963, the United States Food and Drug Administration (FDA) approved xylitol for dietary use and many other countries followed the approval process. In the early 1970s, researchers conducted studies on the effects of the compound on dental plaque. After that, there were thousands of supported clinical studies on its impact and the scientific community recognized the potential benefits of xylitol. Since it gained scientific approval in the early 1970s, the compound can be found in hard candies, mints, chewing gum, nasal sprays and countless other consumable products (x).

Xylitol is an attractive commodity and used in different products that particularly relate to your health and well-being. It is a chemical compound called a “sugar alcohol” and it is used mostly as a sugar substitute. Xylitol is sweet like table sugar but without some of the negative effects. It holds close to 40% fewer calories and 75% fewer carbohydrates. It also has a crystalline, granular structure, unlike sugar.

The compound is not digestible by the bacteria in our digestive systems. Once ingested, the body absorbs and metabolizes xylitol very gradually. It does not completely absorb into the bloodstream like sucrose sugar and should not cause the same potentially negative side effects, such as interfering with blood sugar or insulin production (x).

What is Xylitol Made from?

You may wonder what foods contain xylitol or where xylitol comes from. It is naturally found in many fibrous vegetables, fruits and corn cobs. You can even find it in sugar cane pulp, specific seed hulls and the cellulose fiber of wood.

Most manufacturers prefer to extract xylitol from corncobs because the environmental impact is minimal compared to cutting down trees, whereas corn cobs may go unused (x). Because xylitol looks and acts similar to other natural or alternative sweeteners, people often use it just like sugar in cooking and preparing food.

There are other types of sugar substitutes comparable to xylitol including:

What is Xylitol Used for? What are the Health Benefits?

We reached out to Lisa Richards, a certified nutritionist, for insight. Richards is also the creator of The Candida Diet, a website about the benefits of a low-sugar, anti-inflammatory diet. Richards claims that xylitol has “a very low glycemic index” and should not cause “adverse effects on blood sugar or insulin” like sugar would.

What is xylitol’s main dietary use?Since the 1960s, people have used xylitol as a sweetener, typically with a positive influence on the body. The body absorbs the compound slowly, which reduces the calorie count to 2.4 calories per g or 40% less compared to other carbohydrates. Another benefit is that the system does not need insulin—which regulates blood sugar—to metabolize xylitol. Because of its low glycemic index, xylitol typically does not produce the same effects on the body as regular sugar (x).

Saccharide sugar—or table sugar—may not be suitable for some people because of its potential for health risks. For example, patients with diabetes may need to avoid table sugar to avoid spikes in blood glucose. However, you might be able to add another sweetener to your life, such as xylitol (x).

After you eat saccharide sugar, the gut wall absorbs it very quickly and it reaches your bloodstream within 15 to 20 minutes. Your pancreas reacts and may produce a great deal of extra insulin to bring your blood sugar down to a healthy level. However, repeating this behavior may cause the pancreas to overproduce insulin. The body may then develop insulin resistance, so that insulin receptors become less receptive to it. Finally, liver and muscle cells do not absorb glucose and instead the body stores it in fat cells, increasing the risk for weight gain or obesity and other metabolic diseases (x).

However, like we stated before, the body does not absorb xylitol, so it should not contribute to insulin resistance. It also has a lower glycemic index than regular sugar, meaning it does not cause spikes in blood sugar, which may be a healthier alternative for patients with diabetes or those trying to lose weight (x, x).

Countless studies and over 40 years of research suggest the efficacy and safety of xylitol as one of the tastiest and easiest ways to help prevent cavities, gingivitis and gum disease. Six national dental associations endorse the sweetener in candies and chewing gums. According to research, it may be a more beneficial alternative compared to sucrose.

Sucrose can potentially encourage bacteria to multiply in your mouth and to make acid, separating the enamel from your teeth and increasing the risk for tooth decay. Because the body does not absorb xylitol, bacteria in your mouth do not synthesize it. The result is a reduced risk for weakened enamel and possible protection from tooth decay or other dental issues. Other studies suggest that xylitol may help repair damaged enamel (x, x, x).

Xylitol also seems to provide prebiotic benefits, potentially helping to feed the favorable bacteria in your gut and maintain gut bacteria populations. It may also help prevent the growth of some species of bacteria, such as Streptococcus mutans (x). It is an oral bacteria but research associates it with other systemic diseases that affect the digestive tract like inflammatory bowel disease, a category that includes Crohn’s disease and ulcerative colitis (x, x).

Studies suggest that because of its potential ability to reduce or manage bacteria growth, xylitol may help with other infections in the body—including ear infections, influenza and pneumonia. It may be able to prevent the bacteria from multiplying in the body and causing infection (x, x).

Researchers conducted a study on xylitol for ear infections and according to the results, when the subjects consumed 8 g of xylitol orally once a day, it seemed to prevent roughly 40% of infections. There is a similar study in which the researchers administered a nasal spray containing xylitol to 10 children with chronic ear infections. The nasal spray may have reduced the infection by more than 90% (x, x).

In addition, Candida is a type of fungus which causes yeast infections when it overgrows. Candidiasis is the most common type of fungal infection among humans and can disrupt bacteria populations in the body and damage the immune system. Research states that xylitol may also have antifungal activity and may be able to reduce the risk for candidiasis (x, x).

In comparison to its benefits, the risks of xylitol seem relatively minute. Xylitol is generally safe for humans to consume in regular doses. However, it’s important to consult a doctor before you take it. Like any supplement, it may cause side effects, including (x):

Similar to the other 5-carbon sweeteners, when you consume too much Xylitol, it can produce discomfort. Some individuals are more sensitive to the compound than others. Ideally, when you start taking the sweetener, begin with a small amount and work your way up to the suggested doses per day, depending on what your doctor recommends (x).

What is Xylitol’s Effect on Pregnancy & Breastfeeding?

There is not enough information available whether or not xylitol is safe or not for pregnancy and breastfeeding. However, the American Family Physician reports in an article that xylitol may prove beneficial during pregnancy and breastfeeding by helping to reduce oral bacteria, reducing the chance of transmitting it to unborn infants. But make sure to check with your doctor first before you try this supplement (x).

Xylitol may also be toxic to dogs, so keep it away from your pet by sealing it in a container and keeping it out of reach. Make sure you do not feed pets any food with xylitol in it (x).

How to Substitute Xylitol for Sugar

Whether you use xylitol sweetener as a sugar replacement or not, reducing table sugar from your diet is likely a smart choice. Generally you can use it as you would regular sugar to sweeten coffee, tea, baked goods, etc. But how much should you take? The recommended serving size for xylitol powder is 3,000 mg once or twice a day. But remember, you should have a doctor’s approval before taking it.

Where to Buy Xylitol

Are you interested in trying xylitol powder to potentially control blood sugar, improve oral health and reduce the risk of infections? Contact BulkSupplements.com to place an order today.

Xylitol can be an attractive alternative to sugar, particularly if you have metabolic concerns relating to weight or diabetes. The body doesn’t absorb the compound, so it doesn’t raise blood sugar levels compared to table sugar. The sugar substitute may also be a better alternative for your teeth because oral bacteria doesn’t use it to break down enamel and cause dental issues like cavities. There are also reports on its potential antibacterial, antifungal and prebiotic properties that may help reduce infections and support digestion.

But there are some points to consider when taking xylitol and it can cause side effects, like any supplement. Same as sugar, too much can produce digestive problems like diarrhea, bloating and gas. Always make sure to consult a doctor before you take xylitol or any other supplement to make sure it is the right supplement for you.

*** These statements have not been evaluated by the Food and Drug Administration. These products are not intended to diagnose, treat, cure or prevent any disease.