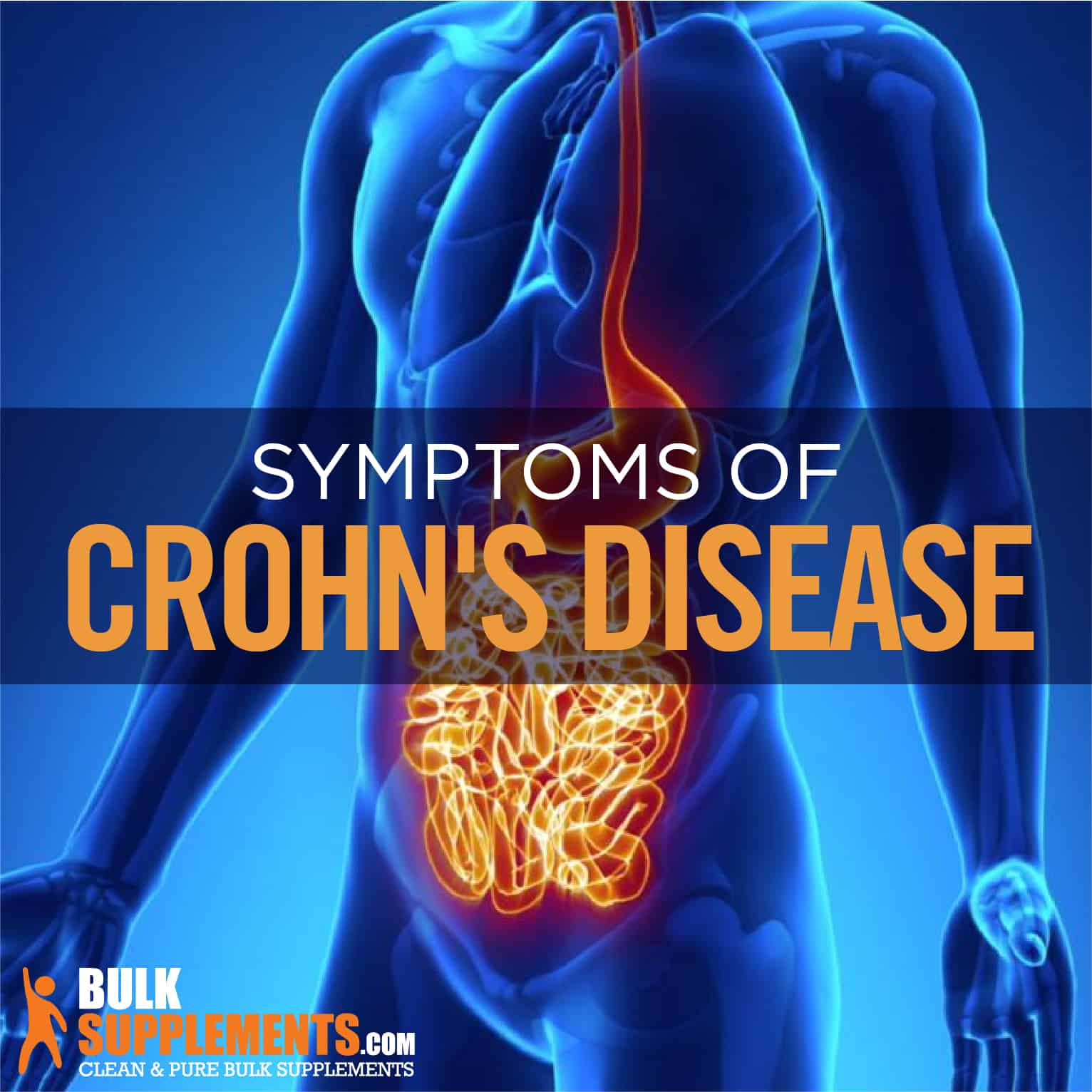 What is Crohn’s Disease?

Crohn’s disease is an inflammatory bowel disease (IBD) that can affect any part of the entire gastrointestinal (GI) tract. It was first documented in 1932 by Dr. Burrill B. Crohn, for whom the disease is named after. He and his colleagues, Dr. Leon Ginzburg and Dr. Gordon D. Oppenheimer, described it as a chronic disease that most often affects the end of the small bowel and beginning of the colon.

Symptoms of Crohn’s disease may be acute at first, but may become worse over time if not treated properly. Very rarely does the disease present suddenly without warning.

Much has yet to be researched and studied about Crohn’s disease as it is still unclear what exactly causes it. However, there are a few telltale early warning signs that can help with diagnosis and treatment either medically, surgically or with natural supplements.

The early stages of Crohn’s disease may have any or all of the following symptoms:

Other general symptoms that may present with Crohn’s disease are:

Crohn’s disease in children can be a serious chronic illness that leads to loss of energy, appetite and cause developmental and growth delays. In women, Crohn’s disease may cause loss of a normal menstrual cycle.

In the early stages of Crohn’s disease, the symptoms can be so general that they may be mistaken for other IBD’s, stomach aches from food poisoning or even allergies. Another disease commonly misdiagnosed as Crohn’s disease or vice versa is ulcerative colitis. But the diseases are very distinct.

It is important to get early and proper diagnosis for Crohn’s disease from a doctor to ensure flare ups for this chronic disease are kept under control as much as possible. If not kept in check, Crohn’s disease may cause fissures in the lining of the GI tract up to the anus, which cause pain and bleeding after bowel movements. It also may cause fistula to develop (x), which are tunnels that connect loops of the intestines to each other or even to the bladder, vagina or skin. When fistula or fissure develop, immediate medical attention and even surgery will be necessary.

On average, 70 percent of people with Crohn’s disease will need to get surgery.

Even though there are thousands of people living with Crohn’s disease (as many as 78,000 in the United States), not much is known about its exact causes or who is more likely to develop it. Even treatment and management options for Crohn’s disease may vary greatly from person to person.

However, there is significant evidence that shows some factors do increase people’s risk for developing Crohn’s disease. These factors include:

Lifestyle choices may also aggravate Crohn’s disease and its symptoms, but do not cause the disease in themselves. These may include:

Gut health is particularly important in treating and keeping Crohn’s disease under control from painful flare ups. Normally, the GI tract is full of beneficial bacteria that help to digest food and aid the immune system. Studies are also starting to support that beneficial bacteria in the gut can also affect mood and mental health.

Unfortunately, this natural immune response will cause the white blood cells to travel outside the intestinal wall and lead to inflammation, which does not subside as normal, leading to a chronic condition that thickens the GI tract walls and leads to ulceration.

Currently, there is no cure for Crohn’s disease. Doctors can only prescribe medication to treat the symptoms. Major surgery may also be necessary after some time.

In addition to a treatment plan monitored by a doctor, natural and herbal supplements may also ease the symptoms of Crohn’s disease more naturally.

Turmeric with black pepper has been shown to have numerous benefits for health. This root contains curcumin, which has powerful anti-inflammatory and antioxidant properties (x) that are magnified when taken with just a pinch of black pepper at the same time. Curcumin is a mixture of phytonutrients called curcuminoids, which give turmeric its distinct golden yellow-orange color. It is very popular as a kitchen and culinary spice in Asia and particularly in India, where its benefits have been touted in the traditional Indian healing practice called Ayurveda for hundreds of years.

Use curcumin powder as a substitute for turmeric in teas and cooking. In Ayurveda, a recipe for “golden milk” is recommended once daily to reap the benefits of turmeric. To make golden milk, boil a cup of milk (or coconut milk for a vegan version) and add one teaspoon of curcumin powder, a half teaspoon of ginger powder, a pinch of ground black pepper and honey (or any vegan sweetener) to taste.

The bark from the slippery elm tree has been used as a healing salve for skin inflammation and burns for thousands of years by Native Americans. They also used it to naturally treat gastrointestinal problems, sore throat and cough. The most active ingredient in slippery elm bark powder is mucilage, which occurs in some plants to protect them from wounds. When ingested, the mucilage coats, lubricates and soothes the mucous membranes of the GI tract, making it an excellent natural cure for Crohn’s disease and other IBDs.

To make a syrup of slippery elm, mix half a cup of water with ¾ tablespoons of slippery elm bark powder. Remove the clumps with a fork and simmer for about seven minutes on low heat or until the consistency is that of molasses. This syrup may be refrigerated for up to seven days.

Take a teaspoon of this syrup 3-4 times daily, but remember to take any medication 1-2 hours before slippery elm. The mucilage will prevent absorption of other medications or supplements.

Vegetables and fruits that have too much fiber can worsen Crohn’s disease symptoms, but fibers that work as prebiotics may help repopulate the GI tract with beneficial bacteria (x). Probiotics such as Bifidobacterium and Lactobacillus have been shown to significantly reduce inflammation in those with Crohn’s. Prebiotics like psyllium, though, have just enough fiber for the beneficial bacteria to feed on and multiply in the intestines.

It is best to take psyllium on an empty stomach. Mix one to two rounded teaspoonfuls of psyllium powder with a glass of water (around 8 ounces). Take up to three times a day.

Omega-3 found in fish oil is anti-inflammatory, so it is a promising supplement for Crohn’s disease. Studies on patients taking fish oil to keep Crohn’s in remission have been promising, but many have been reluctant to continue taking pills. This is because although there are no reports of serious side effects of fish oil capsules, the minor side effects (such as bad breath, flatulence and diarrhea) can be unpleasant.

However, omega-3 is a healthy fat that boosts the immune system and is an important source of energy for the body. But not all dietary oils are the same. Omega-6 and omega-7, although also sources of healthy fats, will make Crohn’s disease symptoms worse. An imbalance of too much omega-6 over omega-3 will also increase the risk of heart disease (x).

Although there is no set daily requirement for fish oil, the human body does not produce omega-3 on its own, which is necessary for optimal health. Therefore, if your diet does not regularly contain fish or vegetables rich in omega-3 fatty acids, it is best to take a daily supplement between 3 and 9 grams.

A vegan source of omega-3 is flaxseed oil.

In addition to lifestyle and diet changes and carefully following a doctor’s advice for proper medication, eastern treatments like acupuncture may also offer hope for remission.

According to a study conducted at Fudan University in Shanghai, China, patients who received a combination of acupuncture and moxibustion (x) (the burning of herbs over specific acupuncture points), presented increased levels of hemoglobin after treatment and a decrease in C-reactive proteins (an inflammation marker).

Many relaxation and stress relieving practices have been shown to benefit those who suffer from Crohn’s disease. The GI Research Foundation has released free resources of yoga classes and breathing exercises designed to relieve pain and anxiety, encourage calm and mindfulness and relax the body and nervous system.

Yoga classes which focus on deep breathing and restorative stretches would be ideal for those with Crohn’s disease or any IBD. As with most physical activity, it would be best to practice on an empty stomach or at least two hours after a meal. And if any pose does not feel right or seems to make your symptoms worse, come out of the pose carefully and stop. Continue the practice after consulting both the yoga teacher and your doctor.

Crohn’s disease is affecting more people from urban areas and there is still no cure for this IBD. But treatment options are available to prevent flare-ups and even keep the disease in remission for as long as possible. In addition to a treatment plan suggested by a doctor, which may include both prescription and over-the-counter medication, herbal and natural supplements for Crohn’s disease may also be beneficial. Changing lifestyle habits such as reducing stress, eating healthy gut flora and seeking alternative practices like acupuncture and yoga can also help relieve Crohn’s disease symptoms.