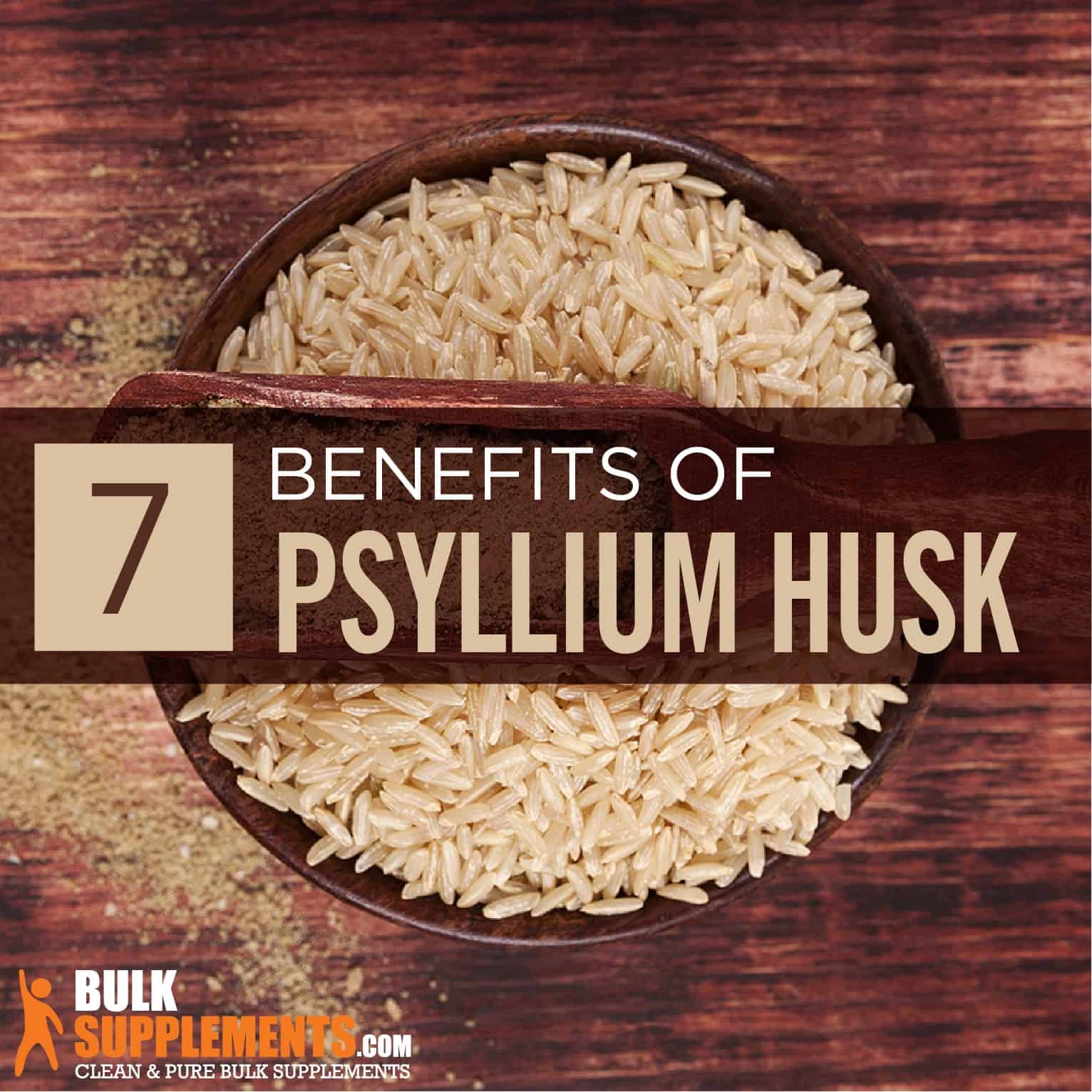 What is Psyllium Husk?

Psyllium comes from the seeds of a shrub called Plantago ovata. You can find the plant mainly in India, but it grows all over the world. (x) Psyllium husk is a soluble fiber that is sometimes called ispaghula. It is a natural, bulk-forming laxative, so it’s easy on your body. When it absorbs water, it swells and turns into a gelatin-like substance that moves waste through your digestive tract, providing water and volume to your stools. (x)

Some psyllium supplements also tend to use semi-synthetic or synthetic active ingredients like polycarbophil and methylcellulose, containing no psyllium. Keep away from psyllium powder with sweeteners or additives, as these can negatively affect the microbiome and possibly trigger side effects.

Understanding the benefits of taking psyllium husk will help you decide whether you should take it or not. Ask your physician before trying any new supplements like psyllium husk. Some benefits include:

Psyllium is a bulk-forming laxative that works by increasing the size of stool, thereby helping ease constipation. (x) (x) First, it binds to partly digested food moving to the small intestine. Then it helps it absorb water, which increases the size and moisture of stools — results in large stools that pass quickly. (x) (x) (x)

A study concluded that psyllium fiber had a more significant impact on the texture, total weight and moisture of stools than wheat bran. (x) Another study revealed that taking 5.1 gm of psyllium twice daily for 14 days notably increased the stool weight, water content and frequency among 170 people with persistent constipation. (x)

Psyllium husk eases diarrhea. It does so by absorbing water, increasing stool thickness and slowing down its movement through the large intestine. (x) (x) (x)

Many studies have shown that psyllium fiber in a healthy diet may help decrease the risk of heart disease. It can promote a healthy heart by reducing blood pressure, strengthening the heart muscle and improving lipid levels. (x)

In one study, 40 people with type II diabetes used a psyllium treatment with a controlled diet. After two months, their overall health improved significantly, including their triglyceride levels, a risk factor for cardiovascular disease. Researchers suggest that psyllium may help reduce the risk of heart disease. (x)

Obesity has tripled worldwide in the last four decades, and it causes serious health issues, including chronic heart disease and diabetes. (x) Psyllium is one of the many medicinal herbs that may significantly reduce body weight. (x)

Patients in a study consumed 10 grams of psyllium twice daily for 12 months. It boosted the production of short-chain fatty acids, including butyrate, which may improve colon and skin health. The fermentation process is typically slow, meaning there’s no gas increase or digestive discomfort along the way. (x) (x) (x) (x)

If consumed regularly, psyllium husk can be a great natural solution for irregular blood glucose levels. (x) When researchers gave people with diabetes 5.1 grams of psyllium 20 to 30 minutes before breakfast for eight weeks, they discovered that their fasting blood glucose levels decreased by 52.6 milligrams per deciliter. They also reported a 1.6 percent decrease in A1C levels. (x)

Another study found that when male type II diabetics consumed 5.1 grams of psyllium twice a day for eight weeks, their glucose levels after meals reduced by 11 percent. (x)

In teens and children with altered lipid and carbohydrate metabolism, psyllium husk intake lowered their post-meal blood glucose levels by between 12.2 and 20.2 percent. (x)

In a 2017 study, people with diabetes consumed seven grams of psyllium husk powder on a moderate-carbohydrate diet. Their insulin sensitivity increased significantly, which is good news because the more insulin the body detects, the better it can control glucose. (x)Another study in 2016 found that fasting blood glucose levels decreased by 43.6 milligrams per deciliter. In the survey, people with type II diabetes took seven grams of psyllium husk 15 minutes before their midday meal and 3.5 grams 15 minutes before supper. (x)

Side Effects of Psyllium Husk

Psyllium husk is generally safe in the correct dosage with lots of fluids. Side effects may include: (x)

Gas and severe flatulence may occur when consuming psyllium husk products. If bloating persists or becomes unbearable, talk to a physician about remedies. It may also cause diarrhea, constipation or nausea.

If you suffer other side effects not listed here, contact a physician or pharmacist.

Other Side Effects and Warnings

If you have difficulty swallowing, spastic bowels or gastrointestinal tract, you shouldn’t consume psyllium husk. The supplement may be ineffective for severe kidney disease. (x)

Psyllium husk might interfere with medication absorption. It may cause reactions with carbamazepine, digoxin, tricyclic antidepressants and bile acid sequestrants. Consult with a doctor before consuming psyllium husk products. (x)

If your bowel habits continually change or you have a health problem requiring treatment — like heart disease or diabetes — talk to a physician if you want to use psyllium. But don’t delay or forgo standard care. If you have a prescription for medicine, never stop using it before consulting a doctor first.

If you’re pregnant, speak with your doctor before including this soluble fiber in your diet. Psyllium is generally safe for pregnant and breastfeeding women in appropriate doses. (x) As with any nutritional supplement, it’s advisable to use small amounts to clock its effects.

Taking pure psyllium husk supplements in powder form a more effective way to take the fiber, and it’s better for your body.

In powder form, the recommended dosage of psyllium husk is five grams up to three times a day, unless a doctor advises otherwise. In capsule form, take three capsules twice a day. Take capsule and powder supplements with at least eight ounces of fluids to avoid choking. Avoid psyllium husk if you find it difficult to swallow.

Psyllium husk provides a healthy, natural, cost-effective alternative to expensive fiber supplements, many of which have artificial additives. Ideally, the average person needs about 25 to 30 grams of fiber every day, but many people don’t meet those requirements. (x) Taking psyllium husk every day is a simple remedy for insufficient fiber and preventive for constipation.

Where to Buy Psyllium Husk Powder?

You can purchase psyllium husk powder at BulkSupplements.com. The company is an industry-leading manufacturer and distributor of pure dietary supplements.

Are you interested in trying psyllium husk powder for your health, as described in this article? Contact BulkSupplements.com to place an order today.

The recommended amount of fiber is 25 to 30 grams a day to move bowel contents more easily. However, most people do not consume the recommended amount. Psyllium husk may help remedy the lack of fiber in your diet. It is an excellent natural remedy for people who suffer from constipation or other digestive issues.

With more special bioactive ingredients, this product is the best organic supplement on the market. Psyllium may be beneficial in maintaining blood sugar levels, weight loss, and preventing risk factors for heart disease. However, it is most effectively combined with other preventive and treatment plans.