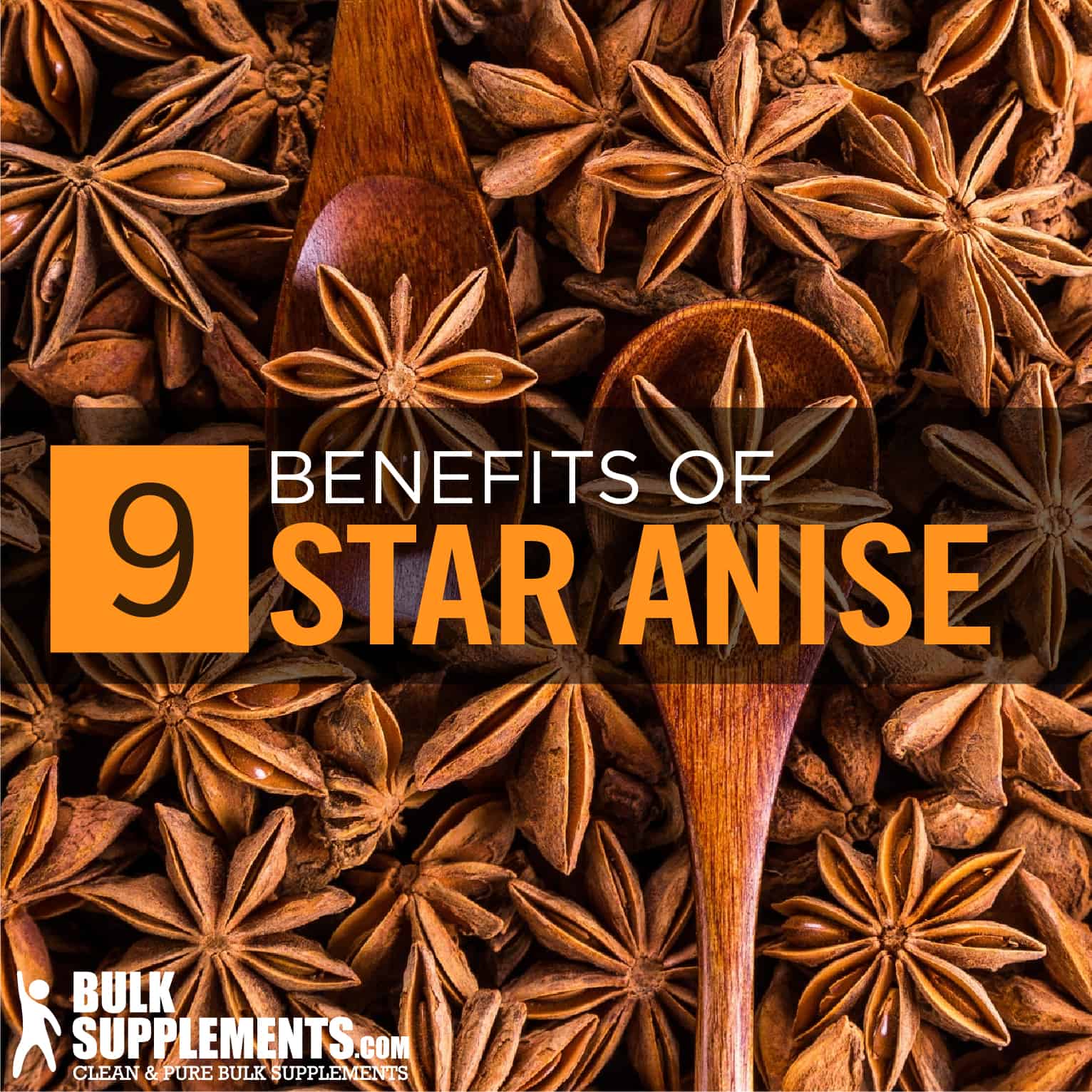 What is Star Anise Extract?

Antioxidants rank among the most beneficial substances to human health, and star anise extract has plenty of them (x). Besides offering cells protection from premature aging and cancer, star anise can help support healthy respiratory systems, treat fungal infections, improve poor digestion and promote quality sleep, among other things. It tastes a little bit like licorice (not everyone’s favorite flavor). But it’s worth cultivating a taste for it when you consider its many health benefits.

Star anise (Illicium verum) is the fruit of an evergreen tree native to China and Vietnam. It grows in star-shaped pods, as you may have guessed. Harvesters pick star anise pods before they ripen and then dry them in the sun, where they harden. The pods are red-orange in color and have a strong scent.

Though the name is similar, star anise is not related to European anise seed. While substituting one for the other may be okay for cooking, stick to star anise to reap medicinal benefits.

Cooks in Asia have used it as a spice for hundreds of years. Alongside cloves, fennel seed, Chinese cinnamon and Sichuan pepper, it’s one of the main ingredients in the popular Chinese five-spice powder. Cooks also use star anise to make other spice mixtures, such as Indian garam masala, and it also makes a tea. It also has commercial uses and is sometimes an ingredient in toothpaste, mouthwash, perfume and cosmetics (x, x).

Practitioners of traditional Chinese medicine have used star anise in their treatments for many years. In fact, it has treated many ailments, including colic, fluid retention and digestive issues, to name a few. Modern research has investigated its chemical makeup and found multiple chemical compounds in it that offer medicinal benefits.

One such compound is the natural alcohol linalool. Linalool is an antioxidant that has anti-inflammatory and antimicrobial benefits (x). Another is anethole, also found in anise seed, fennel and many other plants. The subject of recent biochemical research, anethole may help the body fight cancer and inflammation and may offer protective effects to the brain (x). Star anise also contains essential vitamins and minerals, such as vitamins A, B and C, and minerals iron, calcium and phosphorus.

Star anise also has antifungal and antibacterial properties, supports heart health and balances blood sugar levels. But perhaps its most important medicinal component is the lesser-known compound shikimic acid. Shikimic acid is an ingredient in Tamiflu, a medication used to treat influenza, and has helped treat swine flu (x).

Star anise can be found as a whole seed pod, a powder and an essential oil. Using only the Chinese star anise is important — the Japanese star anise has raised concerns regarding toxicity (x).

Every day, our bodies battle cell-damaging free radicals. These are uncharged molecules that will damage cells, proteins and DNA to find electrons to pair with. Free radicals can cause serious illness and premature aging, but antioxidants fight this damage by giving them free electrons without destabilizing. Star anise extract is a great source of the antioxidants vitamin C and linalool. Studies have shown that it can inhibit the development of cancer (x). More research is needed, but early results are promising.

Heart disease is the number-one killer of men and women, and it’s responsible for about 25 percent of all deaths, over 600,000, in the U.S. each year. Because star anise is chock full of antioxidants, it can help reduce oxidative stress in the heart, promoting a healthier cardiovascular system.

Research has shown that star anise extract helps regulate weight, blood pressure and fat levels in the bloodstream and prevents plaque buildup in arteries. Research has also shown that it reduces multiple inflammation markers in the hearts of mice (x). Although more studies are needed, it shows promise as a natural protector against serious cardiovascular illnesses such as stroke and heart disease.

In recent years, bacteria have proven more resistant to prescription antibiotics. In response, scientists are on the lookout for new antimicrobial treatments, and many have turned to the plant world to find solutions. Researchers have found multiple compounds in star anise that are effective against almost 70 different types of drug-resistant bacteria (x). It shows promise as a future antibiotic.

Star anise essential oil can effectively treat rheumatism and painful joints, including back pain. Note that mixing it with a carrier oil before application is important.

Star anise tea is popular in China and other Asian countries to treat digestive upsets, including indigestion, bloating, stomach cramps and constipation.

Most, if not all women around the world, experience menstrual pain, which can be mild to severe. It can make life miserable and prevent you from engaging in everyday activities. However, star anise’s antispasmodic and pain-relieving properties can help. Studies have shown that a blend of star anise, saffron and celery seed can reduce the pain, discomfort and duration of menstrual cramps (x).

Many have used star anise to settle nerves at the end of the day. Anecdotal evidence suggests it may have a mild sedative effect, which can help you get a better night’s sleep (x).

Star anise is an effective natural remedy to soothe coughs and sore throats. It may also relieve bronchitis and even asthma (x).

Take only Chinese star anise. Japanese star anise can cause nausea, vomiting, seizures, restlessness and rapid eye movement. If you experience any of these side effects, discontinue use and see your doctor.

Some products may be contaminated with Japanese star anise. For this reason, you shouldn’t give star anise to children or infants. If you experience side effects or food-allergy symptoms, discontinue use and see your doctor.

Research has yet to determine the effects of these supplements on pregnant or nursing women. If you’re pregnant, nursing or planning a pregnancy, talk to your doctor before taking it.

Birth control containing estrogen may react with star anise, causing it to be less effective. High doses may also decrease the effectiveness of estrogen medications, including Premarin and ethinyl estradiol, among others.

Certain cancers react to estrogen. Don’t take star anise if you have breast, ovarian or uterine cancer. It may reduce the effectiveness of Tamoxifen, a cancer-treatment drug. Avoid it if you’re taking Tamoxifen (x).

Talk to your doctor before taking star anise extract to determine the correct daily dose for you. In general, three 500-milligram daily doses is typical for adults.

Star anise extract offers many health benefits. It’s an antioxidant that supports healthy digestion, a healthy heart and much more. Added to a diet, it can offer a boost to your overall health and wellness.