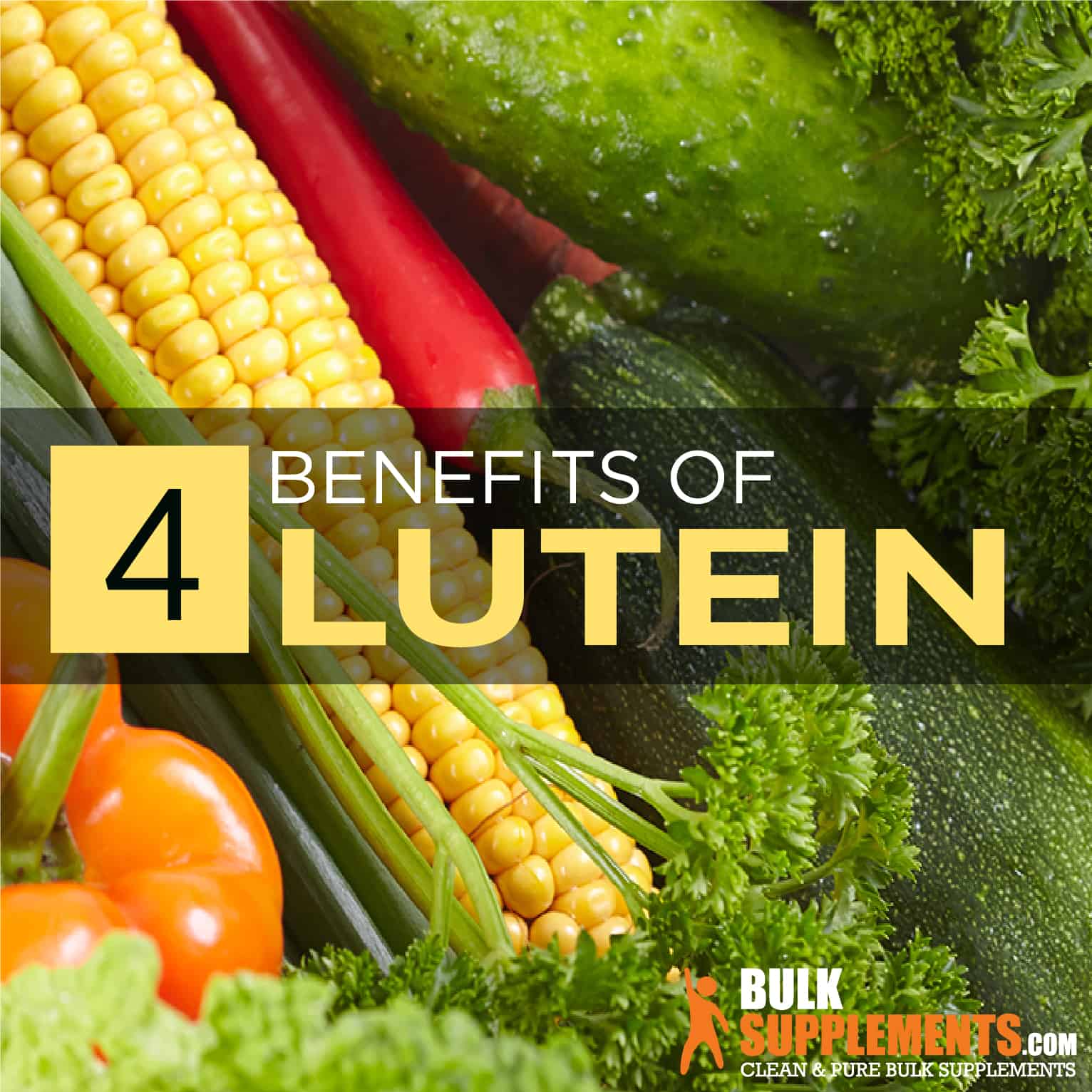 Your vision is extremely important. As we get older, eyesight is one of those health problems that can sneak up on us when we least expect it. Besides going to the doctor and getting your eyes checked regularly, there are natural remedies out there that can help to promote eye health. One of these is lutein.

Lutein is a nutrient that can be beneficial not only to the eyes, but also to the skin and heart. It’s a natural substance that is present in many foods, especially dark leafy greens, fruits and eggs. You can reap its benefits simply by sticking to a lutein-rich diet (x).

The nutrient lutein is a carotenoid, and if you look for it regularly, you might come across its closely related relative, zeaxanthin, too. Both of these nutrients are important for vision, and actually make up the back of our eye. The back of our eye is what’s responsible for vision, so it’s no wonder that good health here can improve it (x). Carotenoids like lutein and zeaxanthin help maintain the retina (x).

Recently, researchers have been interested in the value of dietary lutein for our overall health, especially vision. Besides the eye, it turns out that this special nutrient may also help promote heart health and even fight cancer. Scientists who measured the levels of lutein circulating in blood found that it can help us neutralize toxins and free radicals, all of which can be harmful to our bodies (x).

Lutein and Zeaxanthin: What’s the Difference?

We know that lutein and zeaxanthin are closely related to each other, but what’s the difference between them? They are both carotenoids, which are a type of organic molecule related to vitamin A (x). In terms of their chemical makeup, they are extremely similar, but not entirely identical. Lutein and zeaxanthin are part of a group of carotenoids called xanthophylls. This kind of molecule has an oxygen atom in their chemical structure (x). Lutein and zeaxanthin are both present inside our eyes; however, they differ in location within the eye. Towards the center of the retina, we mostly find zeaxanthin. But as we move further away from the center towards the edge of the retina, we find more lutein (x).

Lutein in Our Food

You can find lutein in the food we eat, whether or not you are purposely trying to supplement it into your diet. Many believe that if you want to get more lutein in your diet, it is best to eat leafy greens. This was supposed to be especially true for the darker green likes spinach and kale (x). Therefore, various studies have been conducted to measure lutein levels present in foods like spinach, eggs and even potatoes.

Recently, scientists measured levels of lutein in various foods. Though the research group did find spinach to have high levels of it, they found that, contrary to common belief, other dark, leafy green vegetables had only moderate levels of lutein compared to egg yolk.

In the family of fruits and vegetables, the highest lutein containing food they found was corn (x). A number of related foods to corn, such as durum (a kind of pasta wheat), and einkorn (an ancient wheat), are also lutein-rich (x). These types of foods, that we can consume through baked goods or other cooked products, are great ways of incorporating lutein into our diet. Closely following behind corn and wheat were kiwi, grapes and zucchini (x). Additionally, corn and egg yolk also had higher levels of zeaxanthin. Other leafy greens had almost no zeaxanthin content (x). Perhaps we should turn our attention on recipes incorporating egg or corn to supplement our diets with lutein.

Being a natural component to the human eye and essential to the health of our vision, taking lutein as a supplement can help us maintain healthy eyesight. In fact, lutein has been an agent for eye health for a long time. However, researchers have been unable to provide consistent scientific data to support any claims. The limited data that does exist suggests that lutein is a beneficial supplement for people who have macular degeneration, which is a leading cause of blindness in the world (x). Other studies suggest both lutein and zeaxanthin are important for preventing this disorder, and in reducing the more common problem of cataracts (x, x). Recent research in Finland also discovered that people with high levels of lutein in their blood had a lower rate of getting cataracts (x, x).

Consistent with these early claims, other researchers also report lower rates of cataracts not only in people with measurably high lutein in the blood, but also people simply following a lutein-rich diet or supplementation regimen (x, x). People already suffering from cataracts also seemed to benefit from lutein supplementation. Their vision improved after taking it for two years (x, x). However, because we are lacking in any large, randomized clinical trials about its vision benefits, we don’t have enough concrete evidence to make any scientifically proven recommendations.

Though we love to enjoy the long days and warm weather of the summertime, the sunshine brings harmful ultraviolet rays that can damage our skin. Not only does UV light age us, but it can also even kill us. Harmful UV rays are the culprit behind skin cancer, which is often treatable, though sometimes fatal.

Recently, scientists have considered the protective effects of lutein against UV radiation, especially in our skin (x). One study found that it was able to block some of the damaging effects of both UVA and UVB (x). It’s also possible that it can help block the skin from harmful, high-energy radiation. One randomized, double-blind clinical trial found that after a 12-week supplementation with lutein, people had noticeably improved skin tone, including elasticity and coloration (x). The same study proposed that lutein could be a safe and effective option to help people with various skin conditions, including melasma acne scarring, freckles and age spots (x).

Heart disease is a leading cause of death. Cardiovascular disease is the result of years of chronic inflammation damaging the blood vessel walls in our body (x). These injuries promote clotting and narrowing of our blood vessels, limiting the ability of our circulation to feed our heart. Nutrients like lutein that can fight free radicals and toxins might help us prevent this inflammatory damage. Studies in humans show that lutein supplementation can lower inflammation that may harm our heart. Other factors that influence heart diseases, such as cholesterol levels, fat metabolism and markers of insulin resistance, may also see a reduction thanks to lutein supplementation (x).

In one study, patients with atherosclerosis taking lutein had lower levels of bad cholesterol and fat in the blood. These same patients also had better test measures of their carotid arteries, showing less narrowing of the main vessels bringing blood to the brain (x). Recently, a study also showed that it may help with slowing down damage related to the aging process and could be a predictor of heart attack risk (x). However, most of our knowledge about lutein for heart disease comes from observation studies. There will need to be randomized clinical trials to improve the scientific knowledge behind these claims.

Besides protecting our eyes, heart and skin, lutein’s antioxidant properties may also be good for our lungs. Some scientists believe in the protective effect of lutein, especially against lung damage due to cigarette smoke (x). In one mouse study, it even demonstrated protective effects against lung and liver damage caused by chemotherapy (x). Lutein’s antioxidant effects have also demonstrated potential anti-cancer activity in laboratory experiments, especially in breast and lung cancer cells (x, x, x).

Though reports of side effects are rare, some people have noticed they get a headache when taking this supplement (x). However, this has only happened to people who have taken more than the recommended dose. There are no known side effects when people follow the suggested serving size (x). Currently, not enough research is available to detect any long-term risks of lutein supplementation (x).

You can get lutein into your diet by eating more foods rich in this nutrient. However, an easier way to monitor your intake is to take a supplement. Lutein supplements have been used for a long time, especially for people who have macular degeneration or have a family history of this disease (x). Some multivitamins may already have a component of lutein and zeaxanthin in them.

Currently, there aren’t any recommendations for what level of lutein is safe or effective. Generally, a normal adult should be getting approximately 5 mg each day based on a healthy diet rich in fruits and vegetables (x). As a supplement, you can start with a daily dosage of 100 to 400 mg (x).

Lutein is a nutrient naturally found in our eye and is important to our health. It has both antioxidant anti-inflammatory properties, giving us a protective benefit against eye diseases, skin cancer and cardiovascular disease. Lutein can also be found naturally enriched in certain foods, especially in egg yolk, corn and certain leafy greens. It is also present in fruits. You can choose to eat a lutein-rich diet by eating specific fruits and veggies that naturally contain the compound. You can also choose to use a supplement.

There is little evidence behind using lutein, so there are no established guidelines or dosing regimens. However, it is generally considered safe, as there have been no side effects reported by its use. There also isn’t enough evidence to know whether there are any long-term side effects of lutein supplementation. Whenever you are trying a new homeopathic therapy, always consult with your doctor for further advice.