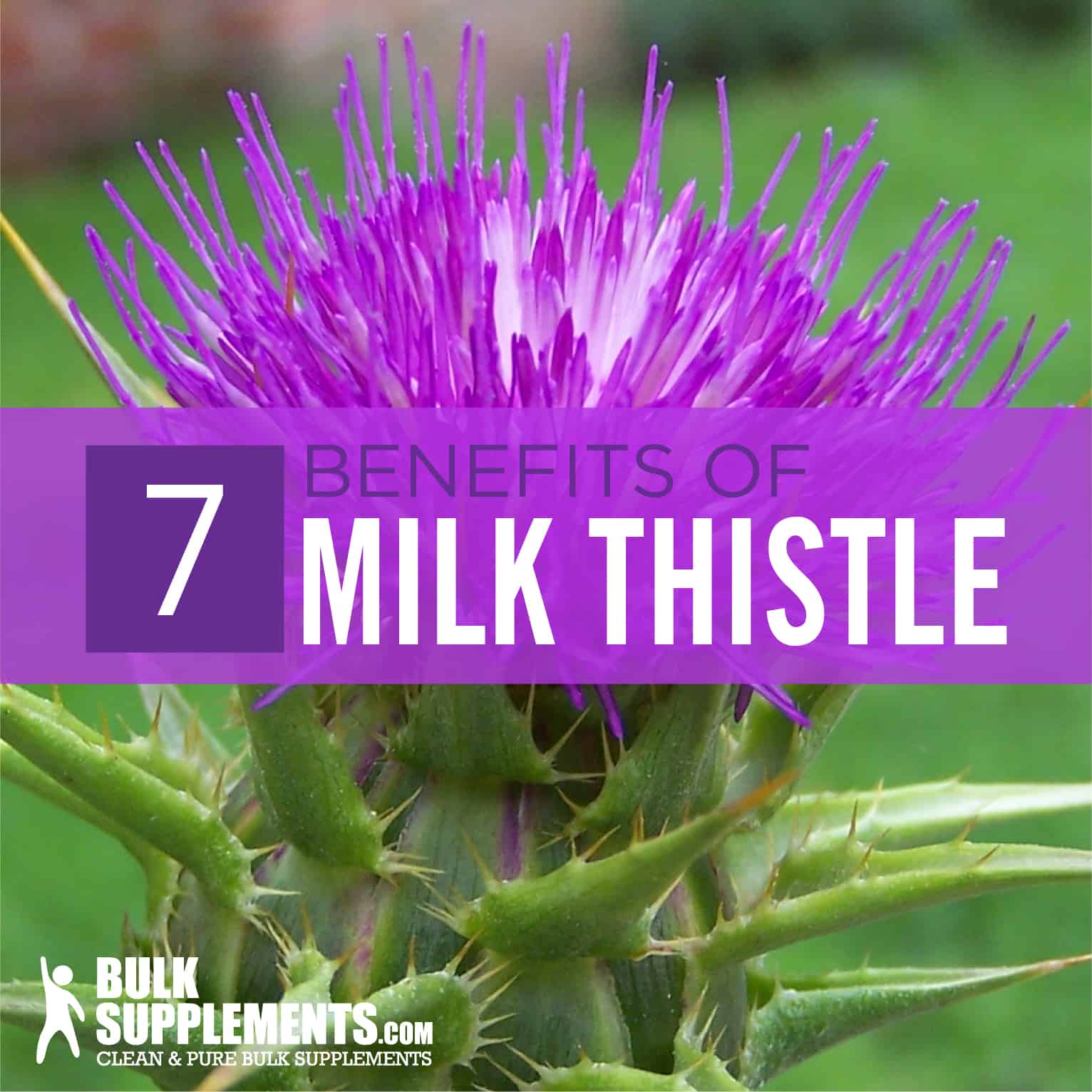 What is Milk Thistle?

Milk thistle, native to Europe, now grows in many areas worldwide. It’s decorated with a single purple flower and glossy, white veined leaves. It’s name derives from the milk-like liquid that oozes out of it when crushed. Used widely in alternative and herbal medicine, milk thistle, or Silybum marianum, belongs to the Asteracae family of flowering plants. A relative of the dandelion and the daisy, some refer to it as “wild artichoke.”

Milk thistle roots and shoots can be boiled and eaten, and the spiny flower heads can be consumed just like you’d eat an artichoke. Trimmed of its spines, it can be eaten raw or cooked like spinach. Its roots can be roasted, ground and used as a coffee substitute. Milk thistle is so prevalent that its considered an invasive species in many areas.

Milk thistle has a long and useful history. For over 2,000 years, its healing properties have been admired. Dioscorides, a Greek doctor, first described it back in 40 A.D. His written record included milk thistle as a remedy for snakebite. It was also a common remedy in the Middle Ages for various liver problems.

In the 16th century, John Gerard wrote about its benefits for depression and emotional problems. Years later, a famous herbalist and doctor named Nicolas Culpeper mentioned milk thistle as an aid for “unblocking” the liver and curing jaundice. It has been a long-time remedy for liver and gallbladder dysfunction and was also employed to combat snake or mushroom poisoning and alcohol abuse symptoms. Milk thistle can even ward off varicose veins, menstruation problems, kidney and spleen conditions (x).

What Can Milk Thistle Do?

What does this uber-abundant, edible weed offer to us in modern times? Turns out that milk thistle has unique properties that are still in use today — and the list of possibilities is growing (x).

In the United States, it is one of the most beloved herbal supplements. It’s used all over the world and its largest producer is Germany. The German Scientific Board endorses milk thistle use for liver problems such as inflammation, cirrhosis and damage due to toxins (x).

Many parts of this helpful plant have benefits. But creating an extract from the seeds produces an antioxidant-rich herbal remedy. Inside the extract lies one of milk thistle’s primary active ingredients — silymarin.

Silymarin, found within the seeds, contains active agents that become concentrated in milk thistle extract (x). Some research has concluded that the silymarin may:

There are some challenging issues with silymarin, however. Silymarin is composed of three main elements — silybin, silidianin and silychristine. Silybin is the most active component, but it manifests poor solubility in water, which inhibits its effectiveness. Stomach acid can also depress its active ingredients, making it unusable in the gut.

Researchers are exploring ways to give silybin a longer, more useful lifespan (x). Combining silybin with other flavonoids, fats or proteins may increase its absorption rate (x). Taking silybin in combination with berberine or vitamin E may enhance its power as well. Trials are ongoing to maximize the potential of the silybin — that lies within the silymarin — that is present within the milk thistle extract.

Milk thistle extract has a long list of benefits for its users. Some applications are proven, while others are just now being studied with hopeful possibilities.

One of the most popular and most researched uses for milk thistle extract is its benefit to the liver. An analysis of 17 scientific trials confirmed that silymarin can reduce liver enzymes ALT and AST, which are common indications of damage to the liver (x). Milk thistle can also promote glutathione levels and boost the regeneration of liver tissue (x). But that’s not all it can do for the liver.

In a recent clinical trial, the active milk thistle compound silybin, together with vitamin E and another supplement, improved fatty liver disease in 179 individuals. These included hepatitis patients, who also experienced benefits.

Research conducted on more than a thousand patients affirmed that those who took milk thistle are less likely to die of liver-related conditions (x). In one study, silybin protected the body from the HIV virus and reduced its cell division and activity. It also reduced inflammation and other actions that spread HIV throughout the body (x).

One study observed that a silymarin extract given over eleven months lowered damage in patients with alcoholic liver disease (x).

Toxin and Poison Protection for the Liver

Milk thistle seems to protect the liver from damaging drugs and toxins. In one study, it protected children diagnosed with leukemia after one month of use (x).

In a recent lab study, milk thistle protected subjects from damage by toxins or drugs such as alcohol, chemotherapy drugs, acetaminophen, radiation and other poisons. However, it curiously seems to be ineffective against tuberculosis drug damage, as discovered by one study. In this study, it seemed to slightly increase the risk of liver problems (x).

Worldwide, the most mushroom poisonings that result in liver damage are the “death cap” mushroom’s doing. Milk thistle is arguably the top remedy for death cap ingestion (via injection). Given within 48 hours, it can increase survival and prevent life-threatening liver damage (x).

What can milk thistle offer for diabetes treatment? How about improved blood sugar levels with better cholesterol levels as a bonus?

In a recent research trial in Iran, 51 middle aged diabetics were studied. Researchers gave half of these patients milk thistle extract while the other half used placebos. At the beginning, patients had similar blood sugar control and levels. After four months, though, the group given milk thistle extract showed better blood sugar control as well as improved cholesterol and triglyceride levels. Researchers are still studying the reasons why it plays such a beneficial role (x).

Milk thistle has anti-inflammatory properties and blocks triggers for inflammation. In lab studies, it reduced brain inflammation and lowered inflammatory elements in subjects with infections (x). It has also reduced inflammation in healthy individuals by blocking the release of harmful elements (x).

Milk thistle has traditionally been used by nursing mothers as a supplement to improve milk supply. Some supplements are not safe to use while breastfeeding, but that does not appear to be the case for milk thistle (x).

Milk thistle, even if used daily, seems to be harmless for many. It comes in the form of an oral capsule, tablet, tincture, powder, liquid extract or IV solution. Doses are usually divided into three parts, spread out throughout the day. Taking it with fat or oil may increase its effectiveness. Dosage of milk thistle extract varies according to the health condition and should be given under the advice of a health professional.

If side effects do happen, the most common ones are nausea, bloating or stomach discomfort. Others may include headaches, mild diarrhea, joint pain, skin allergies, rash, loss of appetite, nasal congestion and insomnia (x). This is not an exhaustive list, and other side effects may surface. Contact a health professional for more information about side effects.

Always use caution and talk to your doctor before taking milk thistle extract since it may interfere with some pharmaceuticals, including:

Milk thistle is a common, prolific herb that grows worldwide. Looking at its protruding spines, you may think its saying, “hands off.” But across generations, people have been enjoying the benefits of this common herb. For food or for illness, the gentle and powerful milk thistle extract invites us to make use of its many talents. The active antioxidant silymarin is its main power secret. Especially kind to the liver, it can also target other areas of the body. From bones to breastmilk, from diabetes to cancer, milk thistle extract is a proven and promising answer for many health concerns.