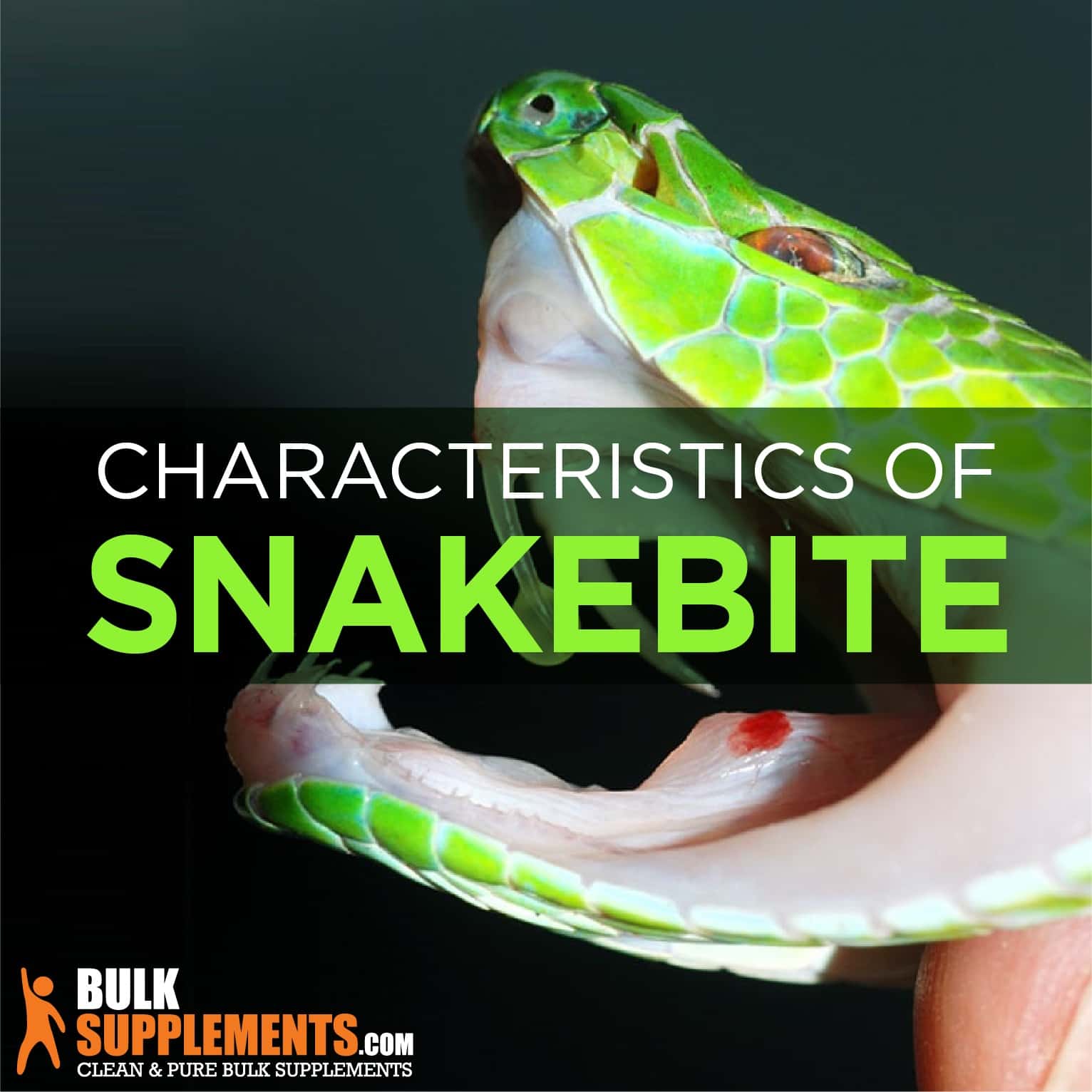 The odds of getting bitten by a snake are unlikely unless you’re an avid hiker or live in a region where snakes are prevalent. Based on the Center for Disease Control and Prevention information, around 7,000 to 8,000 people in the United States suffer from a snakebite every year, out of which about five people die. The estimated death rates are higher if you don’t seek medical emergency care after a bite. (x)

The World Health Organization regarded snake bite as one of the top 20 tropical diseases neglected globally, joining the class of leprosy, rabies, dengue fever, and other diseases. (x)

What is a Snakebite?

A snake bite occurs when a snake uses its salivary glands to inject venom into your body. The poison starts passing from the snake’s venomous gland through the duct and then into the fangs, which bite you or its prey. Not all bites inject poison, as the snake can regulate when to release venom and in what amount. A dry bite is when the snake injects no venom. Close to 25 to 50 percent of these bites are not toxic.

Snakebites are pretty common in rural, agricultural and tropical regions. In these areas, many people have experienced multiple snakebites, and only a few deaths occur each year.

Types of Venomous Snakes in the United States

There are four types of venomous snakes prevalent in the U.S. — copperheads, rattlesnakes, coral snakes and cottonmouths.

The rattlesnake is the largest snake found in the United States. Attacks or bites are increasing in number. Usually, the bites occur the most between April and October. The good thing about rattlesnakes is that they alert you before striking you. If you notice a hiss or a rattle, you may well be in the territory of a rattlesnake. (x)

There are almost 29 different species of this type of snake found in the country, from the meadows to the mountains and in the swamps. These snakes can live at elevated levels as high as 11,000 meters. Rattlesnakes live primarily in New Mexico, California and Arizona. (x)

Most of the time, a rattlesnake only bites when you accidentally step on one. It is important to watch where you walk, especially when you are out exercising. It’s better to keep headphones off so you can stay alert when you hear them hiss or rattle.

‘Copperhead’ is a term given because of their copper-colored redhead. These snakes have a light tan or salmon-colored skin with criss crossed dark markings similar to a dumbbell or an hourglass. (x)

Similar to the rattlesnake, copperheads also shake their tail before striking. But since they do not have a “rattle,” it is harder to know. Copperheads release a strong smell when triggered. During the summer, these snakes become almost nocturnal. In spring, though, they spend the day out basking in the sun, looking for prey.

Copperheads bite people more than any other species of snake in the United States. Fortunately, copperhead venom is the mildest, though it still requires medical attention in an emergency. These snakes stand their ground, so if you encounter one, calmly back away and do not intimidate it. (x)

Water moccasins (or cottonmouths) are at home both offshore and onshore. You can find these snakes most commonly in the southeastern part of the United States. Cottonmouth snakes love lakes, streams, marshes, swamps and freshwater ponds.

Cottonmouth snakes spend their time offshore to soak up the warmth of the sun. They hang out on logs, stones and even hanging down from trees for this purpose. These snakes swim close to the top of the water and usually hunt in the dark. (x)

The venom in cottonmouth snakes is particularly deadly because it prevents the blood from clotting, resulting in the hemorrhaging of the circulatory system. (x)

Seek medical treatment immediately if one bites you.

Coral snakes are colorful and small in size. These snakes have the most potent and most deadly venom of snakes in the United States. They are second to the black mamba, regarded as one of the most poisonous and most fatal venomous snakes on the planet. Coral snakes are about 18 to 20 inches long in size, with a slender and pencil-like structure. (x)

The venom of this snake is a neurotoxin, which can cause cardiac failure, respiratory failure and even paralysis. Because of their bright color and small size, these snakes appeal to young children. It would be best if you taught your child to never go near a snake without the supervision of an adult. (x)

The symptoms of snakebites depend on the type of snake that bit you, whether the venom is deadly and also on the physical health of the victim. It is similar to a bee sting. In some people, it is not an issue and tends to heal on its own. For others, it can be more extreme. It’s generally the case in North America. However, suppose you are overseas or traveling in areas where venomous snakes are more common. In that case, seek medical attention if a snake bites you, regardless of whether you feel an immediate effect. The characteristics for each poisonous snake are different:

The venom of this snake contains neurotoxins that can attack your nervous system. Some common symptoms of this bite can be low blood pressure, thirst, blurred vision, drooping eyelids, severe pain in the body, fatigue, muscle weakness, difficulty breathing, respiratory failure and difficulty speaking.

Vomiting blood, chest pain and feeling a metallic taste are also other symptoms. If treated on time, the fatality rate can be very low, and the symptoms can change rapidly — so handle it right away. (x)

Common symptoms of a snakebite of this type include changes in skin color, low blood pressure, weakness, severe and immediate pain.

The symptoms of a snakebite from a coral snake delays sometimes for almost 18 hours. For this reason, it is vital to seek medical attention. The neurotoxins present in the venom can cause difficulty breathing, muscle weakness, stomach pain, twitching of the tongue, sudden shock, blurred vision, paralysis, respiratory failure, headache, abnormal mental state, inability to move eyelids and convulsions. (x)

Several situational risk factors increase the likelihood of a snakebite. People with occupations like construction workers, landscapers, roofers, mechanics, painters, groundskeepers and farmers are all at risk of encountering snakes. (x)

Hikers and bikers who don’t stay aware of their surroundings are also at risk. Walking through floodwaters after a natural calamity is dangerous as snakes often seek refuge inside garages and homes to avoid rising waters in these circumstances.

Snakebites are generally avoidable. Look where you are going and don’t take risks in hot weather or high-risk times of the year. Educate your children and yourself.

It is vital to point out that these are not medical treatments. Seek immediate medical assistance for antivenom and treatment of a snakebite. Failure to do so can cause death. Once you have received medical attention, you can supplement your healing process with these natural remedies. Some of these include:

It is essential to clean the affected area after a bite using an antibacterial containing tea tree oil. After cleaning properly and applying an antibacterial ointment, wrap with a clean bandage. Make sure not to wrap too tightly as you do not want to increase the blood flow. Sometimes healthcare professionals instruct not to cleanse the affected area, depending on the bite. (x)

Coconut oil fights off bacteria, viruses and parasites. It also assists in wound healing. Apply a small amount of coconut oil onto the affected area topically and wrap it with a bandage for a speedy recovery. According to a study published in the Journal of Pharmacology and Physiology, when you apply coconut oil topically, wounds heal more rapidly than the other groups involved in the study. (x)

The onset of anxiety and stress is pretty common after a snakebite. It is imperative to stay calm after one gets bitten by a snake as the increase in heart rate due to stress and panic can make the toxins spread in the body rapidly. To ease the anxiety, use a few drops of lavender oil topically behind the ears or just sniff from a bottle for instant mental relief.

Echinacea is an excellent anti-inflammatory painkiller that gives the immune system a boost. It is suitable for fighting off infections and recovery of a wound. It boosts the immune system by reducing the regulatory T cell numbers and their functioning. However, before taking echinacea supplements, consult with your doctor. If your physician already prescribed medications for a snakebite, the two can interact and cause a reaction. Follow the given guidelines and make sure to purchase only high-quality supplements. (x) Take 450 mg a day or as directed by your doctor.

After a snakebite, the skin absorbs toxins, and it is normal to feel pain, inflammation and other side effects for the next few days, weeks and even months. Adding turmeric to your diet as supplements can reduce inflammation and help ease the pain to a great extent. Suppose your bite was from a venomous snake. In that case, it is better to consult with your doctor as a venomous bite can affect the coagulation of the blood significantly, which can lead to various other complications. (x) You can add turmeric to your diet as a supplement in a variety of ways. Take up to 1,000 mg once a day.

Where to Buy Supplements for a Snakebite?

You can purchase these supplements for a snakebite at BulkSupplements.com. The company is an industry-leading manufacturer and distributor of pure dietary supplements.

BulkSupplements.com is not just a consumer brand. It also supplies pure ingredients to other food and supplement brands to make their products. In addition, all products at BulkSupplements.com are manufactured and tested according to current and proper manufacturing practices.

Are you interested in trying any of these supplements mentioned in this article as a possible solution to helping you with the healing process of your snakebite? Contact BulkSupplements.com to place an order today.

A bite from a venomous or non-venomous snake can cause persistent health issues and even turn out to be fatal. It is vitally important to seek medical treatment immediately to avoid any complications.

If a snake bites you, take action:

Snakebites are likely to occur when you enter a snake’s home territory, and they feel under attack. They are more likely to bite you if you happen to step on them or cause any kind of disturbance.

Be aware of your surroundings when hiking or working in an area that could have poisonous snakes. Be smart and consider bringing a snake bite kit just in case.

The four most common types of snakebites in the U.S. include copperheads, rattlesnakes, water moccasins and coral snakes. The snakebite treatment depends on the kind of snake that bites and the sort of venom it contains.

When bitten by a snake, it is crucial to remain calm and seek medical treatment immediately. Natural remedies can help in managing the symptoms after a snakebite and aid in healing the wound. However, medication is also necessary depending on the type of snakebite.