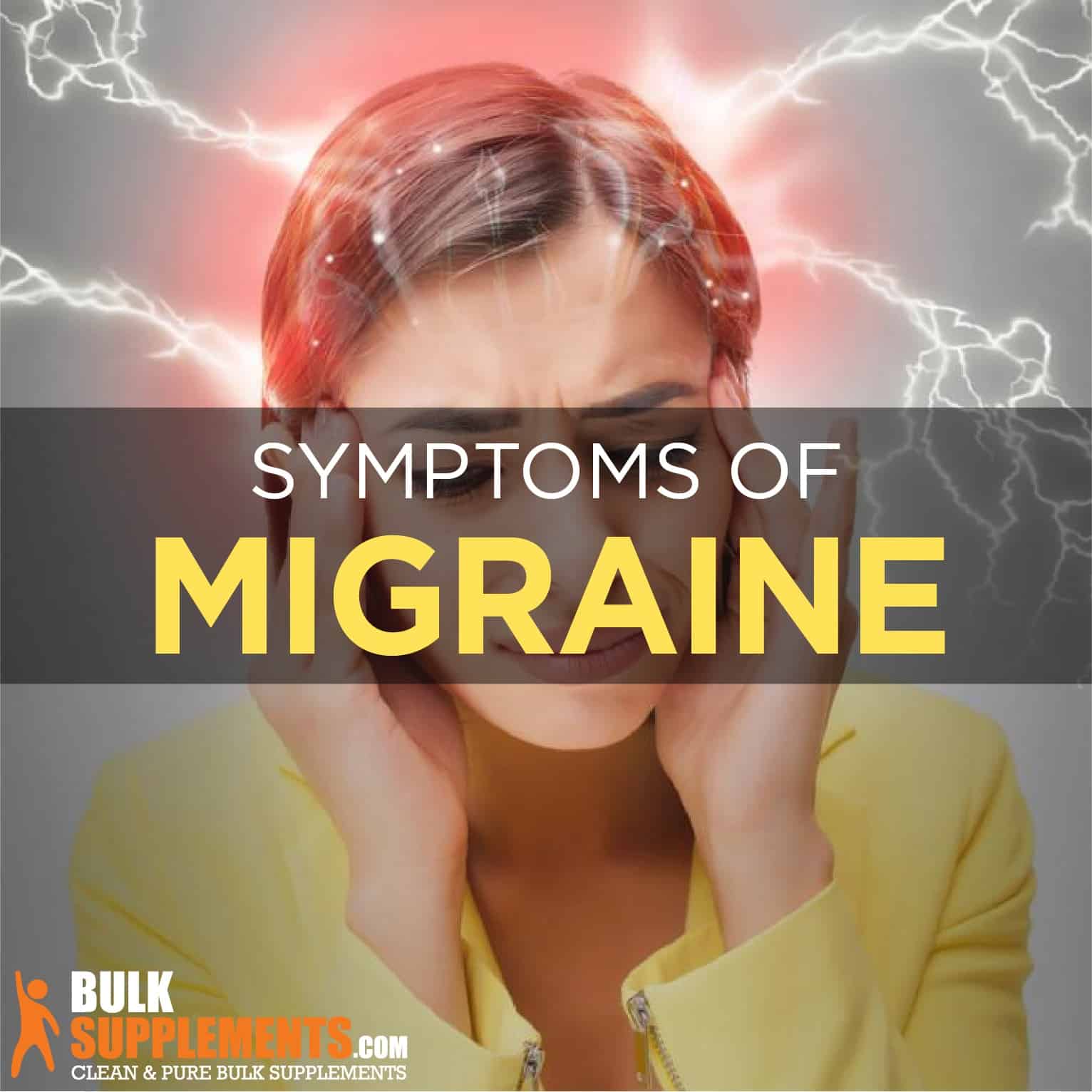 What is a Migraine?

A migraine is not a typical headache. It can come with an excruciating pain, sensitivity to light and sound, debilitating nausea and even temporary loss of sight. The symptoms of a migraine can be so intense that they can confine a person to bed or require hospitalization. Migraine has become the third-most prevalent condition in the world, affecting one billion people worldwide. Every one out of four households has someone that suffers from this recurring condition (x).

The American Migraine Foundation defines “migraine” as a specific type of headache that’s occurred 5 or more times in a person’s lifetime. These headaches last 4-72 hours and are severe enough to interfere with, prohibit or restrict daily activity. They’re usually accompanied by sensitivity to light and sound and bring on nausea (x).

Even though migraines occur less often compared to other types of headaches, they are still a major problem for millions of people. Figures show that about 12 percent of people in the U.S. suffer from migraines, with women being two to three times more likely than men to experience them (x).

What triggers migraines and how someone experiences them differ from person to person. However, many common triggers and risk factors have been identified. Several types of treatment options exist, ranging from rest and fluids to prescription medication. Natural remedies can also help prevent the onset, prevalence and severity of migraines.

Four phases of migraines have been identified, which generally occur in sequential order — prodrome, aura, headache and postdrome. Different symptomes accompany each phase. However, not everyone experiences all of the migraine phases or all of the symptoms associated with each phase. In other words, one person’s migraine can be very different from another person’s (x).

The prodrome phase may occur about 24 hours before the actual headache. Signs and symptoms include:

The aura phase is experienced by 20-25 percent of migraine sufferers and can bring on temporary visual, auditory and sensory changes that can feel scary or unsettling (x). These include:

During the headache phase, the following symptoms can appear:

Finally, the postdrome phase can cause symptoms that linger up to 24 hours that include:

People also may experience temporary changes in cognitive ability, which is yet another disruptive symptom that can interfere with productivity (x).

There are many factors that can bring on a migraine and they’re not all yet fully understood. Researchers currently believe that most likely, the activity of sensitive or excitable brain cells reduces blood flow to the brain. A reaction to a change in brain chemistry seems to be the underlying cause. But what triggers the changes in the brain that cause cell excitability? The list is long and varies from person to person (x). Migraines also appear to have a genetic component (x).

Women of childbearing age are far more likely to experience migraines because of the role that fluctuating estrogen levels play in the onset of the headaches. Migraines related to hormonal shifts can occur occasionally or on a regular basis that coincide with the menstrual cycle (x).

Serotonin, a neurotransmitter found in and around the brain, plays a large role in the activity of brain cells. Transient or chronic imbalances in serotonin likely play a role in the onset of migraines (x). Many things can affect serotonin levels.

Histamine, a chemical compound that acts as a neurotransmitter in the body and is also found in many foods, can also play a role in the onset of migraine in some people (x).

While neurological shifts that happen in the brain are ultimately what appear to cause migraines, certain things are more likely to set them off. Triggers include (x, x, x):

Managing migraines includes treating symptoms as well as trying to prevent them in the first place. If you’re suffering from chronic migraines but can’t identify the cause, keeping a journal of activity, food and symptoms can help hone in on what triggers them.

While medication might be unavoidable in some cases, there are ways to help prevent and treat migraines naturally. Often, a combination of approaches works best. Again, what works for one person will be different from what works for another.

Migraine symptoms of pain and inflammation are usually treated by over-the-counter pain medications like NSAIDS or a combination of acetaminophen, caffeine and aspirin (x). Triptans (medications that act on the brain’s serotonin), lidocaine and nasal sprays could also be used (x). Secondary symptoms like nausea can be treated with antiemetics.

In 2018 the U.S. FDA approved the first drug to help prevent the occurrence of some migraines in people who experience them several times per month. The drug erenumab (Aimovig) requires a once-a-month injection and may produce less side effects than previous drugs that aimed to do the same thing (x).

Diet can make a big difference for migraine sufferers. This is because certain foods contain a lot of histamine or contribute to its activity in the body. Histamine is a compound that has many functions, one of which is acting on the brain as a neurotransmitter. The link between histamine and migraines is well established and certain foods are known to be common migraine triggers for some people (x, x, x). These foods include:

Placing a warm or cold compress on the neck and head area can help reduce the pain and soothe a migraine. Majority of people with a migraine prefer using a cold compress, but both do work. However, the use of compresses can have some side effects, especially for people with diabetes, circulatory issues or skin disorders (x).

If your migraines are triggered by prolonged exposure to artificial light emitted from electronic devices like TV or a smartphone, then limiting the usage of such devices or wearing light-blocking glasses can help. Sometimes a migraine is also triggered from sunlight. In such cases, wearing sunglasses that are specially tinted to block UV rays from reaching the eyes may prevent its onset.

Ginger has well-known anti-nausea properties which is often much needed during a migraine attack. Research shows it can also reduce the severity and duration of a migraine (x, x). Ginger root extract can be taken once daily in a dose of up to 1,000 mg with a large glass of water.

Studies also link headaches and migraines to a deficiency of magnesium. Research shows that taking magnesium supplements can help prevent a migraine and reduce its severity (x). Magnesium supplements come in many forms including magnesium oxide, magnesium citrate, and magnesium gluconate. You can find a comparison of the forms here. Since different forms of the supplement contain varying amounts of elemental magnesium, it’s important to refer to the label for specific dosage instructions.

Studies show that melatonin can improve sleep quality which can help reduce the symptoms of a migraine (x). You can take melatonin by getting a prescription from your doctor (in some places this is required) or if available as a supplement. It is suggested that melatonin be taken in a single serving size between 1 mg and 3 mg before bedtime.

Coenzyme Q10, also known as ubiquinone, can be effective in preventing migraine attacks (x). The suggested serving size of coenzyme Q10 is anywhere from 50 mg to 200 mg once daily, depending on intended effect. There are individuals with specific health conditions that may benefit from taking higher dosages too, but this possibility should be discussed with a physician. Always measure this product with an accurate gram scale to get the best effects. No person should exceed the maximum limit of 800 mg per day.

If you’re taking drugs that include statins (such as Lipitor), anything derived from fibric acid (such as Lopid), beta-blockers (such as Toprol) and antidepressants containing Tricyclin (such as Elavil), you should speak to your doctor before taking a coenzyme Q10 supplement.

Migraines can be debilitating and negatively affect a person’s quality of life. With symptoms that might include intense pain, nausea, extreme sensitivity to stimuli, and even temporary inability to see or hear properly, those who suffer from them are often very motivated to find relief. While the exact cause of migraines is still unclear, it seems to stem from neurological disturbances in the brain. These disturbances can be triggered by many things including hormones, food, and stress. Genes may also play a role.

Despite the havoc they cause, there are some drug treatments available. In addition, making relatively minor lifestyle changes and utilizing certain dietary supplements can be part of the overall strategy to reduce their occurrence and severity.

Mediterranean Diet: Benefits, What to Eat & What to Avoid