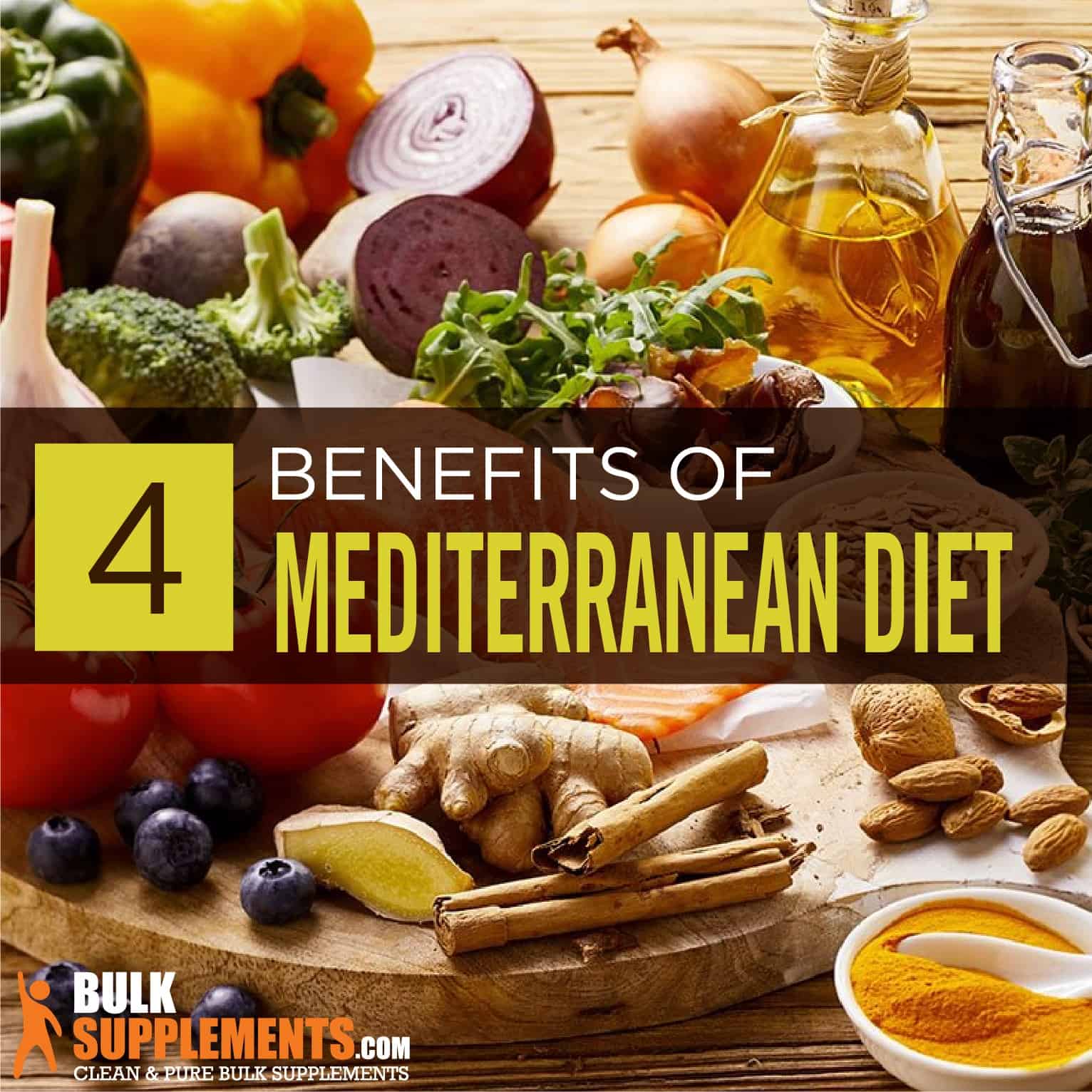 The Mediterranean diet is an extremely popular diet widely acclaimed for its health benefits. In fact, it was ranked first in the 2019 U.S. News and World Report Best Diets List (x).

When one thinks about Mediterranean meals, many picture pizza, lasagna, long loaves of white bread from Italy and chops of lambs from Greece. However, these dishes are not exactly in line with the healthy dietary guidelines advertised as the Mediterranean diet.

What is the Mediterranean Diet?

The Mediterranean diet is based on the traditional food the inhabitants of Greece, Crete and Southern Italy consumed circa 1960 (x). A true Mediterranean diet is centered on legumes, healthy whole grains, seafood, olive oil, fruits, nuts and vegetables which work great for everything from your heart to your bones. The diet is not just about eating fresh, plant-based food, but also incorporating daily physical activity to produce a profound effect on your mental health.

The tradition and history of the diet started from the social and eating patterns thousands of years ago in Italy and spreading to Greece, Spain, Turkey and other areas around the Mediterranean coast (x). It isn’t just a calorie restrictive diet, but more like a lifelong pattern of eating and living.

The region, despite having limited health services, had one of the highest life expectancies and lowest rates of chronic disease in the world in the mid-20th century (x). Cancer is much more prevalent in the United Kingdom, the United States and Scandinavian countries when compared to the Mediterranean region (x, x). The region also reports a lower incidence of heart disease in comparison to the United States.

While the Mediterranean diet has existed for thousands of years — way before studies were dedicated to it — the diet only began to gain a reputation for disease prevention, weight loss and other health issues in the 1990s after a doctor from Harvard University showcased its health potentials (x, x, x).

Health Benefits of the Mediterranean Diet

The Mediterranean diet might be the eating plan suited for you if you are searching for a weight loss method that can promote realistic, effective weight management. It incorporates nutrient-dense foods, high-quality protein, healthy fats and relatively low carbs to help promote weight loss and management. A two-year randomized clinical trial carried out in Israel showed that participants on a calorie-restricted Mediterranean diet showed a mean weight loss of 4.4 kg (x).

Its focus on whole, fresh foods makes it an excellent way of achieving safe and sustainable weight loss. It encourages the replacement of simple carbohydrates with filling low-calorie foods like vegetables, fibers, fruit, beans and legumes. Another reason why this diet is great for weight management is that it is easier to stick to in the long run when compared to other more restrictive diets. Since it incorporates a different variety of foods, you can still get to enjoy your favorite foods while on the diet without feeling the urge to give up.

A 2010 analysis of trial data published in The Lancet: Diabetes and Endocrinology showed that subjects who were placed on a Mediterranean diet lost more weight than subjects on a low-fat diet (x).

In comparison to the United States, the incidence of heart disease in Mediterranean countries is considerably lower (x). This can be attributed to their lifestyle and dietary choices, including their encouraged physical activity.

Research has shown that the high content of monounsaturated fat and omega 3 fatty acids in the Mediterranean diet, among other things, has been linked to a significant reduction in heart disease (x). The diet has an impact on oxidized low-density lipoproteins — the bad cholesterol that can accumulate in the arteries and increase the risks of cardiovascular mortality.

The foods on the Mediterranean eating plan isn’t only to be credited for keeping our cardiovascular system strong, but so also is the drink — red wine — which may lower the risk of heart disease. Take note that the diet only recommends it in moderation, so men or women above 65 should consume no more than five ounces daily (x).

A 12 years study carried out by a team of researchers from Harvard Medical school involving 25,000 American women showed that there was about a 25 percent decrease in the incidence of heart attack and stroke in participants that had a middle and upper intake of the Mediterranean diet compared to those who had a low intake (x).

Another finding from a 2013 randomized clinical trial referred to as the PREDIMED trial carried out on 7,477 participants in Spain, and published in the New England Journal of Medicine, showed promising results (x). The study, which was carried out on participants who had type 2 diabetes and were at a high risk for cardiovascular disease, showed that the group who were on a calorie unrestricted Mediterranean diet high in nuts or olive oil had a 30 percent reduced risk of heart issues.

Type 2 diabetes is a metabolic state that can be reversed primarily through weight loss from combining a healthier diet with increased physical activity. People with type 2 diabetes experience insulin resistance, and the key to reversing it is to lower carb consumption in order to reduce the excess sugar level of the blood. The plant-based Mediterranean diet can help keep the blood sugar level in check and reduce the risk of developing type 2 diabetes (x). Due to its rich calories of whole foods — healthy fatty acids, quality protein, and low sugar carbohydrate — it helps in efficient fat burning and helps retain energy.

Research has suggested that the Mediterranean diet can act as an anti-inflammatory agent to help stave off diseases such as type 2 diabetes and metabolic syndrome caused by chronic inflammation (x). The Mediterranean diet also helps to regulate insulin production — the hormones responsible for controlling blood sugar levels and weight gain despite being on a diet. This makes it beneficial for preventing diabetes.

The Mediterranean diet has some brain-boosting benefits that can help treat mental health issues like depression, anxiety and even ADHD. The mental disorders occur when dopamine — the hormone responsible for regulating our moods and processing our thoughts — isn’t adequately supplied to the brain. The Mediterranean diet incorporates healthy fats and probiotic foods that can help produce this feel-good hormone. These foods also help to improve gut health — another trigger for mood disorders.

A recent study that is an aggregate of the results of 41 different studies showed that there was a relationship between the Mediterranean diet and a reduced risk of developing depression (x). The journal Molecular Psychiatry also published a study in 2018 that showed that healthy eating habits in line with the Mediterranean diet could help decrease the prevalence of depression (x).

Dementia or Alzheimer’s disease that causes repeated loss of memory is a significant concern for older adults. However, the Mediterranean diet helps to protect seniors from these risks. Its rich, healthy fat content makes it a brain-boosting agent for preventing cognitive decline. A small study published in the journal Neurology in May 2018 followed the eating pattern of 70 people and showed that participants who didn’t follow the Mediterranean eating plan had a higher risk of Alzheimer’s disease compared to those who did (x).

The Mediterranean diet helps to improve our blood sugar levels, cholesterol level and maintain the health of our blood vessels. All these work together to reduce your risk of developing Alzheimer’s disease or dementia. The journal Frontiers in Nutrition published a study in July 2016 that concluded that adhering to a Mediterranean diet is being associated with improved cognition and slower cognitive decline (x).

The Journal of the American Geriatrics Society published a study called the Health and Retirement Study which aimed at seeing if the Mediterranean diet would help reduce inflammation and improve memory in older adults (x). The study was carried out on 5,907 older adults and was grouped into different diet types which included the Mediterranean-style diet. At the end of the test, the results showed that those who were on the Mediterranean-style diet recorded a 35 percent decrease in their chances of scoring low on their cognitive test.

May Help Ward off Specific Types of Cancer

Data from the National Cancer Institute shows that about 38.4 percent of Americans are likely to get cancer at some point in their life (x). You can increase your chances of being off these statistics by incorporating the right food in your preventive care plan. The plant-based Mediterranean diet that includes tons of veggies and fruits can help ward off cancer in a lot of ways, from delaying tumor growth to stopping cell mutation.

A meta-analysis and review of 83 studies examining more than 2 million people in 2017 published in the journal Nutrients suggested that the Mediterranean diet helped to reduce the risk of developing cancer — specifically colorectal and breast cancer — and reduced the risk of cancer-related deaths (x).

Also, according to a study published in the journal JAMA Internal Medicine in 2015, women who were on the Mediterranean diet showed a 62 percent reduced risk of breast cancer compared to those on a low-fat diet (x).

Natural and unprocessed foods should be the bulk of your eating plan when on the Mediterranean diet. You get to enjoy a lot of delicious foods and might even get some new favorites because the diet isn’t restrictive. Try to get a balance of minerals, vitamins and nutrients by shooting for a wide variety of food. Some of these foods are:

The College Student’s Guide to Nutrition: How to Eat Healthy in College

Eat plenty of leafy greens like kale or spinach, non-starchy veggies like cauliflower, artichoke, fennel and eggplant, fruits like oranges, berries and pears. Other produce to also include are tomatoes, broccoli, melon and Brussels sprouts (x, x).

Legumes will provide a great source of fiber and protein for people who follow this diet. For this, try to eat beans, lentils, peas and chickpeas.

This is another vital part of the Mediterranean diet; however, only eat it in moderation. Try to eat yams, turnips, potatoes and sweet potatoes.

Fish and Other Seafood

A lot of research has attributed some of the legendary health benefits of the Mediterranean diet to its copious amount of healthy fats from nuts, avocado and olive oil (x, x).

Accentuate the taste, smell and look of your meals with oregano, parsley, pepper, rosemary, mint, sage, garlic, basil and nutmeg.

Plenty of fresh water, a moderate amount of tea and coffee and often times a daily glass of red wine should be consumed.

The main foods to avoid when on the Mediterranean diets are heavily processed foods and foods containing added sugar and refined carbohydrates. Here is a more specific list:

The Mediterranean diet doesn’t just provide a tasty way to drink, eat and live, but is also one of the healthiest diets known to man. It has been used for thousands of years and is still being used for a host of health issues which includes cognitive impairment, cancer, heart issues, weight loss, mood disorders and type 2 diabetes.