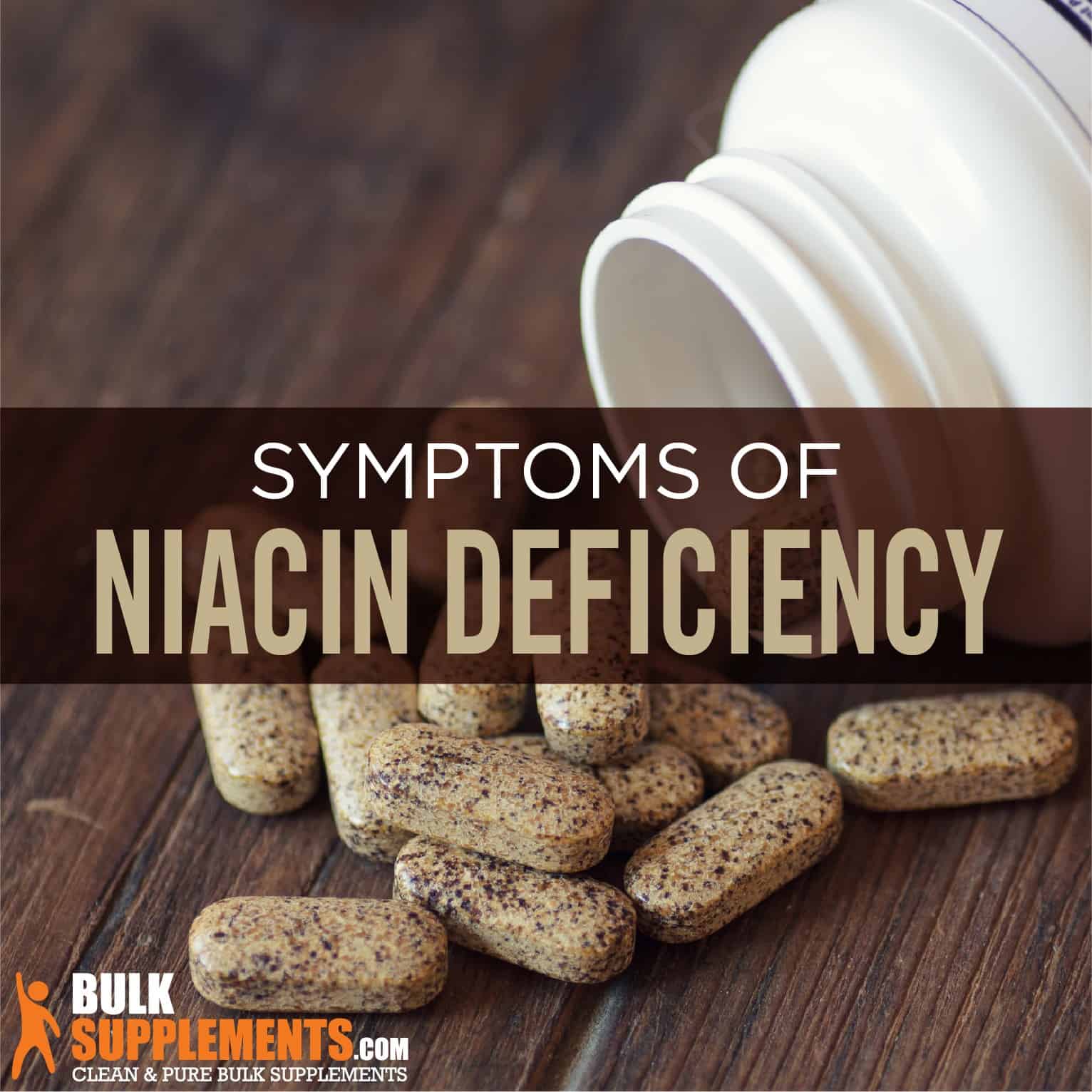 What is Niacin Deficiency?

Severe niacin deficiency leads to a condition called pellagra that physicians also call “the four D’s.” Niacin is a form of vitamin B3 and patients suffer from deficiency if they have low levels of the vitamin in the body. To understand the deficiency, it is important to first understand vitamin B3.

Vitamin B3 is one of eight vitamin B nutrients. Specifically, vitamin B3 converts food into energy and helps the body utilize proteins and fats. In doing so, it helps keep the skin and hair healthy and keeps the nervous system functioning properly. Vitamin B3 also has cholesterol-lowering, antioxidant and anti-inflammatory benefits.

Mild deficiency may not attract attention, but a severe deficiency may be life-threatening and cause what researchers call “the four D’s.” The “four D’s” associated with niacin deficiency are dermatitis, diarrhea, dementia and death. However some researchers may choose to call it “the three D’s” to avoid mentioning death.

Dermatitis is a skin rash and it is one of the disorder’s trademarks. The rash may cause discolored, itching and burning patches of skin. The skin may look thick, crusty, scaly or cracked. A skin rash is one of the earliest symptoms of the deficiency and one of the most important signs since dementia and diarrhea often occur at much lower frequencies (x).

Another common symptom is swelling in the mouth and on the tongue. The patient may also develop sores on the tongue, mouth or gums. The reason niacin deficiency affects the mouth is because it is a malnutrition disease, which often produce oral symptoms (x).

Since niacin deficiency is a malnutrition disorder from a patient’s inability to convert food into energy, it causes diarrhea, constipation and vomiting. This is the body’s response if it does not get the nutrients it needs. These digestive changes may be some of the most debilitating, since they reduce the patient’s energy even further (x).

The third “D” is dementia, a general term for a group of diseases characterized by a severe decline in cognitive function. It affects memory, language and problem-solving skills. It is an umbrella term for a wide range of conditions, such as Alzheimer’s disease, Huntington’s disease, Parkinson’s disease and Down syndrome (x, x).

Niacin deficiency can be fatal. Early symptoms are not very specific, but without treatment they can cause life-threatening organ failure. As the disease progresses, patients may develop anorexia. However, it does not necessarily have the same psychological factors as anorexia nervosa, in which a patient intentionally avoids weight gain. Anorexia as a medical condition is a lack of appetite from emotional stress, anxiety, surroundings or a physical disorder such as pellagra (x). Patients may also become stuporous and enter a coma (x, x).

Malnutrition and poor diet is one of the most common causes of niacin deficiency. There are several foods high in niacin or vitamin B3, including chicken breast, tuna, turkey, salmon, anchovies, pork or ground beef. These foods have the necessary proteins needed to provide energy for the body (x).

Typically, the small intestine or the stomach absorbs niacin. Then the body metabolizes it as energy and turns into NAD. Although this is a natural process, some patients’ bodies cannot absorb niacin, which results in niacin deficiency. All tissues in the body need niacin, so the inability to absorb it may be a serious health concern (x).

In most cases, patients can treat niacin deficiency with supplements. However, it is important to consult a medical care provider first. Physicians may prescribe niacin for various other conditions and it may cause serious side effects in improper doses. The supplement may help restore niacin levels in the body. It is available in different supplement forms, including niacinamide and inositol hexaniacinate (x).

The recommended dosage for pure niacin (vitamin B3) powder and vitamin B3 (niacinamide) is 100 to 500 mg a day. Take it with meals because it increases HCL production to help with digestion. Do not take more than 1 g of the supplement unless a physician advises it. The recommended dosage for niacin (inositol hexanicotinate) powder is 625 mg a day, or following a physician’s instructions.

The supplement may cause side effects, such as headaches and rashes. Taking large doses can cause more severe side effects that may be fatal. For example, it may cause stomach ulcers and liver damage in excessive doses. Patients with diabetes or heart, liver or kidney problems should speak to a doctor for approval before taking this supplement. Patients who are pregnant or breastfeeding should not take it.

Physicians may also recommend dietary changes to help balance nutrients in the patient’s body. Since it results from malnutrition or imbalanced diet, implementing a more balanced diet may help restore niacin levels naturally. It is present in several different foods, including (x):

Niacin (vitamin B3) deficiency can lead to a life-threatening condition called pellagra. In some cases, the deficiency may not draw patients’ attention but in severe cases, it can be fatal. Physicians refer to it as “the four D’s” because it causes dermatitis, diarrhea, dementia and potentially death. Most often, the condition affects patients in undeveloped countries or those who live in poverty with a limited diet. It is not very common in industrialized nations, though it is still possible. Other causes include alcoholism, medications and eating disorders. A patient may also develop it if the body cannot absorb niacin properly.

Treatment usually involves supplements and dietary changes to include more niacin-rich foods. Patients should consult a doctor before taking any supplements to treat this deficiency. It may cause side effects and interact with other medications. Supplements are not an adequate substitute for medical treatment or medical advice, but they may improve overall health.