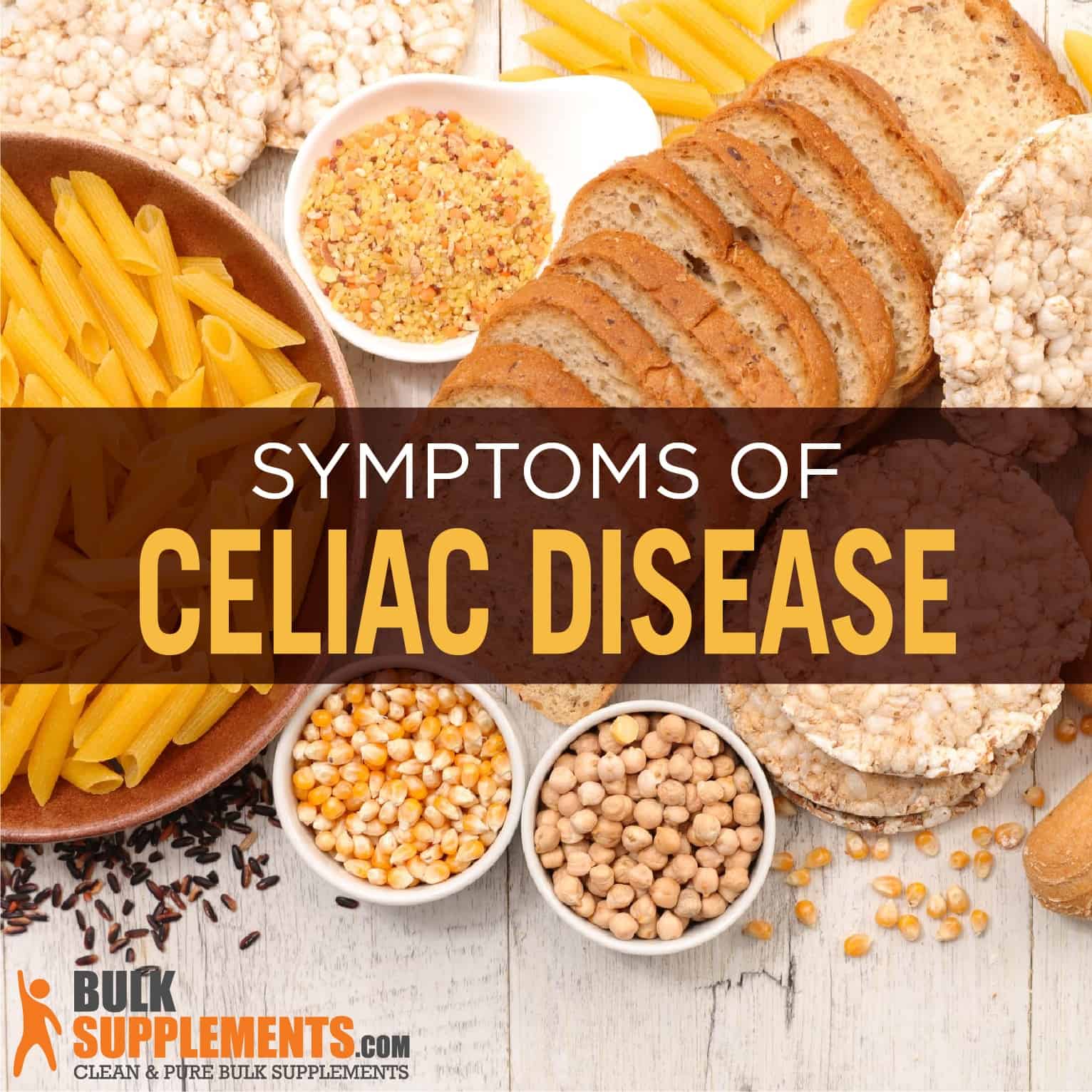 What is Celiac Disease?

Celiac disease is an autoimmune disease (x). You can also come across it being referred to as spruce or coeliac.

Celiac disease is typified by the autoimmune response triggered by the presence of gluten in the body. Gluten is a protein that is found in wheat, rye, and barley. The immune system reacts to a substance within the gluten, called gliadin, as if it were a threat (x).

The effects and symptoms of celiac disease can be varied. In some cases, the effects are limited to things directly linked to the digestive system, such as diarrhea, and bloating. It is common to see sudden weight loss or growth progress stopping in children. Celiac can also cause symptoms that seem unrelated to the digestive system, such as, rashes, ulcers, joint pain and numbness in the hands and feet (x, x, x).

The wide range of symptoms, coupled with the fact that they can come and go, has historically been a reason why celiac disease has been misdiagnosed. It is now thought that around 1 in 100 people in the world have celiac disease (x, x).

There is some uncertainty about whether gluten intolerance or non-celiac gluten sensitivity is a medical condition. Some studies have found signs it exists, while others have not (x, x). On the other hand, there is plenty of evidence for celiac disease.

The major difference between the two conditions is the severity of the response. Celiac disease can be triggered by minute amounts of gluten and causes physical damage to the gut. Intolerances, to any foods, are not as severe. If you have an intolerance to a specific food you can eat small amounts of it without problems and any effects that are caused are transient, not long lasting (x).

Anemia is the name of a condition where you either have too few red blood cells, or the ones you have are not working as they should. Anemia can be caused either by a lack of iron or by a lack of vitamins B12 or B9 (x). As celiac disease damages the small intestine, an therefore the ability to absorb nutrients correctly, it is not surprising that celiac can cause anemia.

Anemia causes you to feel extremely tired and lacking in energy. It can also affect the functioning of other body systems, most often the nervous system, leading to issues like pins and needles. In extreme cases, anemia can cause psychological problems like depression confusion and poor judgment (x).

Around one in ten people who have celiac disease present with a chronic rash. The rash is extremely itchy and can even blister (x). The rash appears symmetrically on the body, centered around the elbows, knees scalp and down the back. In a small number of cases, the rash can also affect the face and groin (x).

Often, people who develop the rash do not develop other digestive symptoms. It is most likely to accompany symptoms like joint pain, thyroid disorders, and osteoporosis (x).

Celiac disease causes the rash as a result of the antibody created in the gut. The antibody, immunoglobulin A, can easily enter the bloodstream. If it then collects in small blood vessels it can lead to further immune responses at these sites, causing the intensely itchy celiac rash (x).

If you do suffer from chronic headaches with no clear cause, then it may be worth investigating celiac disease as a possible culprit (x).

Fatigue is a common symptom of celiac disease. The feeling of constant tiredness is reported by a large proportion of people with celiac disease (x, x, x).

The exact way in which celiac disease leads to fatigue is unclear (x). However, it would not be unreasonable to think that it may be related to the malabsorption of key nutrients in the diet that results from the damage to the small intestine (x).

Acid reflux is a symptom of celiac disease that is often associated with patients who don’t have many other symptoms, or who do not link their symptoms together. This is sometimes referred to as silent celiac disease. These are people who don’t report many, or any, symptoms but have damaged small intestines (x).

If you do suffer from acid reflux on a somewhat regular basis, it can be worth keeping a food diary to see if there might be a gluten link. In these cases, switching to a gluten-free diet can have a range of positive health benefits (x).

Due to the many associated celiac disease complications, early diagnosis is important. The long-term effects of celiac disease are harder to reverse (x). The damage to the intestine and associated body systems can be severe. For instance, if the disease leads to osteoporosis then there is little that can be done to improve bone condition.

Why So Many Symptoms?

The list of symptoms associated with celiac disease is extensive. It might seem strange that one disorder can look so different in different people, but there are a range of factors that affect how the disease presents.

For instance, how long a child is breastfed for can affect when the symptoms begin to show. Babies who are breastfeed for longer don’t begin to suffer symptoms until later in life and they tend to be milder. Another major factor is the level of damage that has happened to your intestine. If you have been eating large amounts of gluten for a long time the damage can be extensive, leading to a wider range of symptoms (x).

Celiac disease is not a simple condition. It is known that there is a genetic component. If you are closely related to someone which celiac disease then you have a one in ten chance of developing celiac disease, which is substantially higher than the general population (x).

While there are known genes that can increase your chances of developing celiac disease it’s not a guarantee (x). It is believed that there are a range of environmental factors that contribute.  Some known environmental links include the duration of breastfeeding, age of introduction to gluten, the occurrence of gastrointestinal infections at a young age, and the bacteria present in the gut (x).

There is no natural cure for celiac disease. It is an autoimmune condition, so the only option is to manage the symptoms. Which is done by changes to the diet.

There are several studies being done on celiac disease (x). However, there are few options for cures. Gene therapy is one possibility, but it is a long way from human trials.

For celiac disease, treatment is via dietary change. The removal of gluten from the diet is the only way to reduce the occurrence of symptoms (x). Once the gluten is removed from the diet, it allows the gut the opportunity to heal. The more damage that has been caused the harder it is for this healing to take place. Early diagnosis and dietary change leads to speedier and more complete recoveries (x, x).

Following a gluten-free diet can be surprisingly difficult and as a result, many of those attempting to eat completely gluten-free can still find themselves suffering from symptoms (x).

When a gluten-free diet appears to be ineffective it is often the result of gluten still being present. Remaining gluten-free is a challenge, as gluten-free foods can be hard to identify, and they can also often be more expensive (x).

In some people, it only takes a small amount of gluten, such as the crumbs on a chopping board, to trigger the autoimmune response (x). The help of a dietician and education resources can be vital in fully removing gluten from your diet (x).

In a small number of cases, even after strictly following a gluten-free diet, the damage to the small intestine can persist. These cases are known as refractory celiac disease. In these cases, further medical investigation is required (x).

As one of the long-term health concerns for those with celiac disease is osteoporosis, adding a gluten-free calcium supplement to your diet can help to protect your bone health.

Calcium lactate is a great option as it is free of gluten and dissolves easily in water. Taking one and a quarter teaspoon twice a day will provide you with the recommended levels of calcium for promoting bone health (x).

Low levels of zinc in the diet are linked to the deterioration of gastrointestinal systems (x). If you are embarking on a gluten-free diet to allow your gut to heal then it is important to maintain the levels of zinc in your diet.

Zinc orotate is a gluten-free supplement that provides you with good levels of bioavailable zinc. 100mg one to three times a day will ensure that you are not deficient in this vital mineral.

Even for those who have healthy guts, vitamin D deficiency is common (x, x). The benefits of vitamin D are well documented and low levels of this vital substance lead to an inability to absorb calcium from your diet (x). It is known that people with a malabsorption condition, such as celiac disease, are at high risk of having insufficient levels of vitamin D in their bodies (x).

Vitamin D3 is recommended as an ideal supplement for those who have insufficient levels of vitamin D in their diet (x). Taking 50 mg per day will ensure you maintain the levels needed, this is because the capsule contains vitamin D in an easily bioavailable form, making it easy to absorb.

Celiac disease is an autoimmune disease, which if left unaddressed can cause a wide range of long-term health problems. The symptoms are wide ranging and affect more than just the digestive system.

The only treatment for celiac disease is to have a strict gluten-free diet. Gluten-free diets can be lacking in key nutrients so it can be advisable to consider taking gluten-free supplements to help maintain overall health and wellbeing.