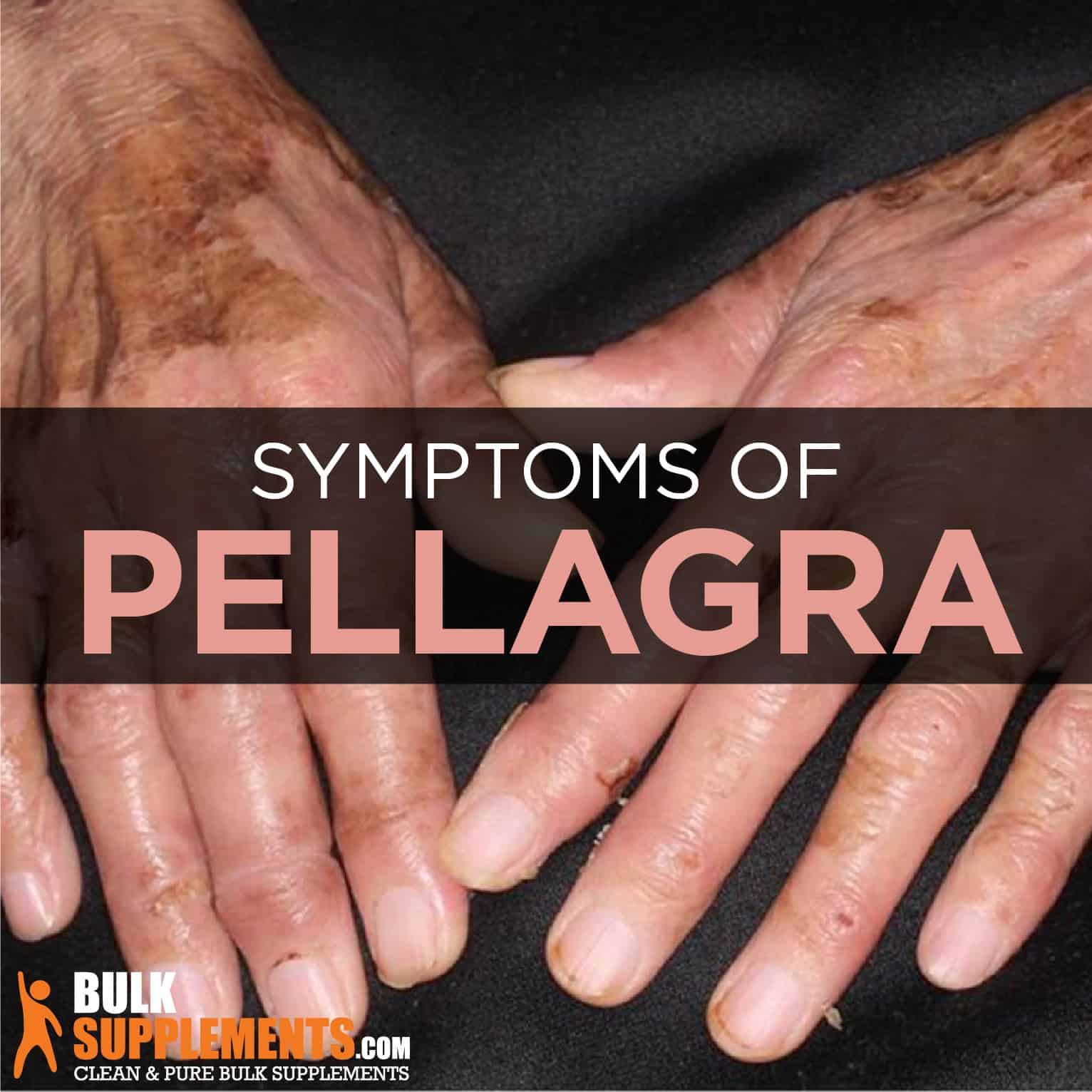 Diagnosing pellagra is difficult because the health concern stems from a systemic condition resulting from a severe niacin deficiency. You might have also heard of its alternative names — vitamin B3 and nicotinic acid. Niacin helps your body’s nerves, skin and digestive system. The supplement can also change the food that you’ve consumed to energy. (x)

Pellagra might also stem from a lack of tryptophan in your body, which helps the body process and manage niacin. If your body lacks tryptophan, it plays a vital role in causing pellagra because your body will not use the available niacin in the system. Currently, health concerns are rare in developed countries. However, it may sound hard to confront, but it’s actually essential and straightforward to know how to detect pellagra and remedy it quickly. If not, you could end up, in worse-case scenarios, dead.

As mentioned above, pellagra can occur if individuals who do not have adequate protein in their diets, particularly proteins that contain the essential amino acid tryptophan. At one time, it was a significant public health concern in the United States, but it is now exceedingly rare. It has, however, occurred in regions of the world where food is scarce. (x) (x)

Secondary pellagra may occur because of factors like cirrhosis of the liver, alcoholism and anorexia. And, if you take certain medicines, such as phenobarbital, pyrazinamide and hydantoin. (x) Primary pellagra mainly occurs in countries where corn is the staple food. (x)

Pellagra is insidious as it may begin with subtle symptoms that are similar to those of other health conditions, but it can progress to very noticeable and life-threatening symptoms. You can usually identify it by the four Ds — photosensitive dermatitis, diarrhea, dementia and death. (x) Other symptoms include loss of appetite, mental confusion, weakness and abdominal pain.

One can prevent pellagra by taking niacin supplements and consuming a healthy diet with adequate calories. One can manage secondary pellagra by getting proper treatment for the underlying condition — your body’s lack of assimilating niacin because it lacks proteins, the essential amino acid tryptophan.

Niacin, or vitamin B3, is one of the eight B vitamins. It takes two primary chemical forms, which have different effects on the body. Both forms can be present in foods and also in supplements. These forms are:

As a supplement, this is a form of niacin used to lower cholesterol levels and minimize the risk of heart disease. (x)

Unlike nicotinic acid, this form of niacin does not lower cholesterol levels. However, it helps to reduce the risk of non-melanoma skin cancer and treat psoriasis. (x) (x)

Your body cannot store niacin because the vitamin is water soluble. Your body may also excrete excess and unwanted amounts of the vitamin. The body can obtain niacin through consumed food, but it can also manufacture small amounts from the amino acid tryptophan, thus the connection to pellagra.

Understanding the Two Kinds of Pellagra

Primary pellagra develops because of inadequate nicotinic acid (niacin) and tryptophan in the diet. Nicotinamide coenzyme NAD synthesizes into your body from four precursors or forerunners. These are nicotinic acid, nicotinamide, nicotinamide riboside and tryptophan, known as vital coenzymes. Generally, your body converts niacin into an amide, which assists in cellular function and metabolism, keeping the body healthy. Niacin deficiency affects cellular functions in multiple tissues and organs.

Secondary pellagra surfaces and becomes diagnosed when there is adequate niacin in the diet, but other factors and diseases may alter its absorption and processing, like alcoholism, diarrhea and medicines.

The cause of pellagra depends on the type of pellagra diagnosed. Individuals with primary pellagra suffer because of inadequate niacin or tryptophan in the diet. Its risk factors include malnutrition and poor diet. If you depend on corn as a staple food, the niacytin present in it is a form of niacin that humans cannot digest and absorb unless prepared properly. Corn is also a poor source of tryptophan. (x)

Secondary pellagra will occur if specific problems prevent the absorption of niacin by the body. These problems may include alcoholism, certain medications such as immunosuppressive drugs and anticonvulsants, chronic diarrhea, cirrhosis of the liver, gastrointestinal diseases, carcinoid syndrome or anorexia, among others. (x)

Dermatitis, dementia and diarrhea are the major symptoms associated with pellagra because a deficiency of niacin is highly noticeable in areas of the body where there are high rates of cell turnover, such as the skin or gastrointestinal tract. If untreated, it may cause a fourth D, which is death. Death typically occurs within four to five years if one does not receive immediate treatment. (x) (x) (x)

Dermatitis caused by pellagra begins in the form of erythema (redness of the skin) with intermittent or acute onset. Acute dermatitis resembles sunburn in its initial stages.

Signs and symptoms of pellagra may include: (x) (x)

Gastrointestinal issues are prevalent symptoms of pellagra. These issues include:

Around 4-10 percent of individuals with chronic pellagra can develop mental symptoms. In some cases, neurological signs appear early and may be challenging to identify and become misdiagnosed. These symptoms include:

The reddening of your skin is the first sign of pellagra accompanied by superficial scaling in areas exposed to heat, sunlight and friction. Symmetrically distributed, the reddening appears in exposed areas. These are mainly the forearms and the back of the hands.

You will see a symmetrical rash with a transparent edge that sits between affected and unaffected skin also commonly occurs. It typically causes an itching or burning sensation. With time, the skin may become thick, hard and scaly. It can also crack, and bleeding may occur, which later results in blackened crusts.

People with the condition may notice lesions forming anywhere on their body, especially the arms, hands, lower legs, face, feet and neck. The tongue, gums and lips may be sore and start peeling. Dermatitis may also form around the neck — a symptom called Casal necklace.

Pellagra may be tricky to diagnose because of the wide range of symptoms it causes. There is also no specific test to diagnose a niacin deficiency. However, urine tests may help to check if there is adequate niacin in the body. A blood test may also be necessary to see how your body manages cells, chemicals, proteins and other substances, known as blood work. (x)

The health care provider may complete a physical exam that involves asking the patients about the foods they eat.

The doctor may also check the patient for any rashes, changes in mental state and gastrointestinal problems.

In many cases, pellagra diagnosis aim at checking if the patient’s symptoms respond to niacin supplements.

Although uncommon, pellagra does occur in children. Younger patients may not show the typical symptoms associated with it, which makes diagnosis a bit tricky. Usually, children with the condition may also suffer from other nutritional deficiencies because of an underlying illness or socioeconomic circumstances.

Pellagra treatment aims to increase the body’s niacin level. The patients predominantly take niacin or nicotinamide supplements and dietary changes. The patients may also need to take other supplements.

Treating secondary pellagra mainly focuses on treating the underlying cause. A few cases of secondary pellagra have responded positively to taking nicotinamide (another form of vitamin B3) or niacin either intravenously or orally.

There are treatments for symptoms of it, such as skin sores. Skin improvement can, however, take several months. While recovering from any form of the condition, patients need to keep any rashes moisturized and away from sunscreen.

Please discuss with your healthcare provider about starting any new supplement before taking it. Make sure you have the correct diagnosis to determine the following supplements are essential for reversing your pellagra:

As a dietary supplement, take one vitamin B3 capsule daily, preferably with a meal (since it increases the production of HCL, which aids digestion further). Niacinamide can be dangerous in larger servings. Do not exceed 1 gram unless advised by a physician.

As a dietary supplement, take 100 mg (about 1/32 tsp) to 500 mg (about 3/16 tsp) of vitamin B3 powder daily, preferably with a meal. Again, avoid amounts exceeding 1 gram unless advised by a physician.

As a dietary supplement, take 500 mg (roughly 1/15 tsp) of tryptophan once or twice per day or as prescribed by a doctor.

Where to Buy Supplements for Pellagra?

You can purchase these supplements for pellagra at BulkSupplements.com. The company is an industry-leading manufacturer and distributor of pure dietary supplements.

Are you interested in trying any of these powders or supplements mentioned in this article as a possible solution to helping you with pellagra? Contact BulkSupplements.com to place an order today.

Pellagra refers to a deficiency in niacin. It is a rare condition in developed countries. It causes what is known as pellagra’s four Ds, which are its major symptoms — diarrhea, dermatitis, dementia and death, which all occur when treatment of the condition is not fast enough. Death because of pellagra occurs within four to five years. Most individuals experience a complete cure if they receive immediate treatment.

In most cases, the treatment of pellagra happens with niacin or nicotinamide supplements. People with underlying conditions that cause the condition require other personal care to help dissolve the deficiency.

You can prevent this health concern by making dietary changes that include a well-balanced and protein-rich diet. An individual with secondary pellagra may require treatment for the underlying condition, causing niacin or tryptophan deficiency to prevent any future recurrence. That may involve changing your lifestyle by avoiding habits that cause this health concern.