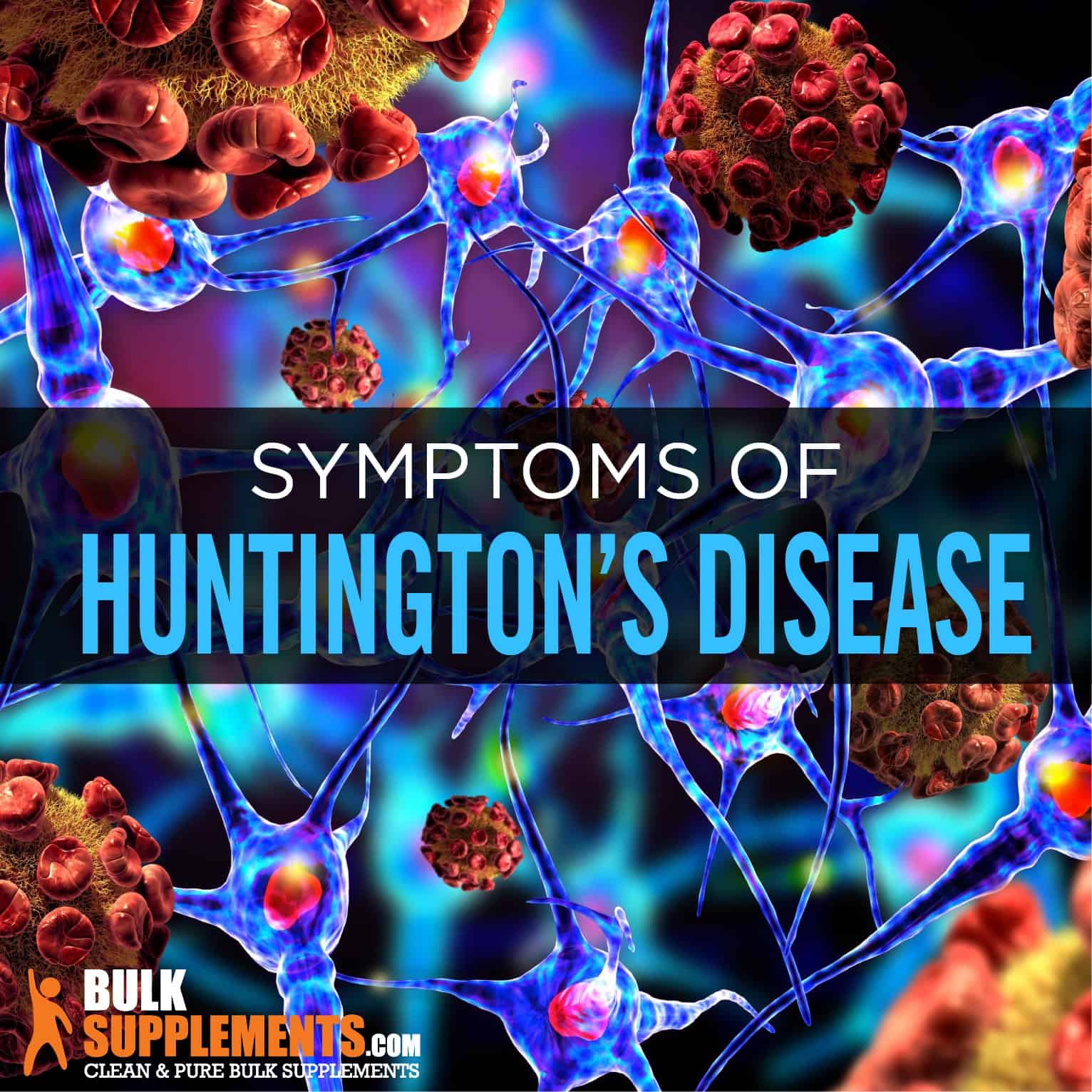 What Is Huntington’s Disease?

Huntington’s disease is a progressive brain disorder that causes uncontrolled movements, emotional changes and a decline in cognition. It is a hereditary disease, which means it is passed from parents to children. The statistics indicate that people of European ancestry are at an increased risk of developing this disorder. About 3 to 7 in 100,000 people develop Huntington’s disease (x).

Since the disease is hereditary, patients carry the defective gene that causes Huntington’s from birth. However, the first symptoms probably will not appear right away. Research indicates that juvenile Huntington’s disease is extremely rare. The majority of patients start showing signs between the ages of 30 and 50 (x). From that point, the disease progresses and worsens over time. Depending on the rate of progression, Huntington’s can eventually cause complications such as heart failure and pneumonia. Currently, there is no cure for Huntington’s disease (x). However, different treatments can help to slow down its progression and help patients manage the symptoms more effectively.

The symptoms will most likely appear between age 30 and 50. It is unlikely for symptoms to appear sooner or later, but it is not impossible. Huntington’s disease affects patients in three different ways. It causes movement, cognitive and psychological symptoms. The condition is progressive, so it gets worse over time. Eventually it causes disability and death from another illness or an infection. It progresses differently depending on the patient, but usually the duration is about 19 years on average. Most patients survive for about 10 to 25 years (x).

Huntington’s disease can cause weakened muscles as well as chorea, which causes jerking muscle movements (x). Research also notes abnormal saccadic eye movements in patients with Huntington’s (x). The condition also causes problems with gait and posture, although they may be more subtle (x). It may also cause difficulty swallowing and speaking clearly. The speech impairment may be mild, moderate or severe (x).

Because Huntington’s disease can damage brain cells, the condition may cause difficulties with self-control. The patient may also become more impulsive. This is especially a warning sign in children, if they become more impulsive than what is considered normal for their age. The condition may also make it harder to concentrate, organize thoughts and solve problems (x).

Although it is rare, symptoms can develop in children and adolescents. Juvenile Huntington’s disease is similar to adult-onset Huntington’s, but there are some differences. For example, in some cases, behavioral problems may be the first symptom that parents notice, as well as difficulty in school and a sudden decrease in academic performance. It can indicate that the child is having trouble with memory or concentration. Also, seizures are much more common in juvenile cases than in adult ones, especially if the patient shows symptoms before age 10. The condition also progresses more quickly in children than adults. In some cases, it can even be fatal within 10 to 15 years after symptoms appear (x).

Huntington’s disease is genetic, which means that it develops from abnormal gene patterns in the DNA. It is also heritable, meaning it passes from parents to their children. Specifically, it is a genetic mutation in the HTT gene, which is responsible for producing huntingtin protein. It relates to the neurons in the brain, but scientists do not know exactly what the protein does (x).

HTT is related to a DNA segment called CAG trinucleotide repeat, made up of cytosine, adenine and guanine. They appear sequentially in the gene. HTT contains 10 to 35 repetitions of this segment, but in patients with Huntington’s, it has 36 to 120 repetitions. If an individual has between 36 and 30 repetitions, they may not show symptoms. However, if the individual has more than 40 repetitions, it is very likely that they will develop Huntington’s.

The condition has an autosomal dominant pattern that transfer the gene mutation to offspring (x). In other words, patients usually only inherit it from one parent and each cell only needs one copy of the mutated gene to cause Huntington’s. It is important to note that all people carry the gene that causes the condition, but when the gene sequence mutates, it causes abnormalities in the brain. The defective gene causes abnormal huntingtin protein production, which can disrupt normal brain function. Although it is rare, it is also possible to develop the disorder without inheriting it from a parent (x, x).

Doctors diagnose the condition with genetic tests. The doctor will look at the patient’s DNA to identify any changes in chromosomes, genes and proteins. Specifically, they will draw a blood sample and count the number of times the CAG pattern repeats in the HTT gene (x).

There is no cure for Huntington’s disease. If necessary, medical professionals may recommend medications to help keep the symptoms under control. For example, tetrabenazine can help control involuntary muscle movements. Doctors may also prescribe antipsychotic drugs, antidepressants and tranquilizers (x). Therapies aim to help patients manage the symptoms, but they do not treat the condition (x).

Huntington’s attacks the patient’s nerve cells and they may lose control of the muscles in the mouth and throat, making speaking and eating more difficult. However, speech therapy aims to help to slow down the development of these symptoms and help the patient communicate more effectively. The speech therapist can identify which muscles the condition affects the most and help the patient exercise them so that they stay strong for as long as possible. However, the condition is progressive, so treatment will vary over time (x).

Because Huntington’s causes involuntary movements, patients can try physical therapy in an attempt to combat them. Most of the exercises that therapists teach patients aim to prevent them from falling, correct walking, build coordination and help control the body better. Physical therapy requires a lot of persistence and it focuses on long-term results, but some patients do not utilize it. Reports indicate that only 8 percent of patients receive physical therapy. But many studies focus on the positive effects of physical therapy in managing Huntington’s (x, x, x).

Since Huntington’s disease attacks mental performance, it can be helpful for patients to set up a daily routine. Having a consistent schedule for everyday activities—personal care, household tasks, etc.—may help the patient finish tasks more easily. Diaries and calendars can also help (x).

Participating in projects or tasks can help patients maintain energy and attention. It may also boost morale if the patient suffers from depression (x).

Exercise is very important for Huntington’s patients. It can help combat fatigue and psychological symptoms, such as depression or sleep disorders. Incorporating exercise into the patient’s routine can help maintain the habit (x).

Additionally, patients can consider supplements that may address symptoms of Huntington’s disease. However, supplements are not a cure for any medical treatment. They are only intended to benefit overall health. Always consult a doctor before starting a supplement regimen.

The brain stores phosphocreatine and since Huntington’s disrupts brain function, creatine is there to help maintain optimal brain function. Studies show that supplements can slow the progression of some neurological disorders, including Alzheimer’s (x, x). Scientific studies also confirm that creatine can help delay the onset of Huntington’s disease symptoms (x).

There are many different forms of creatine. Creatine monohydrate is the most similar to what the liver, kidneys and pancreas produce naturally. As a dietary supplement, take 2,500 to 5,000 mg a day. Try to take it before a workout or other physical activity. Consult a doctor before taking this supplement.

Studies suggest that oxidative stress can worsen neurodegenerative conditions (x). Antioxidants help reduce oxidative stress in the body that can cause signs of aging and disease. One common example is Vitamin C. A healthy diet full of foods with strong antioxidant properties is a good way to do it. But supplements can help maintain a consistent daily dosage. As a daily supplement, take 1,000 mg of Vitamin C powder a day, after consulting a doctor.

With very high antioxidant properties, resveratrol can also help combat oxidative stress. Researchers also hypothesize that it may help interfere with beta-amyloid, which form plaques that cause Alzheimer’s disease. The recommended dosage for pure resveratrol is one capsule per day, or following a doctor’s instructions.

Found in food, oils, margarine and dressings, Vitamin E is a lipid-soluble vitamin that neutralizes free radicals in the body. Studies suggest that it can protect nerve cell membranes from these free radicals, potentially serving as a useful tool to treat neurodegenerative conditions like Huntington’s disease (x). As a dietary supplement, take Vitamin E powder 700 IU in 500 to 1,000 mg doses daily with meals. Consult a physician to confirm the dosage.

Also an antioxidant, Coenzyme Q10 (COQ10) helps delay signs of aging and disease. It occurs naturally in the body and there are also several dietary sources, including beef, chicken, egg yolks, fatty fish, dairy, fruit and vegetables. Studies suggest that it can potentially help treat neurodegenerative disorders by interfering with excess beta-amyloid production that cause neurodegenerative conditions (x). The recommended dosage for Coenzyme Q10 (COQ10) powder is 50 to 200 mg, or following a doctor’s instructions.

From the Linum usitatissimum plant, flaxseed is a small plant-based protein. They host minerals like manganese and thiamine (Vitamin B1) and provides dietary fiber. They are high in antioxidants and help reduce signs of aging and balance hormones. Flaxseed may also be beneficial to manage mental illness, including depression, which is a symptom of Huntington’s disease. As a dietary supplement, take one to three flaxseed oil softgels daily with meals after consulting a doctor for dosage and safety information.

Huntington’s disease is a progressive, genetic brain disorder without a cure. It develops as a result of a mutation in the HTT gene that causes the body to produce an excess amount of huntingtin protein. The condition causes movement, cognitive and psychological symptoms. Patients experience involuntary muscle movements, making jerking motions and abnormal eye movements. It also causes difficulties speaking and swallowing. Patients also have difficulty concentrating and solving problems, as well as with impulse control. Depression, insomnia and narcolepsy are also common psychological symptoms.

There is no cure for Huntington’s disease, but speech and physical therapies aim to slow the symptoms’ progression for as long as possible. Doctors may also prescribe medications to address mental health difficulties and involuntary muscle movements. There are also several supplements that studies suggest may help treat neurodegenerative disorders, including Alzheimer’s and Huntington’s disease. However, supplements are not a cure for any medical condition. They are only designed to promote overall health.