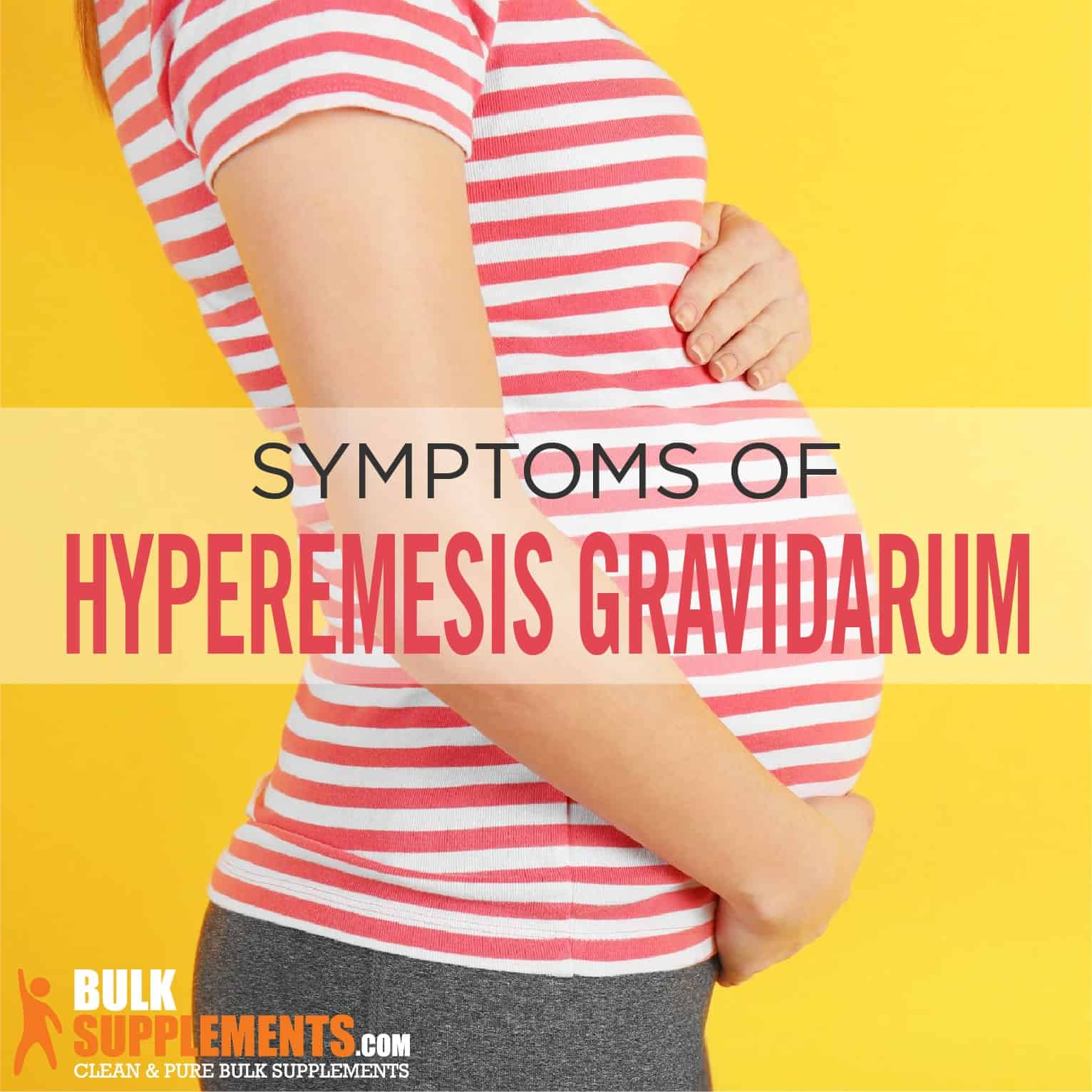 What is Hyperemesis Gravidarum?

Though hyperemesis gravidarum and morning sickness are both complications of pregnancy, they result in widely varied symptoms for each woman. Some shared symptoms are an aversion to certain odors and foods, sensitivity to motion and fatigue. In order to treat each condition properly, it is important to distinguish one from the other.

Hyperemesis gravidarum symptoms can be harmful to the health of the fetus and the mother. The constant vomiting and inability to eat can lead to a deficiency of minerals and vitamins. Dehydration is also a common symptom that is a result of frequent vomiting. Many women have reported that they experience an excessive amount of salivation which is called ptyalism. Increased pulse rate and rapid heartbeat are also symptoms linked with hyperemesis gravidarum (x, x, x).

When the body starts to burn existing body fat instead of consumed sugars, it is considered as being in a state of ketosis. Hyperemesis gravidarum reduces calorie intake significantly, which can cause the body to go into ketosis. As a result, a woman suffering from HG may have “keto breath” (x).

Morning sickness is usually characterized by vomiting and nausea. It starts around the 4th week of gestation and ends around the 13th week. Morning sickness can cause a loss of appetite, fatigue and a general feeling of being unwell. Vomiting due to morning sickness, however, won’t generally cause dehydration. Depending on the severity, it can make completing regular tasks difficult (x).

Half of all pregnant women will experience morning sickness. The condition isn’t harmful to the fetus or the mother and is caused by an increase in the concentration of certain hormones during gestation.

Hyperemesis gravidarum, however, presents with extreme nausea, weight loss, vomiting and a disturbance of the electrolytes in the body. A loss of appetite early in pregnancy can be a sign of HG or regular morning sickness. Some women may need to be hospitalized due to HG so nutrients and fluids can be provided intravenously. Hyperemesis gravidarum usually starts around the 5th week of gestation and will either subside by the 20th week or continue up until birth (x).

Those who present with emesis, which is vomiting, during pregnancy will be checked for other ailments. Getting a stomach virus during pregnancy is not uncommon and can also be a cause of vomiting. After morning sickness has been ruled out, a doctor may test for ketones in urine during pregnancy to rule out diabetes (x).

The most common physical symptom of hyperemesis gravadium is constant (or near constant) nausea, vomiting, vomiting blood and a loss of appetite.

Persistent vomiting and vomiting blood are both very serious, and you should seek medical attention if you experience this.

Dizziness, headache and fatigue are common symptoms of hyperemesis gravadium. Though these may individually be caused by other aspects of the affliction, it is important to monitor them and seek medical advice when necessary.

Dehydration is a serious condition for anyone, but can be more dangerous for those who are pregnant. It can be caused by excessive vomiting and electrolyte loss as well as through insufficient water consumption.

The sub-symptoms of dehydration are (x):

Your pharmacist can help with dehydration, though if you are concerned or have been feeling this way for a prolonged period you should seek medical attention.

The persistent vomiting and nausea that come with HG usually last until at least the 20th week of gestation. The disorder has varying degrees of severity and, in many cases, it can cause serious amounts of weight loss. Many have lost more than 5 percent of their pre-pregnancy weight while dealing with hyperemesis gravidarum.

The exact cause of hyperemesis gravidarum is not known, but there are studies that link the disorder to hCG (human chorionic gonadotropin) levels. The placenta generates hCG when a woman becomes pregnant and the levels increase as the pregnancy progresses (x, x, x, x, x).

There are several factors that increase the risk of developing HG, such as multiple fetuses, obesity, trophoblastic disease or simply it being the first pregnancy or having a family history of HG.

There are some studies that state an imbalance of hormones may be the cause, or even due to an imbalance of the body’s carbohydrate metabolism. Helicobacter pylori infections have been known to trigger the onset of HG in some women (x).

Thanks to modern medicine, the disorders are no longer fatal. However, it was a common cause of maternal and fetal fatality until the 1950s.

Once hyperemesis gravidarum has been diagnosed, the severity will need to be ascertained. If the symptoms are extreme, it will lead to urgent hospitalization to help restore the electrolytes lost. A medical professional will provide fluids, nutrients and other medications intravenously to correct dehydration and malnutrition. HG often results in vitamin deficiency. In most cases, a doctor will prescribe supplements to help correct the issue. Vitamin C, vitamin B6 and thiamine are a crucial part of the supplement regimen. Thiamine will help prevent Wernicke’s encephalopathy from developing in women who are suffering from hyperemesis gravidarum (x).

In the event that passive measures are not effective, a doctor may prescribe an antiemetic medication, which helps to reduce vomiting. Other common medications used to help with nausea and vomiting are promethazine, meclizine and doxylamine succinate. They are administered intravenously or via a suppository. Once vomiting has been controlled, enteral nutritional supplements will be prescribed to reduce the occurrence of nausea (x, x, x, x, x).

Those who suffer from HG will need to follow a specialized meal plan once their symptoms are under control. Plain fluids should be taken in small portions throughout the day. Meals that are high in carbohydrates and have minimal levels of fat are recommended. Instead of taking fewer large meals, it’s best if those suffering from hyperemesis gravidarum consume several miniature meals throughout the day.

Hyperemesis gravidarum can be emotionally and mentally traumatic to both the woman and her family. Counseling is suggested to help pregnant women cope with the stress and complications that arise as a result of HG.  Keep in mind that medical attention is required to help manage this condition. Taking medicine while pregnant should only be done under the care of a medical professional.

Ginger has been used for centuries as a natural treatment for various ailments. Ginger root is used as a spice in cooking and as an herbal supplement. The natural form can be added to tea, chewed or even used in soft drinks. It can be concentrated into pill form or into a syrup for easier consumption.

Pure ginger root extract powder is an excellent way to help combat morning sickness, nausea, vomiting, motion sickness and an upset stomach. It is also an effective supplement for those suffering from HG. While ginger extract is generally safe, those who are taking diabetic medications and anti-blood clotting medications should speak with a medical professional as it is known to reduce its effectiveness. The recommended dosage is 1,000 mg taken once daily with a full glass of water (x, x, x).

Resveratrol is a polyphenol compound that helps to protect the body and is similar to an antioxidant. It is derived from red grape skin, but also can be derived from other red berries and peanuts. Pure resveratrol supplements can help control the symptoms of morning sickness and HG with minimal side effects.

Pregnant women who are taking blood thinners should speak with their doctor prior to taking this supplement to prevent a negative interaction. The recommended dosage is 1 capsule taken once daily with a meal. The supplement is more effective when taken in combination with a grape seed extract or with fresh grapes (x, x, x).

Green tea has many benefits. It can help with weight loss, clear skin and even reduce stress. Another benefit green tea has it that it helps to reduce morning sickness and HG symptoms. Green tea extract contains caffeine, which has proven to help reduce the urge to vomit and the feeling of nausea that often comes with pregnancy.

Pregnant women should take care not to consume excessive amounts of green tea during pregnancy.

Green tea does contain caffeine, which can create health risks during pregnancy as well as have a negative effect on sleep patterns. Green tea can also limit the amount of folic acid your body absorbs, which is essential during pregnancy. The recommended dosage is no more than two capsules taken twice a day. It is important that you only consume green tea extract supplements in three-month intervals and in cooperation with your doctor (x, x, x).

Peppermint can be consumed or used as aromatherapy to treat various conditions including morning sickness, nausea and hyperemesis gravidarum. The leaves of the peppermint plant are what is used as an effective treatment. The plant itself is a mix between a spearmint plant and a water mint plant. The oil from the leaves can be used to create an aroma that helps to ease the senses and reduce vertigo, hunger, dizziness, vomiting and more. You can also take it orally to help combat upset stomach, morning sickness and other symptoms of HG. There are no side effects of consuming peppermint other than growing tired of the taste over time. The recommended dosage is 700 mg taken twice daily (x, x, x).

Unfortunately for some women, the pregnancy journey becomes much more difficult due to hyperemesis gravidarum. The symptoms can reduce quality of life to the point where attending work, social events or even managing the smallest tasks are impossible. HG can even affect families and relationships on a deeper emotional level due to the strain involved with poor health, constant vomiting and extreme nausea.

HG can often result in weight loss, dental issues and general fatigue. Children who are born to a woman who has suffered from hyperemesis gravidarum during her pregnancy tend to be underweight or born early. While there are no sufficient studies that show the long-term effects of the HG on the child, some reports exist. Less than 10 percent of women who suffered from hyperemesis that caused extreme weight loss have reported children that have gone on to exhibit behavioral problems or other psychological issues.