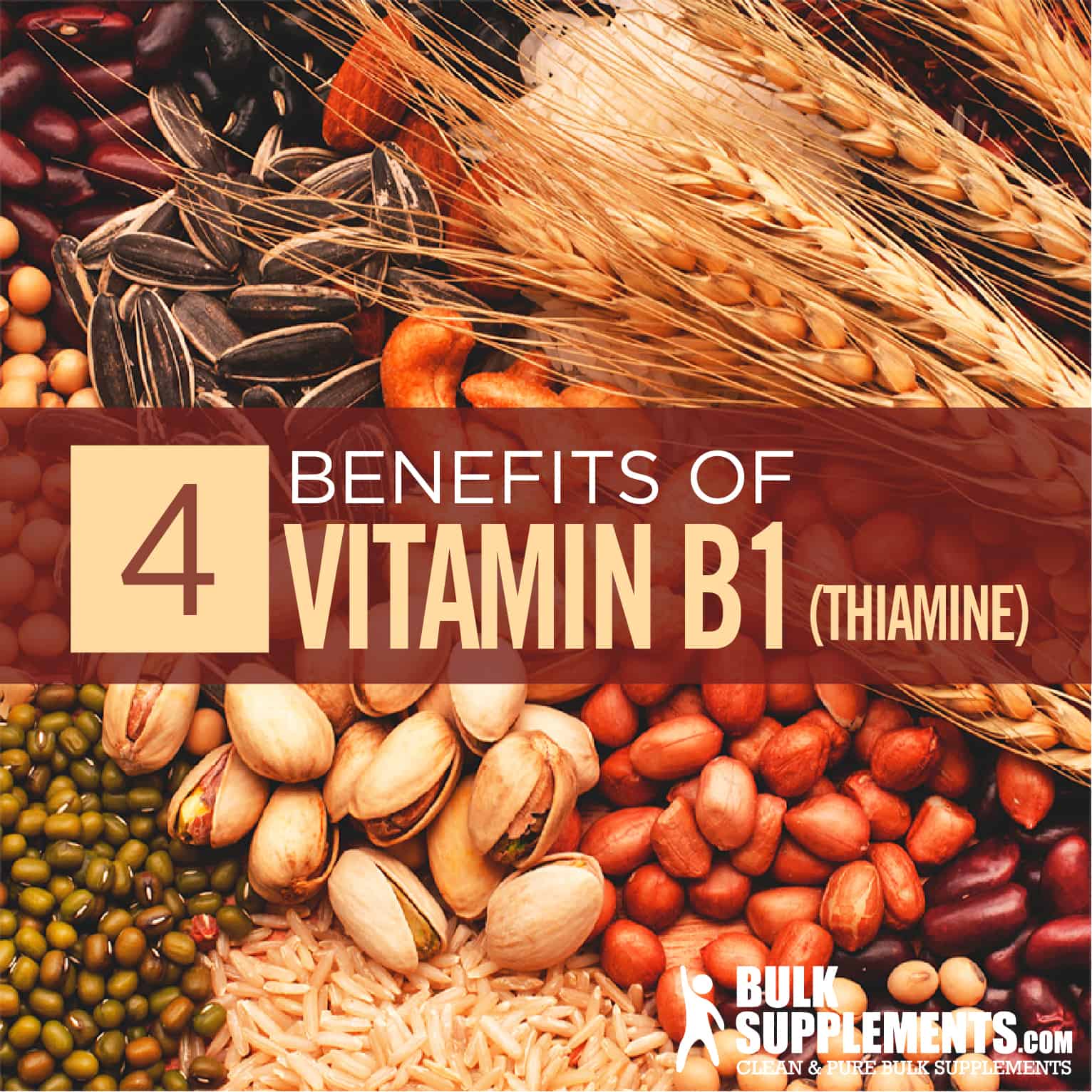 What is Vitamin B1 (Thiamine)?

Vitamin B1 is the first B vitamin that scientists uncovered, and the body needs it for several purposes. These include:

In addition to maintaining a healthy body, thiamine can be of assistance when the body suffers from digestive problems, metabolic disorders, dysmenorrhea or the threat of kidney damage.

Cooking foods that naturally contain vitamin B1 may actually destroy the vitamin. Manufacturers commonly fortify some of their products with vitamin B1 to enhance its nutrition content. United States residents get about half of their vitamin B1 naturally from whole foods, and half of their vitamin B1 intake comes from fortified grains and cereals. Some athletes even use thiamine as a natural supplement to improve performance and recover from strenuous workouts.

Vitamin B1: A Water-Soluble Vitamin

Vitamins come in two groups — water-soluble and fat-soluble. Water-soluble vitamins dissolve in water when they enter the body. B vitamins are all water-soluble, including vitamin B1. Although our liver stores some vitamin B1, it has a short storage life. People need a continuous, daily supply of vitamin B1 in order to maintain good health (x, x).

Some research suggests that 90-day thiamine supplements relieve pain associated with menstruation in young women (x). When put together with other vitamins, vitamin B1 may also lower the risk of developing cataracts (x). Additionally, studies show that ingesting high doses of thiamine decreases signs of kidney damage in people with type 2 diabetes. Doses were set at 100 mg / 3 times daily (x).

Studies show that exercise increases the body’s need for vitamin B1. Vitamin B1 boosts energy production and tissue repair, which are both necessary after intense exercise. In a recent study, researchers discovered that when athletes consumed less thiamine, performance diminished (x, x). In another scientific trial, athletes that supplemented with 100 times the recommended daily allowance of vitamin B1 were less fatigued immediately following a workout.

In one study, patients took either thiamine or a placebo to measure cognitive function. Though these studies did not provide conclusive evidence, there are possibilities for thiamine’s use in treatment for Alzheimer’s. However, additional research is necessary to confirm its potential (x).

Thiamine hydrochloride (Thiamine HCL) is a synthetic version of thiamine. It absorbs water easily from its surroundings, making it hygroscopic (x).

Vitamin B1 in Food

Many cereal products are fortified or enriched with vitamin B1, including white flour and white rice. One serving of fortified breakfast cereal contains approximately 1.5 mg of thiamine, which satisfies the daily recommended amount (x). Some foods with significantly low amounts of vitamin B1 include apples, chicken, cheddar cheese and milk.

Heating and processing our foods reduces the thiamine content. The ingredients of bread contain approximately 25 percent more thiamine than in a baked loaf of bread. And when vegetables are cooked, much of the thiamine gets lost in the cooking water (x).

Signs of Vitamin B1 Deficiency

Some people have a higher need for thiamine. For example, those who are pregnant, breastfeeding or involved in strenuous physical activity may be marginally deficient in thiamine (x). Older adults may also lack vitamin B1, as well as adolescents that are in a growth spurt.

A moderate vitamin B1 deficiency can show up in these symptoms:

A severe thiamine deficiency, however, can result in beriberi. This disease, which may affect many systems in the body, has a variety of forms.

Beriberi is the result of a severe vitamin B1 deficiency. It’s diagnosed based on symptoms that show up in the blood and urine, including low thiamine levels and high levels of lactic acid. Beriberi is treated by giving patients thiamine supplements. These can be administered orally or intravenously. With proper treatment, the symptoms of the disease usually improve within a few weeks.

Beriberi is common in places with poor hygiene. It was a common illness in ancient Asian history and has become more common in western cultures with increased food processing.

Beriberi has been divided into different categories, depending on which bodily system is most affected (x).

This variation of beriberi affects one or more peripheral nerves, causing numbness or weakness. One symptom of dry beriberi is a sensation of feet burning. Other symptoms include exaggerated reflexes, weakness in arms and legs, muscle pain and tenderness.

Wet (or cardiac) beriberi symptoms include rapid heart rate, severe swelling, difficulty breathing and, in some cases, congestive heart failure. Symptoms may also include the neurological symptoms of dry beriberi as well.

Korsakoff’s psychosis may manifest itself with symptoms such as confusion, apathy and profound memory impairment.

The absence of vitamin B1 can impair certain metabolizing enzymes in the body. These impairments can lead to a buildup of lactate and a condition called lactic acidosis. Lactic acidosis symptoms include nausea, vomiting and severe abdominal pain. This condition is often called gastrointestinal beriberi.

Vitamin B1 is present in multivitamins and B complex vitamins, but also comes as its own supplement. It comes in children’s chewables, liquid drops, tablets, softgels and lozenges. In cases of severe deficiency, though, it may be given intravenously.

A daily dose of 50 to 100 mg is often taken as a supplement. Taking vitamin B1 appears safe in recommended doses (x, x). However, it is always important to speak with your health professional before including new supplements into your regimen.

Daily recommendations for dietary use:

Vitamin B1 is great for the body, but it is possible to have too much of a good thing. Overloading on vitamin B1 supplements can cause excessive sweating, nausea, restlessness, itching, rash and blue lips. Moreover, serious side effects may include chest pain, shortness of breath and coughing up blood. Again, to avoid interactions with medication, it is best to talk to a health professional.

Vitamin B1 may interfere with:

In conclusion, water-soluble vitamin B1 (thiamine) is an important part of a healthy body. Vitamin B1 is very fragile, so it’s a good thing this vitamin is present in such a wide variety of whole foods.

Thiamine is an essential vitamin, and we need its beneficial powers each and every day. Not getting enough thiamine is a problem in certain global regions. In other places, though, alcohol abuse and certain medical conditions are the main cause of thiamine depletion.

If you need a boost of this helpful vitamin, it’s available as a supplement in a variety forms. It can be produced synthetically and it is also included in packaged foods. Getting too much thiamine can be toxic and getting too little can be deadly, however. All in all, though, vitamin B1 is usually playing its balanced part in the background quite well. It helps metabolize proteins, use carbohydrates and also provides support to the nervous system. It’s useful for a variety of special needs and illnesses, and when we treat its fragile properties with care, vitamin B1 has its place in our daily diet.