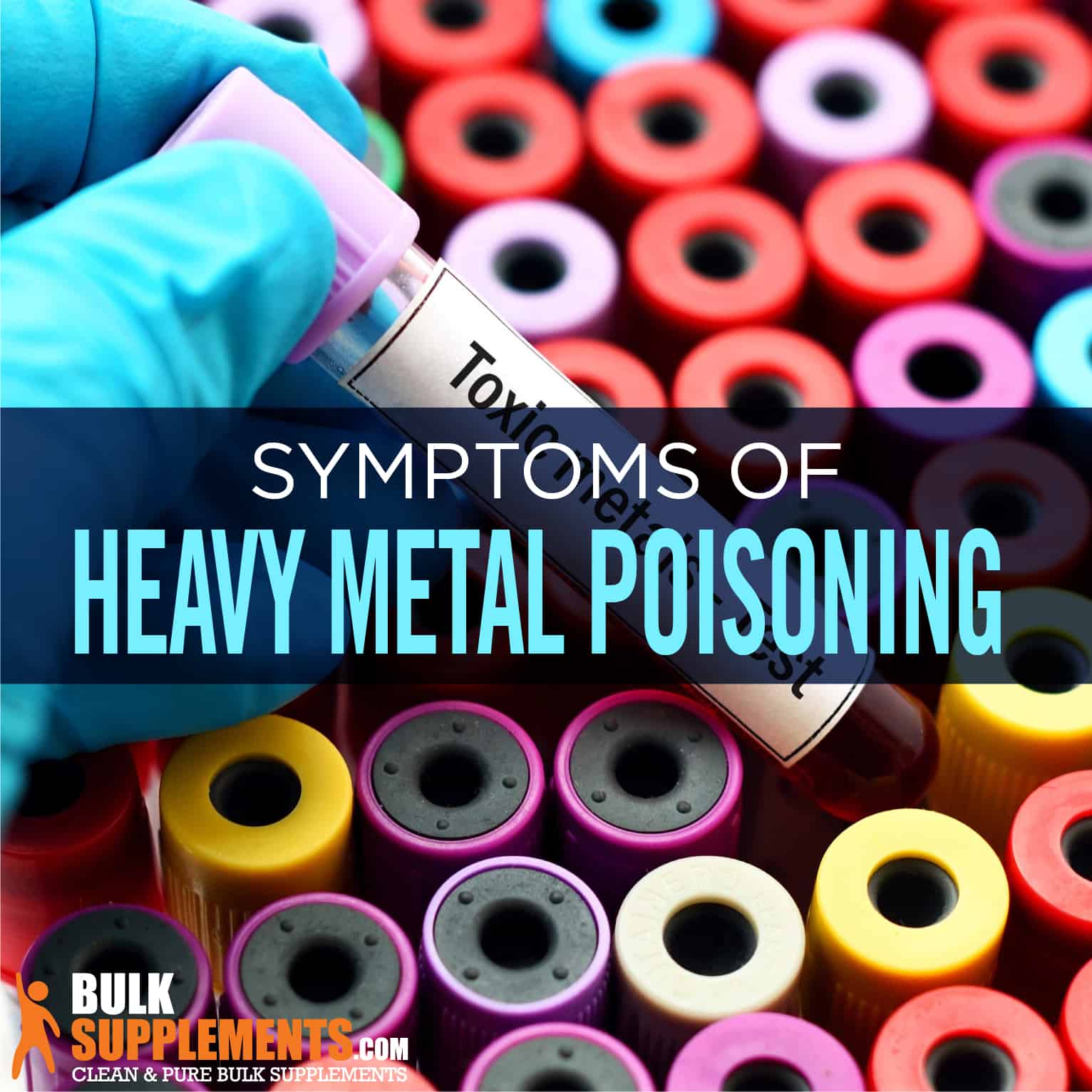 What is Heavy Metal Poisoning?

Heavy metals such as lead, mercury, cadmium and arsenic are everywhere. They are found in everyday cosmetics, water and even in food (x). The human body also requires some of these metals like iron, copper and zinc for it to function appropriately as long as they’re present in safe amounts. Although it’s inevitable for humans to consume them in some way, heavy metals may be toxic and cause serious health complications. Heavy metal poisoning is when they build up in huge quantities in the body’s soft tissues (x).

Heavy metal poisoning is not very common in the United States. Cases usually develop when people have been in contact with toxic amounts of heavy metals over a long period of time. Although there are several different types of heavy metals that exist, there are a handful that may cause toxicity most often such as mercury, arsenic and cadmium.

Mercury occurs naturally in nature and it has several different chemical forms such as vapor or salts and the body absorbs them differently. It is a commonly known cause of heavy metal toxicity. Usually if someone inhales mercury as a vapor, it causes the most damage to the brain and salts cause damage to the digestive lining and the kidneys (x).

Arsenic is a component of the earth’s crust and it is also present in water, air, food and soil. In most cases, people get arsenic poisoning through food and water. Patients may also inhale dust that contains arsenic (x). While mercury may target specific organ systems, arsenic damages almost all of them because it targets a wide range of enzyme reactions (x).

Cadmium is a metal in the earth’s crust, extracted from mining and producing metals like copper, lead and zinc. It is present in the air, water, soil and food from human activities like burning waste and fossil fuels (x).

The symptoms of heavy metal poisoning may vary based on the type of metal. Some of the most common toxins are mercury, cadmium and arsenic.

Mercury is a silver-white type of heavy metal that takes a liquid form at room temperature. It naturally grows in the environment and is one of the elements in the earth’s crust. Typically, it exists in inorganic compounds and salts instead of its liquid form. This metal is often in electrical switches and thermometers.

When it comes in contact with the human body, mercury creates long-term adverse effects in the lungs, kidneys and the brain. Some of the most common signs of mercury poisoning are fatigue, memory loss, headaches, confusion, irritability and depression. Another complication from prolonged mercury exposure is erethism, or mad hatter syndrome. Erethism is a neurological disease that impacts the entire central nervous system, causing severe behavior and personality changes such as delirium and hallucinations (x).

Arsenic is a natural element in the earth’s crust. This substance is everywhere including the air and soil, which means it can infect food and water as well. Pesticides may also contain arsenic.

Some of the most common signs of arsenic poisoning are drowsiness, headaches and confusion. Patients may also suffer more severe symptoms like seizures, encephalopathy (brain damage), peripheral nerve damage, swelling and gastroenteritis (x). Long-term exposure to this substance can change the way cells communicate with each other and interfere with their ability to function properly. High arsenic levels can also contribute to conditions like cancer, interstitial lung disease and diabetes.

Cadmium is typically a component of zinc and it is also present in the earth’s crust. Manure and pesticides may also contain cadmium, as well as storage batteries, vapor lamps and electroplating processes. Since are rarely exposed to it, even trace amounts can cause toxicity from factors like food or water.

Some of the most common signs of cadmium toxicity are headaches, vomiting, nausea, fever, stomach pain and diarrhea. Long-term exposure to cadmium may cause dyspnea, tachycardia, emphysema, anemia and pulmonary edema (x).

Patients get heavy metal poisoning if toxic metals accumulate in the body, mostly from long-term exposure. These metals replace essential minerals that the body needs to function and cause damage to different organ systems. The body needs some of these metals, such as zinc, iron, manganese or copper. But in large amounts, they can be detrimental and mercury, arsenic and cadmium cause damage the most often. The causes vary based on the type of heavy metal, but most patients contract it from industrial exposure, air or water pollution, ingesting paint, contaminated food, medicine or cookware with improper coating (x, x).

Patients may get mercury poisoning from environmental factors and from other types of metal that humans may come in contact with (x). These causes may include creating thermometers, x-rays, vacuum pumps and incandescent lights. Mercury from broken thermometers can also cause toxicity. It may also be present in other products like paint, teething powder, calomel, batteries and mercuric fungicide, used to wash diapers. People may also contract mercury poisoning from contaminated food—specifically fish—and water.

The most common cause of arsenic poisoning is groundwater contamination. Since arsenic is a natural metal in the earth, it can easily blend in water under the ground. Aside from that, industrial runoff can also seep through water pipes (x). Other causes of arsenic poisoning include topical cream for various skin conditions, medications, herbicides, pesticides, insecticides and rodenticides. Patients may also suffer arsenic poisoning as a result of manufacturing enamels, paint, metal and glass.

Most of the time, cadmium is a by-product of zinc, copper and lead production (x). It may also be included in cigarettes, metal plates, batteries, plastic products and food.

The primary way to prevent heavy metal poisoning is to avoid exposure to these heavy metals. Treatment depends on the symptoms the patient experiences. Doctors may need to pump the patient’s stomach to get the metals out of the body. Chelation therapy is also an option for advanced cases. Doctors inject use a needle to inject chelating agents into the blood. Then the chelating agent sticks to the heavy metals and the body flushes them out in urine with the toxins attached. However, chelation can be complicated and it may not completely remove all types of metal (x). Common drugs for chelation include:

Just like any condition, there are also several dietary supplements that may be able to help detoxify the body and get rid of toxins. However, supplements alone will not remove heavy metals from the body. Instead, natural detoxifiers may be effective in combination with other forms of treatment. Always consult a doctor before using supplements and follow all medical advice.

Milk thistle is a popular elixir for the liver and research shows that it may remove toxins from the liver. It may even have the ability to cleanse the liver and eliminate heavy metals, specifically cadmium (x). The recommended dosage for milk thistle extract powder as a supplement is 250 mg a day, unless a doctor advises a different dosage.

Magnesium may also help detoxify the cells. Natural detoxification because certain minerals can build up in the cells and cause damage. Magnesium may be an effective detoxification tool. For example, it can help cleanse the digestive system and act as an antacid, potentially relieving heartburn and constipation. As a supplement, the recommended dosage for magnesium citrate powder is set at 4,400 mg a day mixed in liquids. Consult a doctor before taking this supplement.

Vitamin B6 is a compound that plays an important role in liver function, energy metabolism, neuron communication and blood circulation. There are several health conditions associated with vitamin B6 deficiency, including mood changes, migraines, depression and chronic pain. However, research also claims that vitamin B6 deficiency may interfere with the body’s ability to tolerate heavy metals so that they may cause poisoning more easily (x). The recommended dosage for vitamin B6 (pyridoxine HCL) powder is 50 mg once or twice a day without exceeding 125 mg in a day. Consult a doctor for approval for taking vitamin B6 supplements.

Some metals are natural components of the human body and play an important role in health, such as zinc, iron, manganese and magnesium. However, in large amounts, these metals can accumulate in the body and cause damage, resulting in heavy metal poisoning. The most common metals that cause toxicity are arsenic, mercury and cadmium.

The most common causes are water and air pollution, industrial exposure and contaminated contaminated food. These metals can replace minerals that the body needs to be healthy. Signs of heavy metal poisoning include fatigue, headaches, confusion, nausea and vomiting. However, they vary depending on the type of metal. Treatment may require doctors to pump the patient’s stomach or use chelation therapy. Chelating agents attach to the metals and then the body eliminates them both in urine. There are also supplements that may help detoxify the body and possibly eliminate heavy metals. However, supplements alone are not designed to treat heavy metal poisoning or any other medical condition. Instead, they aim to improve overall health. Consult a doctor before adding supplements to a health regimen.