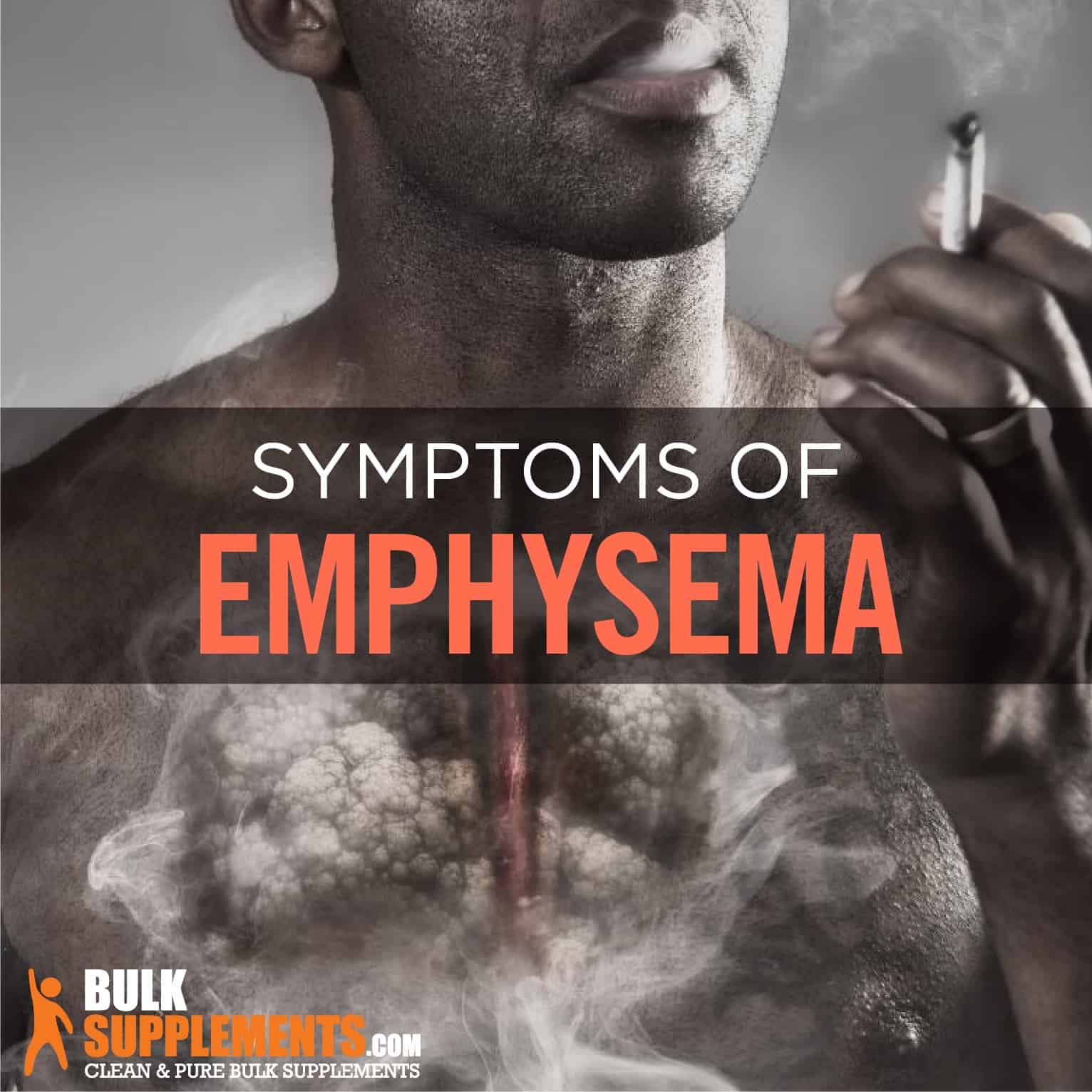 Emphysema is a disease that affects the tissue in the lung (x). The major areas it affects are the air sacs or alveoli, which gradually take damage. It is one of the conditions that primarily make up chronic obstructive pulmonary disease, or COPD (x).

What Are the Stages of Emphysema?

Similar to cancer, COPD is categorized by stage (x). Stage one patients are “at risk” or in a “mild” stage. In this stage there is at least 80 percent lung capacity. Being out of breath and feeling generally out of shape are common states in this stage, though anyone at risk should see a doctor for a spirometry test or screening.

Every stage after stage one of emphysema is an advanced emphysema stage. The term “advanced” implies that the emphysema condition has worsened.

Stage two refers to conditions where the lung capacity of the individual falls between 50 and 80 percent. The symptoms in this stage include increased coughing with limitation of the airways and the presence of phlegm.

Stage three COPD is the “severe” stage, and occurs when the lung capacity falls to between 30 and 50 percent. There is severe restriction on the patients’ ability to be active thanks to increased fatigue.

The final stage is stage four. This is the ‘very severe’ or ‘end stage’. This is characterized by lung capacity falling below 30 percent and very limited tolerance of activity and trouble breathing.

Though called ‘end stage’ it does not necessarily mean that death is imminent — many people who stick to a healthy diet and lifestyle and follow medical advice live well, with a good quality of life.

There are a wide range of symptoms relating to the breathing system in patients with emphysema. For example, frequent lung infections, wheezing, phlegm, coughing, chest pain and the inability to breathe freely are all rather common (x).

Due to lowered lung capacity, blood oxygen levels may be low, which can result in cyanosis, or blue lips and skin. If this is the first time you are experiencing this, then speak to your doctor. If it comes on all of a sudden, seek medical attention immediately as this can be a sign of a severe condition (x).

End stage emphysema encompasses the other symptoms of lesser stages, but is particularly marked mostly by dyspnea. Dyspnea is shortness of breath even when one is at rest (x).

Hyperinflated lungs are caused by the respiration system being blocked, stopping air that has been taken in from being released. This is commonly seen in patients who have COPD (x).

The direct cause of emphysema in developed countries is through smoking tobacco. The damage done to the lungs by cigarette and other tobacco products is a leading cause of COPD as continued smoking accelerates the disease (x).

In developing countries, COPD and emphysema is often caused by inhaling fumes from fuel burning or heating in un-ventilated spaces (x).

AAT deficiency is a genetic protein deficiency which can cause COPD. It also makes the individual more at risk of developing emphysema from the other factors mentioned above.

COPD (x) can be detected early via medical tests. It is important to obtain a diagnosis as soon as possible, as it might be difficult for a person who has waited too long to visit the doctor to recover from the disease, even with adequate treatment.

However, an emphysema condition detected as early as possible can be effectively treated to ensure a longer and better quality life. It is also important to note that it is a heritable disease. If emphysema or COPD is present in the family history, any symptom relating to it should be taken seriously and the necessary laboratory tests should be carried out.

Can You Die from Emphysema?

Over 251 million cases of COPD were reported globally in 2016, and in 2015 there were over 3.17 million deaths. This means that it accounted for 5 percent of all deaths globally that year. Over 90 percent of those COPD deaths occur in low- and middle-income countries (x).

While it is widespread and can be deadly without treatment, those in highly developed countries who have access to treatments and are willing to make the required lifestyle and medical changes can manage the condition.

Emphysema cannot be reversed, but many medical procedures have been developed to treat COPD. These medical procedures help to support the necessary lifestyle changes and symptom management that the patients themselves must undertake. No amount of medical intervention can help treat emphysema and COPD if the patient does not follow medical advice.

Much of the treatment of emphysema is symptom management and prevention of other diseases and infections that could further damage the respiratory system (x).

These are inhaled directly into the lungs, or taken orally. They relax and open the air passages and ease breathing. Inhaled as aerosol sprays or taken orally, bronchodilator medications may help to relieve symptoms of emphysema.

Steroid inhalation can help to relive the symptoms of asthma and bronchitis. These can cause long term side effects when used for too long such as weakened bone structures, increased blood pressure, diabetes and cataracts.

Lung and chest infections are commonly experienced by patients with COPD. These are treated with antibiotics.

Lung reduction surgery can remove some of the damaged tissue whereas complete transplant is an option for some patients.

Some natural remedies for symptom support are available and can provide some benefit to patients with COPD.

Research has shown that people with emphysema often have a lower level of vitamin D. This means food rich in vitamin D or a supplement can be consumed to address it (x).

Magnesium has been found to have a bronchodilating effect. To increase your intake of magnesium, kale, avocado, banana and nuts are all good food sources. Additionally, magnesium supplements are available.

Vitamins A, C, and E — these vitamins are important antioxidants that help the body break down food and release the needed carbon dioxide to the body’s exterior. Vegetables and fruits are good sources of these vitamins. If a dietary source is not enough, a supplement is a viable option (x, x, x).

Panax ginseng was studied in 2014 and appeared to inhibit processes related to COPD pathogenesis and can be used in COPD treatment (x, x).

Emphysema is a disease which is part of the umbrella term COPD, or ‘chronic obstructive pulmonary disease’. It affects the respiratory system and results in difficulty breathing, excess phlegm and coughing. There are several possible causes of emphysema, but the main cause is inhalation of toxic gasses like cigarette and tobacco smoke. The use of vitamin and mineral supplements to support overall health can make a big difference. There is no reversal of emphysema, but the symptoms are manageable.