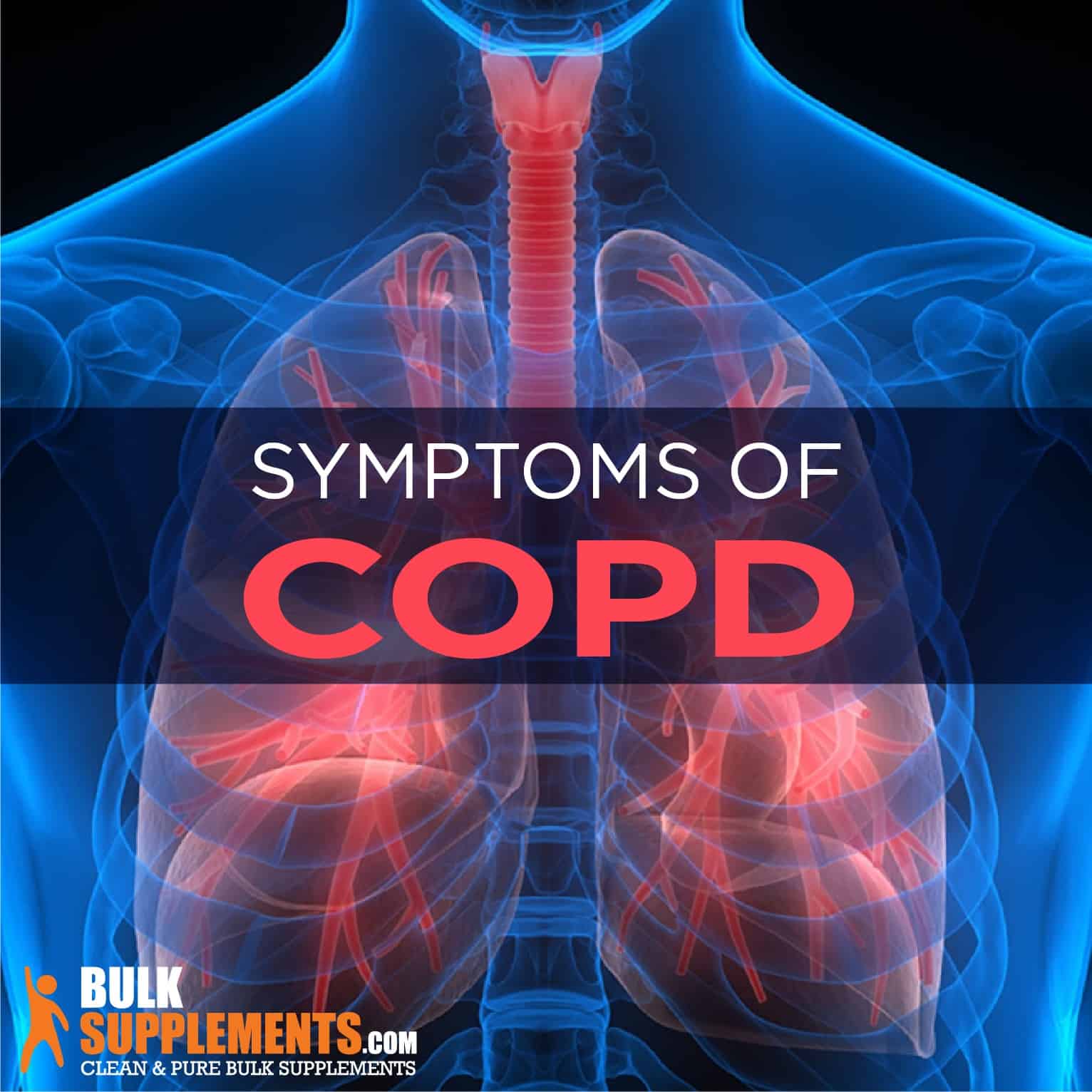 Chronic obstructive pulmonary disease (COPD) is an umbrella term for any of a number of chronic inflammatory lung diseases often characterized by progressive breathlessness. These diseases specifically include chronic bronchitis, refractory (non-reversible) asthma and emphysema. Chronic obstructive pulmonary disease affects millions of Americans and is the third leading cause of disease-related deaths in the United States (x). Although there is no cure yet, COPD is often treatable and preventable. In fact, a person with this disease can enjoy a quality life and minimized risk of other related conditions if the disease is properly managed.

Most COPDs result from inhaling unhealthy toxins or poisons. Some causes are genetic, while others are age-related.

The primary cause of COPD is cigarette smoking or exposure to tobacco smoke. In fact, smoking is the leading cause of COPD in the United States (x). Ninety percent of Americans with COPD are smokers or former smokers (x). Cigarette smoke causes irritation and inflammation in the lungs. The body then releases white blood cells to the area. These white blood cells then release enzymes that cause damage to the lung tissue. And while the body’s defense system is capable of fighting these enzymes, this defense can get stunned by tobacco smoke, leading to COPD (x, x). Exposure to second-hand smoke (air from other people smoking) can also cause COPD in adults (x).

The symptoms of COPD are similar in both smokers and non-smokers. However, newer smokers with COPD are likely to have milder symptoms, unlike the current and former smokers (x). But what is concerning is that symptoms associated with COPD don’t show unless significant lung damage has occurred.

COPD can also be as a result of individuals inhaling dust, fumes and chemicals for a long period. This can happen at their places of work due to industrial air pollutants. Examples of these harmful materials in the workplace include carbon monoxide, ammonia and asbestos (x). Similarly, homes contain toxins like smoke, spray products, molds and cleaners. Fumes from burning charcoal or wood used in cooking can also cause a person to have COPD after long periods of exposure. Therefore, avoiding these hazardous chemicals is the best way to reduce the risk of COPD. One way to do this is to ensure good ventilation in workplaces and homes, which can provide good circulation of clean air that will then minimize the chances of breathing in these toxins (x).

Chronic obstructive pulmonary disease has a strong genetic component. In rare cases — about five percent — individuals with COPD may have a defect in their DNA called alpha-1 antitrypsin deficiency (x). Individuals with this condition have a lower-than-normal level of alpha-1 antitrypsin, a blood protein that protects the lungs from irritation that results from breathing in toxins. Deficiency in alpha-1 causes the lungs to degenerate. This condition also affects the liver. Since alpha-1 is a genetic disorder, it can be passed from parents to their kids (x, x).

Age is also a key risk factor for COPD. In fact, research shows that most people with COPD began to show symptoms at 40 years (x, x). Though rare, COPD can also occur in younger people, especially if there is a predisposing health issue like alpha-1 antitrypsin deficiency (x, x).

Individuals with active asthma are likely to develop COPD. In fact, a study published in the July issue of Chest showed that people with asthma were at significantly high risk of chronic lung conditions later in their life (x). According to another study, the existence of asthma aided in predicting COPD in non-smokers (x).

Other Health Problems Connected to COPD

The comorbid condition is common in individuals with COPD in comparison to those with other medical disorders. Specifically, some of these conditions include diabetes, high blood pressure, arthritis, high cholesterol levels, osteoporosis and sleep apnea (x).

High altitudes also pose a risk to an individual with COPD. Because there is less oxygen available to breathe at high altitudes, COPD patients are likely to experience increased symptoms (x).

Signs and Symptoms of COPD

Early warning signs of COPD include shortness of breath and a lingering cough (x). But when COPD begins to show severe symptoms, it becomes a life-threatening medical emergency. More severe symptoms include cyanosis, respiratory distress, peripheral edema and hyperinflation.

Symptoms may vary depending on whether the COPD is chronic bronchitis or emphysema, the two main types of COPD. Chronic bronchitis is characterized by day-to-day cough and mucus production, while emphysema symptoms include wheezing and daily mucus. The severity of each condition also varies with different people (x). The common symptoms of COPD are:

Coughing allows the body to get rid of mucus and irritants like dust and pollen from the airways. It is also how the body clears other sections of the lungs. Thus, chronic cough is the primary symptom of COPD. And if a cough persists for up to a year or two, it could be a sign of one of the components of COPD — chronic bronchitis.

People with COPD cough up yellow mucus. Also, the cough is worse during early mornings or after smoking. Other symptoms are observable as COPD progresses (x).

It is a whistling sound that is heard when air is forced through narrow air passages during breathing. This is mainly a result of excess mucus that obstructs the airways and muscular tightening that narrows the airways further. It can also happen due to asthma or pneumonia (x).

Referred to as dyspnea, shortness of breath occurs when airways in the lungs are narrowed. Inflammation and damage often cause this narrowing of airways. This symptom is highly observable during intensified physical activity. Shortness of breath makes simple tasks like bathing, dressing and walking challenging (x). Also, people with COPD might find it difficult breathing because of their narrowed airways.

People with COPD tend to have a weak immune system. This means that it is difficult to discard pollutants, dust and other lung irritants. This puts people with COPD at a greater risk of contracting infections like flu, colds and pneumonia (x).

Difficulty in breathing is one sign of COPD. When you are having difficulty breathing, it becomes harder to get enough oxygen into the bloodstream and muscles. Without adequate oxygen, the body slows down, and a feeling of exhaustion and tiredness sets in (x).

People who have had COPD for a long period can experience loss in weight. This happens in the later stages of COPD. Because COPD patients have difficulty breathing, their bodies need to exert more to breathe normally. Thus, the body burns more calories than it is taking in to provide the extra energy to facilitate breathing and movement of air in and out of the lungs. Weight loss could result from this burning of extra calories (x).

Swelling in the Ankles

Lung damage can result in the swelling of the feet and ankles in individuals with COPD. Throughout COPD, the heart will have to work extra hard to pump blood to the injured lung.

COPD causes the chest to feel tight due to an increase in mucus buildup in the lungs. It can also be a result of narrow and blocked airways associated with individuals with COPD (x).

An individual with chronic obstructive pulmonary disease may develop a slight barrel chest. It occurs once the lungs become chronically overinflated with air, which forces the rib cage to stay partially expanded (x). This happens in the later stages of the condition.

This constant clearing is due to excessive mucus (x).

COPD diagnosis involves analysis of the symptoms, a physical exam and diagnostic test results. A stethoscope is used during the physical exam to listen to the lungs during breathing. But if a doctor requires a complete picture, the following tests can be done:

This test assesses the functioning of the lungs. The patient takes a deep breath and then blows into a tube connected to the spirometer.

These are imaging tests. They provide a detailed visual look at the patient’s lungs and blood vessels.

This blood test is used to determine the patient’s blood oxygen, carbon dioxide and other vital levels.

There is no cure for COPD yet. Therefore, treatment of COPD is aimed at easing the symptoms, preventing future complications and slowing its progression.

Bronchodilators are the medications used to relax the muscles of the airways and also widen the airways to allow for normal breathing. They are taken through a nebulizer or an inhaler. Glucocorticosteroids can also be added during this medication to mitigate inflammation in the airways (x).

The patient receives supplemental oxygen if their blood oxygen level is too low. A mask or nasal cannula is used. The patient can also be issued with a portable unit to allow them to move around with ease (x).

Doctors prescribe surgery only in rare COPD cases where other forms of treatment have failed. In most cases, it is applied in severe emphysema. One type of surgery is bullectomy, which involves the removal of large, irregular air spaces from the lungs. Another type of surgery is lung volume reduction, where the upper lung tissue is removed. A lung transplant can also be done by replacing it with a healthy lung from a donor (x).

Several lifestyle changes can also help to provide relief from COPD as well as reduce symptoms. They include:

While there is no cure for COPD yet, steps can be taken to manage the symptoms and control the progression of the disease.

Supplements for respiratory health include:

This supplement helps in detoxifying the body, allowing toxins and waste products to be excreted out of the cells easily. If you plan to take this dietary supplement, take 1,000 mg to 1,300 mg of methylsulfonylmethane powder four times per day, or as directed by a physician.

Curcumin natural turmeric extract powder is to be taken in one dose of 1,000 mg or less per day, depending on the intended effect. Take it with water and a meal.

It is recommended that quercetin dehydrate powder be taken in servings between 250 mg (1/4 tsp) and 500 mg (1/2 tsp). Take the supplement three times a day depending on the intended effect.

Pure N-acetyl L-cysteine powder is an ideal supplement for patients with bronchitis. NAC reduces shortness of breath in patients with air passage swelling as a result of exposure to harmful gases.

As a dietary supplement, take 500 mg (scant ¼ tsp) of cat’s claw extract powder once to twice daily, or as directed by a physician.

The suggested serving size for potassium orotate powder is 400 mg (level 1/8 tsp) to be taken daily. Due to potassium toxicity, the use of a milligram scale is strongly recommended.

Other Supplements for COPD

COPD is a respiratory condition that makes it difficult for you to breathe. The main trigger for this condition is smoking. In fact, one of the best ways to stay away from COPD is to avoid smoking. But if you are a smoker, quitting smoking can also help you control this condition. Be sure to review the causes and symptoms of COPD discussed above so that you may have a better understanding of the condition.