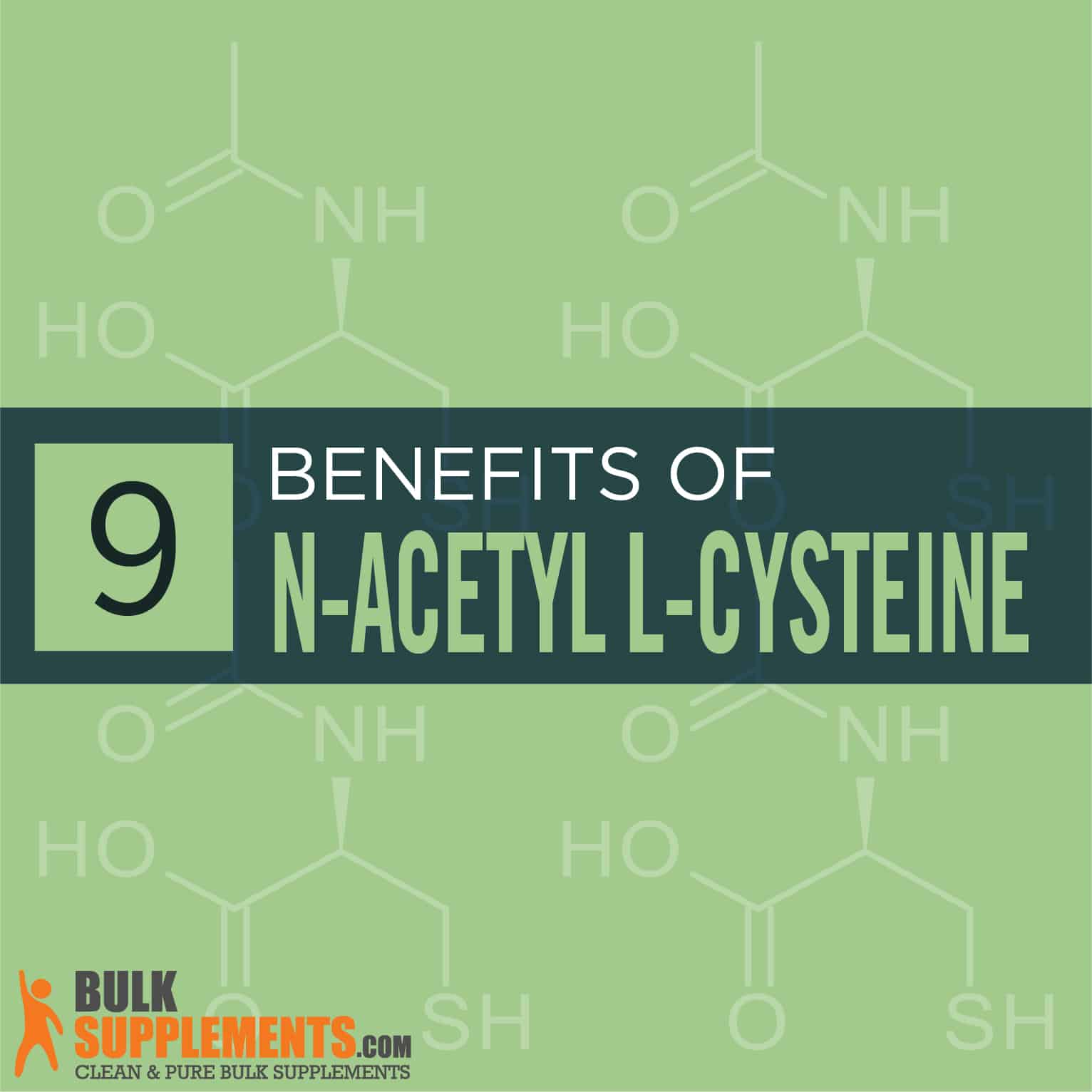 What is N-Acetyl L-Cysteine?

N-acetyl L-cysteine, more commonly known as acetylcysteine, comes from the amino acid L-cysteine. This amino acid is semi-essential and is generated from other amino acids in the body. If a person’s intake of methionine and serine is extremely low, then cysteine converts into an essential need. Naturally, cysteine can be found in food that is high in protein, such as eggs, turkey, yogurt, chicken, legumes, cheese and sunflower seeds (x).

N-acetyl L-cysteine (NAC) is the supplement form of cysteine. Taking N-acetyl L-cysteine has a range of health benefits for both direct and therapeutic use. It is frequently employed as a treatment for patients who have overdosed on paracetamol and it has proven effective in reducing the thickness of the mucus of cystic fibrosis patients. NAC comes in several forms — as a mist, an oral supplement, or an inject-able supplement. In some cases, N-acetyl L-cysteine is given topically like in dental situations to reduce plaque or it is used to treat dry eyes.

NAC offers a range of benefits in its natural form and as a supplement. It helps to get rid of harmful free radicals from the body and helps maintain proper brain function. There are many other benefits to supplementing with NAC such as (x):

N-acetyl L-cysteine plays a vital role to detoxify the kidney and liver. It has been proven to help combat the negative side effects of various pharmaceuticals as well as combat toxins from the natural environment (x). Patients who have overdosed on certain drugs such as Tylenol or paracetamol can be treated with NAC to limit liver and kidney damage (x).

N-acetyl L-cysteine paired with glutamine and glycine plays an important role in the replacement of glutathione. This is one of the most important antioxidants that your body produces naturally. Glutathione helps to neutralize the free radicals that cause damage to various tissues and cells in the body. It helps boost your immune system and may even increase your lifespan (x).

Glutamate is the most important neurotransmitter in the brain. It is essential in order to have a normal level of brain function. If there is too much glutamate in the brain but not enough glutathione, the brain is in danger of becoming damaged (x). N-acetyl L-cysteine helps to ensure that the level of glutamate remains steady by regulating those levels. Properly regulating glutamate levels may help reduce addictive behaviors such as obsessive-compulsive disorder (OCD). It has also shown promise in reducing the symptoms of schizophrenia, depression and bipolar disorder (x, x). In the case of those addicted to brain-altering substances, NAC has been proven to help reduce the severity of withdrawal symptoms (x).

N-acetyl L-cysteine helps guard against several illnesses that develop from oxidative stress. One of the main causes of infertility is oxidative stress (x). Many infertility issues in men can be linked to insufficient antioxidant levels. Antioxidants are extremely important when it comes to reducing the effects of oxidative stress in the reproductive system. When the body is low in this vital amino acid, it can result in infertility (x). Studies have proven that supplementing with a regular dose of NAC and selenium has a positive effect on fertility (x). Women who suffer from polycystic ovary syndrome (PCOS) often have trouble with fertility. Supplementing with NAC helps stimulate ovulation (x).

As we age, our bodies produce less antioxidants that help prevent cell damage. NAC is an effective way to supplement these vital antioxidants externally to reduce signs of aging, either orally or topically (x). It may help reduce acne, brighten and firm the skin or encourage skin cell regeneration.

NAC supplements help boost brain health by regulating glutamate levels in the body. This essential neurotransmitter is tied to memory, learning and behavior. It also helps to decrease oxidative damage to the brain cells, which is a result of the aging process (x). Patients who suffer from various memory issues or brain ailments may benefit from supplementing with NAC (x). Oxidative damage severely affects people who suffer from Alzheimer’s disease and Parkinson’s disease. NAC has shown progress in reducing the symptoms of these diseases (x, x).

N-acetyl L-cysteine can treat several respiratory conditions. It benefits the lungs as an expectorant, which helps loosen thick mucus. It also increases glutathione levels in the lungs and bronchial tubes, which works to reduce inflammation and thin mucus. Studies have shown that supplementing with NAC may help improve the symptoms of COPD and improve lung function in the process (x, x). This reduces coughing, wheezing and various respiratory attacks (x). Patients suffering from asthma, bronchitis, pulmonary fibrosis and cystic fibrosis have found relief with supplementation.

N-acetyl L-cysteine along with glutathione has been proven to help boost the immune system (x). In certain patients who are immuno-compromised, NAC has been shown to hinder virus replication. This helps to decrease the severity and duration of the illness (x). Similar studies have shown that NAC may block certain cancer cell replication (x, x, x).

Side Effects of N-Acetyl L-Cysteine

N-acetyl L-cysteine is generally safe to take as a supplement. The body produces this powerful antioxidant naturally and often absorbs and filters excess amounts through the liver. The supplement does have a strong odor and may be hard to take. Common but mild side effects are (x):

Though NAC supplements are generally safe, doses higher than seven grams can be toxic. When taking N-acetyl L-cysteine, avoid supplementing with other forms such as D-cysteine, D-cystine and 5-methyl cysteine (x). Some other NAC side effects to note are:

In rare cases, patients who are supplementing with NAC may experience a sudden drop in blood pressure, liver problems, extreme drowsiness, rashes, headache or fever. If inhaled, N-acetyl L-cysteine has been known to cause mucus excretion from the nose, mouth swelling, and tightness in the chest. 6 percent of the population may experience allergic reactions to the intravenous use of L-cysteine, which can result in swelling, hives and other soft tissue inflammation.

Patients who have asthma should only take NAC supplements if they are closely monitored by a medical professional. Inhaled forms of the supplement have been known to cause bronchospasm. This can limit the ability to breathe and cause lightheadedness or shortness of breath (x).

NAC supplements taken orally have been known to cause heartburn, rectal bleeding and dyspepsia. This includes excess gas, loss of appetite and bloating (x).

Oral consumption of NAC supplements may cause drowsiness, weakness in the limbs, vertigo and lightheadedness. In rare cases, increased cranial pressure can occur which results in rolling headaches.

N-acetyl L-cysteine enhances the effects of several medications. NAC supplements increase the effectiveness of immo-suppressants such as azathioprine, cyclophosphamide and prednisone. They also boost the effects of nitroglycerin and isosorbide which treat pain in the chest. The increased effects may cause a dangerous drop in blood pressure so it’s important to speak with your doctor prior to starting a NAC supplement regimen.

COPD treatment supplementation is 400 mg to 1,200mg daily divided into equal doses. The same doses are suggested to treat high homocysteine levels in the blood.

Patients who choose to supplement with NAC to treat the symptoms of epilepsy should consume 4 to 6 g daily under the supervision of a medical professional.

To reduce the effects of the flu and to reduce the risk of developing a stroke or heart attack, the recommended daily dose is 600 mg twice per day.

Intravenous and inhaled dosages should only be administered by a trained medical professional.

N-acetyl cysteine (NAC) is a powerful tool that your body needs to help it function optimally. As a supplement, it has invaluable glutathione-boosting qualities. Free radicals cause damage at the cellular level that can break down brain and immune system function and cause visible signs of aging and even depression. NAC helps your body get rid of harmful heavy metals and other toxins that cause a host of health issues.

Science has shown that NAC can help support the liver, which reduces the concentration of toxins in the body overall. When applied topically or taken orally, it can boost skin health and reduce acne outbreaks. It also plays an important role in brain health. NAC serves as a robust neuroprotectant that has been used successfully in the fight against mental disorders such as Parkinson’s disease, depression and addiction.

Many fertility issues have been linked to lower levels of glutathione. Taking NAC supplements can improve both egg health and sperm health, which results in fewer fertility complications. This supplement is inexpensive and easy to use. It is generally well tolerated with very few side effects and they are generally mild.