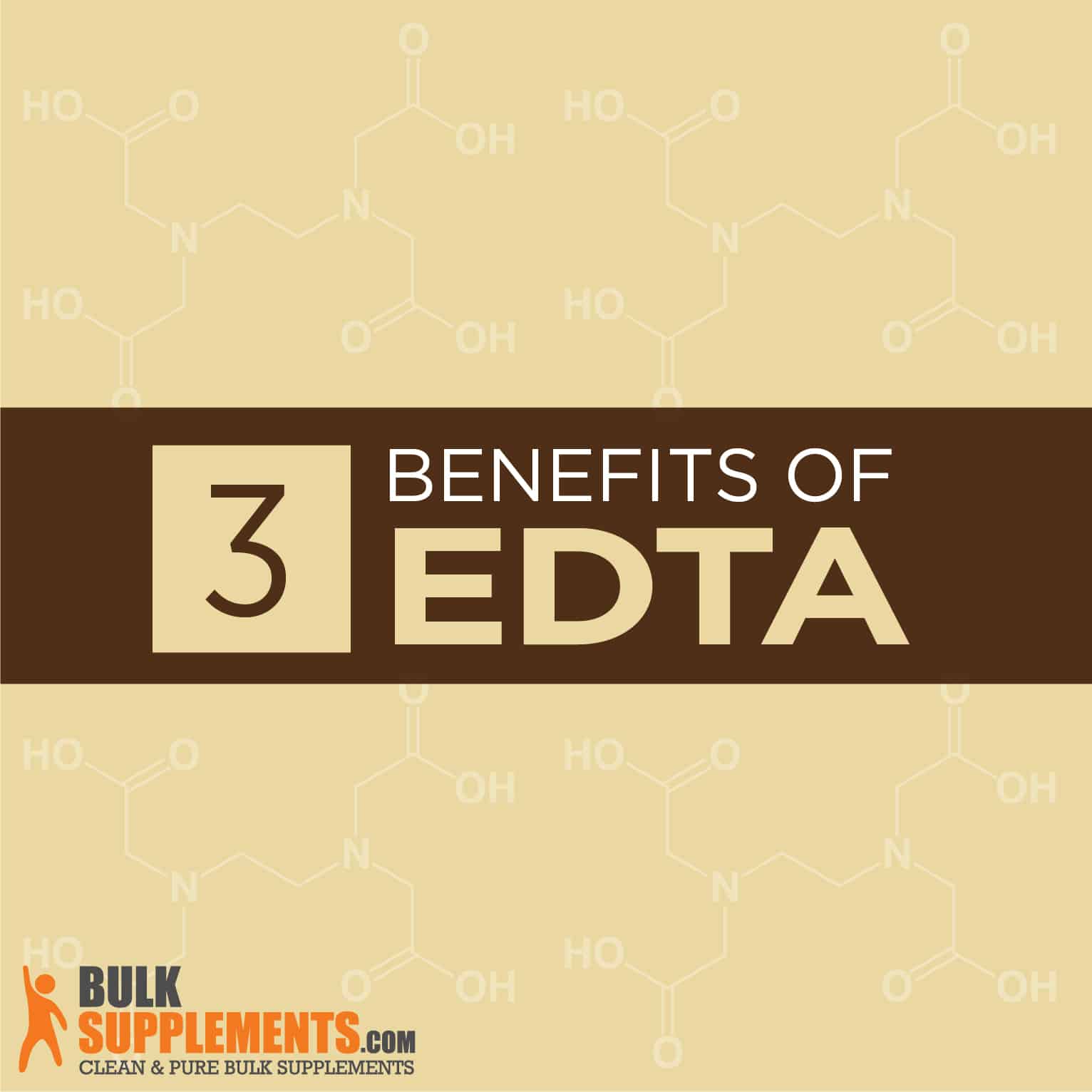 What is EDTA Disodium?

EDTA disodium is a chelating agent, which is a molecule that can create different bonds with one metal ion. Once a chelating agent binds to the metal, it stabilizes it and the metal becomes water soluble so the body can eliminate toxic metals from the bloodstream and urine (x, x).

What is EDTA Calcium Disodium?

There are many different forms of EDTA, and they all play various roles in the body. EDTA can bind with metal ions, including iron, lead, magnesium and calcium. EDTA calcium disodium is often confused with EDTA disodium. It is a different form of EDTA, which binds to a calcium ion to reduce calcium levels in cases of hypercalcemia, which occurs when calcium levels get too high and can be life-threatening. However, it can also cause hypocalcemia, in which calcium levels get dangerously low (x, x, x).

What is EDTA Disodium Used For?

EDTA calcium disodium is also commonly found in a range of food and drinks as a preservative to keep food fresh and enhance flavor. It is also found in household products (x, x).

Diabetes affects many different systems in the body, including the cardiovascular system. Researchers used a sample of diabetic patients older than 50 who had previous heart attacks and gave them EDTA to test whether it would reduce cardiac events. They found that chelation therapy may effectively reduce cardiovascular events in diabetes, but there is not enough evidence to determine if it will be effective in all patients who have suffered a heart attack (x).

Alzheimer’s disease is the most common form of dementia in older adults and leads to progressive deterioration of memory and cognition (x). Researchers are still searching for the exact mechanisms of the disease. However, plaques in nerve cells in the brain may play a substantial role (x).

There is also research showing that transition metal levels in the brain may be involved in Alzheimer’s disease, causing cognitive loss and neurodegeneration (x). Because of this, some research has proposed chelation therapy as a possible supplemental treatment. There is some research that indicates that EDTA could potentially slow cognitive decline in a subset of Alzheimer’s patients. However, these findings are still preliminary and they may not apply to all cases (x).

Heart disease is one of the leading causes of death in the United States. It can lead to heart attacks and strokes, as well as other debilitating or life threatening medical conditions (x).

Some patients use chelation therapy, including EDTA disodium, as a treatment. Doctors infuse EDTA into the veins over the course of treatment and researchers found that these patients showed fewer signs of subsequent cardiac events, such as heart attacks. However, more research is necessary in order to understand exactly how EDTA works in patients with heart disease (x).

A note of caution: heart disease is a serious, potentially life threatening disease. Before you make any changes to your treatment regimen, you should always speak to your doctor. EDTA should not be a first line treatment, but a supplementary therapy.

Side Effects of EDTA Disodium

Although EDTA disodium does have a wide range of uses, it can be toxic at high doses. Always take it at the proper doses to avoid any potentially fatal side effects from overdose or even routine use (x).

The main function of EDTA disodium is to remove toxic metals from the body. However, it can also remove healthy metals as well, such as iron. Iron is an essential nutrient and low levels can lead to a condition called anemia. Anemia is a low level of red blood cells—which contain iron—to carry oxygen throughout the body. This can cause fatigue, weakness and headaches (x, x).

If you notice any of these symptoms, EDTA could be the cause. Stop using the supplement and consult with a doctor. There are a number of treatments for anemia to increase red blood cell count, but some types of anemia are more severe than others (x).

Some people do not tolerate EDTA disodium in higher doses and can lead to fever. The fever could be a result of your body’s reaction to it (x).

If you notice a fever after taking EDTA disodium, you should stop using the supplement and speak to a doctor. The fever should go away once the supplement leaves the body. If the fever remains, seek medical attention.

It is also causes gastrointestinal discomfort in some people because the body has issues absorbing it, which can lead to discomfort and indigestion, as well as vomiting or diarrhea (x, x).

These side effects are usually minor and often go away as soon as you discontinue use of the supplement. If the symptoms persist, speak to a doctor.

A study tested the effect of EDTA disodium on insulin action in adult rats and concluded that EDTA blocked insulin binding in the blood (x). This can lead to changes in the levels of insulin in the blood and in some cases may cause insulin shock (x). Insulin shock is when blood sugar drops and the body has too much insulin circulating at once. It can cause weakness and convulsions (x).

If you notice these symptoms after taking EDTA, stop using it immediately and seek medical attention.

EDTA disodium has had positive effects for some patients with cardiac disease. However, it may also cause some cardiovascular side effects, such as low blood pressure (x).

Low blood pressure can result from a wide variety of factors, such as medication, loss of blood and nutritional deficiencies (x). However, if you notice that your blood pressure drops after taking EDTA disodium, you should consider discontinuing the supplement. Speak to a doctor to discuss cardiovascular health.

EDTA disodium expels metals from the body, including calcium when it binds with a calcium ion. However, this can cause hypocalcemia, which occurs when calcium levels get too low (x). It can cause muscle spasms and twitching, numbness or tingling in the fingers and toes, irritability, depression, confusion and may cause the heart muscles to contract (x).

Warfarin is a drug that slows blood clotting, often used in patients with coronary heart disease. However, one patient received chelation therapy and experienced anticoagulation, meaning the patient’s blood thinned and took longer to clot. It may make warfarin less effective and lead to increased blood clotting because it has anticoagulant activity (x, x).

Usually, a medical professional administers EDTA disodium intravenously (x). However, you can take EDTA disodium and EDTA calcium disodium in powder forms as well. The standard dose is 600 mg. EDTA disodium can be toxic in higher doses, so always make sure to take no more than the recommended dose (x).

EDTA disodium is a chelating agent that rids the body of toxic metals. A chelant is a molecule that can create more than one different bond with only one metal ion. It then stabilizes the metal ion so that it cannot react with other substances and the body can eliminate it.

This supplement comes in many different forms, including EDTA calcium disodium. It treats heavy metal poisoning and some physicians also use it in conjunction with cancer treatment. It is also found in food and household products. Although it is linked to several benefits, there are also a number of potential side effects of EDTA disodium in high dosages. Consult a medical professional before using it to treat any medical condition.