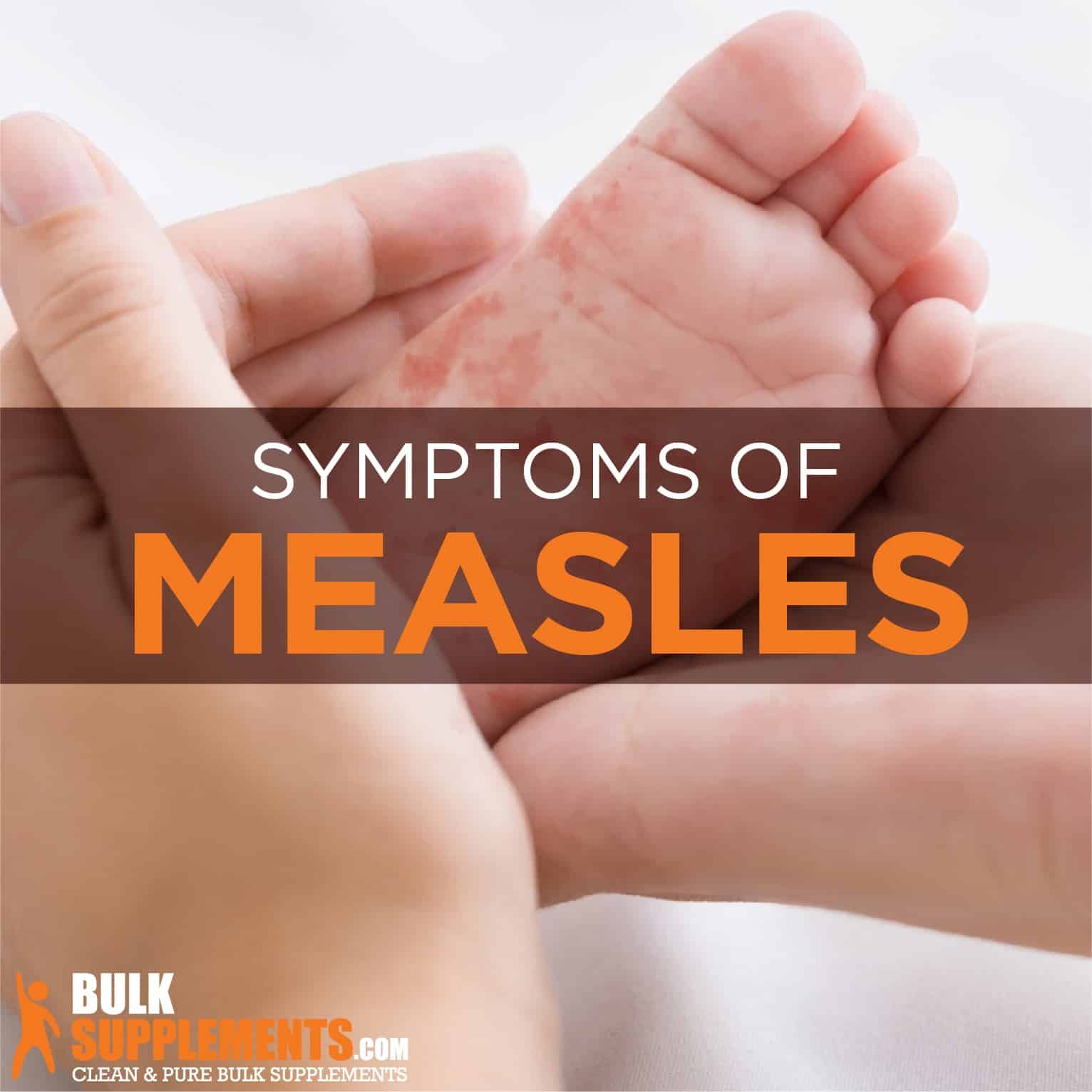 Measles is a common childhood infection. Although this condition used to be quite common, it can now be prevented through vaccination (x). Also known as rubella (x), measles can be fatal for small children.

Death rates as a result of measles have been on a global decline since many kids receive the measles vaccine. However, the infection still claims the lives of 100,000 people per year (x), mostly kids under the age of 5.

In the U.S., the number of people with measles has also been decreasing because of the high vaccination rates in the country (x). An average of 60 new cases of measles per year has been detected in the U.S. between 2000 and 2010 (x). However, cases of new infections have increased to an average of 205 people per year in recent years. Most of the new cases of infections occur in people who moved into the country without receiving the vaccination (x).

One of the first written accounts of measles dates back to the 9th century. In 1757, a Scottish doctor named Francis Home discovered that measles is caused by an infectious agent in patients’ blood (x).

In 1912, the U.S. classified measles as a nationally notifiable disease, which required doctors to report all new cases of the disease to the federal government. The following year, an average of 6,000 cases of measles was reported in the U.S (x).

The improved vaccine developed by Maurice Hilleman is the only measles vaccine that has been used in the U.S. since 1968. Today, this vaccine is usually administered as a combination with mumps and rubella vaccines (x).

In 1978, (x) the Centers for Disease Control (CDC) set a goal of eliminating measles in the United States by 1982. Although the CDC did not manage to achieve its goal, a high number of vaccinations led to a decrease in the rate of measles infections (x).

By 1981, (x) the U.S. had 80 percent fewer cases of measles infections compared to the previous year. However, in 1989, there was a measles outbreak among school-aged children that prompted several federal health agencies to recommend an additional dose of the MMR vaccine for all children (x). The implementation of this recommendation led to a further decline in new cases of measles. In 2000, health authorities declared the U.S. to be measles-free (x).

In 2019, new cases of measles were declared in the U.S. There have been more than 1,250 confirmed cases of measles between January and October 2019. Most of these new infections have been linked to an outbreak of measles in New York. The infection spreads quickly among communities with the highest number of unvaccinated individuals (x).

There are two main types (x) of measles infections — measles and rubella or German measles.

The Rubeola virus causes the standard form of measles, while the German measles is caused by the Rubella virus (x). The measles, mumps and Rubella (MMR) vaccine provide protection from both types of measles (x).

The Rubeola and Rubella virus cause measles (x). The viruses live in the nose, throat and mucous membranes of infected children and adults (x). A distinct symptom of measles infection is the development of a rash. However, the infection is contagious for up to four days before and after the onset of the rash (x).

The virus that causes measles infection can remain active on the surface of an object for more than two hours (x).

Measles symptoms (x) include fever and reddish-brown rash that is usually accompanied by:

The fever may range from mild to severe and may last several days. The rash usually appears 3 to 4 days after the first symptoms and may last for more than a week (x). It may begin to appear behind the ears before spreading to the head and neck. The rash usually spreads to the entire body within a few days of infection. The spots often join together as they grow with time (x).

Although not all childhood rashes indicate measles, consider taking your child to the doctor if:

Although the symptoms of chickenpox and measles tend to be similar, there are distinct differences between the two conditions.

A chickenpox rash is a raised red bump that eventually morphs into an itchy fluid-filled blister before it finally ruptures and scabs over (x). On the other hand, the measles rash is a relatively flat red spot that does not contain any fluid. The spots often join together as the rash spreads (x).

Inhaling respiratory droplets containing the chickenpox virus and contact with a contaminated surface, including the fluid from ruptured blisters can spread the infection (x).

Someone who is infected with chickenpox is contagious for up to two days before the appearance of the rash (x). The individual will remain contagious until all the spots have scabbed over (x).

Like chickenpox, measles spreads through contact with respiratory droplets of infected persons either through inhaling or by touching contaminated surfaces (x).

Treatment for both measles and chickenpox focuses on minimizing the symptoms until the infection clears on its own (x).

Measles can cause many health complications (x), some of which can be quite serious. The complications often occur in vulnerable populations (x) including:

Measles infection does not have any specific treatment (x). A doctor may recommend rest and drinking plenty of fluids if the patient does not experience any additional complications. Symptoms should disappear on their own within seven to ten days (x).

Patients and caregivers should take various steps to manage (x) the condition:

Measles infection can cause complications (x) during pregnancy, including miscarriage, low birth weight, and early delivery. Talk to your doctor if you have not been vaccinated and are planning to become pregnant.

This product promotes respiratory, immune, eye, skin, bone and teeth health (x). It also supports gene expression and the development of the fetus in the womb (x). Vitamin A also supports the formation of stem cells and red blood cells (x).

The correct serving size for this product is 30 milligrams per day. Consider using an accurate measuring scale for this product because overdose may cause adverse health effects such as nausea, toxicity, brain inflammation, liver damage and headaches. Do not supplement vitamin A if you are breastfeeding or expectant.

This is an essential nutrient that supports the immune system (x). Naturally, vitamin C has a sour taste, which is why it is a common ingredient in candy. This product is a powerful antioxidant that fortifies collagen in the body (x). It also helps in the repair of damaged tissues and organs (x).

This product fortifies the immune system, promotes metabolism and plays a vital role in the synthesis of carnitine (x). Vitamin C also supports cardiac health (x). The correct serving size for this vitamin c powder is 1,000 milligrams per day.

Avoid taking this supplement if you have a copper deficiency. Pregnant and nursing moms should not take this product altogether.

This product supports metabolism, including the conversion and release of energy in the body (x). It also facilitates the production of red blood cells, the formation of antibodies, and the synthesis of DNA and RNA (x).

Vitamin B6 plays an essential role in the breaking down of proteins and amino acids (x). The correct serving size for this vitamin B6 Pyridoxine Hydrochloride is 50 milligrams per day.

Overdose may cause loss of sensation in certain parts of the body and an inability to maintain balance. Expectant and lactating mothers should not take this supplement.

Vitamin E is available in eight different forms, with each playing an essential role in the body’s biological processes (x). It promotes skin health ad protects cell membranes from the harmful effects of oxidation (x). It is also a powerful antioxidant that protects body cells from free radicals (x). The correct serving size for vitamin E powder 700 IU is 350 milligrams per day.

Excessive consumption of this product may cause blurry vision, rash, bleeding, abdominal discomfort, cramps, stroke and nausea. Reduce dosage or discontinue use if the side effects persist. This supplement is not recommended for nursing and pregnant mothers.

The healthy dosage for zinc citrate powder is no more than 150 milligrams per day. Consider using this product with iron and copper supplements. Do not supplement with zinc if you are expectant or breastfeeding.

This is a powerful antioxidant that is rich in vitamins, fiber and minerals (x). It promotes digestion and may even be used as a form of mild laxative (x). Elderberry also supports heart and respiratory health (x). The recommended dosage for elderberry extract powder is 1,000 milligrams per day. Do not take this supplement if you are pregnant or lactating. Consult a physician for supplementation instructions if you have an existing health condition.

Garlic product supports cardiac, immune and respiratory health (x). It also helps to maintain healthy levels of cholesterol and glucose in the body (x). The correct dosage for garlic extract powder is 650 milligrams per day taken with meals. Side effects are usually mild and include abdominal discomfort and bad breath. Do not take this product if you are pregnant, nursing, diabetic or scheduled for surgery.

Beta-carotene promotes vision and supports cardiac, skin and respiratory health (x). The healthy serving size for beta carotene powder is 1,300 milligrams per day. For the best results, consider taking the supplement with vitamin A. Side effects may include nausea, jaundice and stomach upset. Pregnant women and nursing mothers should avoid taking this product altogether.

Common symptoms of measles include a reddish-brown rash, fever and respiratory congestion. This condition may cause various complications (x), including brain inflammation, hepatitis, bacterial infections, febrile seizures, diarrhea, vomiting and eye infections, among others. Treatment (x) varies depending on the underlying complication it causes. Supplementing with vitamins, garlic, beta-carotene, elderberry and zinc may help to minimize the symptoms of the infection.