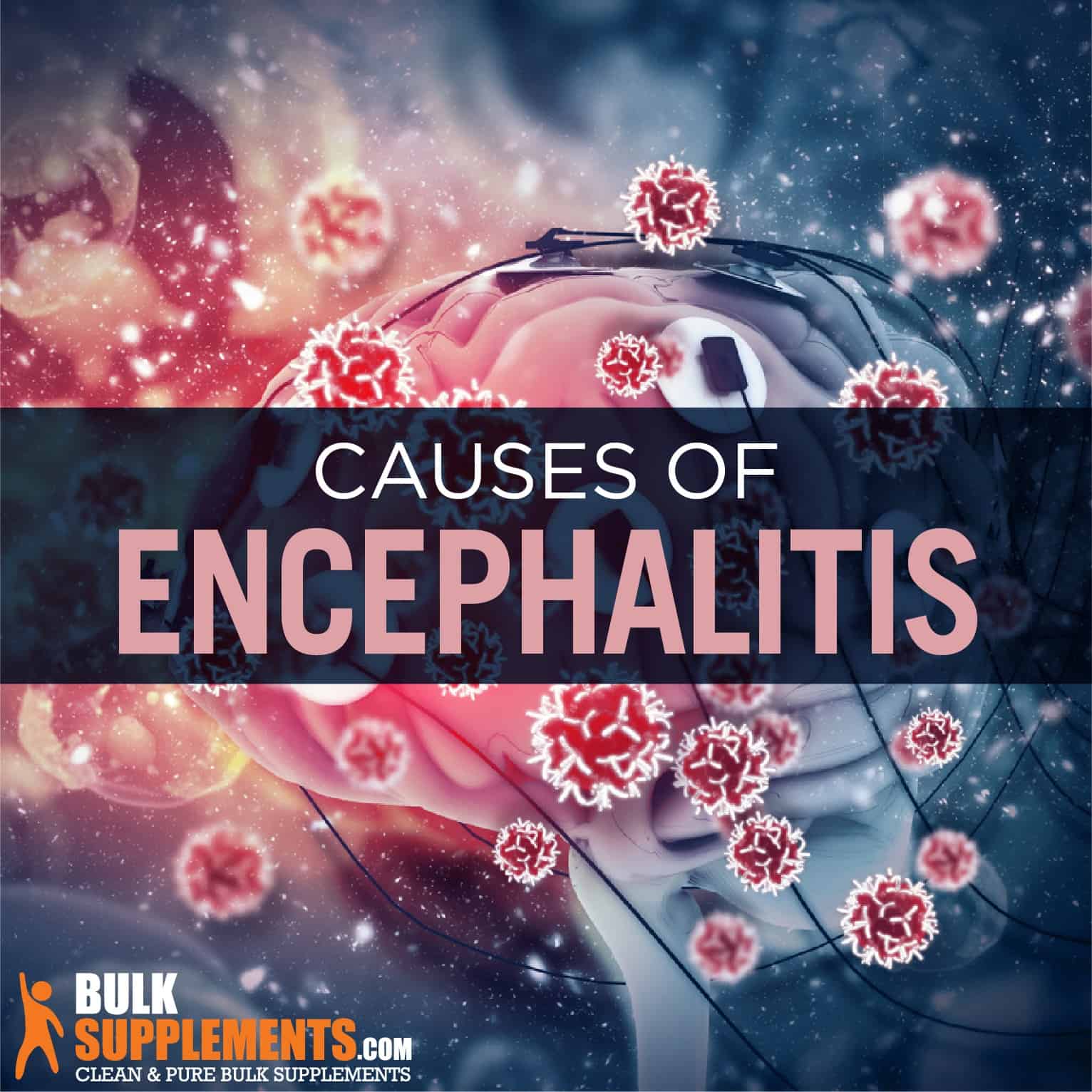 Encephalitis is a condition in which the human brain becomes inflamed. Around 250,000 patients were diagnosed and hospitalized in the United States in the last decade as a result of this disease. Additionally, doctors report approximately 6,000 cases of encephalitis in the United Kingdom each year (x).

In a large amount of cases, doctors cannot identify a cause for encephalitis. But in most identifiable cases, it is a result of a virus. The most common causes are herpes simplex virus types 1 and 2, arboviruses and enteroviruses. Herpes simplex encephalitis progresses very quickly and according to research, this virus is responsible for 10 percent of encephalitis cases (x).

Any virus can potentially lead to encephalitis, but not all patients with an infection will develop it. Most of the time the cause of infectious encephalitis is a virus, but it may develop from a fungus, bacteria or parasite (x, x, x).

Lastly, the virus may activate an autoimmune response that causes the body’s own immune system to mistakenly attack the brain and cause inflammation. In some cases, autoimmune encephalitis develops as a result from an infection as well and in other cases, the patient has antibodies in the blood that may be connected to the autoimmune response that attacks healthy tissue. However, medical experts have not identified why some patients have these antibodies in their bodies (x, x, x).

In addition, herpes simplex encephalitis type 1 is most common in patients younger than 20 and younger than 40. However, any patient can contract it. Encephalitis from genital herpes (herpes simplex virus type 2) is transmitted sexually, so lifestyle practices can affect the patient’s risk (x).

Symptoms may vary based on the causes and whether the condition is infectious or autoimmune. Initially, infectious encephalitis usually causes headaches and other symptoms similar to the flu, such as lethargy, fever, vomiting and stiffness. Then the patient’s symptoms usually progress and become more severe hours, days or weeks later (x).

The most severe symptom is a change in the patient’s consciousness. They may simply experience mild confusion or drowsiness. The condition may be more severe and cause loss of consciousness, coma and seizures. The patient may also have sensory changes and sensitivity to light (x).

Autoimmune encephalitis causes similar symptoms, but they may vary depending on the antibody that causes it and the symptoms may last longer. In addition to seizures, confusion and behavioral changes, patients may experience paranoia, delusions, hallucinations and sleep disturbances (x).

Encephalitis may also affect young children and infants. Parents should pay attention to certain behaviors and symptoms that may signal encephalitis, such as stiffness, fever, vomiting and unusual irritability. The infant may also have a poor appetite and fail to wake for feedings or the parent may feel a bulge on the infant’s soft spot on the top of the head (x).

In some cases, patients recover from encephalitis, but it is still a dangerous condition. If a patient does not receive treatment right away, it can be fatal and cause serious complications such as (x):

Doctors need to perform a series of tests to confirm if a patient has encephalitis because they cannot rely on the symptoms alone, since some of them are similar to other conditions. These diagnostic tests include (x):

Also called a lumbar puncture, this procedure aims to collect sample fluid from the spinal cord by inserting a needle at the bottom of the back. Then the doctors test the fluid to find signs of infection (x).

Brain Imaging with an MRI or CT Scan

MRI and CT scans are used to find unusual changes in the brain’s structure. Different viral infections can infect different parts of the brain. If the doctor is able to determine which part of the brain is affected, it may help determine the kind of virus attacking it (x).

An electroencephalograph (EEG) attaches a small metal disc with electrodes to the patient’s scalp to monitor and record brain activity. Although it doesn’t determine the virus that is causing it, the patterns may give the doctor an idea of the source of the infection.

A blood test may help identify cell counts, blood chemistry and the source of inflammation.

This procedure is a last resort if the doctor cannot identify a cause after several other diagnostic tests. In this procedure, the doctor collects a sample of the brain tissue and examines it for infection. However, this is not a common diagnostic option (x).

Treatment aims to either address the specific cause of the condition or to address the symptoms and complications. If a virus is the culprit behind the encephalitis, the patient needs antiviral medication. For example, a doctor may prescribe acyclovir for herpes simplex. The patient will require antibiotics for encephalitis caused by bacteria and immunomodulatory drugs for autoimmune encephalitis (x).

However, some types do not have a specific treatment to address the cause directly, so instead doctors attempt to address the symptom and provide support to the body. For example, a patient may need breathing assistance or a urinary or feeding tube. In some cases, a doctor may induce a coma, shutting down the brain temporarily so that it can recover from the inflammation (x).

Recovery from encephalitis may be a very long process because illnesses that affect the brain take much longer to heal than other injuries. Patients may need rehabilitation treatment to regain skills that have been impaired and manage irreversible complications. Each case is different and produces unique needs, but patients may benefit from the following types of rehabilitative therapy—speech and language therapy, physical therapy, occupational therapy and educational psychology (x).

Supplements are not designed to diagnose, treat, cure, or prevent any disease, including encephalitis. However, dietary supplements may help support natural processes in the body. Always consult a doctor before adding any supplements to a dietary regimen.

Fatty acids are a natural component of the human body. They make up all of the fat in the body and in food. When a person eats food with fat, it gets broken down into fatty acids so that the body can absorb them easier. Omega 3, omega 6 and omega 9 are just three types of fatty acids that the body contains naturally. They each have different benefits and they are present in different dietary sources. The recommended dosage for omega 3-6-9 softgels is three softgels once or twice a day. Consult a doctor for approval before taking this supplement.

Vitamin C is a water-soluble nutrient with natural antioxidant properties. It is a natural part of the body that helps cells in the immune system fight foreign invaders Specifically, white blood cells use it to get rid of the disease or infection that threatens to cause damage. The suggested serving size for vitamin C/ascorbic acid powder is 1,000 mg per day. But consult a doctor before taking the supplement.

Cat’s claw extract is a type of vine that grows in the Amazon rain forest with thorns that look like a cat’s claw. The Inca civilization used it in traditional medicine practices, making it into teas and powders. Cat’s claw contains a compound called pentacyclic oxindole alkaloid, which acts as a natural inflammatory blocker in the body. The suggested serving size for cat’s claw extract powder is 500 mg one to two times a day. Talk to a doctor before taking the supplement to ensure safety.

Encephalitis is a condition that causes inflammation in the brain. Most often, encephalitis is caused by a virus that attacks the brain, but it may be a result of a bacteria or parasite as well. The infection may affect the brain directly or it may start in another part of the body and spread to the brain. Encephalitis may also be autoimmune, a result of antibody hormones that mistakenly attack the brain.

Common viruses include herpes simplex virus, but patients can also get it through bites from infected ticks and mosquitoes. Initially, encephalitis causes flu-like symptoms, which may range from mild to severe. The most severe sign is a change in the patient’s consciousness. They may suffer mild confusion, seizure or coma. Encephalitis may also affect the patient’s motor skills, speech, memory and behavior.

Without prompt medical attention, encephalitis can be fatal. Treatment like antibiotics, antivirals and immunomodulatory drugs aim to address the immediate cause. But other treatment methods—such as ventilators, feeding tubes and induced coma—aim to address the symptoms and complications. The recovery process may be very long and difficult and patients may need rehabilitative assistance to help manage the complications.

People may also take supplements to keep the body healthy. However, they do not diagnose, treat, cure or prevent any disease. Supplements are not an adequate replacement for legitimate medical advice. These statements have not been evaluated by the Food and Drug Administration. Consult a doctor before taking supplements.