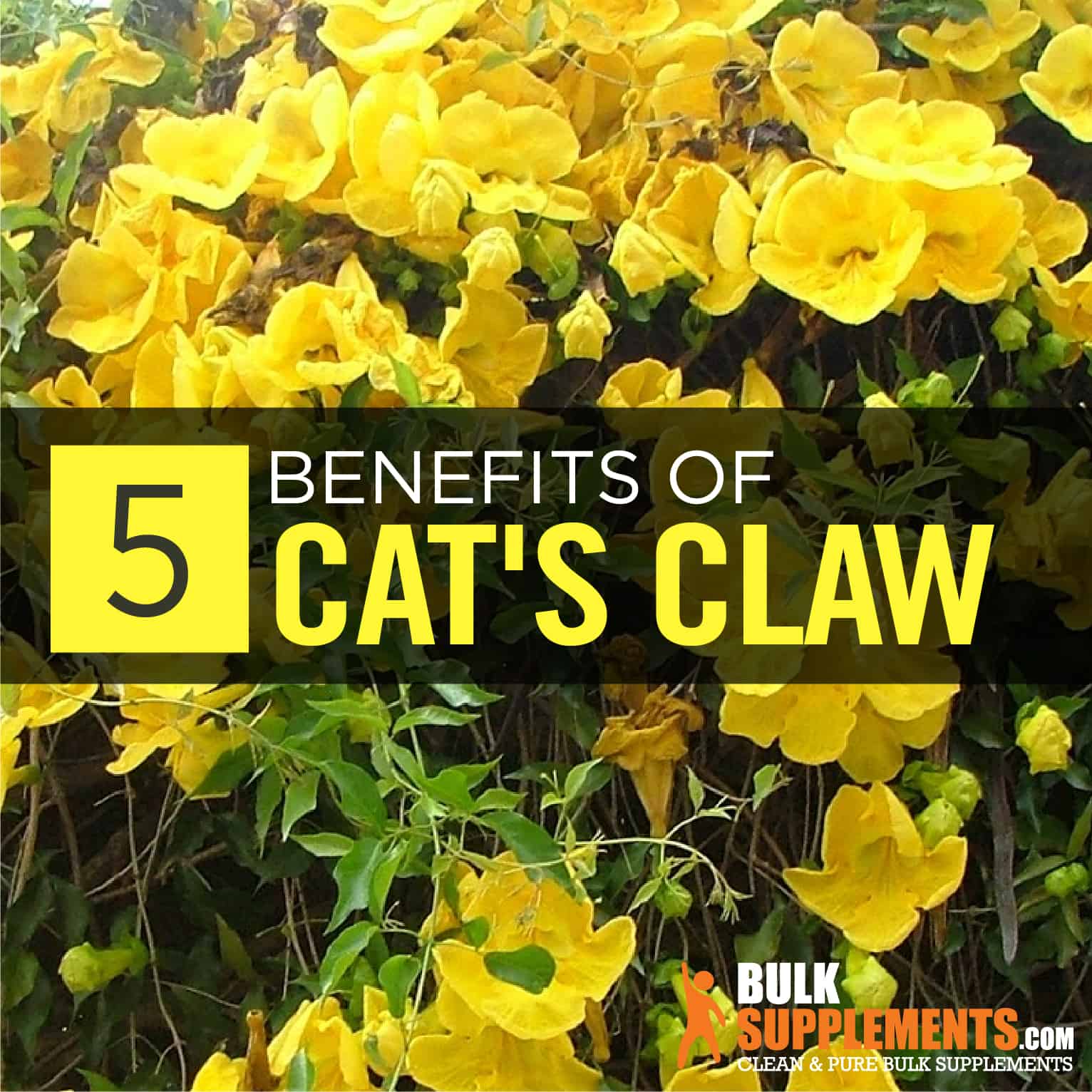 There’s a number of traditional medicines that are used to reduce inflammation and boost the immune system. Of these ancient therapies, cat’s claw is one of the most effective. Cat’s claw extract can be used to treat a wide range of medical conditions, such as rheumatoid arthritis and high blood pressure. It’s also well tolerated with few common side effects, making it a safe addition to any supplement regimen.

What is Cat’s Claw Extract?

Cat’s claw is a type of woody vine native to the Amazon rainforest. It gets its name from the thorns growing on the vine that resemble cat’s claws (x).

Cat’s claw has long been used for its health benefits and was a staple of Inca medicine, used to treat everything from wounds to an upset stomach. The root bark of the vine was used to make tea and was also ground into powder (x).

Hypotension, or high blood pressure, affects millions of people and increases the risk of heart attacks and strokes. Cat’s claw may be an effective way of lowering blood pressure and reducing the risk of cardiovascular events.

Studies in mice have indicated that cat’s claw may be helpful for patients with hypotension. It did this by affecting calcium channels, leading to a lower blood pressure (x). More research is needed to see if these effects are also seen in humans.

Cat’s claw should not be used as a primary treatment for high blood pressure. However, it may be useful when combined with other medication.

Cat’s claw may also help with healthy digestive support and reduce irritation in the intestines.

Specifically, cat’s claw has been shown to have a positive effect on people with Crohn’s disease. This is a condition where there is chronic inflammation in the intestines, leading to pain, digestive discomfort and malnutrition (x).

Patients with Crohn’s disease were given 250 mg per day of cat’s claw to help fight inflammation in the intestines. Although cat’s claw was unable to treat the condition, it did help reduce inflammation. This can also lead to better absorption of nutrients, as well as less digestive discomfort (x).

It should be noted that studies of cat’s claw on digestive health have been largely limited to people with Crohn’s disease. It’s still unknown if the supplement has a positive effect on those with health digestive systems.

The supplement is also not recommended as a main treatment for serious cases of digestive distress. However, it may be effective when used in combination with other therapies.

Cat’s claw has been shown to contain a number of compounds that can reduce inflammation, such as pentacyclic oxindole alkaloid. This compound can block the production of inflammatory agents, helping reduce swelling and prevent pain from inflamed joints (x).

The anti-inflammatory effects of cat’s claw may be helpful in treating arthritis. Patients who took cat’s claw for a year showed significantly improved symptoms with fewer inflamed joints (x).

Positive results were also seen when cat’s claw was used to treat osteoarthritis. This is a condition where the bones rub against the joints, causing inflammation and pain (x).

Patients who were given cat’s claw over the course of four weeks showed less pain when active than those who did not receive the treatment. However, inflammation did not go down.

Cat’s claw may also be able to boost the body’s immune response to infections, speeding healing times and helping prevent colds and flus.

Multiple studies have supported the role of cat’s claw in increasing immune function. One study found that men who were given cat’s claw extract had higher levels of lymphocytes, cells that help fight infections (x).

Another study, this one conducted in rats, found that cat’s claw significantly boosted levels of lymphocytes without any noticeable side effects (x).

These studies are still early, and they were not linked to any specific disease. That means we still don’t know how the body responds when cat’s claw is used to treat certain infections. However, there were few side effects, so the supplement appears to be a safe way to increase immune activity.

Cat’s claw may have a role in fighting certain types of leukemia. It contains a number of oxindole alkaloids, compounds that can prevent cancer cells from growing. These compounds may also be able to kill off cancer cells, preventing the spread of leukemia (x).

Much more research is needed to understand the role that cat’s claw may have in cancer. It should also not be used as a primary treatment for any type of cancer. However, it may be a useful supplement when combined with other first line cancer medications.

Cat’s claw extract comes with few major side effects. However, users may sometimes experience a few small side effects, especially when they first start taking the supplement. Here are some of the most common (x):

Some users may experience nausea when taking cat’s claw, especially in the first few days after beginning supplementation. This is usually minor, and symptoms often resolve themselves quickly.

If you feel nauseous, lower the dose to see if the symptoms go away. If they remain, discontinue use of the supplement.

Cat’s claw may cause headaches in some users. Headaches are fairly mild and often go away once the body adjusts to the supplement.

If you notice a headache while taking cat’s claw, cut the dose back and see if the symptoms go away. If the headache remains, discontinue use of the supplement.

What is Xylitol & Why Should You Try It?

One of the main benefits of using cat’s claw is that it can lower high blood pressure. However, if you already have a healthy blood pressure, the supplement could potentially lower blood pressure too much.

If you notice a large drop in blood pressure, you should discontinue use immediately. In most cases, blood pressure will return to normal in a few days. If it does not, consult your doctor.

Cat’s claw is known to interact with a number of different drugs (x). If you are taking blood thinners, cholesterol drugs or immunosuppressants, speak to your doctor before taking cat’s claw. The drug interactions are usually minor, but in rare cases can cause severe reactions.

Women who are pregnant or breastfeeding should avoid cat’s claw. Although there is no evidence that it’s unsafe for pregnant women, there isn’t enough information for it to be considered safe (x).

There is little safety information on the use of cat’s claw by children. It may be safe, but is not recommended.

Autoimmune disorders occur when the immune system begins to attack healthy cells in the body.

If you have an autoimmune disorder, you should not take cat’s claw. The supplement has compounds that can increase activity of the immune system. Although this may be beneficial for many people, it can be very dangerous for those with autoimmune disorders (x).

Cat’s claw is a vine that grows in tropical areas of Central and South America. Traditionally, the root bark of the plant was used to make medicine. Nowadays, it is usually consumed as an extract. This makes it easier to use, and also helps ensure that you get a consistent dose.

For cat’s claw extract powder, take 500 mg one to two times daily. Do note, however, that it is best to consult with a doctor before beginning supplementation.

To take the extract, you can mix it in water or milk. It also blends easily into a smoothie. The extract can be made as a tea as well.

Cat’s claw has long been used in Central and South America for its medicinal properties. Studies have begun to back up many of the original uses of the plant.

Cat’s claw supplements have been shown by multiple studies to boost the function of the immune system. This may help heal wounds and infections more quickly (x). The extract also shows anti-inflammatory properties, making it an excellent natural treatment for conditions such as rheumatoid arthritis and osteoarthritis (x, x). It may even be an effective natural way of lowering blood pressure.

Additionally, cat’s claw extract may have a role in slowing the progression of some types of leukemia (x). The few side effects that do appear with cat’s claw supplementation, including nausea and headaches, often go away once the body adjusts to the supplement.