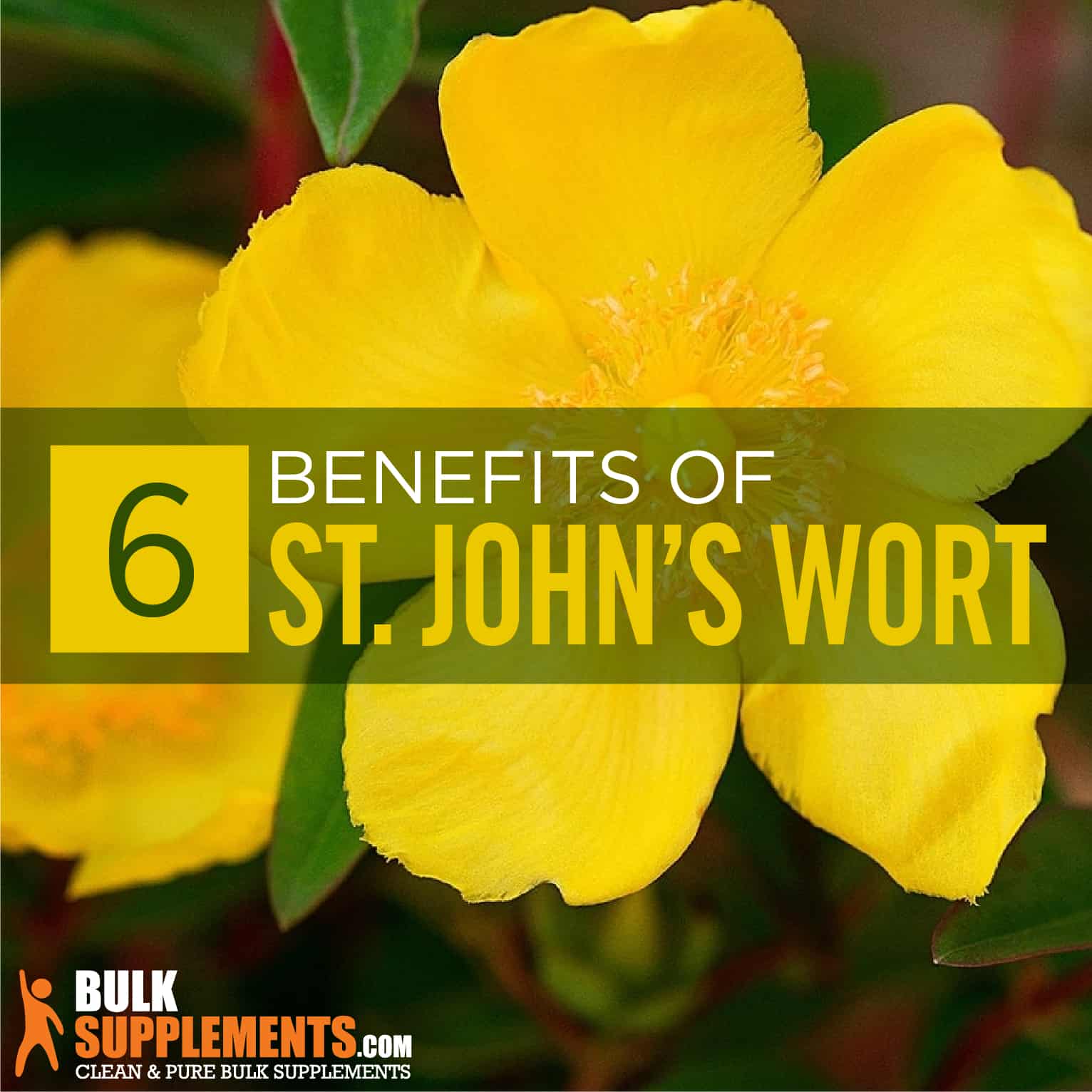 What is St. John’s Wort?

One in 10 Americans take antidepressants. If you’re a woman in your 40s or 50s, that number jumps to one in four. By 2020, depression may become the second most prevalent disease, following heart disease (x). The need for a natural remedy for mental health has never been greater.

St. John’s wort (Hypericum perforatum) has a long, rich history. Healers who once knew it as a “magical plant” have used it medicinally for more than 2,000 years. The ancient Greeks advised its use as an antidepressant and anti-inflammatory millennia ago and believed the flowering Hypericum perforatum had protective, and even mystical properties (x).

The word Hypericum means “over ghosts.” Some believed that the smell alone of the herb would cause evil spirits to flee. The word perforatum means “punctured” — there are tiny holes in the leaves and flowers of St. John’s wort, tiny glands that release essential oils and resins when crushed.

St. John’s wort grows all around the world in many climates. Its name comes from the time of year it blooms, around the 24th of June, the birthday of St. John the Baptist. Wort is simply an old-fashioned word for plant. In Australia, St. John’s wort was often considered an invasive weed since it was not native there, but Australia now produces approximately one-fifth of the world’s supply. The flowers produce extracts, teas and pills, and millions of people take St. John’s wort, with estimated annual sales in the billions (x).

Many studies have shown that St. John’s wort combats mild to moderate depression, delivering fewer side effects than those expected of prescription antidepressants. It may work as well as many of those antidepressants, such as Prozac and Zoloft. While scientists still aren’t sure exactly how it works, they believe it helps make the “feel-good” chemicals in the brain — serotonin, dopamine and norepinephrine — more readily available (x).

Individuals who take St. John’s wort use it primarily to alleviate depression’s symptoms, which include fatigue, anxiety, insomnia and appetite loss. However, health-care practitioners have used it to treat a wide range of conditions, including attention deficit hyperactivity disorder (ADHD), obsessive-compulsive disorder (OCD), seasonal affective disorder (SAD) and even menopause.

St. John’s wort has also shown efficacy in improving mood in people suffering from SAD, or “the winter blues” — a seasonal disorder that causes depression during the winter due to a lack of sunlight. While using a lightbox is the usual prescribed treatment, some research shows that St. John’s wort may offer better results than phototherapy alone (x).

Since early civilization, people have used St. John’s wort to treat cuts and scrapes because it offers antibacterial and anti-inflammatory benefits. Applied topically, it can soothe minor skin wounds and irritations, such as eczema (x). It may also provide natural relief from hemorrhoids.

Somatoform disorder is a psychological one in which an individual becomes preoccupied with physical symptoms with no physical basis. It can be extremely disruptive to daily life.

St. John’s wort can help suppress the anxiety somatization causes by rebalancing brain chemicals such as serotonin without producing the unwanted side effects of many prescription medications (x).

Chronic fatigue syndrome (CFS) is a complicated and debilitating condition with many causes. It can result from a virus such as Epstein-Barr or from an autoimmune disorder such as multiple sclerosis. Depression, excessive stress and/or adrenal fatigue may cause it, too. St. John’s wort can be an effective treatment for chronic fatigue, in some cases more so than prescription medication.

Women all around the world experience premenstrual syndrome (PMS). Aches and pains, mood swings, disrupted sleep, fatigue and a loss of mental focus are all common symptoms of PMS. Because St. John’s wort has such a positive effect on mood, it may be an effective treatment for PMS symptoms, including depression, hormonal imbalance and chronic fatigue (x).

Menopause causes all sorts of unpleasant physical, emotional, and psychological symptoms. Studies have shown that St. John’s wort can alleviate many menopausal symptoms and improve the sense of sexual well-being (x).

St. John’s Wort as an Antidepressant

Everyone feels down from time to time, but signs of clinical depression include persistent sadness, anxiety or feeling “empty” inside. The loss of interest or pleasure in activities once enjoyed is another symptom. Disrupted sleep is a common sign of depression as well and can show up in the form of insomnia, waking very early in the morning or needing too much sleep.

Other signs of clinical depression include appetite changes and unintentional weight gain or loss, fatigue, restlessness or irritability, frequent bouts of crying or being unable to cry and feeling “numb,” guilty, hopeless or pessimistic. Concentration difficulties, as well as physical aches and pains, may also be a problem (x).

Sometimes causes of depression are clear; the death of a loved one or divorce. At other times, determining causes is much more difficult. Hormonal changes — such as those menopause and childbirth cause — can cause depression. Depression sometimes has a genetic link — it can run in families.

The body needs adequate calcium and magnesium and healthy digestion for St. John’s wort to be effective. Researchers have studied the effects of it and know quite a bit about its short-term effects, but less about what it may do over the long term. St. John’s wort is not a magic bullet and will not cure everyone’s depression. People with clinical depression should not use this herbal supplement as an excuse not to visit the doctor or to stop taking a prescribed antidepressant.

Depression can increase the risk of suicide, so it’s always best to talk to a doctor whenever it leads to suicidal thoughts.

Some have reported side effects similar to those antidepressants such as Prozac cause — vomiting, dizziness, anxiety, panic attacks, amnesia and aggressive behavior. Note that these side effects are more commonly reported with prescription medication than with St. John’s wort. Also worth noting is that St. John’s wort has a low potential for addiction (x, x).

The combination of St. John’s wort with certain antidepressants can cause serotonin syndrome, a potentially dangerous condition. Serotonin is a neurotransmitter, a chemical used to send signals between nerve cells. It’s necessary for and essential to good health. But an excess can cause serious side effects such as seizures and irregular heartbeats. That said, prescriptions aren’t 100 percent effective either, and many have undesirable side effects (x).

It’s important to note that St. John’s wort interacts with several other medications. It should only be taken under a doctor’s supervision if you’re already taking antidepressants or other medications for anxiety and/or depression.

St. John’s wort supplements come in multiple forms, including powder and capsule form. When using St. John’s wort powder, take 600 mg one to two times daily. If a doctor suggests a different dosage, it is best to follow their instructions.

When taking St. John’s wort capsules, take one 600 mg capsule one to two times daily. And, of course, be sure to talk to a doctor before adding this supplement to your regimen.

If you have mild to moderate depression, St. John’s wort may be an effective natural alternative to chemical antidepressants for you. In addition, this herbal supplement offers relief to other complex conditions including chronic fatigue, PMS and menopause.